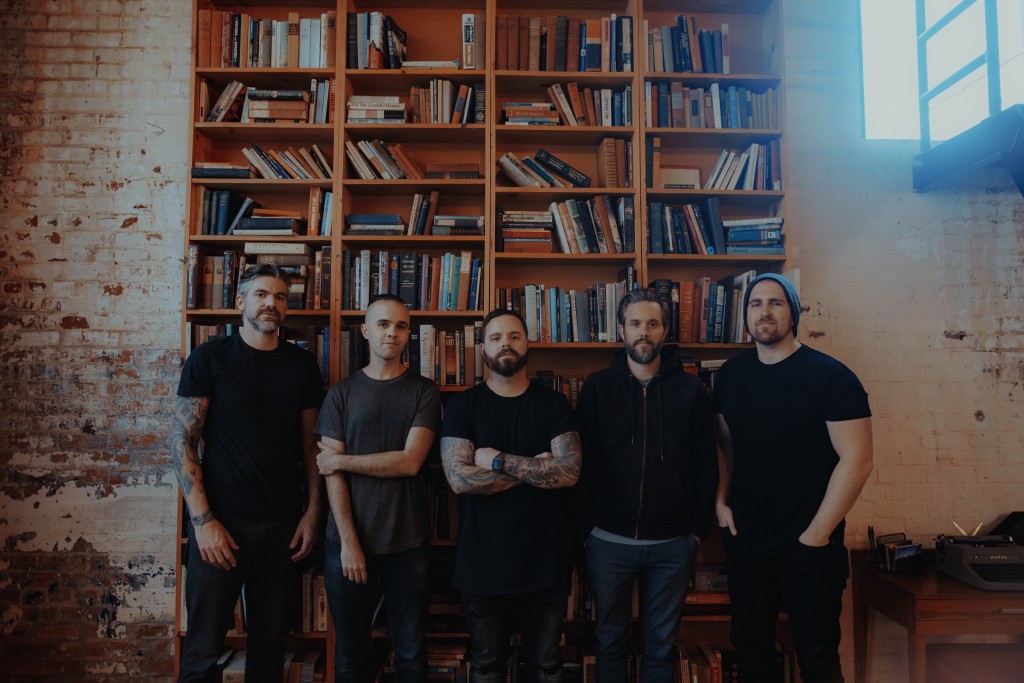 Between the Buried and Me // Photo by Juan Pardo

In the 20 years since their founding, North Carolina progressive metal act, Between the Buried and Me, has released 10 LPs, and an insane amount of EPs and singles. Each recording sees the band pushing the limits of heavy music, blurring the lines between hardcore, metal, progressive rock, and blues. This year, BTBAM celebrates their 20th anniversary, and as part of the celebration, they’re reissuing their debut, self-titled album—originally released on Lifeforce in 2002, and again on Victory Records in 2004 and 2012—as a remixed and remastered LP.

I hopped on the phone with one of the band’s founding members, guitarist Paul Waggoner, to talk about the lasting impact of their debut release.

The Pitch: This is the third label this album has been on, yeah?

Paul Waggoner: I really hadn’t thought about that. You’re right: this album has made its rounds, for sure.

When this record first came out, did you anticipate it having the legs that it has?

Well, no. I mean, that album—and just our career in general—we just had no idea that we would still be doing this, much less the fact that we would be re-releasing that album 20 years after it was originally created. So, absolutely not, to answer your question. I mean, never in a million years would I think we would even be having this conversation.

What I really find fascinating about the whole thing is that not only is Craft Recordings the third label the album’s been on, along with it being remixed and remastered, but three of the songs that are on this go all the way back to your first-ever recording: your first demo. Which of those original three songs has seen the most change in those years?

Which three songs was that, even? It was “More Myself to Kill,” “What We Have Become,” and “Useful Weapon”? I’ll say “More Myself to Kill,” because that’s the one song that we have still occasionally played live all these years, and we kind of have manipulated it a little bit live, as well. So, not only does the song sound different on the record than it did on the original demo, but it also has kind of a different form live, as well, because it’s different guys playing it.

Tommy [Giles Rogers Jr., vocals] and I are the only ones that work that are still in the band from that era, so you’ve got different musicians playing it and then, as I said, we kind of tweaked it a little bit. We’ve slowed some parts down. We’ve sped some parts up. We’ve kind of made it a little more – we’ve polished it up in a sense because back then, we didn’t record to a click track or anything. We recorded that album live, which a lot of people don’t realize. We all recorded simultaneously on the demo and on the self-titled record.

I don’t even know how to describe that experience. I mean, at the time it didn’t seem that weird, because that was just sort of the way bands recorded back then. Now, we have our live shows programmed. We have a light show that’s programmed to a click track and so, in order to do a click track for that song, we had to change the tempos, so that it actually made sense. What’s saved “More Myself to Kill” is that it has definitely gone through the most evolution over the years.

Also, I think there’s something about it. We just played that song live on some of the overseas touring that we did and even after all these years, that song personifies what we were as a band back then: we’re all over the place, right? I mean, we had hardcore parts, we had death metal parts, we had almost emo sounding parts. We were just kind of trying to do it all. We didn’t really know what we were yet and that song, I think, encapsulates that that spirit, if you will.

What I have noticed about BTBAM’s fanbase is that it seems as though people there are people who like you as a band, and then there are folks who like you for the different aspects. As you broke that song down, it’s got all these different elements to it and now, you have progressive elements and things like that, so I think it makes sense that the song that you’ve been playing live all of these years is the song that has all of these different changes.

Speaking from a kind of a fan perspective – which obviously is disingenuous, because I don’t really know what their perspective is – but my guess is that, on every album of ours, there’s some song that is emblematic of the album. For Colors, maybe it’s “White Walls” – again because it has a little bit of everything. If you had to pick one song that is representative of us as a band on that specific album, maybe it’s “White Walls” for Colors, maybe, and then “More Myself to Kill” for the self-titled, and for The Silent Circus, it’s “Mordecai.”

There’s always that one song that seems to be a little more prevalent in the consciousness of the fans. I think that’s just kind of unique. It’s kind of a phenomenon, to some degree but I guess – in a way it kind of makes sense.

You mentioned the fact that you and Tommy are the only two original members remaining. How does a band changing members allow you to evolve and change more than it might, otherwise?

Oh, a hundred percent. Even though Tommy and I are kind of the constants, if you will, once Dustie [Waring, rhythm guitar] Blake [Richardson, drums] and Dan [Briggs, bass, keyboards] joined the band, we all of a sudden had this even broader spectrum of influences. That was kind of the band’s identity anyway, but we just kind of ramped it up and we turned that up to 11.

For Tommy and I, the purpose of the band when we started back in 2000 or whatever was, we wanted to be a very diverse sounding band. We wanted to take risks. We wanted to incorporate all of our musical influences, which we did, but then once we kind of got some fresh blood in the water, so to speak, it just became even more intense. Dan brought this whole other classic prog influence to the table and Dustie brought a more like a more bluesy kind of feel to his guitar playing, and Blake brought like a whole other technical element to the drumming.

We just brought more to the table I think and so, yeah, adding those guys to the band really gave us a lot more longevity, really, because we were able to feed off more inspiration and more influence, so that was huge.

The remix thing and remastering on this reissue was done by Jamie King, who originally produced it. How much input did you all have into that process?

We actually kind of took more of a backseat to it because, obviously, you’re just like any fan. Every album, you’re like, “I wish I would have done this different or that different” and “I wish this sounded like that” or whatever. You can really go down a pretty slippery slope with the opportunity to remix – I mean, hell, we might want to retrack it – so we tried to take a backseat and just say, “Hey, Jamie, just do your thing.”

He knows the band. He knows what kind of sound we like and he also knows the identity of those albums. He understands what maybe we wanted it to sound like, to begin with, so we just let him do his thing and he would send us like references and we would listen to it. Again, we tried not to nitpick too much. We were looking at it from an overarching, generalized quality to what he was doing, rather than nitpicking every little part, and pretty much right off the bat, I think everybody was was pretty happy with it.

I think he just kind of polished it up a little bit, but they still kind of retained that that vibe that’s representative of us at that given time, so I think it’s a good balance of kind of keeping the overall spirit of the album.

What was the experience like, sitting and listening to this album that you recorded almost 20 years ago?

There’s definitely a surrealness to it. The biggest thing I get out of it? I’m not like analyzing the music or even the mix so much, because we’re just different musicians now. We’ve just evolved and we’re different people, too, but the one thing that I really get out of listening to the self-titled is just the nostalgia of being that kid.

It just took me back to those times and of course, at that time, we had no frame of reference and we didn’t even know we were gonna write another record. We were just we were kids, just weekend warriors playing shows when we could and just chasing a dream that that may have never yielded anything. So, it really just takes me back to that time in my life and that’s what puts a smile on my face.

Even now, when we play “More Myself to Kill” live, I can’t help but just think about where I was, and I can almost visualize Tommy and I like writing those riffs in our apartment in Raleigh, North Carolina. Musically, it’s hard to really relate to that material, with where we are now, but I do find it pretty easy to relate to that person because I can almost visualize where I was when we were making that album.

Between the Buried and Me’s self-titled LP is out as a remixed and remastered LP from Craft Recordings this Friday, May 15.

Categories: Music
Tags: between the buried and me, craft recordings, interview, paul waggoner