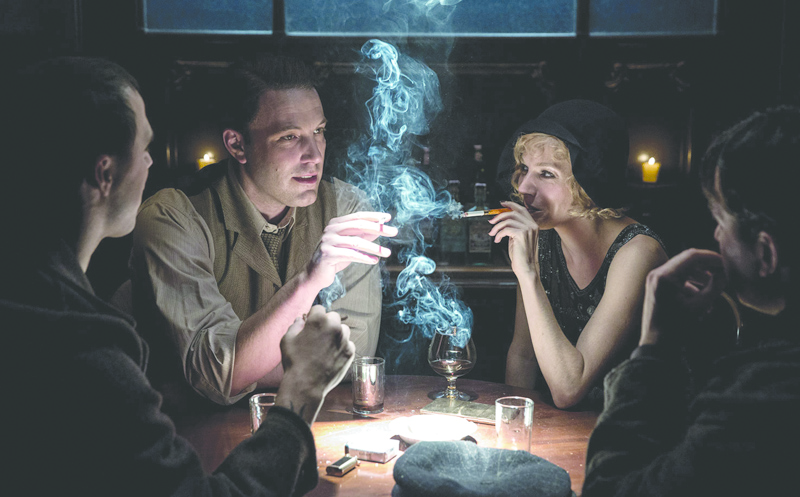 From the flamboyant flapper dresses and the elegant suits of its Prohibition-era setting to the rich locations of Boston, Tampa and, eventually, Cuba, the sensuous appeals of Dennis Lehane’s 2012 novel, Live by Night, would be obvious to any filmmaker. The one who has brought the book to the screen is Ben Affleck, whose previous films as a director (Gone Baby Gone, The Town, Argo) boast a propensity for suspense to go with a good instinct for source material. But he trips over a murky script and a bland lead performance, and his expensive gangster thriller emerges as a pointless exercise in elaborate Hollywood production design.

And because Affleck wrote the script himself and also plays the lead — self-described outlaw Joe Coughlin — he has no one but himself to blame. Neither do we.

As Live By Night opens, Affleck’s Joe addresses us, his world-weary, noir-tinged voiceover just a register above his gravel-voiced Batman. Over a montage of World War I footage, Joe tells us that he survived the horror and came home a disillusioned man. But nothing in the actor’s two-dimensional performance convinces us of this. (Like Brad Pitt in another recent period bore, Allied, Affleck gets some “help” looking younger from a distracting CGI polish that distances him even further.)

Joe is then rushed through all kinds of scenarios, none of them leaving much of an impression. Even though he’s son of a Beantown police chief (Brendan Gleeson), he robs a high-stakes poker game and runs with the Irish mob. Then he falls in love with the boss’s girlfriend (Sienna Miller), robs a bank, gets sent to prison and gets out. You’d be forgiven for thinking that all of this early plotting feels like an overlong introduction, because Joe suddenly finds himself in another situation entirely — working for Italian mobsters in Tampa with his pal Dion (Chris Messina, doing his best to inject some much-needed comic relief).

When Joe falls in love with Cuban expat Graciela Suarez (Zoe Saldana) and cuts a deal with a local sheriff played by Chris Cooper, Live by Night finally seems to be getting somewhere. But it still comes to life only intermittently. Other than one extraordinary car chase and a subplot in which Joe stands up to the Ku Klux Klan — part of the story that takes on unintended relevance in 2017 — there’s rarely any feeling of urgency. Even the steamy love scenes with Saldana land with a thud, coming off more like the obligations of late-night cable softcore than character-driven encounters.

The lack of a consistent tone or theme continues right through to the end, as Elle Fanning is introduced as a saintly evangelical leader. She somehow amasses a huge, loyal following out of nowhere, and the movie shifts gears again in its final 30 minutes.

Live by Night is a handsome production. Its art direction and costuming create the illusion of the 1920s and ’30s nicely. And three-time-Oscar-winning cinematographer Robert Richardson shoots it all in gorgeous fashion. But like Affleck’s Joe Coughlin — the empty center of this soulless film — Live by Night never commits to its most promising elements, never stays in one place, never develops a rhythm. Affleck’s frustratingly episodic script seems better suited to a longer format. With a miniseries, he’d have had time to properly develop Lehane’s characters and his plot, and the results might have felt more organic. As it is, the movie plays like a two-hour trailer for that phantom series — one from which the excitement has been carefully redacted.