Behind the scenes at Ferran Adrià’s Nelson-Atkins dinner 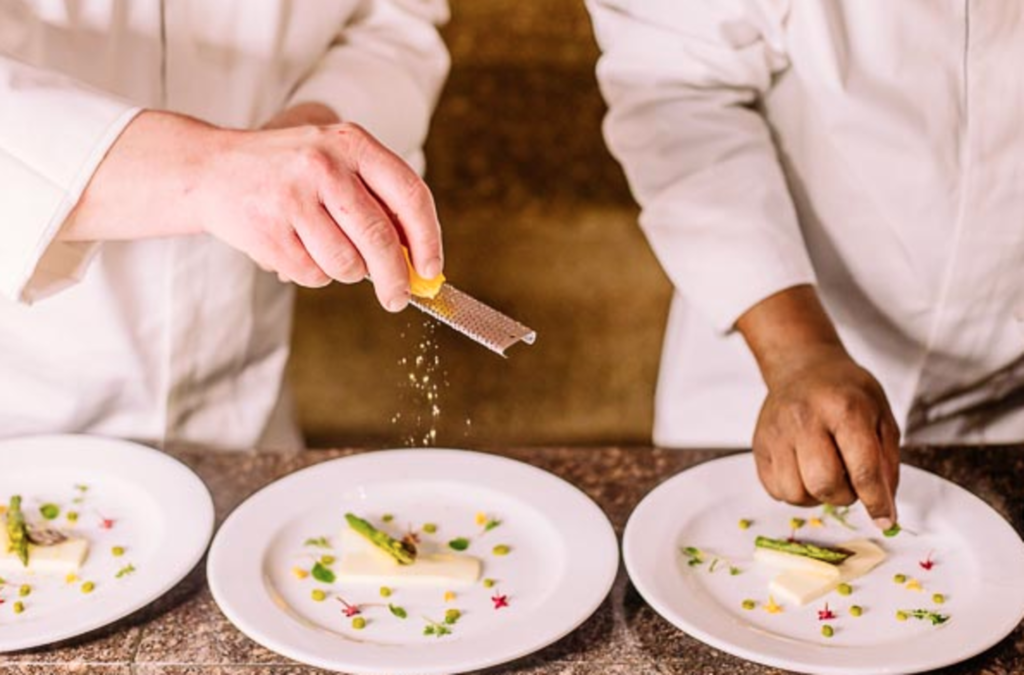 At 5:37 p.m. Monday, in Rozzelle Court’s grand atrium at the Nelson-Atkins Museum of Art, some 16 servers were furiously polishing what seemed to be an endless supply of heavy silverware. The metal clanked together in a constant melody, accompanying another team of servers racking glassware up from the kitchen. In another corner, the museum’s kitchen crew plated tray after tray of delicate appetizers: ahi tuna on wonton crackers with crème fraiche, beef carpaccio on fingerling-potato chips, prosciutto roulade with foie gras mousse on sliced brioche.

Far removed from this ballet, in another part of the museum, Spanish master chef Ferran Adrià – formerly of the Michelin-starred restaurant elBulli and founder of the el Bulli Foundation – was in the middle of delivering a presentation on the intersection of creativity and cooking to a sold-out audience.

The evening was the centerpiece of the museum’s exhibition Ferran Adrià: Notes on Creativity, the Drawing Center’s traveling show of Adrià’s creative practice. Following Adrià’s presentation, 27 guests would join him in the Cloister, a small room adjacent to Rozzelle Court, for a 10-course dinner put on by 10 of Kansas City’s top chefs. 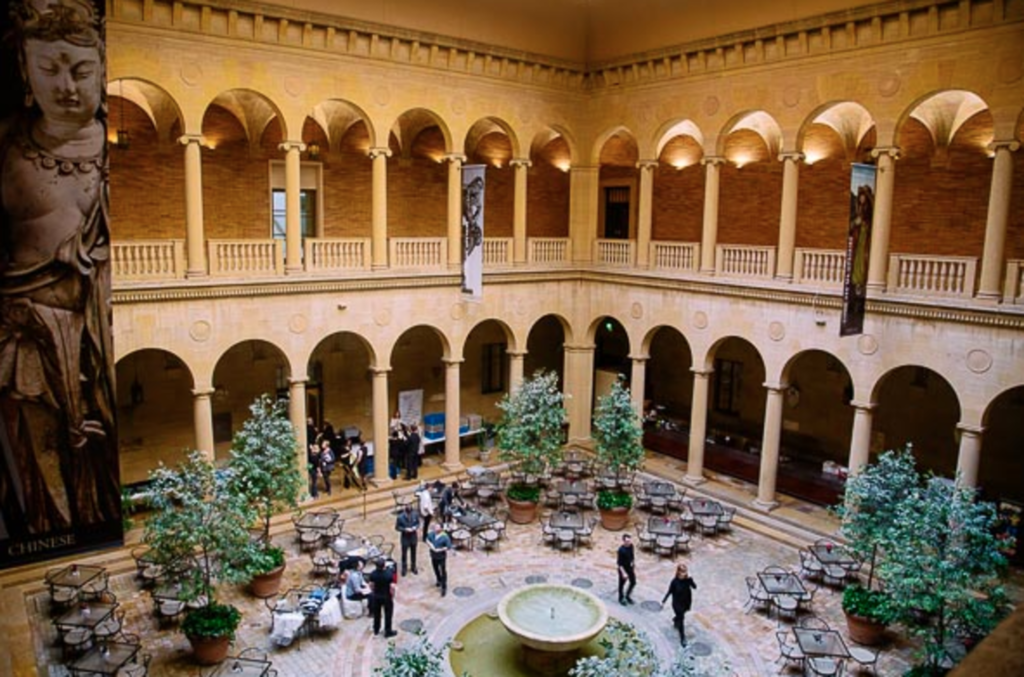 The local chefs – Jonathan Pye of the Nelson, Michael Corvino of the American Restaurant, Michael Smith of Michael Smith Restaurant and Extra Virgin, Jennifer Maloney of Café Sebastienne, Ted Habiger of Room 39, Debbie Gold of Stone Soup Consulting, Carl Thorne-Thomsen of Story, Howard Hanna of the Rieger Hotel Grill & Exchange and Ça Va, Ryan Brazeal of Novel, and Megan and Colby Garrelts of Bluestem and Rye – were set up between the downstairs kitchen and the spacious Rozzelle Court, where most of them would do their plating.

By 6:30, the dinner – which wasn’t scheduled to start until 7:30, after the guests and Adrià had taken their seats – was already running behind. Adrià’s discussion had not yet concluded, meaning that the cocktail hour to follow was yet to begin. Leaders at the Nelson were glancing at their watches and eyeing their schedules.

“He’s running long,” a woman holding a clipboard said. “Has anyone asked him to wrap?”

A few minutes later, lecture attendees began to filter out and descend upon the appetizers and the multiple bars, including the station where Ryan Maybee – co-owner of the Rieger Hotel Grill & Exchange and J. Rieger & Co. whiskey – was mixing green-apple-and-pistachio-infused Rieger whiskey with Cocchi Americano and Barbadillo Amontillado sherry. 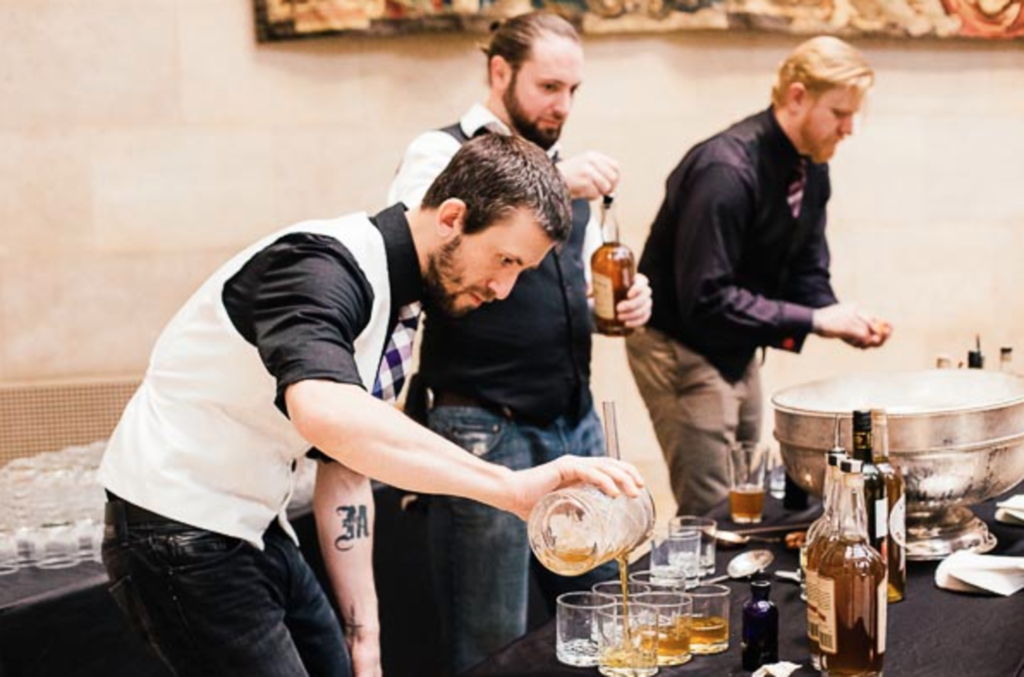 For the most part, the hungry crowd seemed divided between the newly Adrià-inspired (“That was fucking incredible”) and the Adrià-baffled (“That went over my head about halfway through”).

The transfixed and the puzzled alike swarmed Adrià as he entered Kirkwood Hall and obliged the many who wanted a moment, a word, a handshake, an autograph or a photo. This was as close as I got to Adrià. Instructions for the press and the serving staff had been clear: We would not be allowed in the Cloister, where the 10-course dinner would be served, and we would not get to bother the master chef. 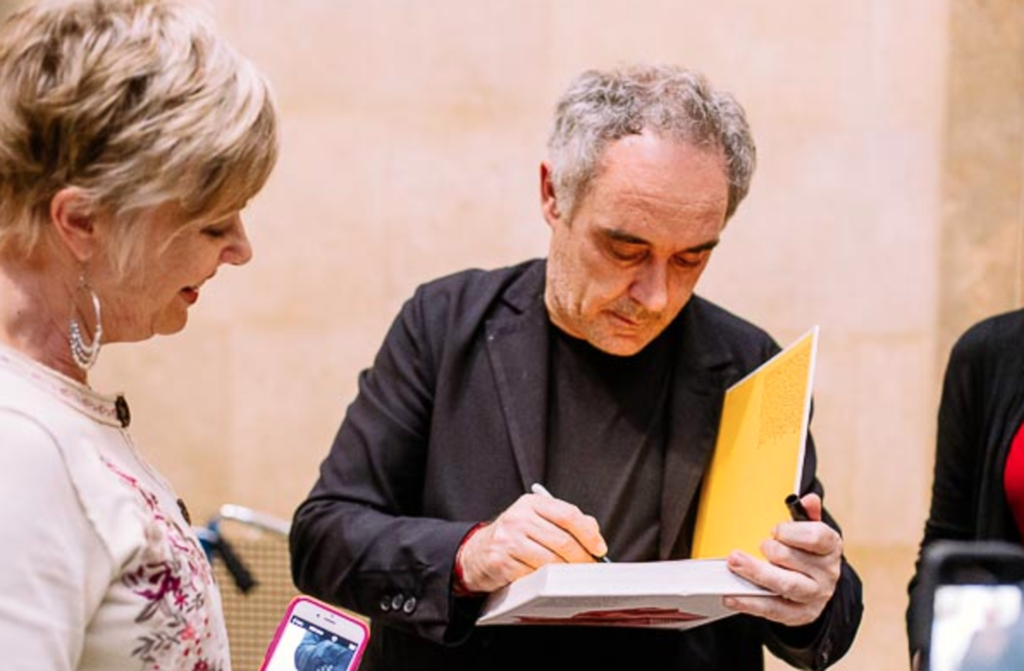 From a few feet away, as surreptitiously as I could, I studied Adrià. His eyes crinkled good-humoredly when he smiled, which was often, and the rich lines of his face made him seem simultaneously serious and amiable. He gave off youthful energy.

At 7:12, in Rozzelle Court, chefs and their teams were leaning against pillars, crossing and uncrossing their arms, scrolling on their phones. Servers, who had caught up on their opening sidework, stood in huddles around various tables, snacking on bags of potato chips lifted from the Nelson’s snack stand. Pye’s team was plating the first course, an artfully geometric arrangement of asparagus, preserved egg yolk and citrus chevre; next to him, Corvino’s crew was readying the second course. Across several tables, Smith began to plate the third course, a Hamachi-and-tuna ceviche. 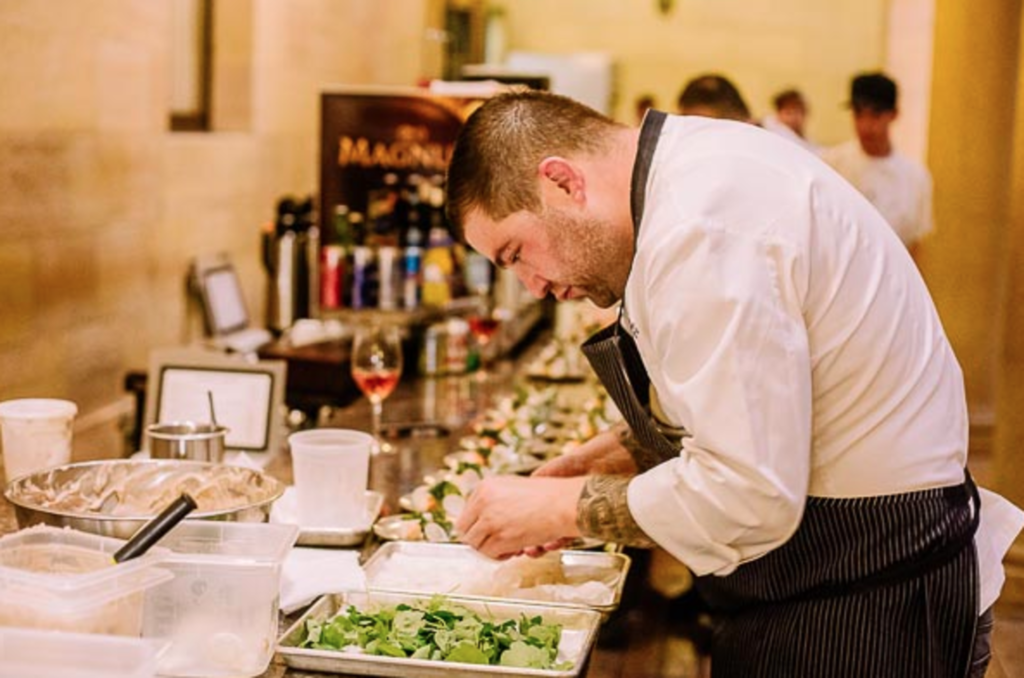 At 7:27, after the first course had gone out, Corvino swiftly assembled his course, which the menu described simply as “king crab, chicken liver, turnip, nasturtium.”

“It’s a seemingly very simple dish,” Corvino had told me a few days earlier. “There’s not a lot of components to it. But my goal was to take something traditional that I don’t do very much, which was surf and turf, meat and fish. I’m doing a mousse with the chicken liver – we cook it very slowly, like, three different times, straining out the graininess of the chicken livers and whipping it up after it cools down over ice. It gets this extremely luxurious texture.” (I sneaked a taste later in the evening. It was like silk.)

Corvino’s dish looked like an exceptionally modern, upscale take on sashimi, in hues of seaweed green, pale pink and translucent whites. While his plates were being carried into the Cloister, Habiger and Hanna were busy prepping their own dishes – the fifth and eighth courses, respectively – in the kitchen a floor down.

“Has anyone seen a spider?” Habiger asked as he coated pingpong-ball-sized spinach-and-fresh-cheese gnudi in herbs and flour.

“No,” Hanna replied with a laugh. No such strainer was in evidence. “But we’ll need one, too.” 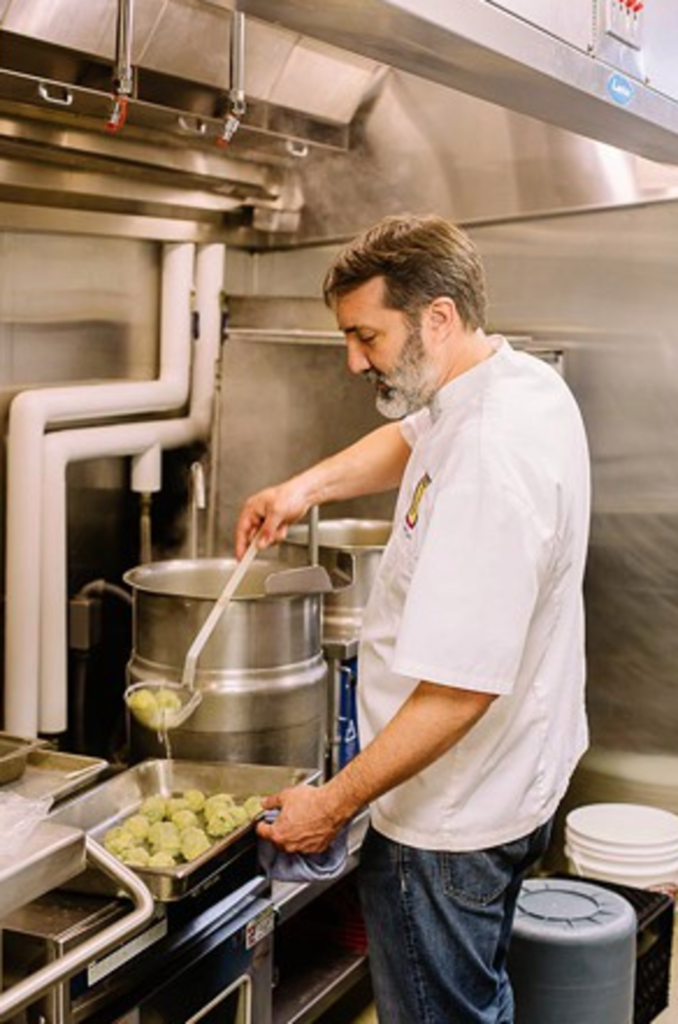 Around the corner, Maloney was filling a rolling rack with her ingredients: fresh nasturtium flowers from Crum Heirlooms farm, delivered to her that afternoon, their centers filled with whipped, mango-infused sheep’s-milk cheese; 4 gallons of a pale-yellow coconut-ginger broth; containers of microgreens; and cubed mango pieces. 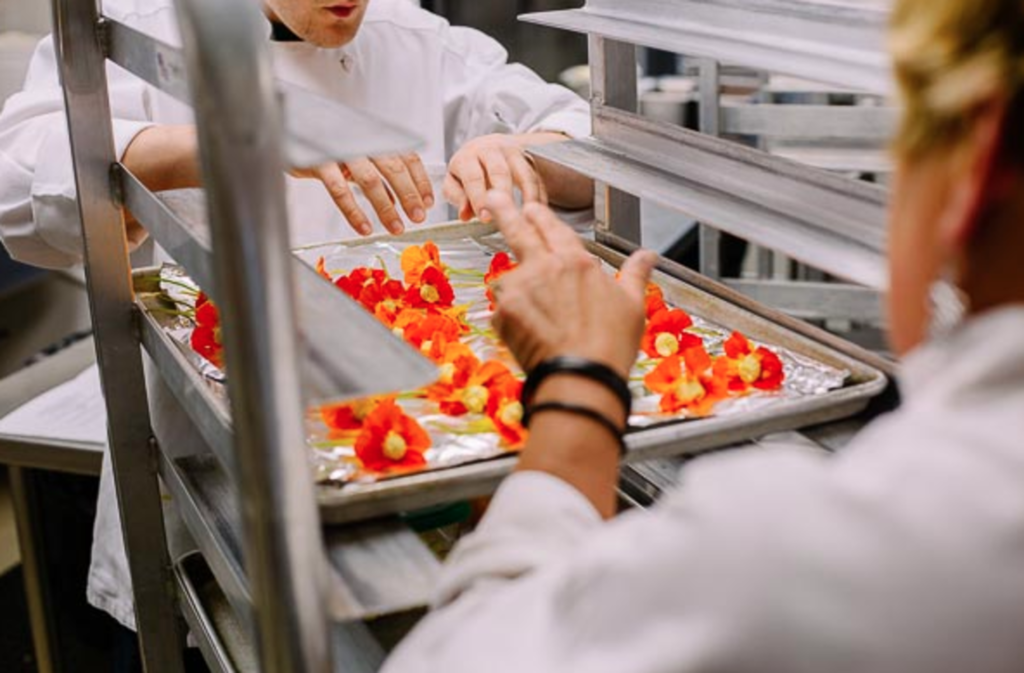 “Hot food coming through!” she called, rolling the rack through the kitchen doors to the service elevator. Upstairs again, the third course – Smith’s – had just gone out. It was 8:14 p.m.

“Eat, eat, eat!” Smith called enthusiastically to the servers, who had been glancing furtively at the extra plates of his colorful assembly. “I made extra for you guys to eat!” 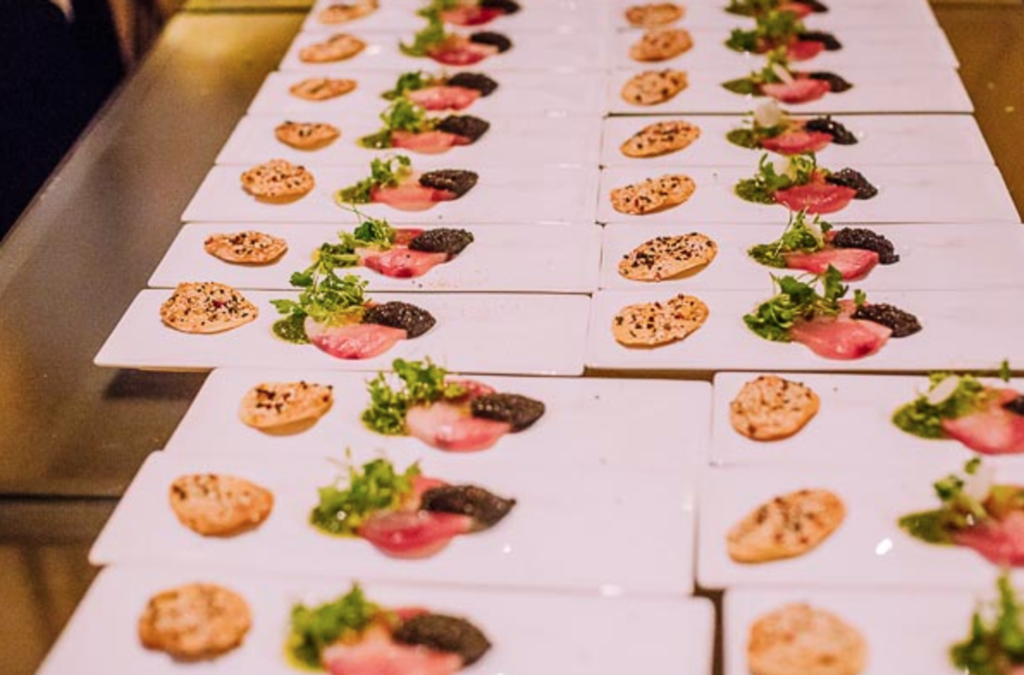 By 8:34, Maloney’s course – the fourth – was plated and gone, and Habiger was taking his place for his dish. At 8:54, his gnudi went out: heavenly looking lumps of cheese and pastry, dotted with cubes of lamb pancetta. Maloney, who had assisted the plating, offered a tray of the lamb bites to the general populace; she stood on the Rozzelle Court steps as eager fingers scooped out handfuls of bacon. (It was delicious.)

At 9:01, Gold was at her station, carefully placing duck eggs, from which a top piece had been cut out, into a shallow pan filled with hot water. For the first time in the evening, a hush came over the staff; Gold was cooking her eggs in fast batches. 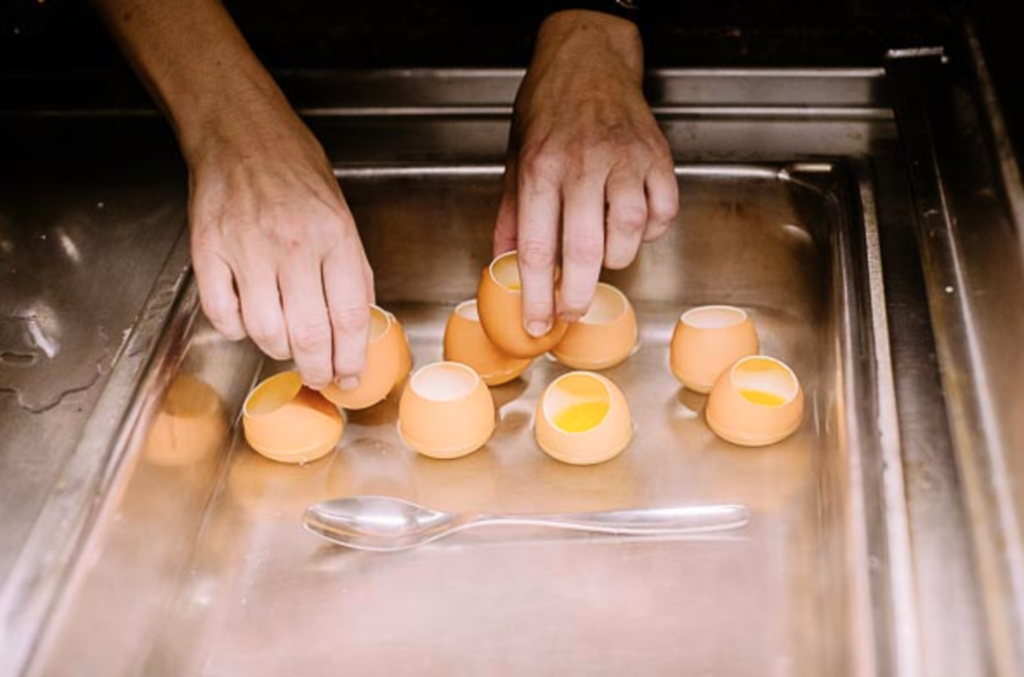 An assembly line of six fellow chefs, including Maloney and Habiger, helped her top the over-easy duck eggs with sea salt, sunchoke puree, chocolate and coffee crumble, lightly whipped cream, sherry vinegar, a sunchoke chip and microgreen. This was the most intense plating of the dinner, and Gold was palpably relieved when, by 9:10, her course was out.

“Chef, are you happy?” one of the servers asked Gold as she pushed her glasses up.

Gold’s dish was the dinner’s smallest, served in egg holders with a tiny spoon, and 15 minutes later, Thorne-Thomsen’s dish – a Wild King salmon entrée – followed. By 9:49, Hanna was assembling his plates. His transport from the kitchen to Rozzelle Court complete, he stood slicing a long cylinder of smoked rabbit wrapped in bacon. At 10, his course went out, each plate bearing two rosy pink circles of rabbit loin with dumplings and spring snap peas. It looked like something from a fairy tale, and, as Rieger general manager Tony Glamcevski and I split one of the extra plates, I decided that it tasted convincingly like a happy ending. 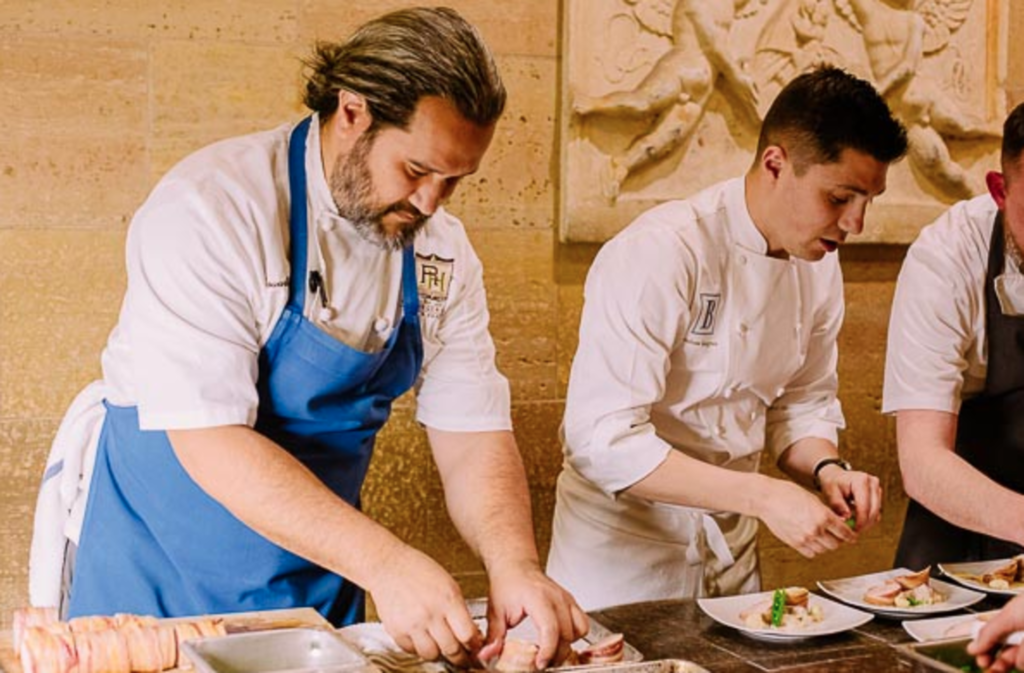 “Here, take a bite and try it with the Nebbiolo I paired it with,” Glamcevski said, offering me his glass. “The wine makes the food taste even better.”

He wasn’t wrong, and by 10:12, the extra rabbit and leftover Nebbiolo were both gone.

Ten minutes later, Brazeal and Megan Garrelts were plating their courses in opposite corners of the room. Brazeal’s dish – the ninth course – was the only one to feature beef: a stunningly rare sirloin from Windhaven Farms, with braised short rib and a rice-noodle spaetzle.

By 10:31, Brazeal’s high-level comfort food had gone out, and he offered up a mountain of extra steak to the staff. My scavenged forkful of the short rib was packed with intense flavors, which the chef clarified were lemongrass, chilies, thai basil and fish sauce. 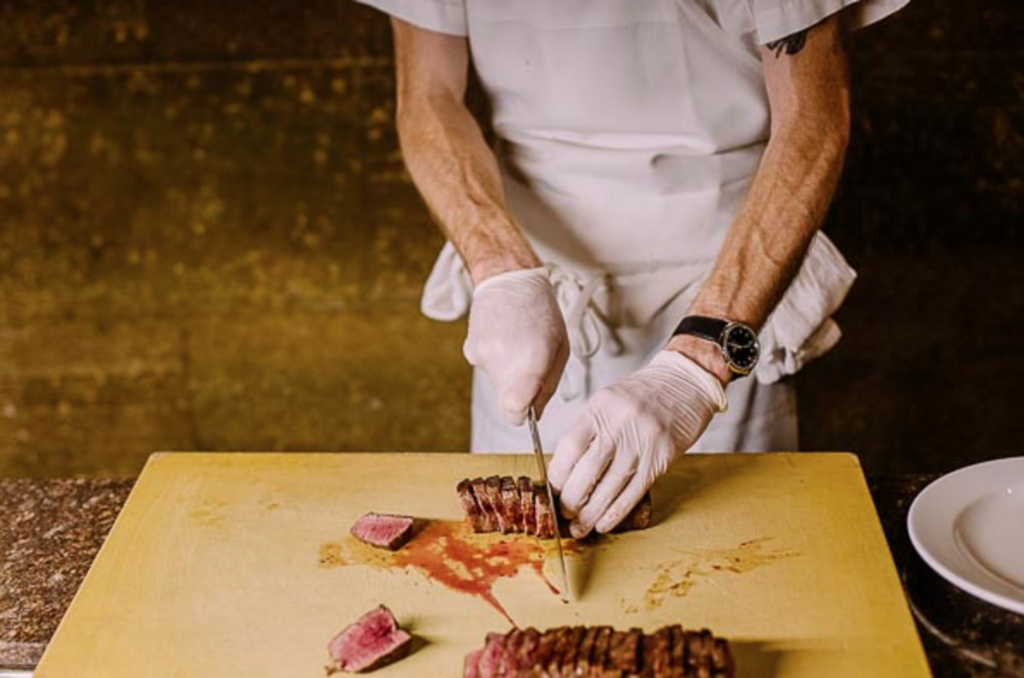 At this point, the numerous tables in Rozzelle Court were littered with empty wineglasses and finished wine bottles, plus utensils and phones and menus and plates.

“It looks like a fucking frat party over here,” one of the servers said, passing by a particularly messy area.

At 10:53, just as Megan Garrelts was finishing her desserts, I made my exit. Her plating was so beautiful, so whimsical – a high-fashion version of crème caramel, with a swoop of caramel, sesame seeds, strawberry, rhubarb and lemon – that I knew there would be no leftovers. I walked out of Rozzelle Court, past Maybee setting up his disgestivo cocktail – a bitter coffee cordial with cream – and heard the clinking of glasses and the clacking of plates behind me. 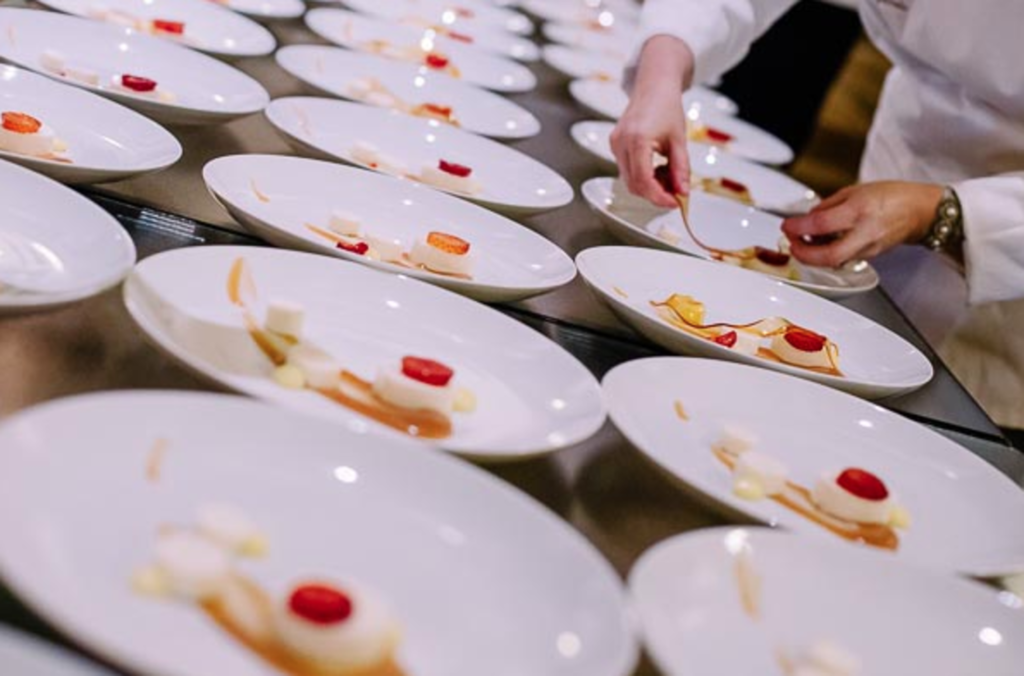 “Those kinds of dinners are once-in-a-lifetime moments in a chef’s career,” Megan Garrelts told me the morning after the event. “I think I can speak for everyone when I say that. I don’t think anyone expected Ferran Adrià to come to Kansas City, and I think it’s great that we have enough representation between the arts and food community to show what we have, and that it’s not a secret anymore.”

All 10 chefs carried out the final course, Garrelts said, and when they entered the Cloister, Adrià stood up and applauded them all.

“He was kind and sincere in the way he greeted us,” Garrelts said. “He hugged and kissed us all, and he signed all our menus and the cookbooks we brought. We didn’t have the common language between us, but food is a better language.”