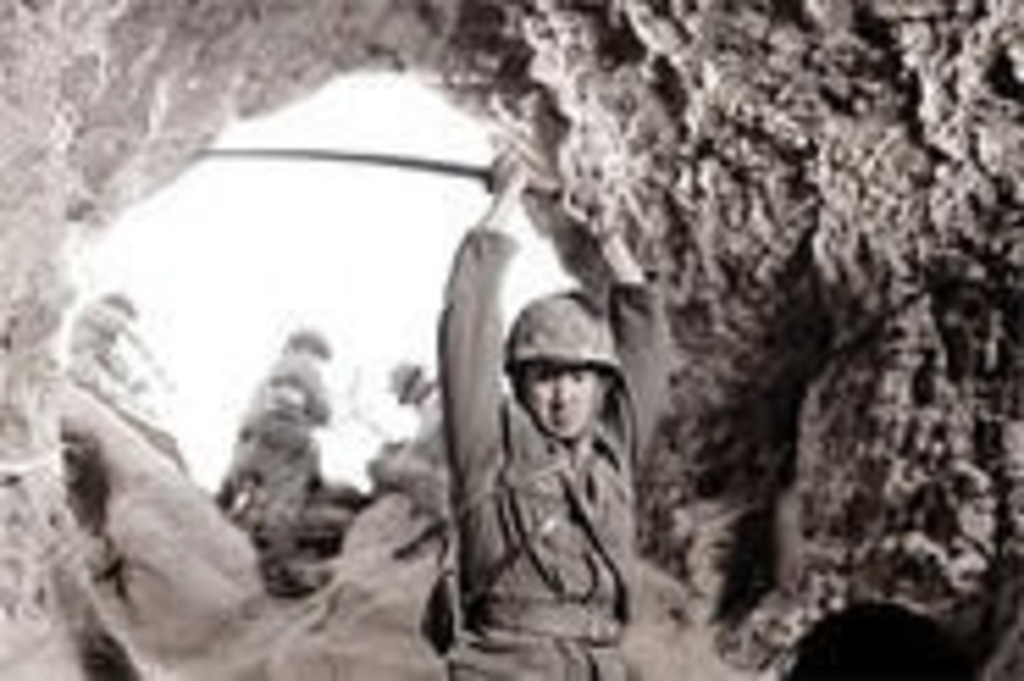 In the new Clint Eastwood movie, ordinary young men are drafted into a war that many of them do not fully understand. There, on an island called Iwo Jima, they fight against an enemy who has been demonized by wartime propaganda — a supposedly brutal oppressor with a taste for torture. At each step of the way, they are reassured by their superiors that they are doing what is right. The movie is Letters From Iwo Jima, though the same description applies to Eastwood’s previous film, Flags of Our Fathers, which told much the same story, except that the young men in that version were called Joe, Ira and Hank, and here their names are Saigo, Nishi and Shimizu.

This simple act of mirroring can’t help but seem provocative in a movie released to a nation at war. But in Letters, as in Flags, Eastwood seems less concerned with provocation than with contemplation of a popular military campaign and its supposed days of glory. The second film completes and deepens the first, yet to view them side by side is to see not two sides of a coin but rather two distinct panels in a diptych — one rendered with the disquieting Americana of an Edward Hopper canvas, the other with the patient brush strokes of a byobu screen. Whereas Flags fanned out over several decades to show the long-range impact of World War II on men who shuddered at the thought of their generation’s purported greatness, Letters narrows its focus to Iwo Jima and those thousands of Japanese troops who endured weeks of food shortages and dysentery, only to perish in hails of bullets, or impaled by their own swords.

Eastwood, who directed Letters from a screenplay he commissioned by first-time Japanese-American screenwriter Iris Yamashita (a research assistant on Flags), seems awestruck by the dogged perseverance of the Japanese, who dug in their heels on the volcanic island by way of an elaborate network of tunnels and underground caves, and who continued to fight to the death even when all hope was lost. Not surprisingly, he shows a special affinity for the Japanese Lt. Gen. Tadamichi Kuribayashi, who masterminded that defense and whose tender letters home to his family appear in the film as narration. Played by Ken Watanabe with the deadpan grace of Toshiro Mifune in his prime, Kuribayashi, who opposes the war in principle but will nevertheless sacrifice all for his country, emerges as exactly the kind of strong but sensitive man of action that Eastwood himself has played in many of his later films. In Letters, he is surrounded by an army of similarly conflicted men (some fictional and some fact-based), from the lowly Pvt. Saigo (Japanese pop star Kazunari Ninomiya), who dreams of returning to the small bakery he ran with his pregnant wife before the war, to the regal Baron Nishi (Tsuyoshi Ihara), an Olympic horse-jumping champion who counts Mary Pickford and Douglas Fairbanks among his personal friends. In voice-over, we hear their letters home, too, nearly all of them of a piece in their lyrical candor (“Am I digging my own grave?” Saigo wonders to his wife) and their eagerness to discuss anything but the fog of war.

Letters From Iwo Jima isn’t the first wartime drama to suggest that to know thy enemy is to know thyself. William Wharton’s autobiographical 1982 novel, A Midnight Clear, for example, tells of a brief détente between platoons of American and German soldiers at Christmastime 1944, and last year’s sentimental French Oscar entry, Joyeux Noel, depicted a similar holiday hiatus on the battlefields of World War I. But the special power of Eastwood’s achievement is that, save for one indelible moment, the mutual recognition between sworn adversaries happens not onscreen but later, as we piece the two films together in our minds.

The exception comes near the end of Letters, after Nishi retrieves a folded-up note from among the effects of an American POW who has just died. The letter, from the dead soldier’s mother, closes: “Remember what I said to you. Always do what is right, because it is right.” It is Eastwood’s queasy triumph that, when we hear those words, regardless of what language we speak, they have rarely sounded more foreign.