B.B. King soaked up the love at the Midland last night 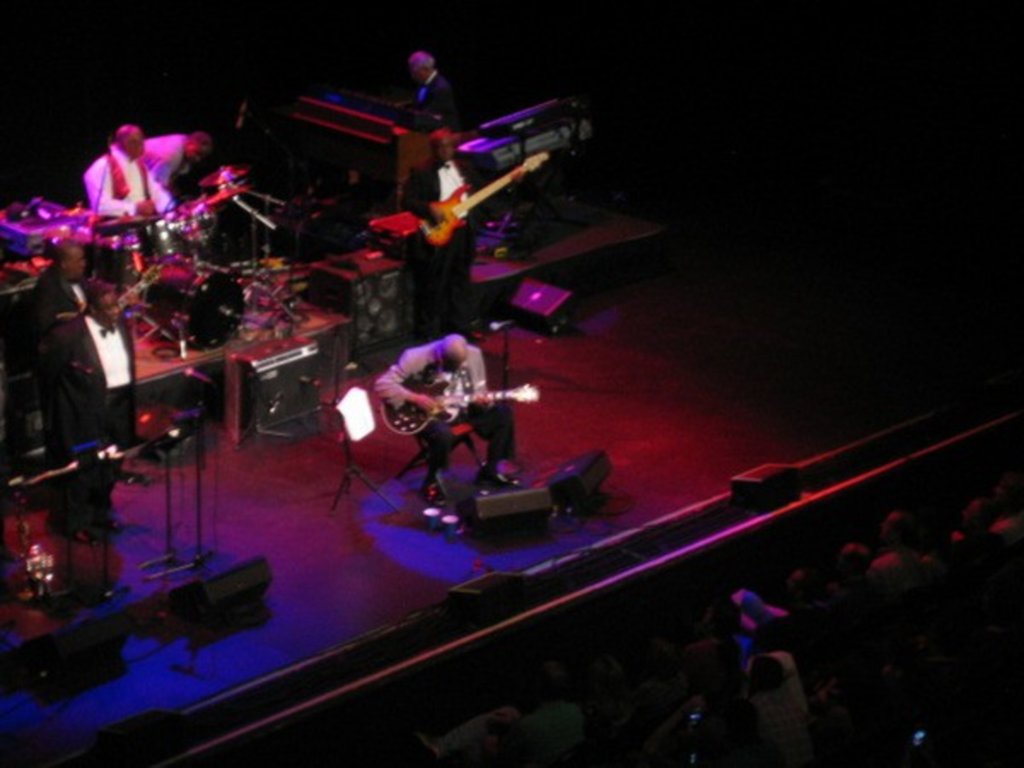 Every music fan – especially a blues fan – sets aside a little cash to make that “What if I never get another chance to see them?” show possible. And with so few musicians – especially blues musicians – making it to B.B. King’s accomplished 89 years, a mostly full theater of blues fans broke the piggy bank wide open for a chance to see him last night at the Midland.

For shows like the one last night, typical concert standards are a little different. From the “Man, it is so good to see him up there,” vantage, B.B. King didn’t disappoint. After his band stormed the theater with its blend of jazz, blues and R&B, King made his way to the front of the stage, looking fairly smart in a gray tuxedo jacket. King took a few minutes to absorb the love, and his band gave him time and space to get going. For a moment, it was enough to just breathe the same air.

Still, it took a while for the show to get started and, for that matter, to continue going. King tossed out a few tentative opening notes, discarded them, visited with the front row, and tried to get comfortable. For some reason, his mic was set up impossibly far from his chair, and as he worked to make it right, King joked “We’re gonna start this one in a minute.” Once the mic was fixed (sort of), King introduced his seven-piece band, including a three-member horn section. Still not quite launching into a song, King lamented, with a grin, “Every up here can do something but me.” It was a crucial reminder that the man is almost 90, for crying out loud.

He finally got situated, and with a few wonky licks, King launched into “I Need You So.” The B.B. King Blues Band is a treasure, clearly responsible for buoying up the parts that King can’t quite get to. After that opener, King headed back into “I Need You So,” and the band gamely followed. King played what he wanted to, and he stopped when he wanted to.

That strategy yielded a show that was fun, but more than a little bumpy. When King was on – as when he suddenly accelerated into “The Thrill is Gone,” for instance – there were flashes of the B.B. of old, and his fingers worked Lucille like he knew her well. When he lost the thread, though, songs like “Rock Me Baby” wound up abbreviated, even with King hauling out the best ever “Seated hip shake – nonagenarian division.” Toward the end, it wasn’t at all clear where B.B. was going next. 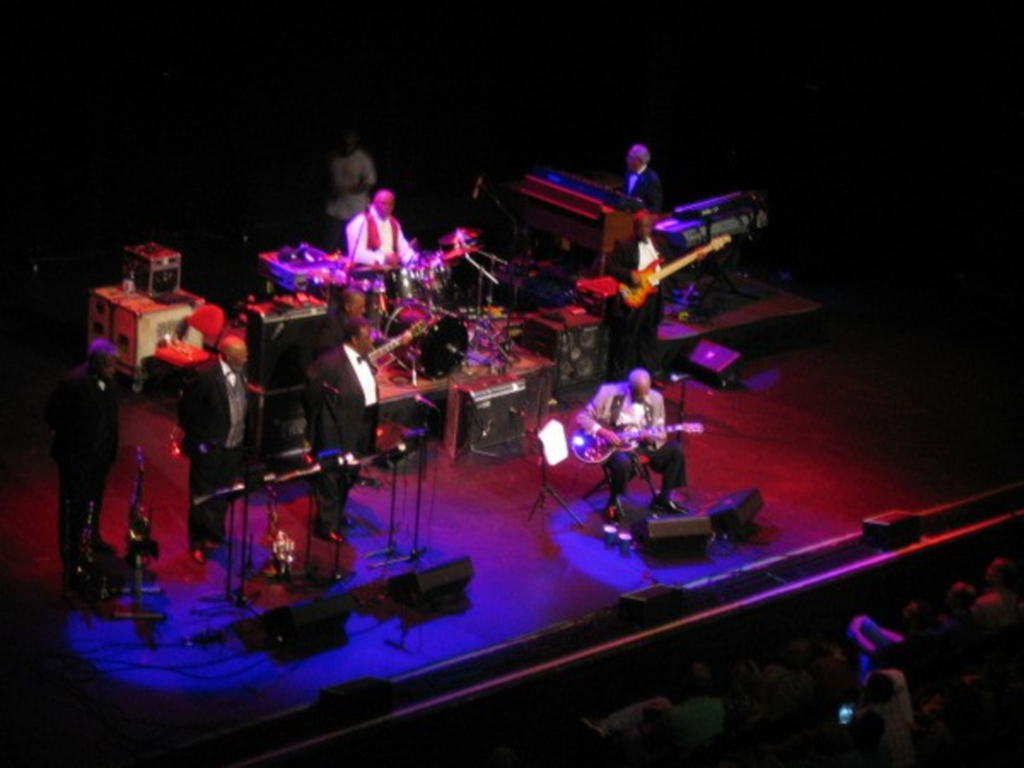 From a distance, it looked like the folks tasked with keeping King safe were ready for him to stop way before he was willing to leave the stage. A sizeable portion of the crowd headed out long before the headliner did, giving up on the show’s drift, and they unfortunately missed the best, and most impromptu, song of the evening. As his bandleader prepared to help him to his feet to go, King, inspired by someone in the front row, suddenly said “We need a love song!” The band quickly burst into “Darling, You Know I Love You,” and for that one song, King was all the way there.

And there he stayed. At least a third of the crowd remained long after the house lights came up, and so did B.B. King – approximately 95 minutes after he first took the stage – determined to close the evening with his own last “Thank you, and good night.”

Leftovers: Local openers Madisen Ward and the Mama Bear (Madisen’s mother Ruth Ward) made the Midland seem too small – but, then again, the duo’s mix of joyful songs and mournful stories would probably make the National Mall in D.C. seem small. Madisen’s voice is part Richie Havens and part Paul Robeson (with splashes of Michael Franti and Amos Lee, too), and it mixes with his mother’s gorgeous alto perfectly. It’s obvious where Madisen Ward got his voice, and it won’t be long before the duo is headlining theaters themselves.

Setlist (approximate, leave corrections in the comments):
I Need You So
I Need You So (Reprise)
Rock Me Baby
You Are My Sunshine
The Thrill Is Gone
Every Day I Get The Blues
Darling You Know I Love You