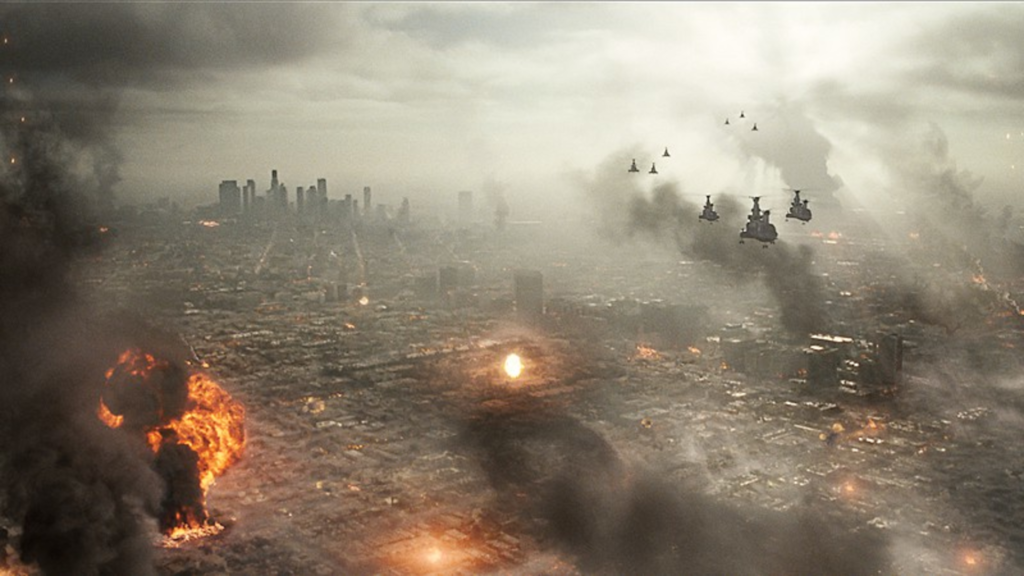 The shaky cam is coming, the shaky cam is coming! Jonathan Liebesman directs his alien-invasion saga Battle: Los Angeles as if he were having a violent seizure, wedding whiplash faux-war-documentary aesthetics to a Michael Bay cocktail of ooh-rah military romanticism, quick-stroke melodrama and seesawing CG mayhem.

Called into duty after news reports of extraterrestrial warfare devour the airwaves, a John Wayne–type staff sergeant (Aaron Eckhart) — on the eve of retirement and in search of redemption — leads a Marine squad into laser-demolished downtown Los Angeles to evacuate civilians. As they proceed block by invader-infested block, their mission suggests parallels with Iraq and Afghanistan that are overwhelmed by bludgeoning cacophony and visual incoherence.

Matching the indistinctness of the human protagonists, whose pre-conflict intros fail to establish empathy for their future up-a-creek circumstances, the film’s mushroom-headed biomechanical invaders prove a featureless bunch out to steal the planet’s water supply. Not a single arresting image is found amid the sci-fi rubble, though unintentional laughs eventually arrive courtesy of a cornball motivational speech by Eckhart’s hero that he then immediately dismisses with, “None of that matters right now.”

Ultimately, it’s not clear what’s more nauseating: the Tilt-a-Wheel cinematography, the shameless second-act bid for weepy child bathos, or the suggestion of an inevitable sequel.