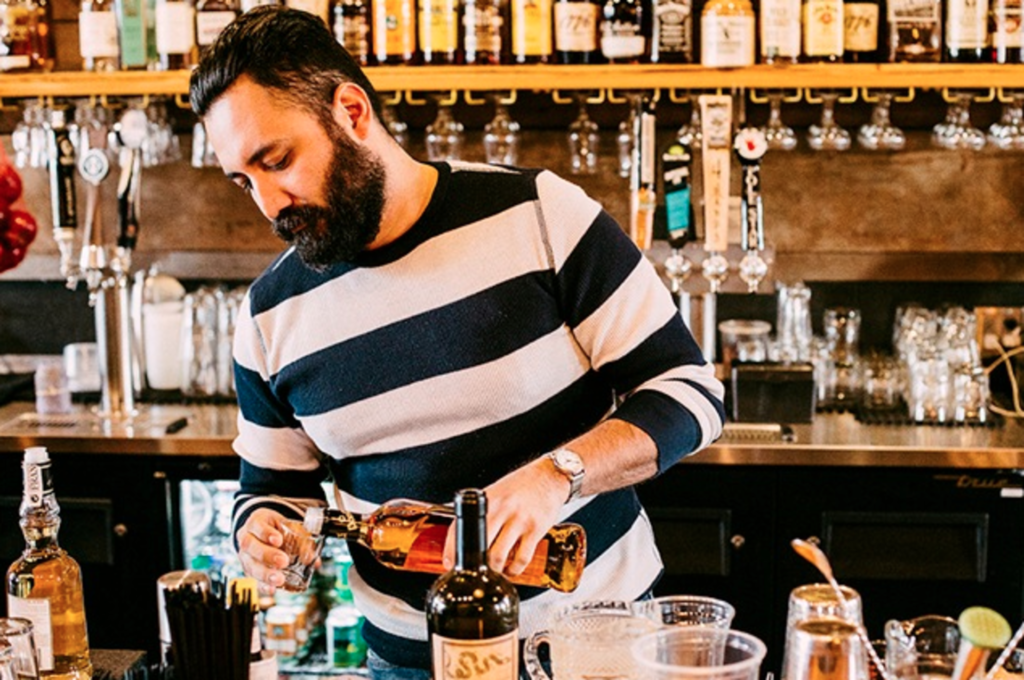 Vic Rodriguez has thought all week about the cocktail he’s going to prepare for me. When I sit down at his bar at Thou Mayest, early on a Friday afternoon, he begins to tell me about the elaborate concoction he has in mind. It makes me feel a little bad.

“That sounds fantastic,” I tell him, “but the idea is to put you on the spot a little bit.”

I also remind Rodriguez that at least one of his creations today must involve coffee. Thou Mayest has the benefit, after all, of having both a terrific coffee program and a fine liquor selection.

He takes my heartless derailing of his plans in stride and says simply, “Do you have a base liquor in mind?”

“As long as there’s a coffee element, you can do whatever you want. Have fun.”

Rodriguez strokes his beard for a moment. He turns, faces the fine shelves, with their immaculately arranged bottles, and weaves his fingers together behind his head. The Saturday Night Fever soundtrack plays loudly.

He pulls down the Grand Marnier, tastes a bit of it, then takes out a carton of heavy whipping cream. He measures both ingredients into a Mason jar, which he seals and shoves into an ice bin. He keeps moving, his brow furrowed.

It’s not always easy to see what he’s doing, but I smile when he reaches for the bottle of Roca Patrón Reposado. In a Collins glass, Rodriguez combines the tequila and what I later discover is simple syrup, plus Chia Pod chai tea and Thou Mayest’s Brazilian–Sumatran toddy (cold-brewed coffee). He shakes the Mason jar like he’s mad at it, pauses for a quick taste, then adds more cream before shaking it again. He adds ice to the mug, then pops the lid off the jar and floats the impossibly fresh whip over a spoon and atop the drink. A touch of freshly ground nutmeg, and the drink — “The Fever” — is mine. 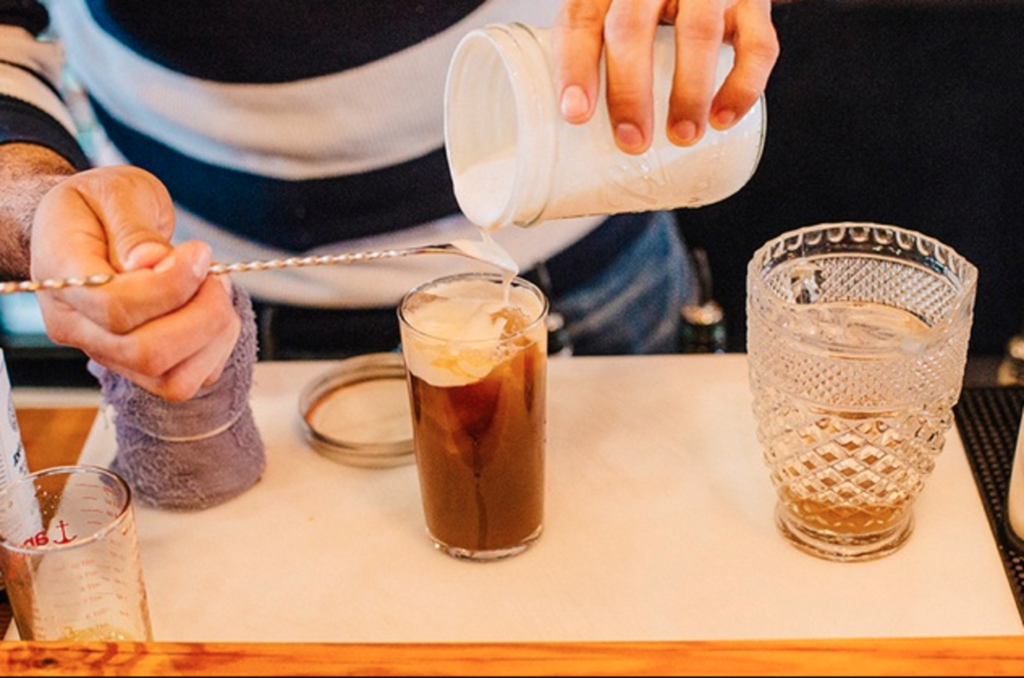 It looks like an exceptionally classy Irish coffee, but there’s more to it than that. If the magic of watching Rodriguez craft Grand Marnier whipped cream from scratch didn’t sweep me off my feet, this little treasure does. The cream: super-rich, more than a little boozy and with a refreshing citrus twinge. The drink: spicy and luxurious, with plenty of warmth — a surprise, considering this is an iced cocktail.

“Hot coffee drinks are kind of a no-brainer,” Rodriguez says. “Cold coffee is a bit of a challenge because if people are used to it, they’re used to having it in a Frappuccino or something overly sweet and crude. And I like a challenge. Otherwise, I wouldn’t do what I do.”

He goes on: “Whenever I make anything, I think in terms of terroir and affinities, and for me, coffee and Mexican spirits go hand in hand. The Patrón Roca Reposado is an amazing product. It’s slightly aged, so it’s going to have a bit more sweetness to it, but it’s still going to have that earthy, punchy, raw-agave spirit taste, and I knew that would cut through the sweetness of the chai and the simple syrup. All those flavors go really well together.” 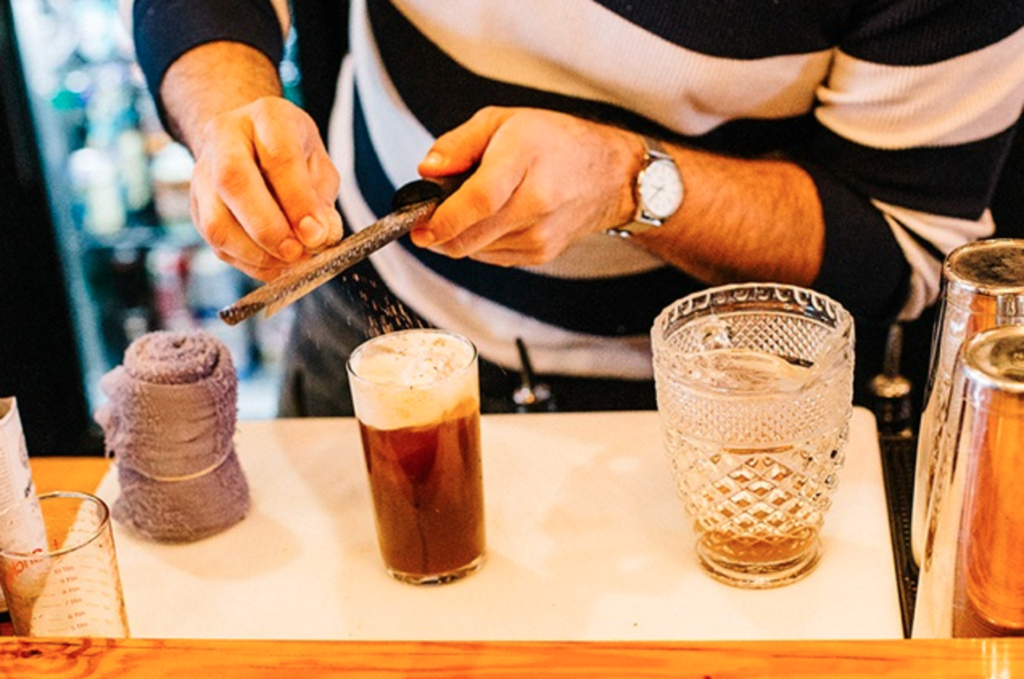 Even the whipped cream wasn’t mere peacocking. The addition of Grand Marnier extended the flavor profile of the tequila, he says. Doing it fresh was necessary — a lesson Rodriguez says he learned from his time working the bar at chef Ryan Brazeal’s Novel restaurant.

Eager to see what else Rodriguez can do, I’ve already decided what I want in the next drink. I’ve noticed a bottle of Francoli grappa, Italian grape brandy.

As Rodriguez begins to piece a recipe together — tasting spirits and ingredients as he goes, like a cook contemplating spices — he pours me a taste of the grappa. It looks like white wine, but it doesn’t smell nearly so friendly — closer to a dessert wine with a grudge.

“Just so you know, this is really hard,” Rodriguez tells me a few minutes later, after he has discarded a half-completed drink.

He pulls down bottles of Cynar and Cardamaro, mixes those liqueurs into a small crystal pitcher with the grappa and a dash of chocolate bitters, and stirs with ice. He strains this mixture into a rocks glass and garnishes the drink with an expressed orange rind. 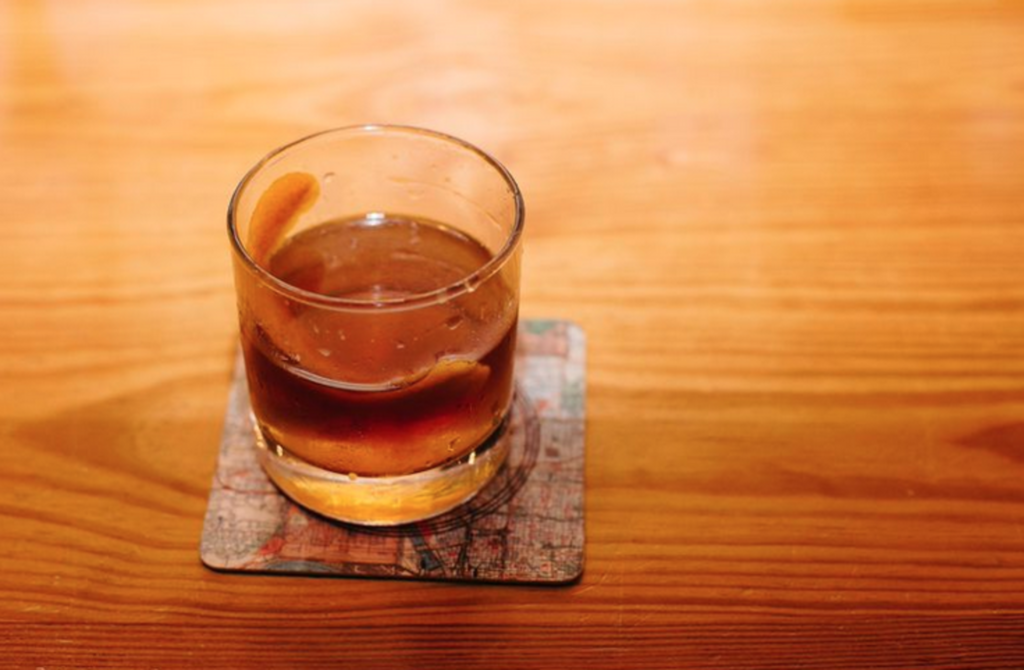 He calls this one the “G-Ma Pat,” and it resembles a Negroni, with a flavor profile similar to that summer classic. It’s a huge success, considering the degree of grappa difficulty. Rodriguez has taken this bar loner and played it against the savory, herbaceous elements of Cynar, a lightly bitter Italian artichoke liqueur, and the sweetness of Cardamaro, an Italian cardoon liqueur.

He knows these ingredients share similar properties — the grappa and the Cardamaro are both oak-aged — and he figured that the taste would be complex. It is, delightfully so. The G-Ma Pat doesn’t quite punch you in the face, but it’s definitely a sipper, and the grappa pops and cracks in your mouth, its bullying temperament reduced to a pleasantly acidic bite. There are bits of saline and lemon oil, too, Rodriguez says, though those ingredients are barely detectable. He has called on them as stabilizers.

For all his deliberation, Rodriguez’s grappa cocktail feels elegant and effortless. I want to tell him this, but someone else at the bar has ordered a drink, and he’s facing his shelves again. I let him think.