Bartender’s Notebook: The Rieger’s Jenn Tosatto makes a drink fit for a queen 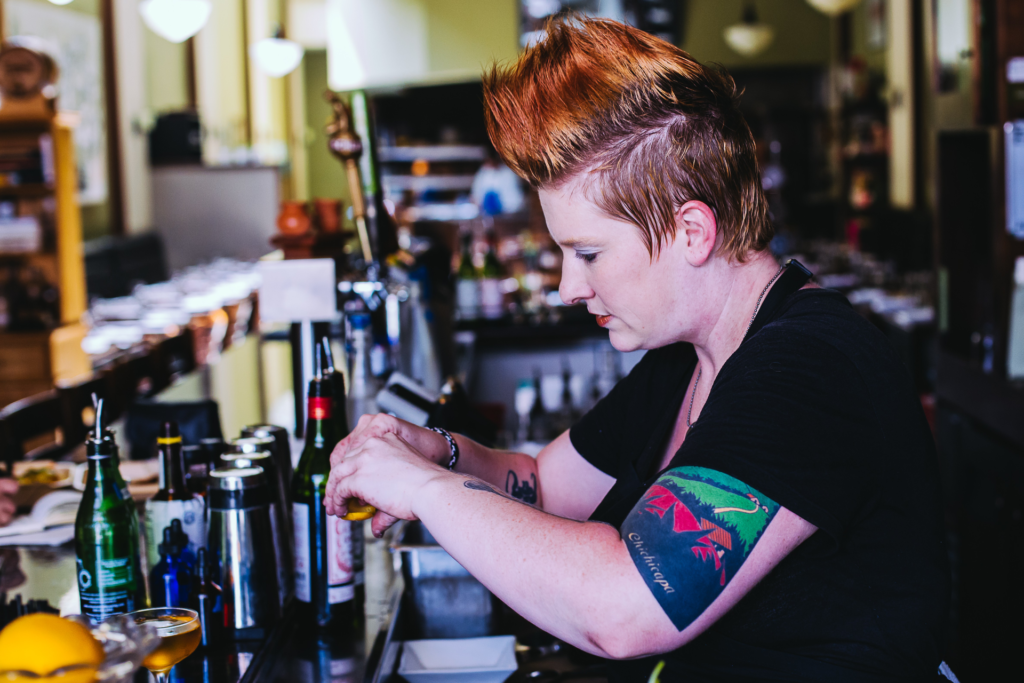 Early on a weekday afternoon, Jenn Tosatto is a blur of impressive mohawk and bar-themed tattoos as she preps for happy hour behind the handsome bar at the Rieger Hotel Grill & Exchange. She commands this space Monday through Friday, a queen pre
siding over her loyal court during those most holy (and most necessary) of hours.

There’s no crown, but no one disputes her place among Kansas City’s most respected industry talents. Tosatto has competed in the Paris of the Plains Bartending Competition since 2008 (when it was still the Greater Kansas City Bartending Competition). Last year, she took second place, behind the American’s Paige Unger. Though she won’t be competing this year, Tosatto is coordinating the Midwest Melee — her “brainchild,” she affectionately calls it — in which bartenders from seven Midwestern cities face off. This is all, of course, in addition to her regular gig at the Rieger.

“I’ve been at the Rieger since we opened, so it’ll be four years in December,” Tosatto tells me as she arranges her station. “I love it here. I’ve worked in just about every type of bar, and what I love about the Rieger is that I get to do a little bit of everything. I’m making really nice cocktails and, at the same time, pulling a $2 Schlitz off the draft.”

I don’t mind a Schlitz now and then, but today I have come to Tosatto to experience firsthand her cocktail prowess. I have in mind something containing genever, a ginlike spirit that is more common in the Netherlands than it is in the States. But my curiosity will not be slaked today — alas, Tosatto does not have it. We talk a little, and she instead pulls a bottle of Mathilde Pêche liqueur from a half-forgotten perch on a shelf, behind a few other labels.

“It’s a French, very peachy liqueur,” Tosatto tells me. “The recipe for it is over a hundred years old, and it’s really delicious. You get some really intense peach flavor without it being overly sweet, like some fruit liqueurs can be.”

It all sounds a little dainty to me, and I eye the bottle skeptically. But I ask Tosatto to go ahead and make me something that she herself would enjoy. I detect a new shine in her eyes, and she gives me a wide grin. It’s this moment when she redirects her considerable energy from the organizational to the creative. At some split-second juncture between those two poles, she must have decided on a recipe, one she knows so well that there’s no pause before she gets to work. Before I can finish writing down the steps I watch her take, a beverage the color of sunshine appears in front of me in a coupe glass. 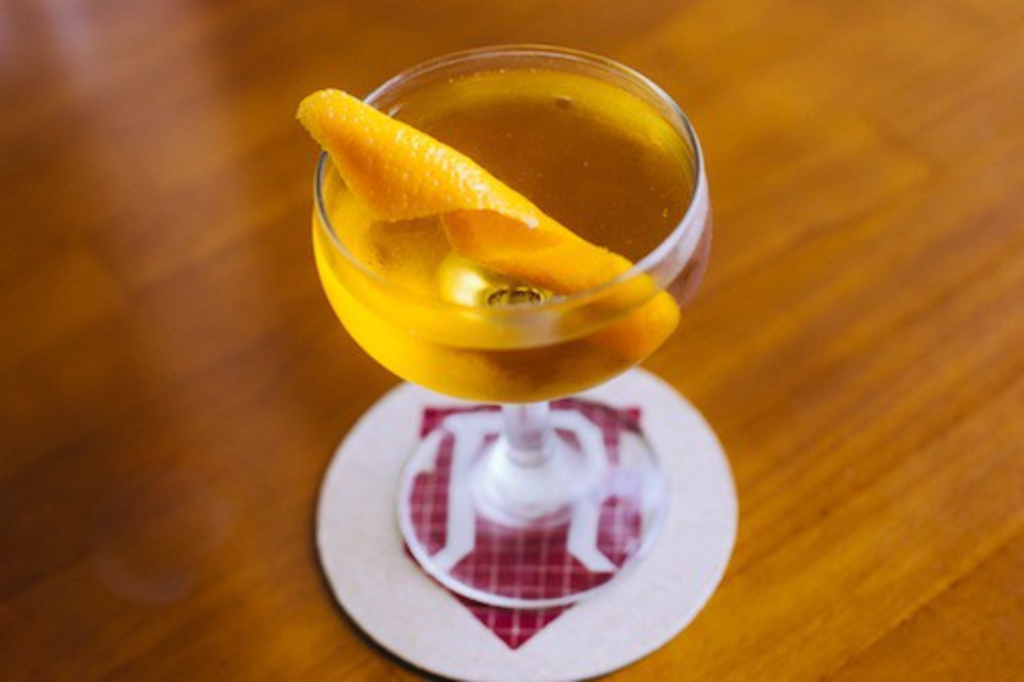 “So, here I used a Plantation 5-year rum,” Tosatto tells me, still smiling big as she explains the components of her creation while my photographer holds it hostage. “This rum goes really well with big, badass, fruity flavors. I also used a sherry, Alvear Medium Dry. There’s a nice roundness to it, and definitely some nuttiness on the back end. I coated the glass with Elemakule Tiki bitters, to complement the rum.”

She calls it “Roland of Gilead” — Tosatto is a devotee of Stephen King’s The Dark Tower series — and it deserves some kind of prize.

“I kind of strive to make really well—balanced cocktails without getting too fancy-schmancy,” she says. “That’s kind of what I was going for here — to build a cocktail that would really highlight the flavor of the peach.”

Peach notes pop right up, all right. The Mathilde Pêche mixes with the rum to create a honeyed, fruit-forward profile. But that gives way to a lip-smacking butterscotch flavor (enhanced by the sherry), which yields to a rich, toasted-walnut note before landing on a hint of cinnamon and spice reinforced by the bitters. The same run of complex flavors — starting with the peach — repeats itself with each new sip.

I asked Tosatto to make something she would enjoy, and she has served me a drink fit for a queen. Seems right.

“I like making drinks where you can really sit back and have a couple without feeling like the liquor is overbearing,” she says.

The Roland of Gilead is nothing but booze, yet it’s so understated and delightful that it doesn’t last long. I sit back and have another.

ROLAND OF GILEAD
$9 at the Rieger, or try it on your own:

Tosatto says: “Coat a cocktail glass with the bitters. Stir the liquor all together, then strain into your glass and enjoy.”