Bartender’s Notebook: Ryan Rama talks to us about curaçao at CoCo Bolos

Michael Smith’s new CoCo Bolos is nestled within the theme-park-like maze of residential and retail development called PrairieFire, at 135th Street and Nall, and it took me three laps to get to it. By the time I sat down at the Mexican restaurant’s expansive bar, I felt like I had earned a drink. Ryan Rama was ready to meet my needs.

Those needs involved the unusually specific ingredient that had been on my mind recently: Pierre Ferrand Dry Orange Curaçao. I’d noticed it popping up in nearly every experimental cocktail I’d seen around, but I had only a vague idea of what role the liqueur played. Or, honestly, how to pronounce it (say cure-uh-SOW). I unburdened myself to Rama, and he patiently unraveled the mystery for me.

“We use dry curaçao to replace triple sec fairly often here,” Rama told me. “It’s in one of our margaritas and our house sangria. Dry curaçao tends to express the fruit in a drink a lot better, without using loads of sugar to make it shine. And it definitely has a lot of layers of flavor rather than being one-dimensional, like a triple sec tends to be.”

Rama added that Pierre Ferrand is fairly new to the market — it debuted in April 2012 — and it owes much of its popularity to its bitter-orange flavor. It maintains a dryness largely absent from triple sec, which typically takes on a sweet-orange profile and ends there. And the Pierre Ferrand dry is made with a blend of orange peels, spices, brandy and cognac — components that make it a more versatile cocktail ingredient. For Rama, in fact, it’s already a staple.

I asked Rama to make me a drink that would show me just what curaçao can do.

“Just something off the cuff?” he asked, looking at the tall stack of shelves containing CoCo Bolos’ impressive booze collection. I signaled yes, and Rama took down a bottle of Plymouth Gin and a bottle of Absinthe Ordinaire. He mixed the gin and the curaçao in a shaker, using a straw to add drops of absinthe, along with dashes of house-made lavender bitters and some lemon juice. He shook the mixture, then strained it over ice into a tall wineglass before topping my drink with cava. He spent a moment carefully arranging the garnish, a long orange peel and a hefty helping of mint leaves. 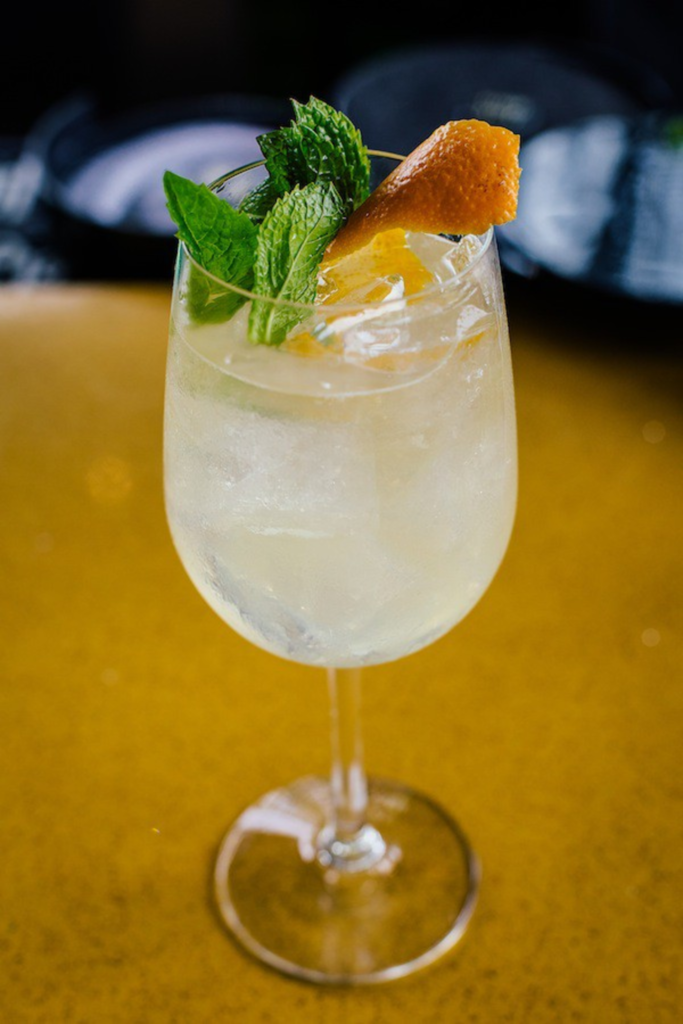 “This is based on something I’ve kind of been working on,” Rama said. “I’m really obsessed with the Spanish-style gin and tonic, where what they do with a two-ingredient drink is magically expanded because they throw all sorts of botanicals in there to really enhance the experience. I mean, it’s not just gin and tonic with a little lime wedge hanging off of it. They throw in mint. They throw in citrus peels, star-anise pods, cardamom pods, you name it. It’s almost like a culinary experience, but with a gin and tonic. So using that as an inspiration, I’ve been working on something with gin, fresh-squeezed lemon juice, lavender bitters, sparkling wine, and a little bit of the curaçao to enhance the acidic qualities of the gin.”

The result, which he has named “Off the Cuff,” was a dainty-looking thing, like the sort of fancy lemonade you would expect at a summer wedding.

But looks can be deceiving. The orange from the curaçao was the first thing I noticed, both on the nose and in the flavor, but that gave way quickly to a heavy juniper presence from the Plymouth. That was further enhanced by the lavender that Rama had chosen. The cava brightened things up considerably, adding just the right amount of effervescence to encourage continued sipping. And a very light hint of licorice (from the absinthe) left a lasting impression.

With every taste of Rama’s Off the Cuff, I marveled at the new flavors I tasted: citrus, hints of spice, traces of fruits I probably couldn’t name in a game of Pictionary. The subtle, morphing profile of this drink could be attributed to the curaçao, but let’s just give Rama credit for a certain sorcery.

“The thing with cocktail recipes is that they kind of remind me of a Mr. Potato Head,” Rama said. “You can kind of pull the eyes out and put something else in there and have fun with it. To me, recipes are more like guidelines rather than something dogmatic that you have to adhere to. I like to use recipes as the framework and then go from there.”

Rama’s instructions: “Having absinthe is kind of critical, but if not, then some other kind of anise liqueur, like ouzo. And then, basically, it’s just throwing it all together, shaking it up, straining over ice, and topping it with some sparkling wine.”