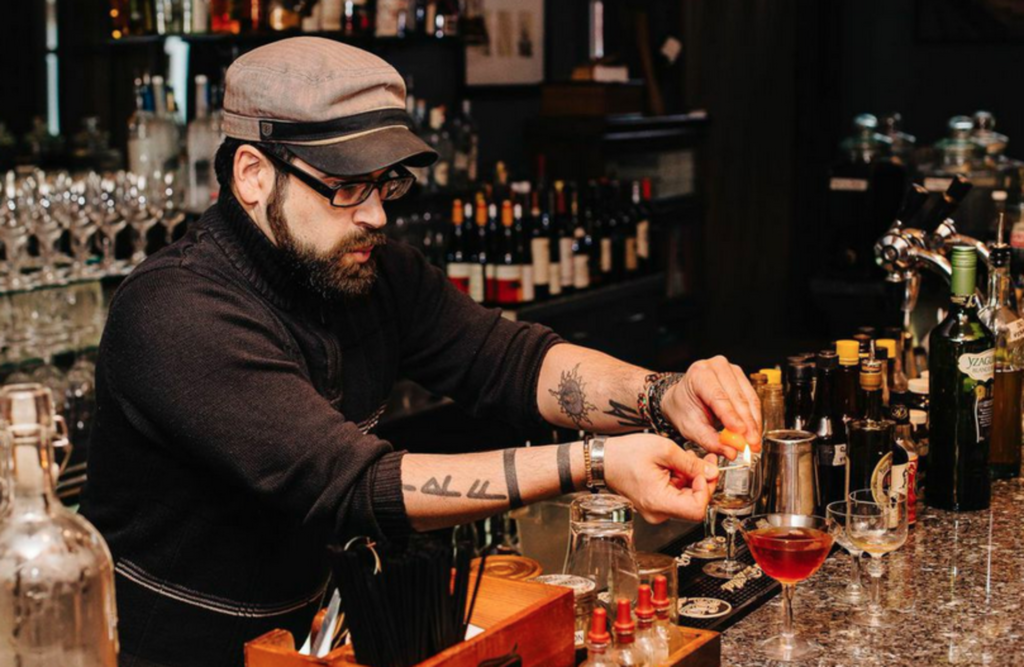 The bar at Smithville’s Justus Drugstore is small, with just a half-dozen seats in front of it and, behind it, a claustrophobic array of bottles covering the shelves and countertop. The place looks, perhaps, one wholesale delivery away from needing a PODS unit. Not every vessel is commercial — dozens of glass jars and vials contain liquids in various hues, labeled with marker on simple strips of masking tape: house infusions, bitters, liqueurs. For a pro, this station isn’t just a bar. It’s a laboratory.

And now there’s a scientist on duty. Arturo Vera-Felicie, veteran of the bar programs at Tannin and Thou Mayest, has joined the Justus team. When I show up on a weekday afternoon, he emerges from the back wearing a solemn expression that looks, framed by his dark beard and glasses, grimmer still. This is a man, I think, who takes drinking very seriously.

I tell Vera-Felicie that I’m here to get serious about vermouth, and he unsmilingly arranges four bottles in front of me. I recognize the Yzaguirre Blanc and the Carpano Antica Formula. He has also set out a house-made dry and a house-made sweet.

“Vermouth, for all purposes, is just a fortified wine that’s been infused with herbs, botanicals, roots, barks, peels,” Vera-Felicie tells me. “There are two classics: If you look at 19th-century recipes, you have what’s called Italian and French vermouths. Generally, Italian meant sweet vermouth, and French vermouth meant blanc, which is still sweet but not as heavy. Dry vermouth became popular in the mid-20th century, and now it’s kind of the myth of the martini.” 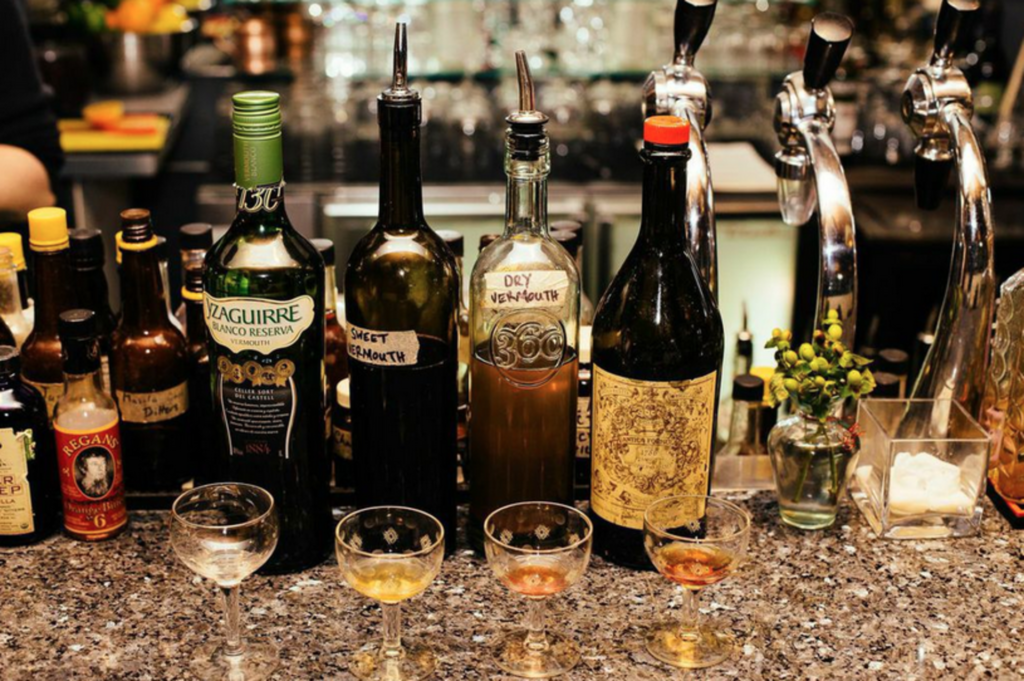 While Vera-Felicie tosses the encyclopedia at me — complete with the etymology of the word (it comes from the German wermut, meaning “wormwood”) — I start tasting.

The Yzaguirre is delightful, a crisp and sweet white wine that I can imagine sipping over ice with soda (as Vera-Felicie recommends) before a meal. From there, the flavors get more intense as I go down the line. The house-made dry offers some light spice notes, Gala apple and a hint of ginger. The house-made sweet takes on caramel and cinnamon. The Carpano Antica is syrupy, raisin-forward, heavily spiced.

Then I spot another uncommon bottle on one of his shelves: Akvavit.

“The best way to describe Akvavit is as a Scandinavian gin,” Vera-Felicie says, pouring me a taste. “Gin is a neutral spirit that you add flavor to with botanicals. In gin, the main botanical is juniper. In Scandinavia, they would make Akvavit with cardamom, cumin, fennel and caraway. So think a spicier, more wintry gin.”

Stateside, it’s the rare cocktail that prominently features Akvavit. Blame its reputation on its bold (some might say lighter-fluid-like) profile. Thanks to my years in Norwegian-influenced Minnesota, though, this spirit sounds right up my glass. What can Vera-Felicie do with it, I wonder?

He doesn’t think it over long before he starts to measure both the Justus sweet vermouth and the Carpano Antica over ice in a crystal glass with the Akvavit and some house-made apricot bitters. He stirs this mixture and strains it into a chilled antique coupe glass. He flames an orange rind over it and then slides it toward me. 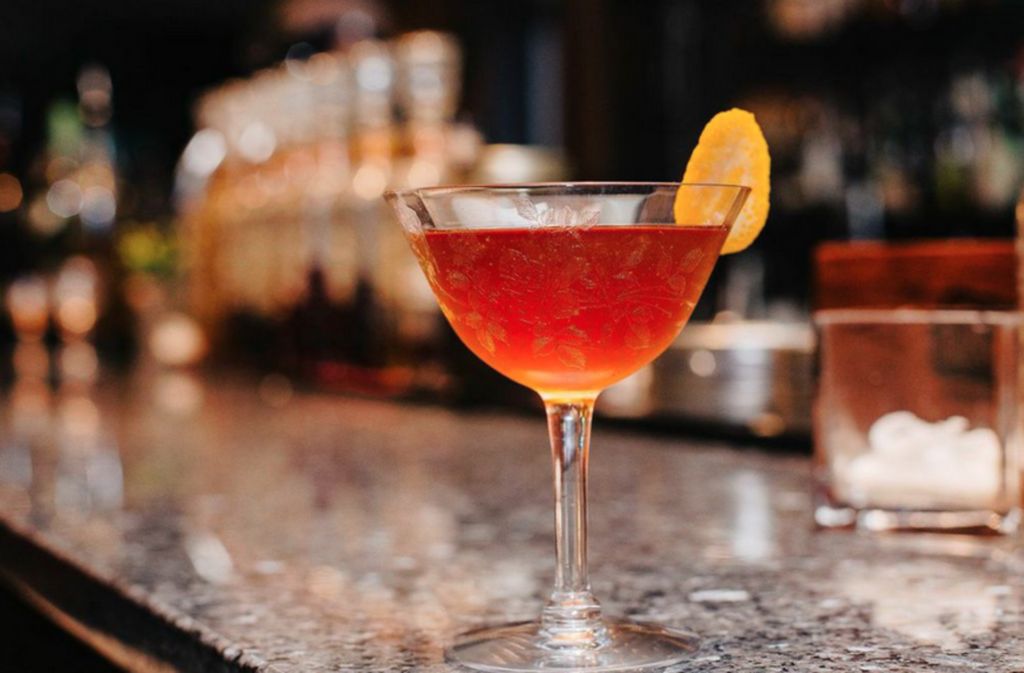 This drink — the Long Night, Vera-Felicie calls it — riffs on the Martinez, a classic gin cocktail with sweet vermouth and maraschino liqueur. It is a deep sunset-orange color, and the low light inside Justus adds a separate ruby glint to the liquid. It looks potent.

It turns out to be airy. Citrus and baking-spice notes introduce themselves, but don’t linger on the palate.

“This would be a great before-dinner drink,” Vera-Felicie tells me. “It’s not super-heavy, doesn’t have a lot of alcohol, so you’re not super-buzzed before you get your entrée.”

I agree, but now I’m ready for my own main course: a cocktail made with the ingredients of Vera-Felicie’s choosing.

Finally, he smiles a little. “So, are you in the mood for something hot or cold?” Cold, I say, and then I add that I want something that’s truly a surprise.

He starts working, and I hear him say, “I’m leaning toward the brandy,” perhaps to his fellow bartender. Eventually, there’s a mixture, stirred and chilled, which he strains into a seltzer charger. This he seals, then shakes vigorously, and then shoots into a Collins glass. What comes out looks cloudy, like pale chocolate milk with snowpack foam. It’s a surprise, all right. 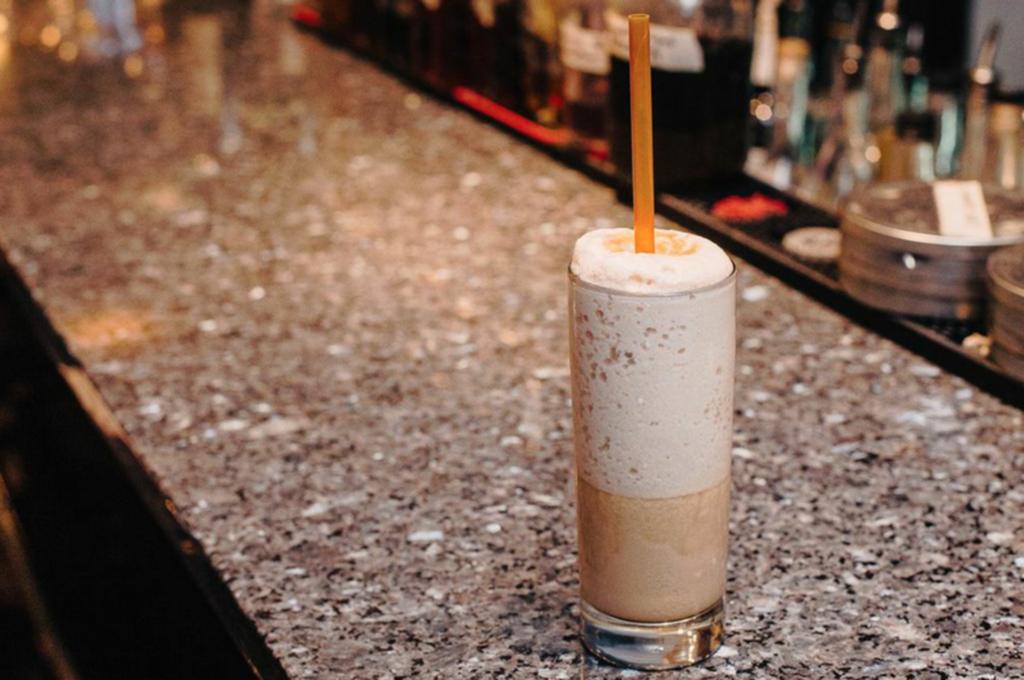 I give this adult milkshake — he names it Mad Haberdasher — the side eye before I taste it, but I’m rewarded with a velvety sip.

Vera-Felicie explains: “For this, I took Carpano Antica again, heavy cream, this house-smoked apricot cordial, Earl Grey tea and our pear-and-dark-chocolate-infused brandy. I chilled it and then I charged it with nitrous oxide.”

The fruit and chocolate components mingle pleasantly, neither overpowering the other. Had Vera-Felicie ever made this before?

“I tried it once, and it didn’t work,” he admits with a laugh. “It’s a technique I read about in The Cocktail Lab, a book by Tony Conigliaro. It’s a really intense read, kind of about taking bartending and mixing it with science and art at the same time. For all intents and purposes, it’s kind of an Alexander-style drink, but with science.”

Science, yes, but also a little bit of magic. “That’s going to be my catchphrase for bartending,” Vera-Felicie tells me. “Science and sorcery.”

Vera-Felicie: Stir and serve up, with a flamed orange twist.