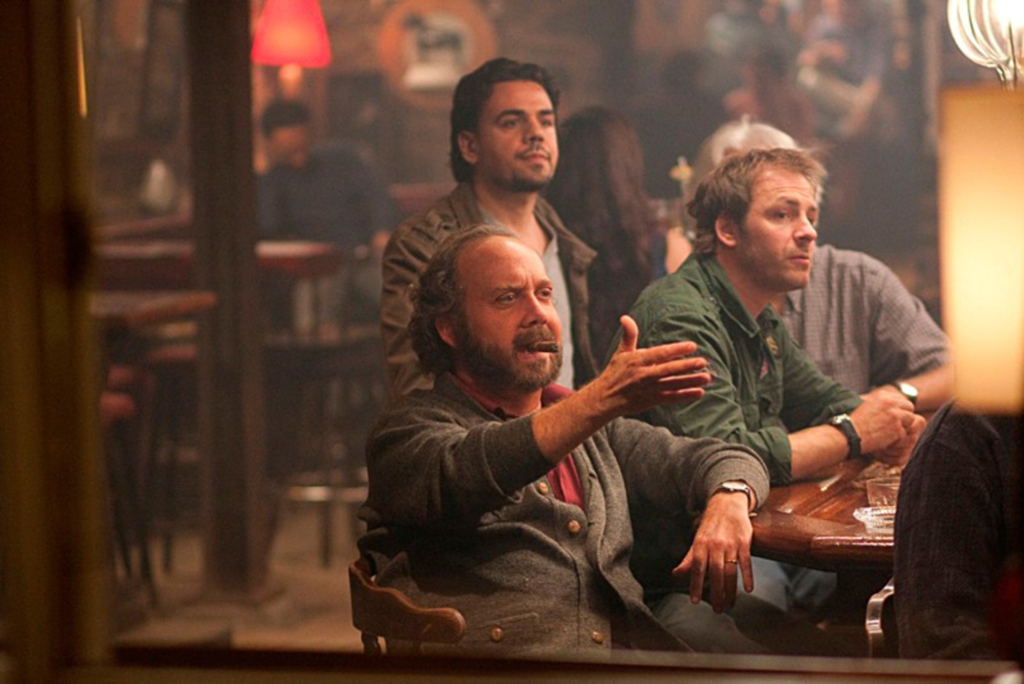 The late Canadian writer Mordecai Richler (best known here for The Apprenticeship of Duddy Kravitz) was a bellicose practitioner of fiction in the manner of Philip Roth and Saul Bellow, with a mad helping of Joseph Heller. The joyfully anachronistic Richler took fierce delight in skewering the politics and culture of his beloved, hopelessly divided home province of Quebec. But his subject was human venality in all its forms, invariably seen through the eyes of a haplessly unreliable Jewish narrator as acute in his perceptions of the vanities and follies of others as he is blind to his own.

So it comes as a big letdown that director Richard J. Lewis (not to be confused with comedian Richard Lewis), working from a reasonably faithful screenplay by Michael Konyves, has made mushy pudding out of Richler’s 1997 last novel, Barney’s Version. Paul Giamatti mugs away gamely as the titular un-hero Barney Panofsky, a Montreal producer of schlock television, whom we meet adjusting poorly to geezer status and reflecting, with insufficient Richleresque bile, on his magnificently botched life. Barney has had a few regrets, leading with the loss of his adored third wife, Miriam (Rosamund Pike), to a vegan New York producer (Bruce Greenwood).

The other lost love of Barney’s life is Boogie Moscovitch (Scott Speedman), an erudite alcoholic who, long ago in a young-blade sojourn in Paris, taught Barney about literature and all things carnal. Their tortured relationship, and Boogie’s death by ambiguous means, is the occasion for great wads of artless flashbacks to 1950s France, where Giamatti makes the usual rite-of-passage life mistakes before stumbling on his God-given gift for making money.

Back and forth the movie plods between Barney’s wastrel youth and his hapless present. In a ballooning sack of intervening years, he gets himself hitched for the second time to a rich Jewish vixen, whom we are meant to despise. Minnie Driver, the only actor not on autopilot (unless you count Dustin Hoffman, as Barney’s socially graceless but lovable dad), manages to invest this bitch with a strident integrity that’s endearing, even as the disproportionate noise she makes throws the movie out of whack.

Somnolently paced and emotionally constricted, Barney’s Version never finds a rhythm or a theme to call its own. Worse yet, the Canadian-born Lewis mostly strips the novel of Richler’s rambunctiously Dickensian sense of place and local character, missing an opportunity to dispose of tired clichés about milquetoast Canada. Pay close attention in the movie and you’ll catch cameos by three homegrown filmmakers (Denys Arcand, Atom Egoyan and David Cronenberg), whom I bet would have made Barney’s Version their own without ditching Richler’s vitally iconoclastic spirit.

Richler was praised by some as a clear-eyed observer of postmodernity and dismissed by others as an equal-opportunity bad-mouther, but he was a gleeful provocateur who wrote in funny, excoriating, entertainingly hectic prose.

When Richler’s Barney tells Miriam that he’ll never give up on her, years after their marriage is over, you believe him, even though his chronic unreliability as a narrator is accelerated by alarming portents of senility. You can’t help thinking that this sweetly uxorious, if clueless, fellow gave up not just on Miriam but on life itself long ago. Barney’s Version may be dedicated to Richler, who died in 2001, but I can see him now, rolling his eyes.