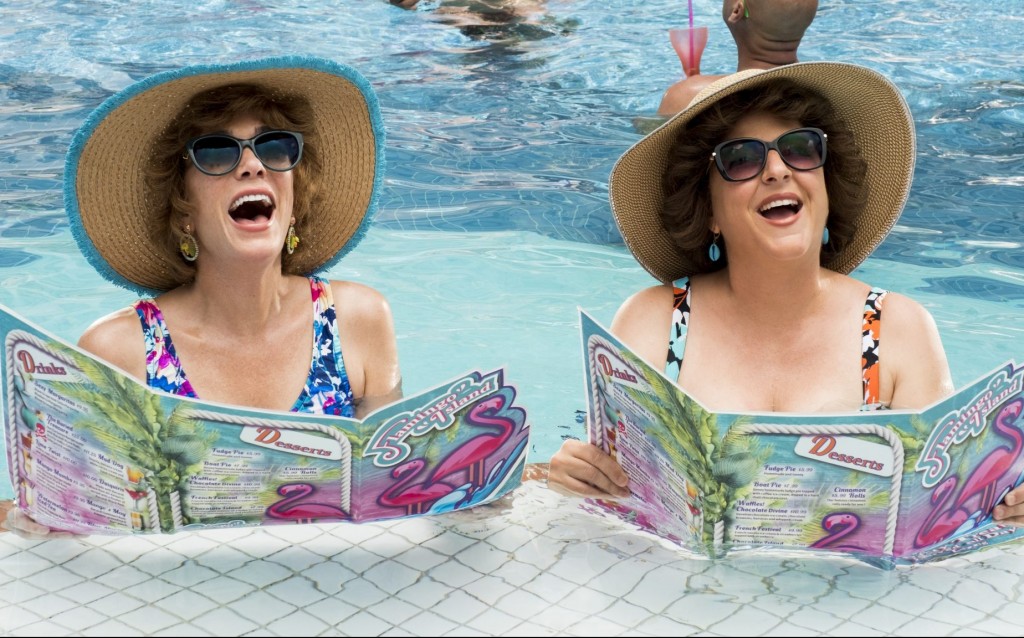 Barb & Star Go to Vista Del Mar is a new comedy scripted by and starring Kristen Wiig and Annie Mumolo. Their writing partnership is best known for Bridesmaids (2011) and on-screen they’ve both been acting staples for decades. This odd experiment between them results in perhaps the highest “Your Miles May Vary” rating I can give a film, and that isn’t a bad thing.

Barb and Star are two midwestern women in their 40s. When the furniture store that they (kinda) work at goes under, and they are simultaneously shunned by an extended friend network, the two besties decide to take a trip to Vista Del Mar, Florida. From there, the buddy vacation comedy morphs and shifts across genres, storylines, main characters, and tone—to the degree that it could easily be six different movies. And it’s wonderful.

To give you some idea of scope here, there is an 80s travel comedy stuck inside a relationship drama stuck inside an action spy movie, all wrapped up in a big musical bow. That’s even a simplified version. The one and only throughline is that the jokes never stop coming, and when they hit they really, really hit. Elsewhere, it’s been (for good reason) compared to The Lonely Island’s Popstar, but it truly hues closer to the experience of a recent rewatch of The Spice Girls’ feature Spice World. If either of those are big winners in your wheelhouse, you must run—don’t walk, run—to your couch right now and drink in this glorious elixir. Your mileage will not, indeed, vary. Your mileage will be sky miles.

For everyone else, I’ll offer up a blanket explainer. You know when you see a passion project or indie film from a comedian you love, and you’re a bit caught off guard because it’s not exactly the kind of humor you’d associate with them? But then you realize “Oh, this is what they find funny. Okay.” This is absolutely that for Wiig and Mumolo. Steered into expecting a wildly different movie by the (deliberately) misleading trailers, this film had a jagged start for me. And sometimes a jagged middle. On first watch I put it somewhere in a middle range, much to the chagrin of our resident film editor, Abby Olcese, who elsewhere wrote a love letter to the film.

I worry that my tepid response radicalized her. As exemplified here:

Abby, I promise you needn’t die for them. I’m sorry for pushing you to the edge.

On rewatch, I did an expected shift towards the positive, that I verbalized to my wife during the first viewing. I knew I was going to pivot towards loving it eventually because of the secret mission I assume it had in mind. Barb & Star Go to Vista Del Mar seems designed in a lab to be a future fixture of late-night theater screenings; with a cult-like following doing the read/sing-alongs. It exists at such a high level of camp, it might as well have exited our atmosphere. Every scene is geared towards a different, seemingly incompatible group of ideas, that result in an expedient powerplay from start to finish.

And yes, actor Fifty Shades of Grey’s Jamie Dornan sings an elaborate musical number about seagulls in a feature film where Richard Cheese plays himself and a dastardly evil scientist is avenging teenage trauma via murder hornets.

There’s a lot going on.

The camp and the jokes aside, the thing that keeps me consistently warming on the film is that I just have to respect it. There are so many different elements at play that I imagine most people will find some percentage of it landing bigly for them. Just as a numbers game, this really plays the feel. But mostly it is exactly what it endeavors to be. Mumolo and Wiig had a vision and this is undeniably that vision made manifest. It has that kind of confidence that, were it a person at a party, you would find yourself swept off your feet by it.

Barb & Star Go to Vista Del Mar is so singular in intent—and in I suppose mere existence—that you’d be a bad person to cheer against it.