The Ultimate Stay-at-Home Dad is an essential tool for any father to have in his arsenal. 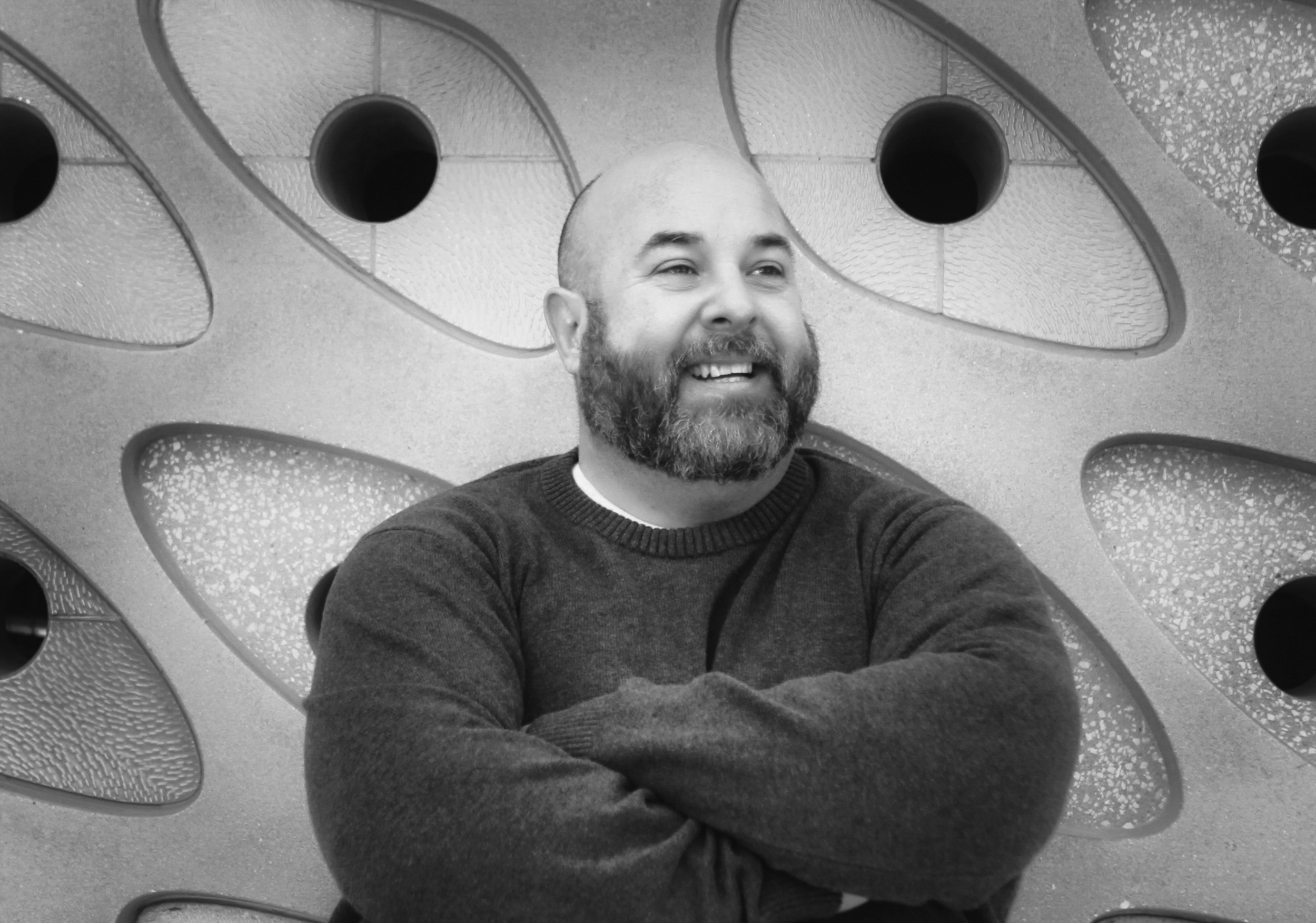 “Congratulations on your promotion to an at-home dad! Your new job pays nothing, starts at midnight, and there are no sick days. You’ll love it,” writes Shannon Carpenter, local author and parent extraordinaire, in his forthcoming book with Penguin Random House, The Ultimate Stay-at-Home Dad: Your Essential Manual for Being an Awesome Full-Time Father.

The Ultimate Stay-at-Home Dad is a rollicking guide, rich with tips and hilarious anecdotes that soon-to-be dads absolutely need, and that veteran dads can chuckle along with. While rooted in humor and levity, the book encompasses the diversity of emotions a father feels while living out the day-to-day of parenthood, from the soul-crushing and life-giving moments to inexplicably sticky ones that have to be scrubbed off of the wall. (Don’t worry, though: Carpenter’s got you covered in chapter two with a homemade cleaning solution recipe and a blunt-edge scraper rec for those particularly exciting times.)

Carpenter wants to equip dads for success and open up some difficult conversations about the American parenting landscape.

“We need to remember that dads are not side characters in our children’s lives,” says Carpenter. “We’re the hero. We are not the plucky little comic that comes in to get a laugh and play and go away. We are there forever. And it’s important that dads have that support to be the best that they can. And a lot of times, they don’t.” 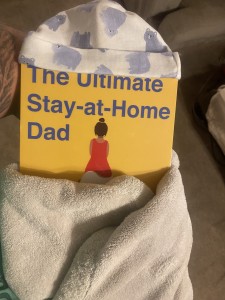 The Ultimate Stay-at-Home Dad, nice and bundled up and ready for parenting chaos. // Photo courtesy of Shannon Carpenter

Carpenter packs the pages full of his 13 years of experience on the job as well as advice from dads across North America. The punnily-dubbed “Because Dad Says So” bubbles scattered throughout the book feature tips from a variety of experienced dads. The “From the Dads Group” is a particularly special section carved out for Carpenter’s Kansas City-based at-home dads group, where Mick, Larry, Jake, and Mike get to duke it out on subjects like the best place to buy cleaning supplies.

The Ultimate Stay-at-Home Dad is an essential tool for any father to have in his arsenal—a tool that Carpenter himself didn’t have when he began his journey as a full-time dad.

“[The idea for this book] was actually a little bit rooted in anger,” says Carpenter. “[Advice and parenting manuals], everything is geared towards the moms, and dads are kind of ignored. The advice was always on the pretense that mom is an obstacle, the baby’s a problem, and, ‘How quickly can I get back to my golf game?’ There was nothing about how to do the day-to-day care. There was nothing about pulling your fair share of the mental load. And I got madder about that.”

Carpenter was especially bothered when he saw this issue play out in real-time as he and his wife, a full-time working professional, talked to other parents and mothers about their division of labor.

“The question that my wife gets asked all the time is, ‘How do I get my husband to do that?’ And then [other moms] point at me. ‘How do you get him to do that?’”

Carpenter acknowledges and understands the overwhelming pressure placed on mothers to carry the brunt of the emotional and physical load of child-raising. And in many ways, his book is concerned with misogyny in parenting materials by tackling a complimentary issue: “We don’t need to expect dads to help, we need to expect dads to do their share,” Carpenter points out. “And most dads want to. We’ve just got to show them how.”

Since Carpenter began his full-time dad gig 13 years ago, the number of stay-at-home dads has been on the rise nationally. Precise estimates from the last decade vary across sources, but data from the Pew Research Center shows that twice as many Millennial fathers are stay-at-home parents or primary caregivers (6%) in comparison to Generation X (3%).

The U.S. Census Bureau suggested that there were two million stay-at-home fathers in 2012, but they largely disqualified parents who had a side-hustle or part-time job even if they were primary caregivers for their children. According to a 2020 article from Healthline on stay-at-home fatherhood, “The National At-Home Dad Network argues that stay-at-home dads should not be solely defined by those who don’t work at all outside of the home … Using U.S. Census data, [they estimate] seven million fathers are a regular source of care for their children under the age of 15 in the United States.”

When even government data discounts fathers who are primary caregivers, it is perhaps unsurprising that dads do not have nearly enough materials tailored to their parenting needs, despite having unique hurdles. For example, how does a dad change a baby’s diaper when there are no changing stations in the men’s restroom? And when men’s mental health is under-discussed on a national scale and fathers who stay home with their children face derision for being “weak,” how can a stay-at-home dad raise their children with emotional acuity?

“In the stay-at-home dad world, there’s a misconception that we’re super effeminate, or that we’re not real men, and all this toxic masculinity bullshit,” says Carpenter. “I can legit build a deck and redo your bathroom one day, and bake a cake and sew a pillowcase the next. Because dishes don’t care what gender you are, they’ve got to get done. And the idea that dad is helping or dad is babysitting is just crap. We’re there to parent.”

To tackle these issues throughout the book, Carpenter has a classic ace in the hole: his dad jokes.

“Being an at-home dad means that you get no sick leave and no vacation days and that someone is going to hit you in the balls.”

“I can reach dads through humor. That’s how we make our point. [Dads] like jokes. We like some intensity with it. That all drives home the lessons that I want to teach,” he says. 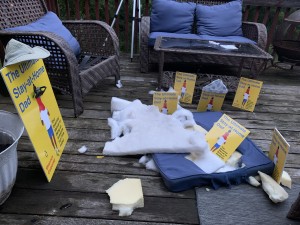 The life in times of a writer, parent, and dog owner. Otherwise entitled, “Oh no.” // Photo courtesy of Shannon Carpenter

Don’t be concerned when you find yourself chuckling over a tale where Carpenter kills a bunny that the family dog mauled with a shovel—and his daughter catches him doing it. The book is peppered with dark humor, from Carpenter calling himself a “motherfucking dad” to gems like this fatherly pep talk: “Being an at-home dad means that you get no sick leave and no vacation days and that someone is going to hit you in the balls.”

At the same time, Carpenter admits that he will at times use humor as a shield to “protect himself” as a dad and as a writer, and stripping that veneer away for more emotionally vulnerable moments was far from easy.

In the fourth chapter of The Ultimate Stay-At-Home Dad, he writes about dealing with the death of his best friend/brother-in-law at the same time he secures his outstanding book deal with Penguin Random House. Not long after getting the news, he takes a road trip with his kids where they ending up driving over and killing literally thousands of butterflies. Carpenter wrote and rewrote that page and a half six times over the course of many months with the help of his editor, family, and Kansas City dads group.

Carpenter adds, “And even within my dad group, it’s really hard. Those conversations are said in whispers, in a corner during playgroup, but the truth of it is you have to pay attention to your mental health. And in the dad world in general, you’re going to be isolated most times and a stay at home dad even more so.”

Even he had to muscle the pages out behind the scenes, he talks confidently in the book about the need for dads to access therapy. While reminding them to “separate the ‘you’ from the ‘parent’” he admits that, “This isn’t even my own advice. This is what my therapist told me. Hell yes, I’ve gone to counseling just to check up on my own mental health. Shit gets complicated.”

While Carpenter’s book is chock-full of how-to’s when it comes to fighting isolation as a full-time dad, he has a particularly special tip for Kansas City dads.

“The downtown library with Claire Hollander—she’s mentioned in the book, and she is the absolute best place for a stay-at-home dad to go every month. She helped grow our [local dads group]. They have an amazing children’s library down there, and she will take care of you and your kids, and teach them to love to read. All of my kids have tested off the charts for reading, and it’s because of the Downtown Kansas City Library.” 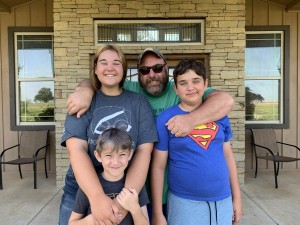 Shannon Carpenter with his kids. // Photo courtesy of Carpenter

Carpenter also emphasizes how it is crucial for dads to find connection and male friendship, as he found with his own local dad’s group. As we get to know this charismatic crew throughout the book, cringing (but also cackling) when Larry shaves his toe off with a lawnmower and delighting at Mike’s unrelenting roasts of Carpenter, it becomes abundantly clear how their friendship has been a lynchpin in Carpenter’s journey.

“The truth is those four other dads made me a better father, and they made me a better man And the debt I owe them cannot be repaid,” says Carpenter. “I’ve seen them do things that I could never do. I’ve seen them handle situations that would have broken me. And to be able to open up with guys like that and not feel weird about it (as much) has been life-changing for me.”

If you’re a local stay-at-home dad, this group is open to you, as well.

“The Kansas City group needs new members with babies,” says Carpenter. “That’s what we need, those new stay-at-home dads. All of our kids have grown out now, so we need a new group to come about. That is ripe for someone to take over, and I would help you move it along and give you all the advice and the connections.”

The Ultimate Stay-at-Home Dad will be available in stores on October 12. Pre-order the book now through the publisher’s website. (And you don’t need to wait for Father’s Day. There’s some Halloween-level material in here. They literally kill thousands of butterflies and a bunny with a shovel.)

If you’re a dad looking for some extra support, check out City Dads Group, the national network that Carpenter’s local group is a part of.