Author Ben Apatoff on the enduring appeal of Metallica 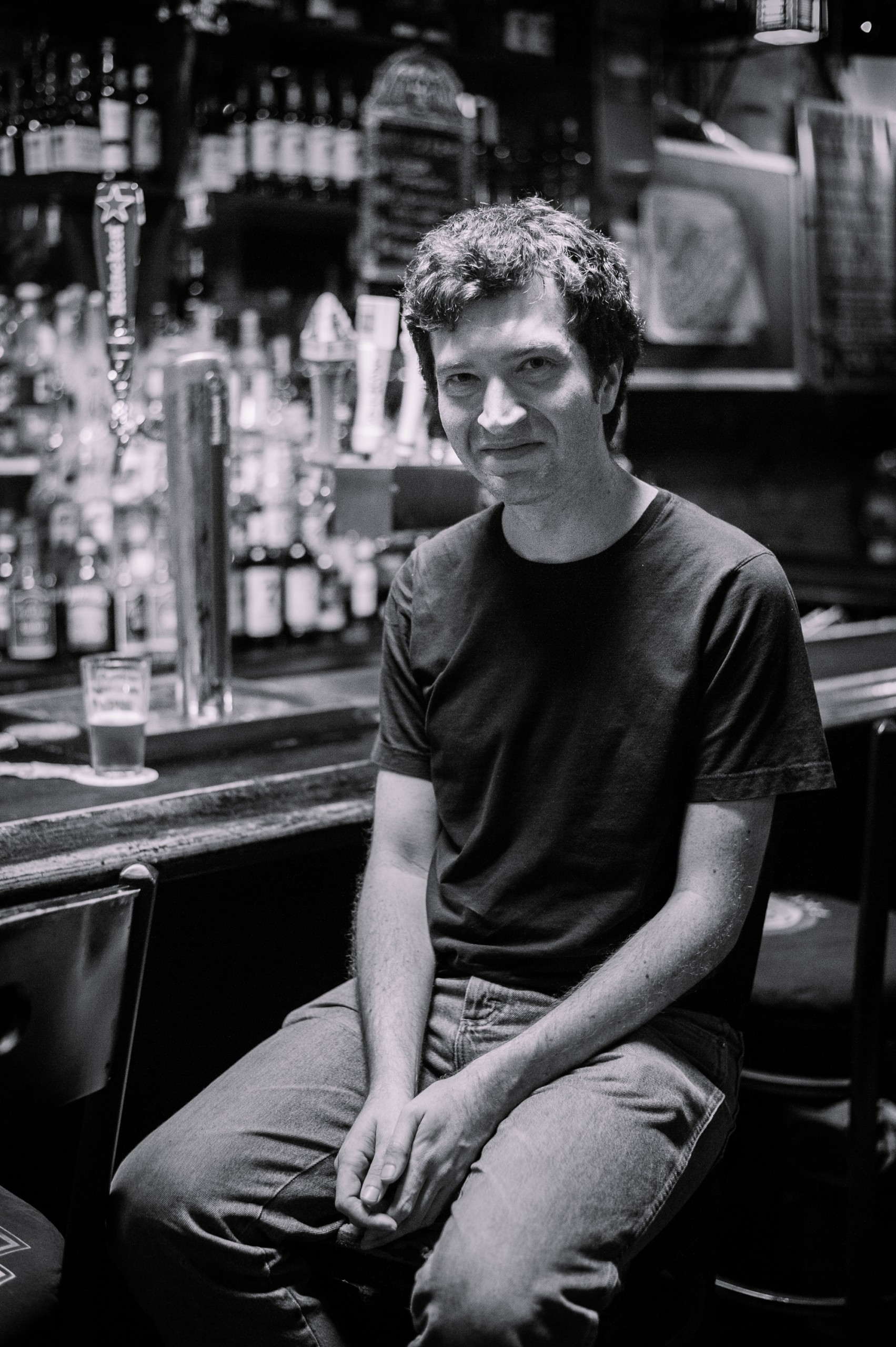 Metallica: The $24.95 Book by Ben Apatoff is out this week from Backbeat Books and it’s a deep dive into the music, musicians, and inspirations behind the work of the world’s biggest metal band. The author looks at the stories of Metallica’s individual members, the bands and creative works from which they’ve drawn, and takes a deep look at the thrash titans’ extensive discography and videography.

While one could say that this has been a lifelong journey, given that the author was born the same summer Metallica released their debut LP, Kill ‘Em All, the process of writing his book took a full four years, finishing up during the pandemic.

It comes from a place of fandom, but while that means that Apatoff’s book is enthusiastic and intense, it’s also brutally honest in a way that a dilettante could never be. Metallica: The $24.95 Book will grab the attention of the most devoted fan, while also bringing in those who are only tangentially familiar with the long-running act.

I spoke with Apatoff by phone ahead of the book’s release, and we dug into the work it took to bring Metallica: The $24.95 Book to your shelf and the discoveries the author made along the way. 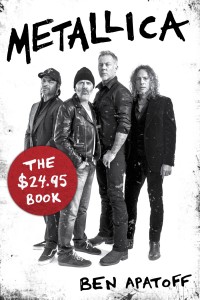 The Pitch: In terms of getting to dig deep into this stuff, what were some of the things that you found most intriguing when you were going and reading these books and watching these films that you hadn’t encountered before?

Ben Apatoff: One thing that’s surprised me that wasn’t initially going to be in my book was how much of James’ lyrics come from his religious upbringing. He is a guy who famously had sort of a spiritually abusive household and tore himself away from Christian Science and came up with these secular agnostic songs. Like a lot of great artists, like Nick Cave or like Sinead O’Connor, he took some of the poetic parts of that literature and to his upbringing. He uses Christian mythology to express himself in a way that I thought was interesting. I guess I’d seen hints at that, but I’d never really seen that until I went in-depth into the book.

I read the book Naming Names, which inspired the song, “The Shortest Straw.” There was a part in that book about this disillusioned communist book that was written by all these famous authors, like Arthur Kessler, Richard Wright, and a bunch of other guys and that book is called The God That Failed and that got me thinking that [Naming Names] might have inspired more than one Metallica song.

I remember reading they had Naming Names in the studio and no one even mentioned that there’s another book and it’s called The God That Failed and that’s another Metallica song. Just looking for little clues like that and finding out that if you’re a big Metallica fan like me, you kind of see the world through them.

You dig really deep into finding interviews and things like that, both out in the general press, but also digging into their own ‘zine, So What? What is it like, immersing yourself? What were some of the things you discovered from contemporaneous interviews versus what the official line is considered these days?

The interviews changed a lot over time. Another thing that wasn’t initially in the book that surprised me from interviews was how much they how much their fashion comes up early on, ’cause they’re kind of thought of as anti-rockstars. People talk about how the other rock bands wore spandex and makeup and Metallica dressed like their fans. I think they changed the rules so drastically for the concept of what metal bands looked like that we all kind of take it for granted now, but if you look at early interviews, some of them are like, “Well, why are you dressed like that?” and “What do you have to say about fashion?” and something like that was a big surprise.

Going through So What?, I loved reading their influences. People often call them to talk about other metal artists or how they’ll show up for tributes to Lemmy or someone like that, and reading this and seeing them talk about Tom Waits or Bill Withers, that was a lot of fun. Seeing the way things have changed over the years and seeing things that were considered scandalous in the ’90s and are not anymore, like people are outraged that one of them got a picture with Garth Brooks or that Kirk and Lars kissed in a picture, but you see how people were writing into So What? furious about it and just seeing how ideas have changed completely over time was a lot of fun.

I think it’s very noteworthy that, even as thorough as your book is, you make note in your afterword that there are so many things that you didn’t even get into, like Blackened whiskey, which is a fascinating subject that could have been an entire chapter, in and of itself. How did you winnow down and decide what tangents you weren’t going to explore?

I started writing and suddenly, some things became more apparent. Combing through interviews and seeing some about fashion or stuff about the things that influenced their songs, like books and movies, and there are things like–Metallica almost has, at this point, a KISS-level amount of merchandise and I totally respect that. Some people are into that and collect that and do that. I think it’s cool. I think they get a lot of great artwork for it, but that’s not something that I had a lot to say about for the book.

I mean, I talk about how they have the “Spill ‘Em All” onesie. They make stuff for babies now, ’cause their fans are growing up and having kids, but it really came down to what it felt like there were things to say about and things to write about that another fan of the book could get well in-depth. I would love to read a book about their merchandise or Blackened whiskey and stuff like that, but it came down to what was my kind of Metallica fandom.

I’ll also say that Metallica is a little bit like Elvis at this point, where they’re so massive that people love them authentically–and I don’t say this doesn’t make you a real fan or anything like that–but people authentically them for their image, for their look, and for their persona. I’m a teacher. I’ve had students wear Metallica shirts and they love what this stands for. This means politics, this means rebelling and this means adolescence and it really means something to them–the image–which I totally respect and is totally cool, but I want to focus on the artistry and the music.

Metallica seemed to be one of those bands that had a moment during the pandemic. They had many moments actually, because they had Metallica Mondays, running full archival concerts for several months on YouTube. I assume most of the book was done long before that arrived but did getting to see some of the very good versions of some of the shows affect you in any way–other than just being a fan and getting to see some pretty cool shit?

Working on the book during the pandemic was stressful. I was missing deadlines and I was beating myself up over not getting it done when I had more time at home. You think like, “Well, I’m at home. I can just work on the book now,” and then you’re just refreshing the news and seeing that come up. Watching those Metallica Monday shows kind of kept me–it would come on every Monday and I would see what show it’s going to be and watch it. It kept me grounded and helped me. The prevailing thought was just like, “What an honor to write about this band.”

No matter how stressed I got about the book, just seeing those guys come out and strap on their instruments from in the early ’80s, opening up for Raven to the Yankee Stadium Big Four show, just watching that was, “Wow. What a band.” Writing the book made me feel even closer to that, getting in-depth with these guys’ lives and their inspirations and how they made the music.

James said something when they played a pandemic show for a movie drive-ins and he said something about, ”I know you’ve all been hoping for another show and music is going to us get through everything—even this.” The Metallica Mondays were kind of like that for me, when I was working on the book.

Metallica: The $24.95 Book by Ben Apatoff is out this week from Backbeat Books.