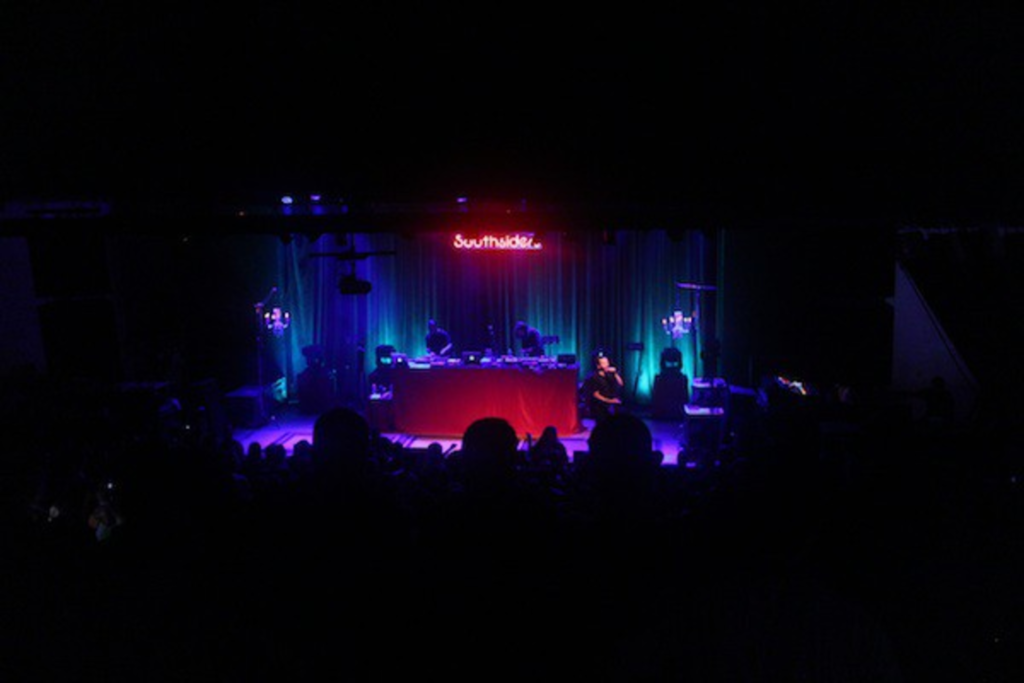 Veterans MC Slug and DJ Ant, otherwise known as Sean Daley and Anthony Davis of Minneapolis rap duo Atmosphere, have been performing together for more than 18 years. As time progressed, they have evolved their bare bones “MCs plus DJs” setup into a fully functional band, instruments and all. However, on their current “North of Hell” Tour, they have stripped back to the basics. Apart from the lights, Atmosphere’s present setup consists of a long, covered table for two DJs (Ant included) and Slug working the rest of the stage floor. Last night at the Granada, this bare-minimum approach presented itself mechanically, too: Through restrained stage banter and self-hyping, the Atmosphere’s performance was a more fast-paced, down-to-business showing.

Though this tour is in support of Atmosphere’s recent full-length, Southsiders, the set contained songs both from that album and from a wide range of the group’s catalog. Atmosphere entered the stage to an instrumental track called “Breakaway” and segued seamlessly into the new-ish “January on Lake Street.” Without delay, they shifted into their next tracks “Puppets,” where the audience is asked to throw up their “scissors” (peace signs, in case you were wondering), and the hard-hitting title track to their second album “Godlovesugly.”

Following that song, Slug took a brief pause to greet the audience and introduce DJ Ant. It was a brief exchange, and a moment later, Atmosphere reignited with the new, satiric single “Kanye West,” which asked the audience to throw their hands in the air if they really do care. The next song, the hangover anthem “Sunshine”, dropped off on the adrenaline, opting instead for an easy, infectious groove. This slowdown didn’t last long as Slug began to rap about a car pulling up playing their old jam, and the pace immediately doubled with “Reflections” (which, being from their 2003 release Seven’s Travels, is indeed an old jam). Within a couple minutes another quick shift transitioned into “Modern Man’s Hustle.”

One highlight of the evening came with “The Woman With the Tattooed Hands,” a visually evocative track that, despite its delicate start, managed to build up the energy level further. In the following 20 minutes, Atmosphere sprinted through new cuts “Mrs. Interpret” and “Southsiders,” as well as some older numbers like “Shoulda Known,” “Happy Mess” and the emotionally weighty “Waitress.”

As the crew was about to perform its 19th song of the evening, Slug stopped to ask the audience the obligatory question: “Are you all having a good time tonight?” The packed crowd, which had been enthralled throughout Atmosphere’s lengthy set, responded enthusiastically. Looking pleased, Ant cued up another new jam, “Hell,” subbing “Kansas City” in place of “Minneapolis” in the lyrics. This tactic had been used many times throughout the evening, and the audience seemed to love the attention more with every callout.

“God’s Bathroom Floor” kept the party rolling, but the two following selections “Lovelife” and “Flicker” felt flat, a bit like time fillers – which they were, perhaps, because Atmosphere exited the stage briefly ahead of the expected encore. “Say Shh” was followed by a five-minute freestyle rap, listed on the setlist as “Bitter Free.” In this freestyle, Slug called both openers (and fellow Minneapolis natives) Prof and Dem Atlas back to the stage. While Slug outclassed his tour mates in proficiency and flow – he’s got nearly two decades on the dudes, after all – Dem Atlas proved he was more than capable as an MC despite his apparent youth, and Prof’s humor and jerky timing left the audience cackling long after the beats stopped. In all, Atmosphere proved despite a veteran status, this group is still a champion in its category. Here’s looking forward to another decade of music from this talented act.

Leftovers: The final number of the night, as well as one of the most anticipated singles, was “Trying to Find a Balance.” And just as the song started, as if on cue, a girl in front of me toppled to the ground. She seemed fine, but she couldn’t have picked a better-timed moment to let the alcohol (or heat, because the Granada was sweltering with all those bodies) get the better of her.