At the Unicorn, Logan Black shares a personal Bond 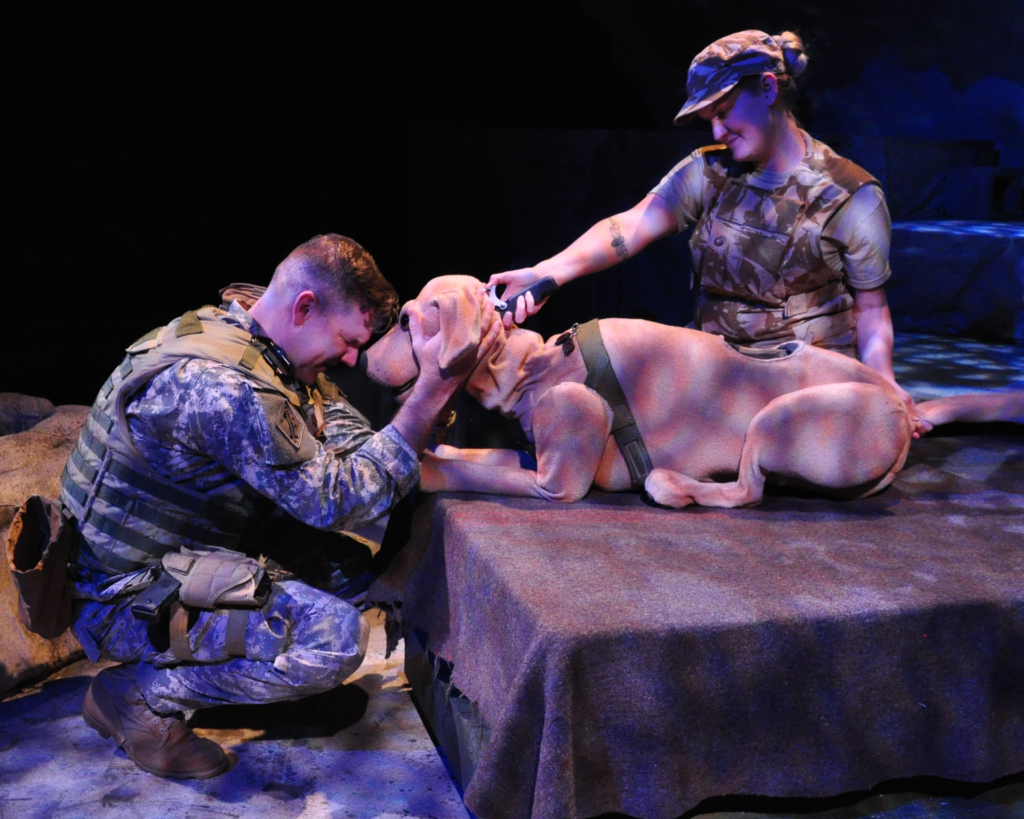 Logan Black knows how to tell a story. His Bond (a Soldier and His Dog), at the Unicorn Theatre, in collaboration with Mesner Puppet Theater, is a compelling personal account of Black’s experiences as a specialized search dog handler in Iraq from 2006 to 2007.

For his vivid and moving first-person storytelling, The Pitch awarded Black Best Original Play by a Local Playwright in 2015 for his then less-than-an-hour debut Bond at that year’s Fringe Festival. The work-in-progress continued to morph and grow, to an hour, in subsequent performances (at the Fishtank in 2015 and as part of a Pets for Vets “Fringe Presents” in April 2016).

Now the one-act, starring Black, has been expanded to 80 minutes. Directed by Cynthia Levin, it has the accoutrements of a theater’s resources and has undergone some textual and production changes.

It retains its power. Black’s story takes us from his enlistment in the Utah National Guard while in high school, in 1996, to his becoming a combat engineer after 9/11 and, eventually, a member of the Mine Dog Detachment. The search dogs’ ability to discover weapons, ammunition, and explosives make them valuable assets — and both them and their handlers targets. How and why Black ends up in Iraq (a noble endeavor, he thought at the time) and how his service molds both him and his search dog, Diego, and their increasingly emotional relationship are at the center of this work.

The talented Black is an energetic and engaged performer. “This show is all direct address,” he told The Pitch in 2016, “so instead of another actor, I partner with the audience.” In this production, he shares the stage with a Mesner Puppet (designer Mike Horner), handled by the skilled puppeteer Erika Lynnette Baker. In previous productions, Diego existed through Black’s sharply depicted narrative, in which everything he and Diego did could be clearly visualized by the audience. The puppet, whose puppeteer virtually disappears to background, adds an element of realism (even distraction, at times, from the narrator).

In lengthening the play, Black has added exposition at the forefront and performed other nips and tucks and enhancements to the text, augmenting some scenes and lessening others. This provides additional depth, though it somewhat slows the story’s progress at the outset (at one point, a bit too much). But it may not be a bad thing to segue more gradually to the hardest elements to portray. This play is no dry Middle East desert but a lushly written and performed boots-on-the-ground enactment of the kinds of memories that don’t easily dissipate with time.

The rustic all-purpose set (Kelli Harrod) transforms from a Fort Leonard Wood training facility to an Iraq camp accommodation to a backdrop for forays in the Iraq field. Projections (Emily Swenson) are additional visual aids to Black’s abundance of rich detail.

“I can’t think of it as my own story too much,” Black said in that 2016 Q&A. “If I do, there is a danger that I’ll trigger my PTSD or get so lost in a memory that I won’t know I’ve gone off the script.” Apparently, that happened when he first rehearsed the original show four years ago. “That’s not theater,” he said.

Bond most definitely is theater — the kind that has repeatedly drawn me to the art form. And it possesses intellectual and emotional pull. Whether this excellent “world premiere” is a work-in-progress or in its final form, I would see it yet again.

Bond (A Soldier and His Dog)