Liking and sharing the incredibly Instagrammable food at the Russell 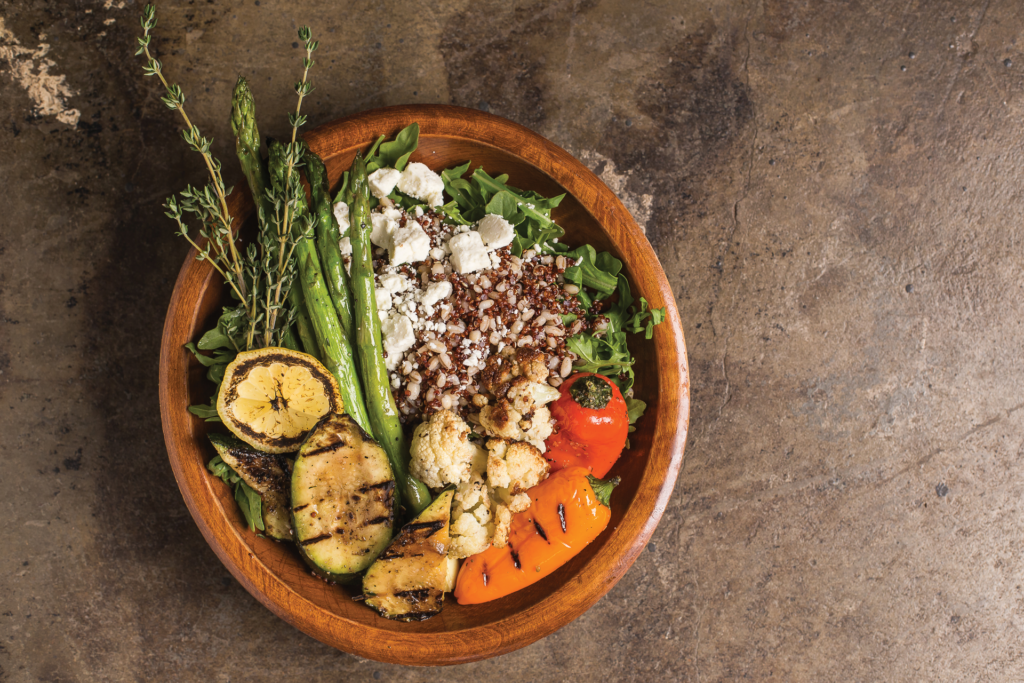 High on the list of unmitigated delights, right next to a surprising meal and a good lay (or vice versa), ranks something a little less tangible: having one’s hunches proved thoroughly, recklessly wrong.

For a long time, I had a bit of a chip on my shoulder about The Russell. Sure, locals have raved about the lunch-only eatery since it opened in February. But I kept hearing the same comment, a comment that never fails to make me retch politely into the back of my mouth like a housecat that’s scarfed too much kibble: “It’s so Instagrammable.”

They’re not wrong. Chef Amante Domingo and his business partner, star baker Heather White, revived the 3141 Main St. space on their own, and the new vibe is simultaneously moody and welcoming. Dark walls and brown leather meet fresh flowers and natural light. Shelves drip with old typewriters, and tables are stacked with more succulents than a Pinterest wedding (though given the building’s previous tenant, Russell Florist, this feels more homage than cliché). The pair’s eye for composition extends to the food. Sandwiches are photo-ready mosaics of bright flavors and textures; salads burst with grilled vegetables and heirloom tomatoes more colorful than a bag of Skittles.

The Russell is, in a word, beautiful. But unlike so many other places designed for the Age of Influencers, the restaurant actually has the substance to match its style.

It starts with the kitchen’s focal point, a wood-fired behemoth of a grill Domingo designed and constructed himself. Nearly every dish on the small but intricate menu involves the grill in some way. Salad toppings are charred or caramelized over the fire; pans of vegetables crisp beneath grilled chickens, ready to catch the drippings like hungry baby birds; sprigs of rosemary and thyme hang suspended from the hearth, steeping in the wood smoke like tea. The grill is part of the ambience, giving The Russell a seductive smokehouse scent that may as well be called Kansas City Musk.

The Russell’s signature salads are creative enough to make you excited about eating salad. The Heirloom (pictured above) was an appealing blend of prismatic textures and flavors: ovals of grilled zucchini, ribbon strips of tender asparagus, obelisks of charred mini sweet peppers, and smoky-sweet halves of Brussels sprouts tinged a deep walnut brown. Red quinoa and pearl couscous added a pleasant chew to the bowl and sponged up the bright, tart sun-dried tomato vinaigrette.

But after trying the grilled half chicken, it became hard for me to imagine ordering anything else. I stan for dark meat — and the leg and thigh on the half chicken are moist, crisp-skinned, and smoke-kissed — but the breast on this bad boy (girl) was tender enough to make me a convert. Rarely have I sampled white meat this juicy. The spice rub added a flavor boost without detracting from the main event, and a bed of arugula absorbed those rich, clear juices to make a garnish worth scraping from the plate. This is a hearty lunch, and it’s worth every calorie.

Perhaps because of that, I could take or leave the accompaniments — flatbread, avocado, and lime, all grilled. I have long believed hot avocado to be a waste. Warm an avocado, and it transforms alchemically from magic vegetable butter into a sad husk of its former glory — like Coors Light, or post-2000s U2. (Yes, I am aware an avocado is technically a fruit, just as anyone tempted to write in about it is technically a bore.) And the “grilled flatbread” turned out to just be three limp flour tortillas in a trenchcoat.

The Russell offers an off-menu special plate each day as well as a soup. (I enjoyed the curry squash soup, which was light and vegetal.) On a recent visit, the special was a platter of three “street tacos,” each stuffed with succulent pulled pork and topped with onion, cilantro (whole stems! but why?), queso fresco, and a vibrant tomatillo salsa. The grilled corn served alongside was mellow and sweet, topped elotes-style with fine-crumbled cotija cheese, a rich crema, and a spicy-tart, rust-red spice blend. The only detractor? Those same tortillas (flour! but why?), which tasted storebought.

The Sumac Tenderloin was a slight miss, but to help you calibrate what a “miss” is here, I still cleaned my plate. The beef was a little mealy, and the sumac (a tart, unmistakable spice I adore) was undetectable. Still, the bright drizzle of avocado-green chimichurri played handsomely with the charred Brussels sprouts halves and tender fingerling potatoes.

I preferred the beef on the “Steak Chimi,” which layered that same assertive chimichurri with peppery arugula and charred onion goat cheese on a soft-textured baguette. Even if you’re not a fan of goat cheese, order the sandwich as-is; the freshness of the cheese and sharpness of the other flavors almost entirely masked any “goatiness.”

For now, The Russell offers a specialized brunch menu on Saturdays only, and it’s fairly traditional — eggs benedicts, biscuits and gravy, Belgian waffles. But even the classics here are executed with extra care. The BLT — a BELT, really — was surprisingly light-tasting, each element simple but wholesome: lightly smoked bacon, a bright avocado mash, and a perfect medium fried egg on a soft and supple onion bun. 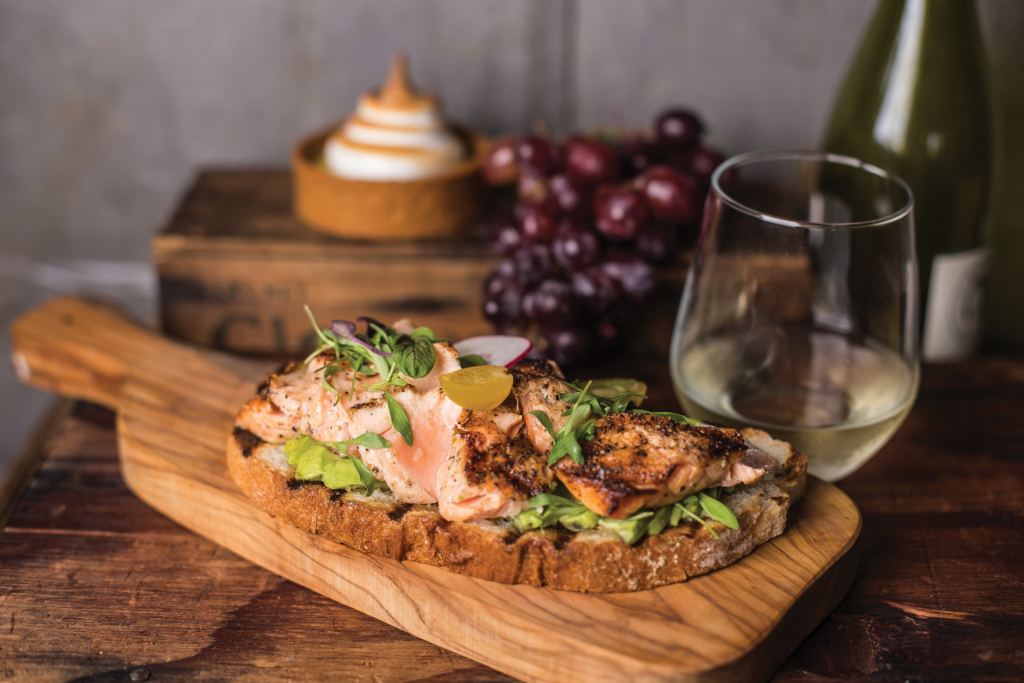 The salmon avocado toast (above) made a compelling argument for my generation’s allegedly ruinous taste for fine toast. The herbed salmon was perfect, fired until just opaque — the flesh was firm but not dry, moist but not mushy. A bright drizzle of lemon herb yogurt added a cold snap of flavor, and the grilled bread was thick-cut and hearty. If The Russell’s salmon avocado toast is the reason Millennials are living in their parents’ basements and delaying childbirth, I’d say it’s a fair trade.

Also good: the “loaded Bloody Mary,” which is a steep $12.50 but comes in an enormous jar sized for the hands of a Norse god. The mix in the one I ordered was flavorful, though not spicy, and laden with celery, grilled lemon and lime slices, two strips of lightly candied bacon, and a skewer of wood-fired shrimp.

White’s desserts, which are baked fresh daily, are almost universally dreamy — and when the food is this bright and fresh-tasting, it’s tempting to cap the meal with something rich. My favorite of the baked goods I tried was the lemon meringue tart. Every component was faultless, from the luxurious dollop of sticky meringue to the bright-to-bursting lemon curd to the crown of plump, tender blueberries nearly exploding out of their skins. 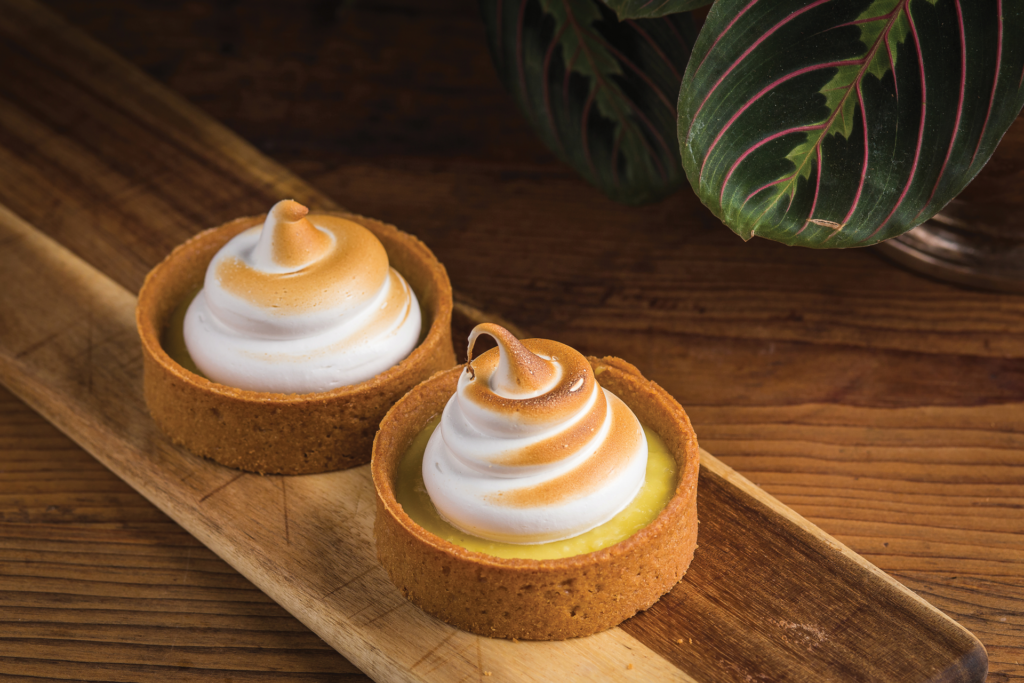 The olive oil chocolate chip cookie is justifiably popular, tilting between crumbly and chewy with a stiltwalker’s balance. It’s also roughly the size of a disc golf Frisbee, which makes it ideal for sharing if you have more willpower than I. When I tried it, the flavors were divine: a little salty, a little buttery, a little fruity, a lot chocolatey. I don’t have much of a sweet tooth, and yet I’ve craved that chocolate chip cookie with the doofy intensity of a Cathy cartoon since I’ve had it. I can see The Russell from my office window; I’m looking at it now. What is summer, I’m bargaining with myself, if not a chance to get a head start on one’s winter body?

Such is the hypnotic pull of Domingo’s and White’s creation. This place, this menu, is solid from top to bottom. As I reflected on my visits, I kept casting about for something to critique. The prices? Steep for lunch, maybe, but reasonable for the quality and novelty of the food. The atmosphere? If I call it “Hipster Cracker Barrel,” I’m telling you the truth, but telling it slant. Yes, there are wagon wheels, antique sewing machines, wingback chairs and exposed copper pipes. But there’s also a coziness that feels more thrown together than slickly applied. (On all three of my weekday lunch visits, the dining room was packed with grinning business casuals, but I never had to wait long. Domingo and White have embraced a hybrid quick-service model to keep meals streamlined: order and pay at the counter, grab a seat, and a staff member will bring food to your table as soon as it’s ready.)

On my last visit, I plopped down at one of the broad communal tables to wait for my food. When it arrived, I pulled out my phone to snap a few shots — I always take photos of my review meals so I can overdescribe them later. An older woman in the seat next to me leaned over. “Are you Instagramming?” she asked conspiratorially.

I was about to explain myself, but then thought better of it. The salad was cute. The table was cute. The woman and her Ann Taylor twinset were cute.