At the Belger, a look at the architectures of victory and decay 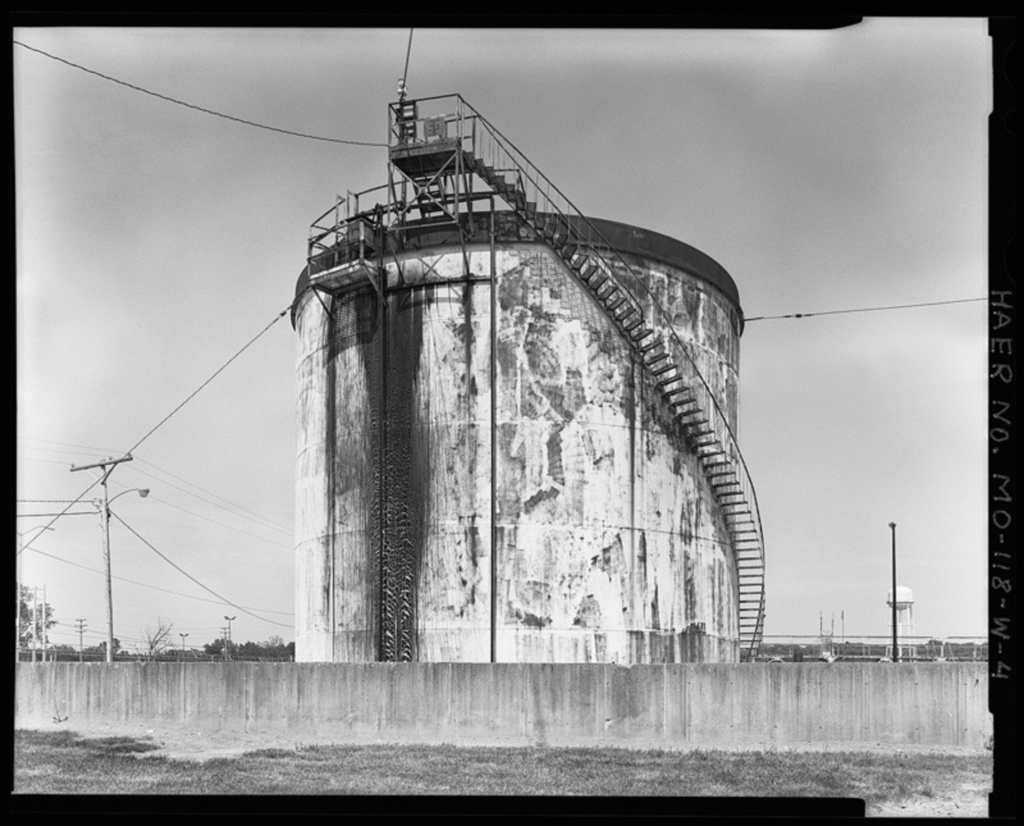 The sprawling campus stretches almost a mile alongside Bannister Road, just east of Troost. A brick wall close to the street is decorative but not without function. What the barrier encircles has been a military-industrial nexus for generations, including a Department of Defense dump and a production facility for nuclear-weapons components. The stories from people who have worked at the site are as varied and mysterious as a season’s worth of X-Files plots.

Mo Dickens, gallery assistant at the Belger Arts Center, has heard more than a few of those stories since February, when the gallery opened an exhibition centered on the first structure erected on what was once a racetrack in unincorporated Dodson, Missouri. The Belger routinely mounts well-curated exhibitions that draw from its own vast collection. (The striking William Christenberry show there now is a representative example.) This time, it has opened a show whose centerpiece is a masterwork that drew from its host community. Many who have viewed it can’t help but recall aloud their own memories of the place, whatever it was when they worked there.

The show’s title, Velocity of Change: The Evolution of Albert Kahn’s Pratt & Whitney Plant in Kansas City, is lengthy and academic, but it’s an accurate summation. The texts accompanying the photos in this show, also long and scholarly, make a convincing case for a work of architectural genius.

Kahn built his reputation designing factories for the U.S.S.R. and was behind the success of American giants Packard, Chrysler and General Motors. When he died, in December 1942, The Detroit News called him “the fastest and most prolific builder of modern industrial plants in the world.” His last military project would turn out to be the plant here, after Kansas City won out over St. Paul, Minnesota, and Chicago to become the new branch of the Connecticut-based Pratt & Whitney Aircraft Corp.

The company is still in business, making engines and turbojet propulsion products, but its presence in Kansas City faded with the end of World War II, which was won in large part thanks to the Twin Wasp engine that powered U.S. Navy planes. At the height of production, 21,000 workers clocked in at the KC plant. It closed on V-J Day, September 2, 1945.

KC’s Pratt & Whitney plant was a marvel because it was built so quickly and with so little steel or even wood — materials needed for other parts of the war effort. Because it’s a federal site about to go offline for good, bureaucracy dictates that everything be evaluated and cataloged for posterity — per the National Historic Preservation Act of 1966.

That’s where pre-eminent local architectural historian Cydney E. Millstein comes in. She was commissioned to help prepare documentation of the site during its transfer out of federal inventory, and this exhibition represents four years of her work and that of Richard Welnowski, an award-winning filmmaker, digital media entrepreneur, and former Kansas City Art Institute instructor. All of that labor means that there’s a lot to read in the Belger’s smaller upstairs gallery — texts that accompany small black-and-white photographs of the plant’s construction, shots of empty work spaces (such as inside the engine-testing tunnels), views of the old racetrack, and an old site map.

Most arresting, though, are the large-format photos produced by Welnowski over the course of a few blazing summer days in 2011, under strict supervision of the site’s managers. In approximately 20 black-and-white images, he offers us a glimpse of something we’d otherwise be unable to see outside the Library of Congress, something haunting to behold even if you don’t at first know what you’re looking at. Devoid of human activity, except for a pickup truck and eerie signs hinting at exit locations or cryptic regulations, the photographs endow the geometry of the storage tanks, the functional yet elegant tracery of the piping, and the blocky anonymity of the test cells with respect for their functions.

The “West Boiler House” view contains so much detail that you might spend half an hour exploring its miniaturized secrets, as if scrutinizing an elaborate dollhouse. Pipes, beams, tanks, ceiling cranes and valves repeat in eye-pleasing ways. At the left of the image that Welnowski has composed are grids of light, waffles of sun coming down from an unseen window. Within this sprawling monument to wartime industry, his photos find peace in the surety of Kahn’s structural design.

Like the defunct steel plant rusting away at the top of the Blue River valley, or the Farmland fertilizer site whose corroded tanks east of Lawrence were finally torn down in late 2010, Kahn’s factory is not a work of beauty. It was built on practical rather than aesthetic principles, and time has rendered it bleak. Yet the place exudes an inner strength that can still be admired.

Something happened, something that’s over now — and not just the war. Like the fallen-giant U.S. auto industry, in which Kahn’s legacy is palpable, the rest of the nation’s manufacturing apparatus has changed radically in our lifetime. The photographs lined up for inspection here — artfully composed, careful in their contrast and symmetry and line convergence — show us the change as it happened locally. These are not “let’s document this place and be done with it” snapshots. They convey a certain mortal sympathy for a thing whose usefulness has come to an end.