At Plug Projects, every color five artists could think of 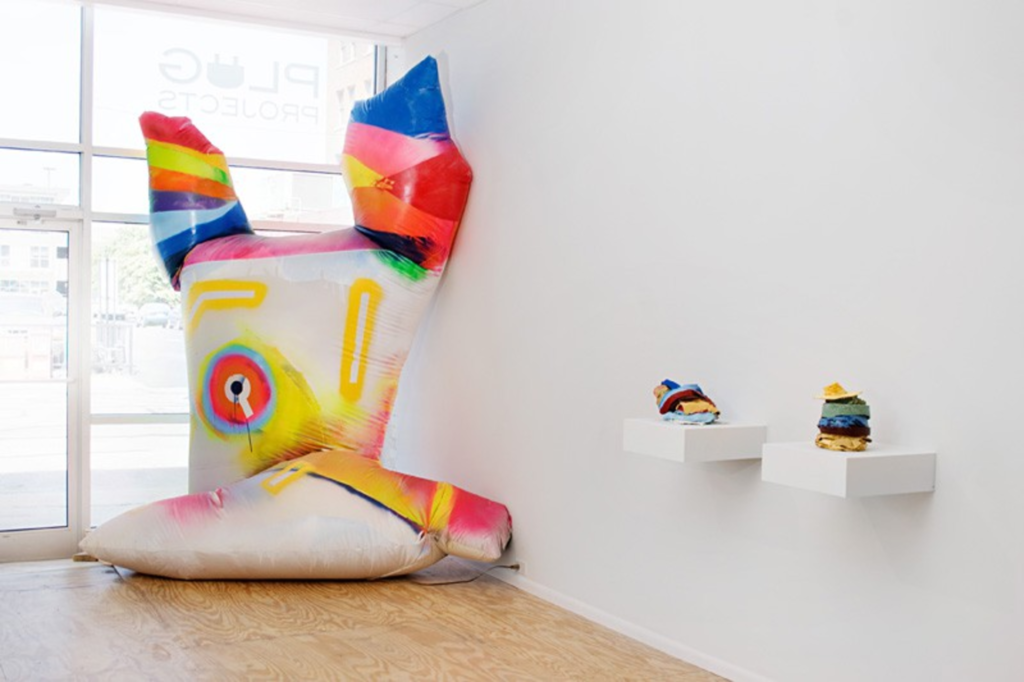 From a distance, Claire Ashley’s 10-foot, two-eared vinyl balloon doesn’t look like a clown. Rather, the object now in the Plug Projects window seems to have come from the rejection pile of a factory turning out bouncy houses for children. This painted, inflatable sculpture is the beckoning piece in Dramatic Chromatic, in the little white West Bottoms gallery run by five artists.

The fifth exhibition co-curated by Cory Imig, Amy Kligman, Misha Kligman, Nicole Mauser and Caleb Taylor brings together a dozen works that make sure, frank use of color (lots of colors, all together) to stimulate the eye. The vibrant hues — emerald green, shockingly pure printer’s magenta, supersaturated yellow, deep cobalt, primary red — might be expected to scream and clash. Here, though, they’re welcoming. The five artists (counting a publishing pair as one) present together well, and the works chosen for Dramatic Chromatic are arranged around the perimeter of the gallery rectangle to volley colors back and forth across the space. It’s a quiet set of multiple dialogues.

“Clown” is indeed a garish creature, with outlines that can be interpreted as eyebrows, and a four- or five-colored bull’s-eye that might be a single ocular opening or maybe a nose. Ashley’s inflatables (one called “Tall Tail” is propped up across the room in the diagonal corner) appear slick from afar but show some grit up close. The white vinyl, with its intentionally sloppy swaths of paint, doesn’t ask to be petted so much as it begs for a quick, hard punch.

Joe Bussell’s stacked discs of paint — dried-up latex remnants from the bottoms of cans he has used for other work (such as the three “Spit Series” paintings hanging nearby) — are likewise untouchable, but they’re honest. All they ask is that you see them as they are — just paint, cleverly arranged as sculpture. One is slumped over, as if tired; the other seems to be topped with a hat, complemented by a pattern of white crystals formed on the side of the green paint.

Named “Crystallized” and labeled as either warm or cool in tone are Jessica Labatte’s inkjet prints of arranged triangles. The shape ties together a number of the works in Dramatic Chromatic, and because of the flattening of what are paper objects here, it’s easy to spend a lot of time watching these trompe l’oeil pres­entations as they seem to dance.

There’s no mixing in the works here, with the exception of Kim Eichler-Messmer’s “Color Wheel Quilt.” Here, in a splendid piece spanning nearly 7 feet, is color itself, in 144 different saturations, all individually hand-dyed through Eichler-Messmer’s masterful process. The wheel is a beautiful study, and she reports on her blog that she has plans for an even bigger, more meticulous one.

For Kansas City gallery­goers, Bussell and Eichler-Messmer are probably the only known artists. Among the less familiar names are the co-editors Amanda Curreri and Erik Scollon of Color&Color books. Three are on display at the gallery, including the latest, C&C#3: Red&Green, which debuted at the opening. It’s a curious thing to design around two theme colors, and the books themselves also introduce artists whose works prompt further exploration.

Overall, Dramatic Chromatic immerses us in a prism of possibilities, a place where narrative, figures and context are stripped mostly away, for the enjoyment of pure color.