At Kiosk, Cristina Muñiz’s My Hand / Mi Mano shows a rising painter on a roll 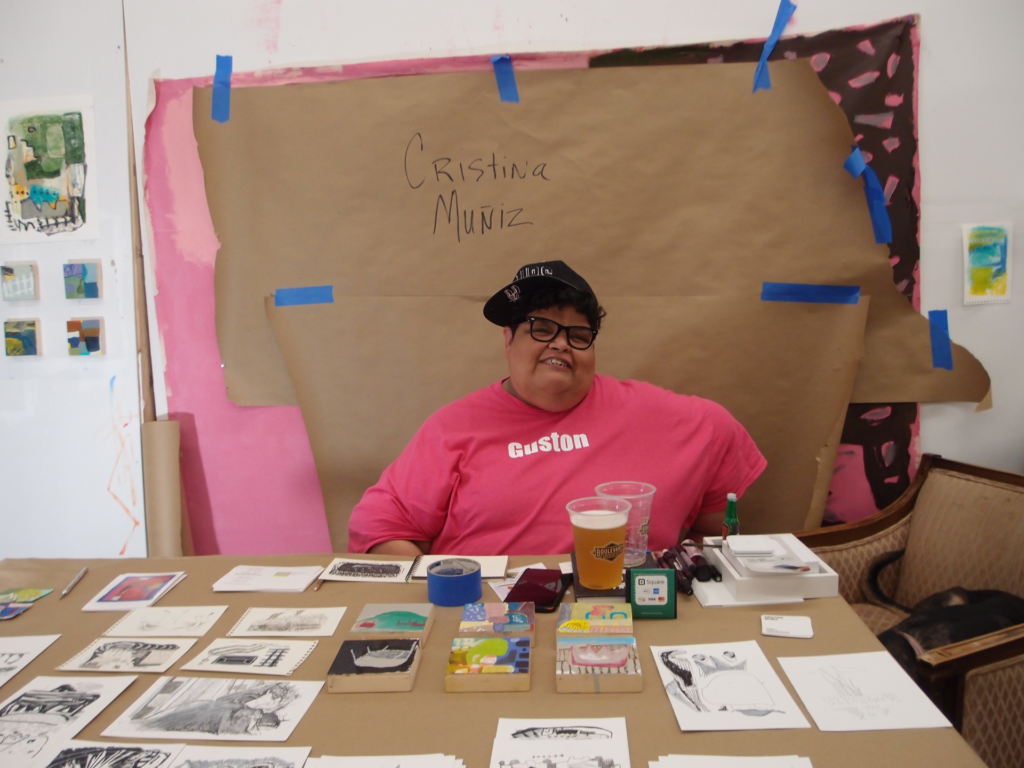 The first time I met Cristina Muñiz, she was gallery-sitting at la Esquina, and her own art was nowhere in sight. A requirement for Charlotte Street Foundation studio residents is to spend time staffing the organization’s gallery shows, and that’s what she was doing that day. But our conversation eventually landed on her practice, which falls into the category of abstract painting.

That discipline leaves some viewers imagining themselves at a disadvantage: We imagine that what’s not figurative must be harder to understand. Assuming we have access to the artist, she might be at a disadvantage, too, should she address our questions. Painting is a visual medium; why let words complicate the vision or introduce layers of potential misunderstanding? Why explain?

“When I talk about my work, it usually comes up, my hand,” Muñiz tells me the next time we meet. It’s a busy, increasingly well-practiced hand. Since our first conversation, I’ve seen her art in a couple of shows, at Paragraph and Vulpes Bastille. On this day, in early June, she’s getting ready for My Hand/Mi Mano, her first solo show in this area, at Erin and Eric Dodson’s Kiosk Gallery, in Columbus Park. A series of smaller, rough-edged, unstretched canvases are laid out on the floor; other paintings hang on the three walls of her section of the Drugstore Studios, stashed on shelves, hidden under brown paper.

Muñiz is a painter’s painter, interested in brushstrokes, in the paint itself. And asking her to talk about her art is almost redundant. She’s an expert at visual narration — her images enter your eyes and go straight to the part of you that shares an experience or a feeling with what you’re looking at.

That storytelling talent has taken time to develop. Some of her earlier art, she says, may have been nice to look at, but those paintings were “hit and misses.” She largely means work made in her 20s and early 30s, when, she tells me, “my narrative wasn’t really there.”

For the viewer, that narrative isn’t necessarily obvious. Yes, there are titles, but Muñiz will tell you that these are just beginning points, a cue to take your time looking at the piece.

“Now that the work is growing with me, I feel more equipped to just give it a title, leave it there in hopes that the viewer’s just going to spend a little time with it,” she says. “I don’t want it to be so vague or so minimal that it’s just too wide open. I want it to be inclusive to everyone who sees the work or who can appreciate the work, but let them kind of see their own thing.”

You can encounter a large canvas like her “Monkey Grass Memory” and not grasp all that she intends. But can you find an element that looks like a swing set? Can you pause to take in the overwhelming amount of rosy-taupe quadrilaterals extending from top left to bottom right, concealing and revealing other shapes — like stairs, like stonework — contrasting with a color that might be grass? Do these things trigger a recollection of your own childhood? For me, they do, and I’m glad that this painting, which Muñiz started a while ago and decided to return to, is part of the Kiosk show.

In the studio we look at a sketchbook piece, a thought written down: “Everywhere we went we took the ghetto with us.” It’s another starting point, maybe something she’s seen, a story she’s heard all her life, a memory someone shared. “That’s the first drawing of it,” she says. “Anything else is an active present drawing of the memory of the first drawing. What can be real is putting myself back into that state, the memory of that drawing or that thought. That’s real to me, in this new moment. Then, this is the new thing. It’s not more than or less than, just a new translation of my narrative.” 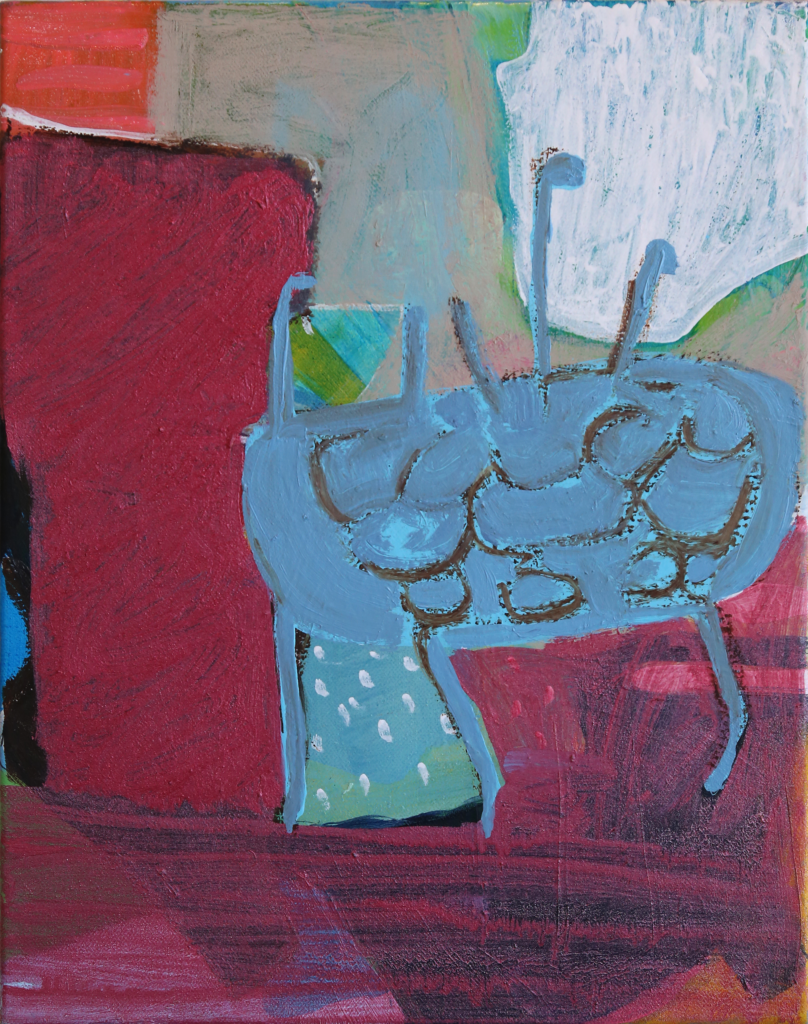 One recurring narrative about Muñiz is her on-again, off-again art education and career. At this point, she’s clearly on, clearly staying. Encouraged by certain professionals at what became the right times along the way, Muñiz returned to her first ambition, left her home and family in San Antonio, Texas, and enrolled at the Kansas City Art Institute a few years ago. She earned her bachelor of fine arts degree in 2014 and has been able to devote time to painting by landing in a series of studios — Charlotte Street’s residency program, Hoop Dog and, since February 2016, the Drugstore — well known among KC’s visual-arts infrastructure. The connections she’s made the past few years have been invaluable — and a lesson for Muñiz that the moment she’s enjoying is a complex mixture of privilege and sacrifice. Though she has strong family connections back home, she says she would feel as if she were in a vacuum if she tried to make her art there now.

“It just felt more important to stay put here and let my work grow,” she tells me, “to be surrounded by a plethora of people who are doing what they want to do.” 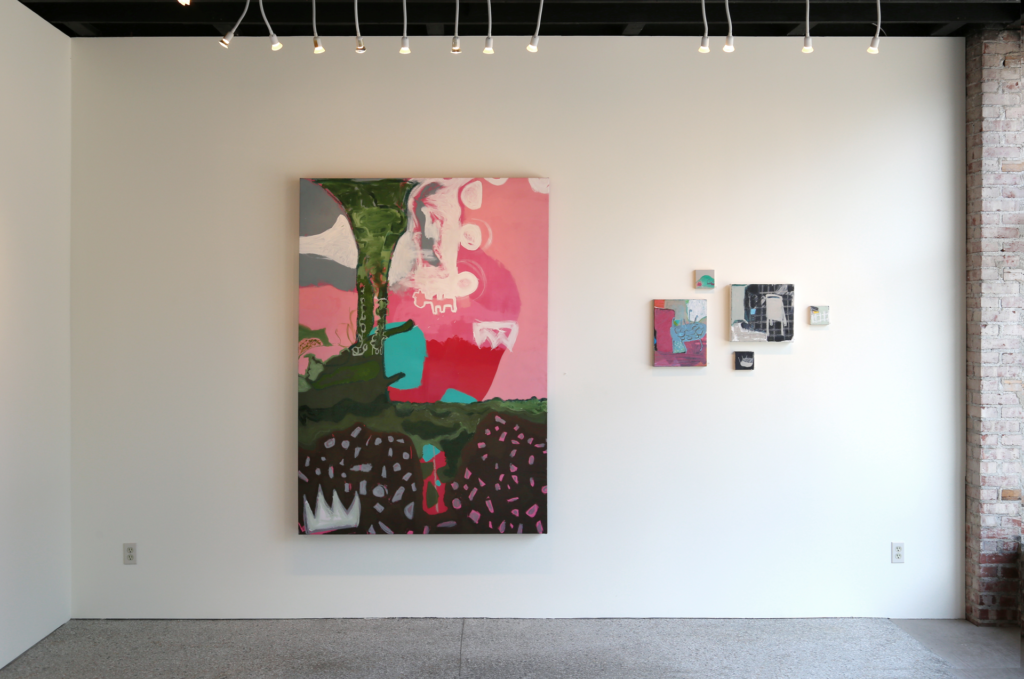 Kiosk’s Eric Dodson sees Muñiz’s paintings as representative of her straightforwardness as a person. They are accessible, he says, relatable. It’s also plain that she’s motivated and productive. She understands herself to have a role — as she puts it during our talk in her studio: “I make the work.” She makes it, and then she trusts skilled artists and curators such as the Dodsons to put it together in a way that fits a space and makes a statement.

The 15 paintings selected for My Hand/Mi Mano end up presenting a peaceful, echoing set of stories — stories that deserve pause and attention. Sit a few minutes with her iterations of the memories informing “took the ghetto with us.” Linger over “The Strength of a Brown Soul (La Fuerza del Alma Marrón).”

“If I wasn’t doing it, I couldn’t see myself being useful at all, or functional,” Muñiz says of painting. “I have to do it. It’s like breathing to me. And I’m happiest when I’m in the studio or when I’m remembering what I did — or even before I go to studio, looking at Instagram, seeing a badass painter or a stroke or a couple of lines that I like. I’m like, Damn it, let’s go.”

Through July 13 at Kiosk Gallery