At KC Rep, a ‘choreopoem’ explores the experiences of women of color 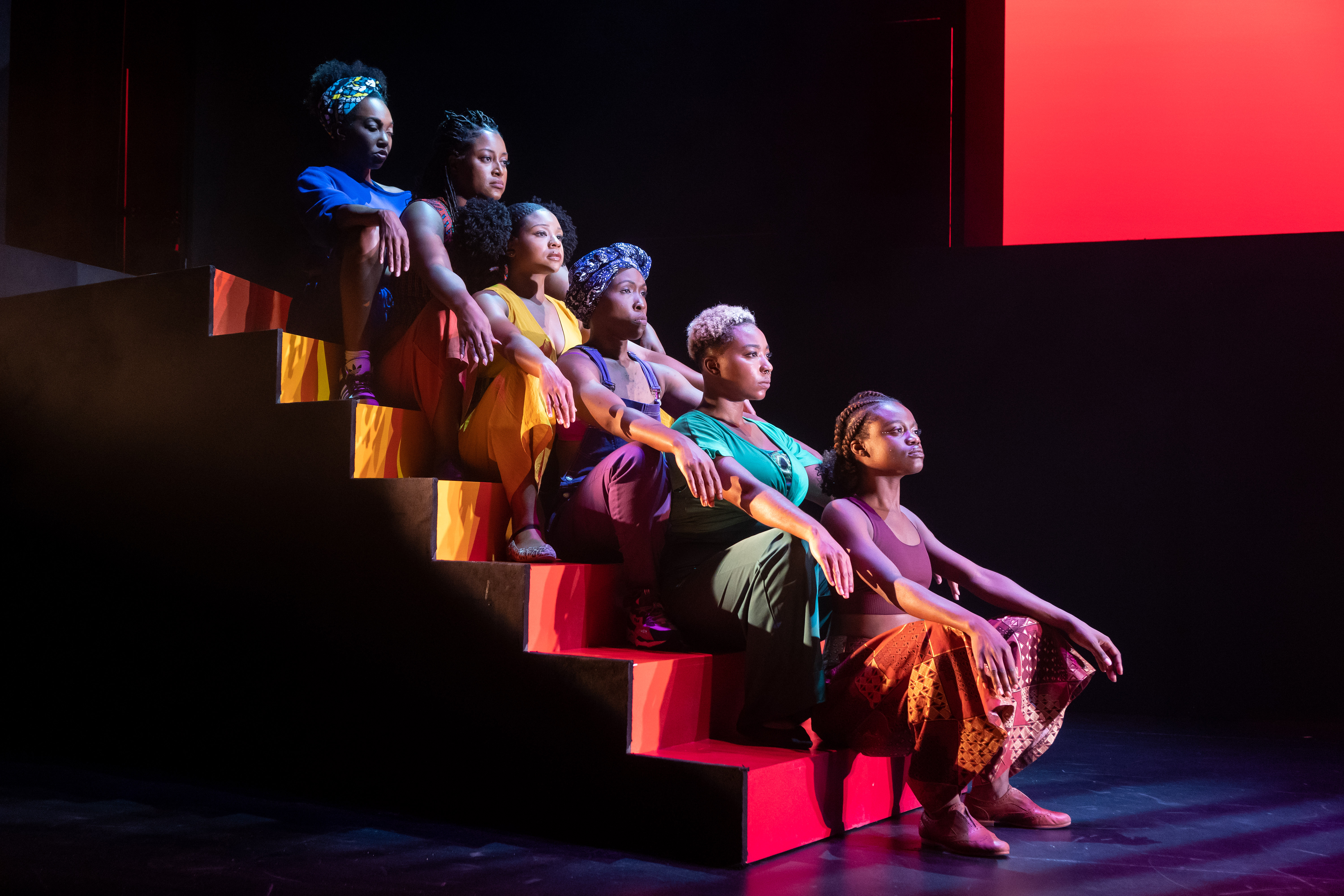 There was a time in my life when just hearing the word “choreopoem” would have summoned a Liz Lemon eyeroll from deep within my being.

That time was last week, while I was flipping through the program before Ntozake Shange’s for colored girls who have considered suicide / when the rainbow is enuf. The show, now playing on the Kansas City Repertory Theatre’s Copaken Stage, weaves dance and music through 20 different lyrical monologues about the experiences of women of color; Shange was adamant about referring to that work as “choreopoem.”

So it’s a nonlinear play, I thought to myself. Let’s not get so precious. But then a slight woman dressed in brown (Ashe Jaafaru) took the stage, moving with balletic grace through choreography that seemed less dance than halting speech.

Shange’s vision—translated expertly here by director Khanisha Foster and choreographer Brigette Dunn-Korpel—is one in which movement and words are inseparable, their marriage crucial to making meaning. Watching a seated reading of the play would be like listening to a piece of music through one earphone.

That woman in brown turned out to be the “lady in brown.” For colored girls has a seven-woman ensemble cast, each identified (in lower case) only by the color they wear. The nameless convention allows them to slip in and out of different roles as they describe wide-ranging experiences including racism, sexual assault, and intimate partner violence. 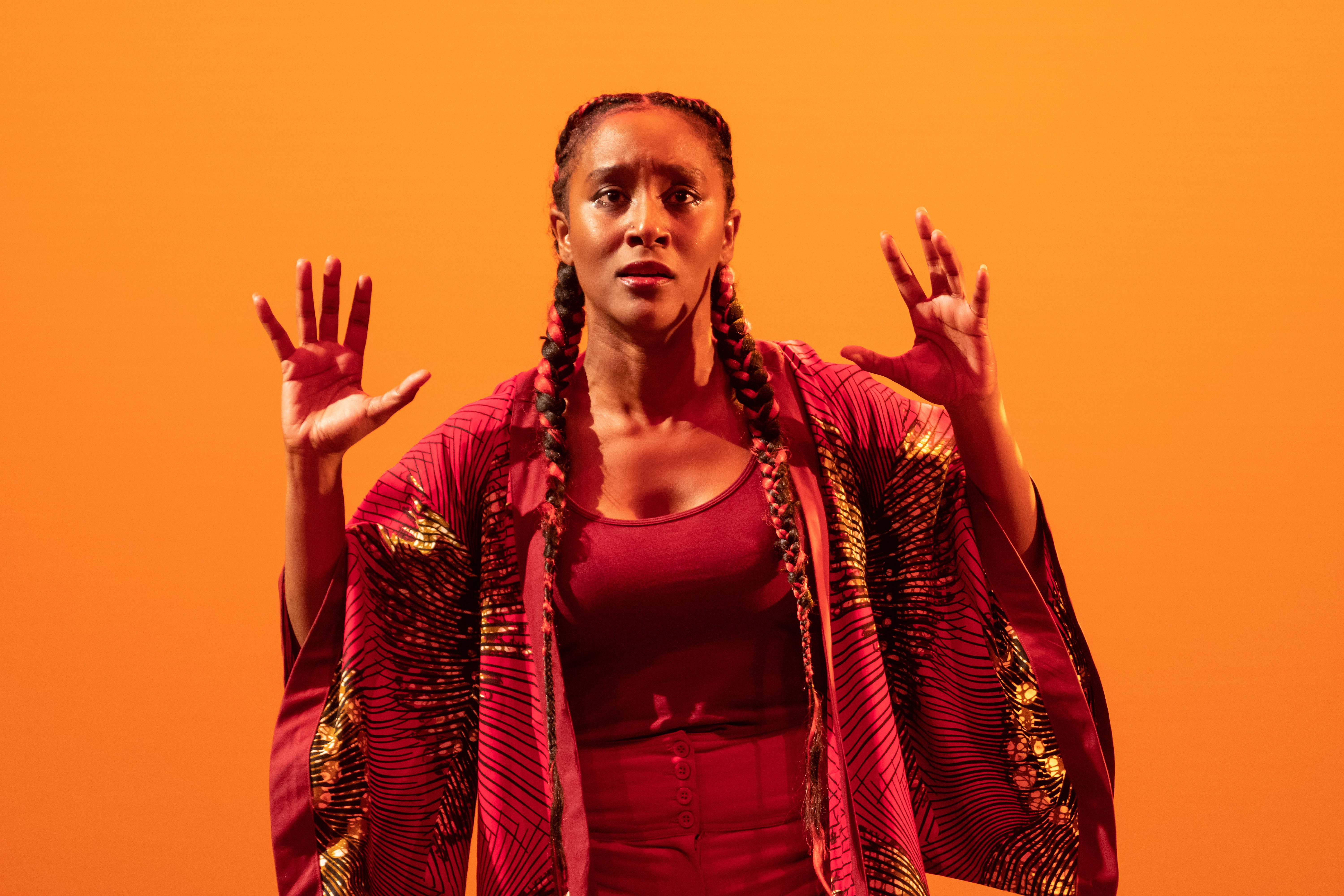 Not all of the poems are somber. A breakup poem, “no assistance,” is performed with exquisite self-possession by Celeste M. Cooper, the “lady in red”: “this note is attached to a plant / i’ve been waterin since the day i met you” she says defiantly. “you may water it / yr damn self.”

Samantha C. Jones’ costumes unite the ensemble through rainbow colors but feel tailored to the personalities of each performer. Cooper dances in high-waisted red shorts, an open robe draped across her shoulders like a prizefighter; Chioma Anyanwu (“lady in purple”) wears a liliac pair of overalls, a flannel shirt knotted casually around her waist.

Another strength is Sheryl Liu’s scenic design, which transforms a literal black box into an advent calendar of fold-out doors and pop-out staircases. Lighting designer Akin Ritchie paints those staircases with saturated rainbow colors and lets light shine through cracks in the set like a piece of scratch art. Miles Polaski’s sound design feels subtle for a show meant to marry music, poetry, and movement—but what’s here is smartly adjusted to evoke music bleeding in from the street or a nearby room. 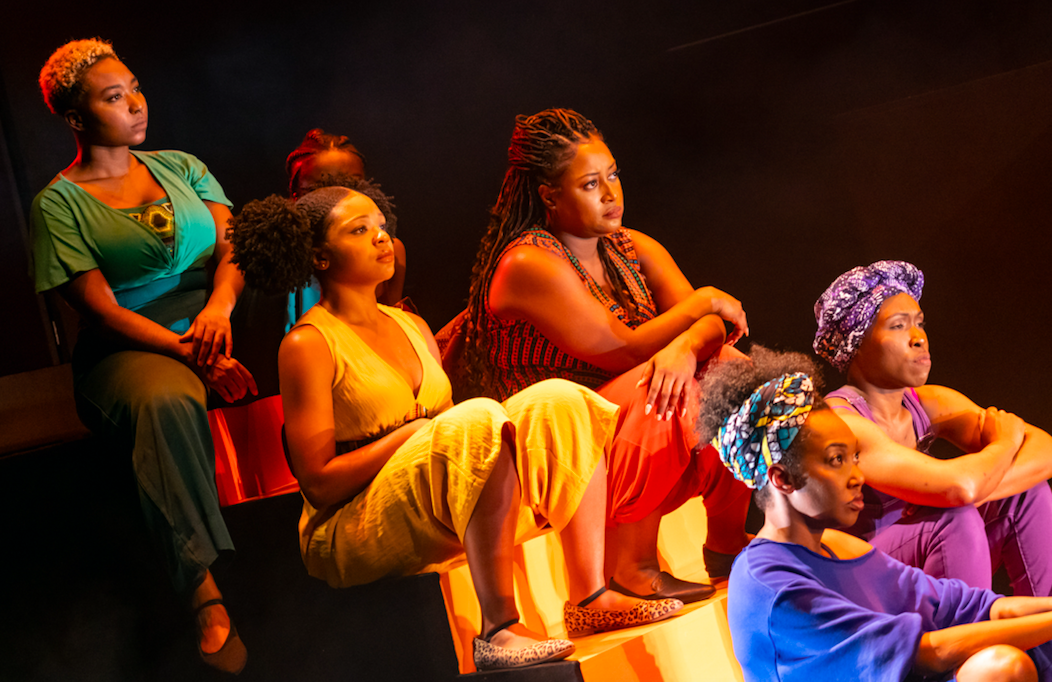 The Rep’s cast is strong, but I found it hard to look away from Anyanwu. Anyanwu is one of those performers whose skill doesn’t seem to have a ceiling: she keeps putting in the work, and she keeps getting better. Here, she gives each line or gesture arresting confidence and specificity, even when she’s just leaning casually against a wall with her hands in her pockets.

One of the challenges of dramatizing Shange’s poems is that many are flashbacks—immediacy and urgency have to emerge not through the circumstances of the past but through their effects on the performers’ present. To Foster and her cast’s credit, the show rarely drags. But the tense and climactic “a nite with beau willie brown” felt forced on opening night, as though the performer were trying to summon a particular emotion instead of allowing herself to feel whatever bubbled up.

For colored girls is ultimately a story of both survival and self-possession. The play’s final words are repeated and remixed like a chorus, each woman’s voice overlapping into a stream of sound: “i found god in myself / & i loved her / i loved her fiercely.”

The KC Rep’s cast leaves no doubt about the honesty of those lines.

Through November 10 at the Kansas City Repertory Theatre, Copaken Stage