Asheer Akram collaborates to put his heritage on moving display 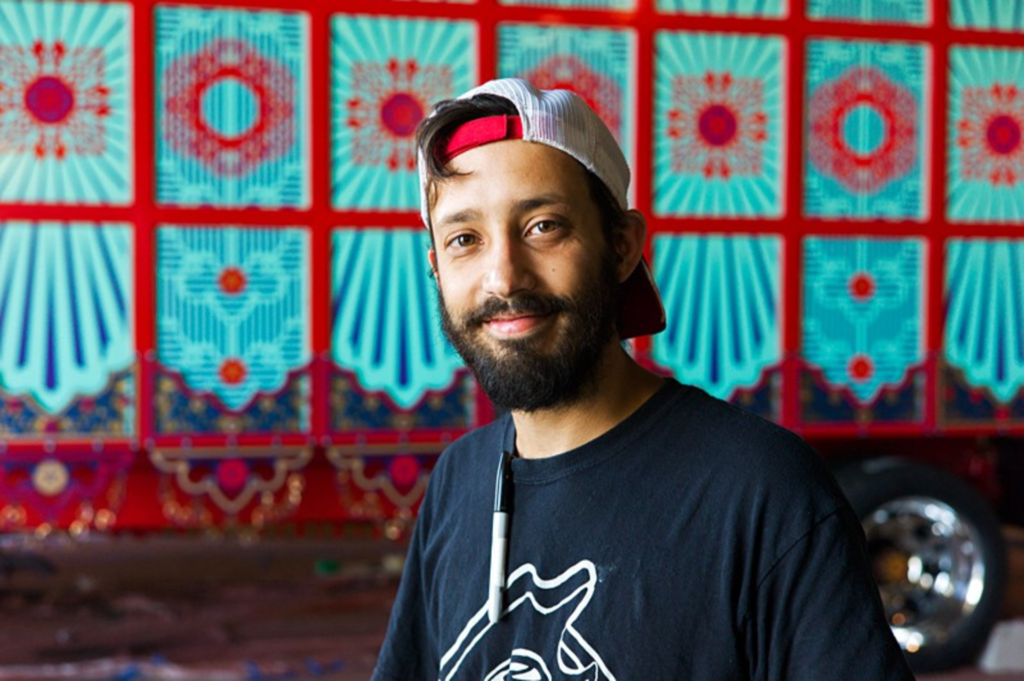 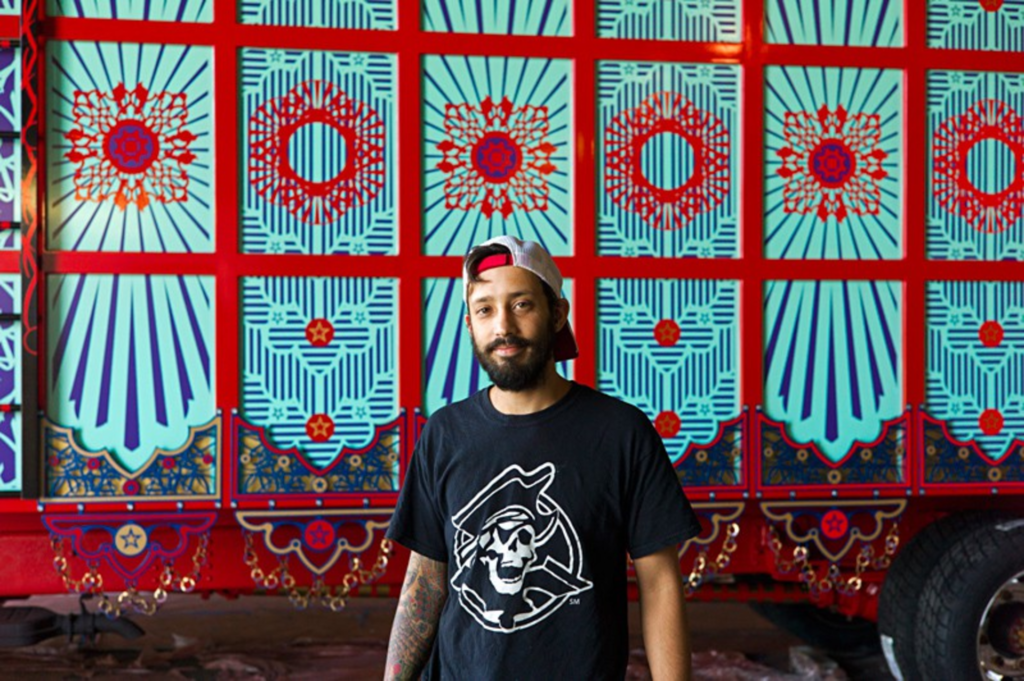 Asheer Akram has used the word “nightmare” more than once the past few minutes. He shakes his head. This project, he tells me, is “the worst idea I ever had.”

It’s late August, and I’ve met up with Akram and some of his many collaborators in a garage at 18th Street and Forest. Belger Cartage has provided this indoor space for the finishing work, which has been under way constantly for many days. (Akram has been a resident at Belger Crane Yard Studios on Tracy Avenue for a little more than two years.)

For the past four months, Akram says, completing this idea has been a full-time job for seven or eight people, working 16 hours a day. As recently as an August 11 Facebook post, a photo showed what looked almost like a blank canvas. An August 21 Facebook update put out an emergency call for a flower painter.

Building a truck, it turns out, is a lot of work. Fashioning a Pakistani-style art truck, much more so.

In this final stretch before Akram’s Pakistani Cargo Truck Initiative is due to appear as a complement to the Nelson-Atkins Museum of Art’s Echoes: Islamic Art & Contemporary Artists exhibition (which opens Saturday), he and his fellow builders are understandably fried. The number of artists and supporters involved is almost as difficult to count as the hours that have gone into the project, or the specific and highly detailed components of the work itself.

His truck isn’t just an art object, though. It’s also a mobile studio, a base for a workshop to raise cultural awareness. “That’s the point,” he says. “If their curiosity takes them to look into it [Pakistani culture] further, we can get people involved through hands-on activities.”

The front grille is an elaborately cut sculpture in itself, an example of something that can be fabricated using a teachable skill. From kindergartners to college kids, the truck visitors Akram pictures will see how things get made. The workshop includes, for instance, a custom-built print hub, made by the Print Factory (headed by Jesse McAfee and Will Burnip, who also is making four, hand-carved cedar panels for the truck), and a CNC plasma cutter — itself highly decorated by Maya Densman, Akram’s sister, an artist who lives in Texas.

Akram didn’t know much about the trucks until not so long ago. Even for him, bright, happy-looking transports didn’t necessarily come to mind first when he pictured Pakistan.

Conflict and devastation, Osama bin Laden’s raided compound, the aftermath of earthquakes and floods — these dominate the West’s ideas about this culturally and historically rich nation, the world’s sixth most populous. But push past the CNN basics, and there are those trucks, which appear to be the result of some carnival-mad dream: colorful, over-the-top conglomerations of patterned materials, spinners, carvings and countless add-ons.

Akram’s father was born in Pakistan, and when he died a few years ago, Akram and his brother (propelled by a Lighton International Artists Exchange Program) went there to connect with relatives and to study at the country’s National College of Arts, in Lahore. In a place where Americans are regarded with suspicion, and the electricity shuts down on average five times a day, Akram says he was struck by the hospitality he experienced in small villages. Strangers fed them in their homes.

And he also got a close-up look at the ubiquitous, decorated cargo trucks and buses that are uniquely Pakistani.

The tradition, he says, started with carts and moved to rickshaws, always with a simple premise: The better-looking the vehicle, the more likely someone is to hop aboard and pay for a ride.

Over there, truck owners invest thousands of dollars and employ workshops full of artisans to trick out buses and trucks. Akram has invested similarly in his endeavor, with $36,000 from 201 Kickstarter backers. There has been assistance from the Richard J. Stern Foundation for the Arts, the Westhead Family Foundation and others, adding up to about half of the truck’s ultimate $150,000 price tag.

The money has gone toward hired labor, artists’ materials, and things such as custom-made chrome wheels from Duallysportz in Los Angeles. After all, there’s no off-the-rack choice for a ’92 GMC TopKick 24-foot box truck out there.

“It’s amazing the amount of support we’ve received with just an idea,” he says. “Even from the initial get-go … people stood behind it. It’s a lot of faith.”

The idea began to take shape in February 2012, when Akram — who runs a metal-fabrication shop that produces custom work for people who want high-end fences, tables and railings — picked out a 1952 Chevrolet grain truck. All that’s left of the original frame now is the cab, and even that has been heavily modified.

“We ripped everything off the frame, put in new brakes, a new motor, new wheels,” Akram says. “We cut about 7 feet off the back of the box, ripped the box off, took the cab off, took the motor out, took this cab that we got off the other truck. We cut it in half, widened the whole thing by 2 feet, put it back together.

“Everybody that has been involved with it is doing a really good job,” he adds. “It took a long time. Kevin Fain, my employee, has been essential in doing all the mechanical stuff.”

Beyond that retooling, there’s also dizzying color now: reds and blues and metallic gold dancing in a controlled set of patterns. There are stars and stripes and arabesques. The drive shaft is painted bright-red, and the red on the sides of the truck is made of attention-getting ambulance-grade reflective vinyl. (Akram credits Jorge Calvo with painting and design assistance.) Hundreds of hand-painted links of decorative chain dangle in golden loops from sparkly, powder-coated, cut-steel “aprons” all around the vehicle’s cargo box. A painting on the back door — by Mark Galloway of Windhorse Tattooing & Gallery — depicts a Native American spin on Aesop’s fox-and-crow fable. LED lights stand ready to draw attention to the inlaid-glass “brow” on the cab (by Kathy Barnard).

The cab is still naked inside. As I talk with Akram, Jim Santilli of KC Upholstery is due to install seats, and Fain is still making adjustments to the electrical system, which has to support air conditioning, lighting, a sound system, and anything a truck normally needs to start and run.

Akram’s mother, Nancy Bounds, has come to deliver some random but essential mechanical parts. She sells real estate and teaches yoga, but she tells me that, for the past six weeks, she has been at the garage every day. “One night at midnight,” she says, “we were crawling around on the top of the truck, painting the top of the truck. All these guys are just — we’re all working like crazy. You have a deadline and you meet it.”

And now it’s here. Originally planned as a private preview, “Help Welcome the Pakistani Cargo Truck” is open to all at 7 p.m. August 29, at 45th Street and Oak (at the north side of the museum, between the Bloch and main buildings). When Echoes opens, the truck will mostly stay parked in the roundabout for at least three months.

I ask Akram which challenge has been this project’s greatest. “Everything,” he says.

“The only easy stuff is the stuff that’s done,” he says. Come Thursday, it’ll all be done. And even then, he may not say that any of it was easy.