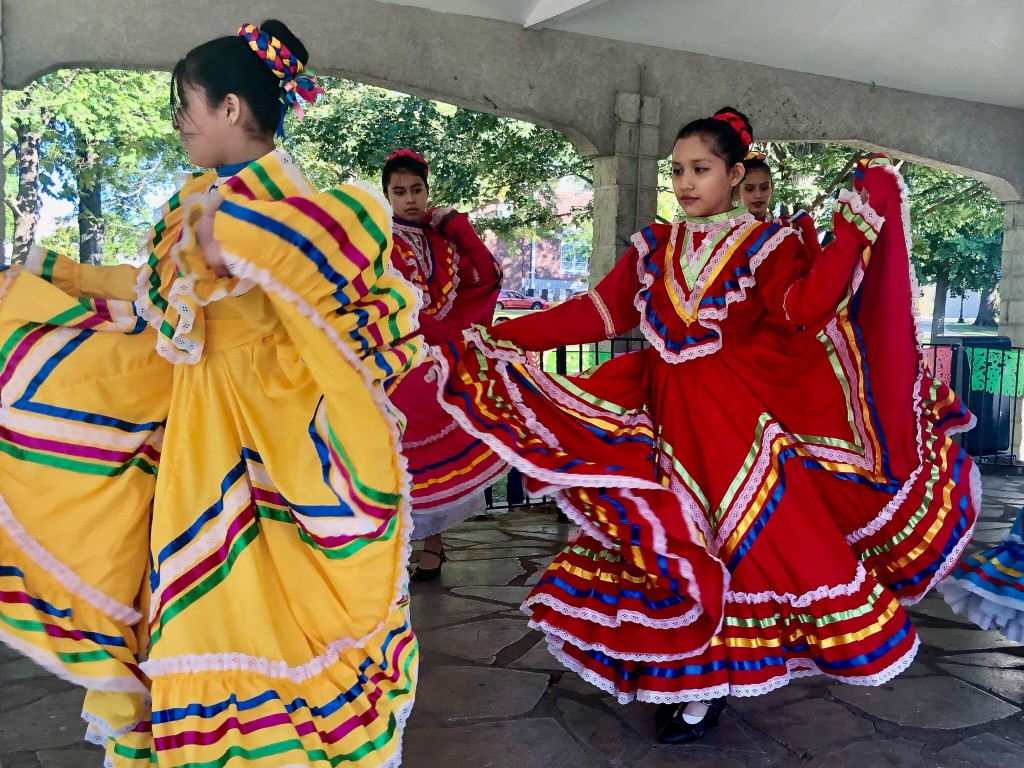 Groupo Latinoamericano Folklorico dance troupe performs at Carthage’s first Hispanic Heritage Month on September 25, 2021. In the town of 14,000 in southwest Missouri, about 30 percent of its residents are Hispanic. // Photo by Maria Sanchez

When Eduardo Crespi was working as a nurse at University of Missouri Hospital in Columbia more than 20 years ago, he’d have a full load of patients to care for.

But on top of that, he would also get called to translate for Spanish-speaking patients who weren’t his own.

“That’s how it started,” he said. “They would ask me if I could go and help.”

The hospital at the time didn’t employ paid translators — something that’s mandated now — and instead relied on other staff or even patients’ family members.

Crespi says the stories he heard from those patients deeply moved him, eventually inspiring a career change to become a paid translator, after the hospital opened an interpreters’ department in response to the advocacy of Crespi and others.

As she set out to write about Hispanic Heritage Month in Missouri, The Independent’s Rebecca Rivas was confronted with the question: Is she Hispanic? A Latina? Latinx?

She asked friends and family, and discovered differing and strong feelings about identity and the words we use to describe ourselves.

In 2000, Crespi founded the Centro Latino in Columbia, which became a hub for resources for the immigrant workers and their families now living in central Missouri.

At that same time, people across the state were seeing the effects of a large increase in Hispanics and, like Crespi, they were trying to figure out how they could help.

When the 2000 Census came out, it showed that the Hispanic population in Missouri had nearly doubled since 1990. Leading that increase was the establishment and expansion of several meat-packing plants, who aggressively recruited workers from Mexico or from towns along the U.S.-Mexico border in the mid-90s.

Schools, hospitals, fire stations in these small rural towns with factories scrambled to find translators in areas of Missouri where almost no one spoke Spanish.

So in March 2002, people from all over the state — teachers, social service workers, attorneys and researchers — came together for the first Cambio de Colores Conference to urgently address the rapid influx and map out a path to integrating those communities.

They’ve met every year since.

Sept. 15 marked the beginning of Hispanic Heritage Month, which coincides with the anniversary of independence from Spain for Latin-American countries Costa Rica, El Salvador, Guatemala, Honduras and Nicaragua.

Mexico and Chile also celebrate their independence days on Sept. 16 and Sept. 18, respectively.

Missouri’s Hispanic community has continued to grow, and discrimination is not necessarily the biggest obstacle to bridging the cultural gap in these towns, said Maria Rodriguez-Alcalá, a former county engagement specialist with the University of Missouri Extension.

Rodriguez-Alcalá, who has led several outreach projects in southwest Missouri, said there are organizations that want to offer resources like loans, health care and entrepreneurial support — but those programs require trust from the Hispanic community.

“If you build the trust first and their relationships, and they get to know what you offer, then they will be coming to you,” she said. “And that’s what we’re missing.” 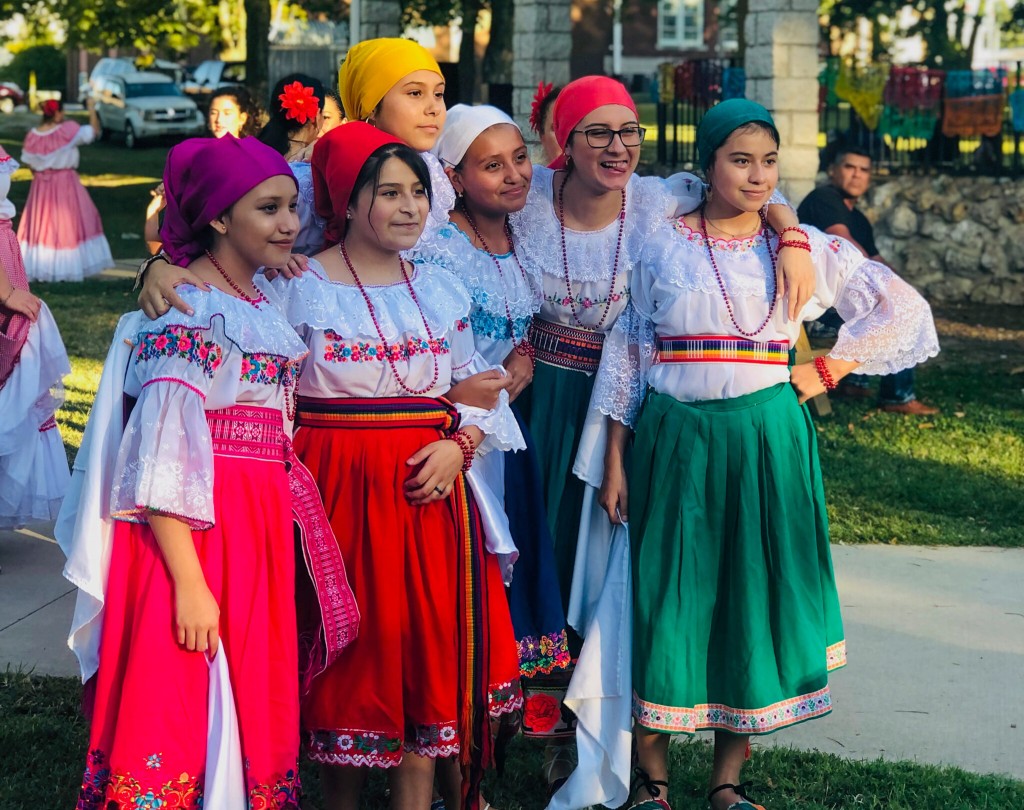 A group of dancers wearing traditional dresses from Ecuador pose for a photo during Carthage’s first Hispanic Heritage Month celebration on September 25, 2021. // Photo by Maria Sanchez

Carthage, a town of 14,000 in southwest Missouri, held its first Hispanic Heritage Month celebration ever on Saturday. About 1,000 people came throughout the day to watch the folklorico dancers twirl their traditional vibrant-colored dresses and hear the live bands play. The restaurants were showcasing food from their regions.

“Our goal is to unite the community,” said Maria Sanchez, a real estate agent who moved to Carthage from California 16 years ago.

Carthage is home to several factories that drew Hispanic workers over the past two decades, including the Butterball poultry-processing plant.

Now the town is 30 percent Hispanic — compared to less than one percent in the 1990 Census.

Bank loan officer Luis Rangel moved from Mexico with his family to Diamond, just south of Carthage, when he was 9. All his family still lives in the area. He was among the organizers for the Hispanic Heritage celebration. But Rangel and Sanchez have bigger goals than just an annual party.

They’ve established the Hispanic Connection, a group of Hispanic professionals that both Spanish-speakers and non-Spanish speakers trust and they hope to serve as a bridge between the two.

“If they see that a community leader is in this group and the information is coming from a group that they’re in, they’re more likely to be more reactive to it,” Rangel said of the Spanish-speaking community.

Rodriguez-Alcalá said this is exactly what the area needs.

Through the MU Extension, Rodriguez-Alcalá has received grants to not only conduct research, but also offer programs aimed at helping immigrants become entrepreneurs, access health care and various other things. And while there are funders who want to help, Rodriguez-Alcalá said grants often require immediate impact. They don’t factor in the time it takes to establish trust and relationships with the community, which can take decades.

“We first need to understand what the needs are,” Rodriguez-Alcalá said. “We need to get away from those strings attached that kind of put obstacles to build the network first and to build the trust.”

During this past decade, the influx has since slowed — the 2020 Census shows a 42.6 percent increase in people of Hispanic origin from 2010. And while there are still some newcomers, Rodriguez-Alcalá said the majority of Hispanics in these communities are residents or citizens who have lived here since the early 2000s.

Although the biggest populations in Missouri are in Kansas City and St. Louis, the highest percentages of Hispanics are in these small rural communities.

Milan is a small town about 100 miles north of Columbia in Sullivan County, with about 1,800 people — yet 42 percent of the population is Hispanic.

After Premium Standard Farms opened up a meat-packing plant in 1993, the number of Hispanics moving into the town exploded. (The plant is now owned by Smithfield Foods, the nation’s largest hog producer.)

Looking on a map of the 2020 Census, Sullivan County is the lone dark blue square in the middle of the state, noting the highest percentage of Hispanics — with 17 percent.

Not far behind is McDonald County in the southwestern tip with 12 percent, where Noel — a town of 2,100 people — is 41.5 percent Hispanic. Hispanics began moving to Noel in 1994 to work in a newly renovated poultry-processing plant owned by Hudson and then later sold to Tyson. Another chicken processing plant owned and operated by Simmons opened about the same time just a few miles away.

These plants caused a boom in the local job market and created a labor shortage. Yet at that time, there were few public resources available to help communities adjust to the tremendous demographic changes.

It was this challenge that essentially drove the creation of the Cambio Center, based out of the University of Missouri-Columbia in 2004. The center hosts and organizes the annual Cambio de Colores conferences.

“It was not an academic thing,” said Domingo Martínez Castilla, a retired agricultural economist who was the Cambio Center’s first director. “It was an issue with the state, which was the growth of the Latino population.”

Faculty members from many different departments met weekly to research things like immigrant integration, access to social services and disparities.

“Something that was, I believe, relatively unique in the social sciences was that all the disciplines actually contributed to the building of the data set,” Martínez said.

These last 20 years of research have taught Cambio Center leaders that change requires diverse networks of collaboration — meaning that community leaders, newcomers, institutions and organizations all need to be at the table.

And the Cambio de Colores conferences remain a key part of accomplishing that, said Corinne Valdivia, interim co-director of the Cambio Center and a professor of agriculture at University of Missouri-Columbia.

“That’s the opportunity to translate the research and knowledge that we’re developing into information that can lead to practice,” Valdivia said. “And it’s also the space where we can develop the networks of collaboration.” 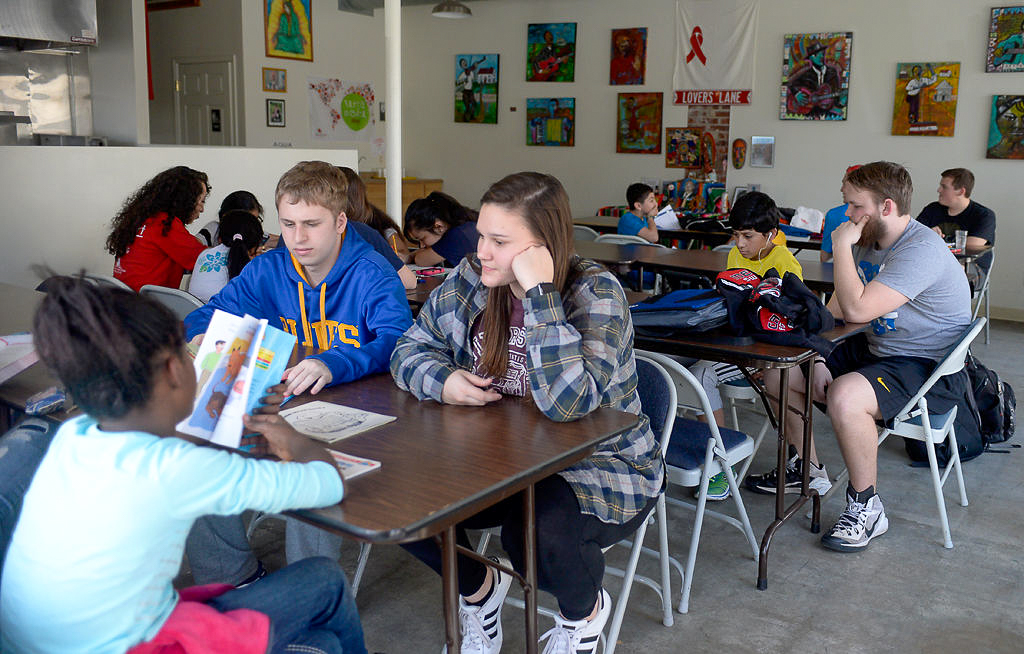 Centro Latino in Columbia, Mo. offers an after-school tutoring program, which was initiated in 2002 to address disparities in the classroom among Hispanic students. This photo was taken in April 2018. // Courtesy of the Centro Latino

While there have been some advances in serving the Hispanic community, there remains a great need to focus on educational opportunities for children, Valdivia said.

The number of Latino children in Missouri more than doubled from 2000-2015, making them the fastest growing population of children, according to the National Council of La Raza.

“Education is a key capital or asset for them to not only get by, but get ahead,” she said.

The Centro Latino in Columbia is one place that has been dedicated to this effort for two decades.

The program includes free meals and one-on-one tutoring with volunteer mentors, who are largely MU students. At the onset of the pandemic, the Centro de Salud moved its operation online.

But on Sept. 27, students were finally able to go back in person. Right now, they are welcoming students 12 and older who are vaccinated, and volunteers are also required to be vaccinated.

Next year will mark 20 years since the after-school and summer programs for children began, and Crespi is just now starting to see the lasting impact of the hard work that he and the entire team at the Centro Latino have put in since then.

“Empowering people, I think that that is the best thing that could happen,” he said “You see kids who were in the after-school program, now succeeding in college.”