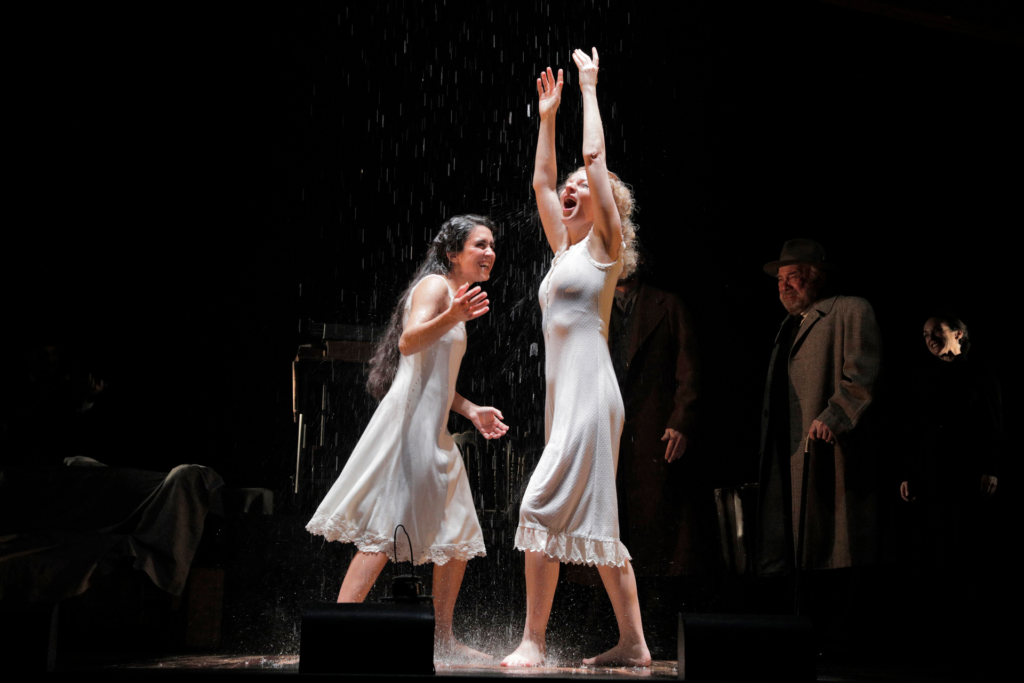 A Broadway show that could shock New York audiences — the premise might seem laughable now. But Paula Vogel’s Indecent, now playing at the Kansas City Repertory Theatre, traces the story of a play that did just that.

Indecent follows the real production (and prosecution) of God of Vengeance, a Yiddish play by writer Sholem Asch that premiered in 1907. Asch’s script found success on European stages even though it was controversial for its day — the play features a romantic kiss between two women and the desecration of the Torah by a Jewish brothel owner. But when an English translation opened on Broadway in 1923, the entire cast was jailed and charged with obscenity.

Like Vogel’s earlier play, the Pulitzer Prize-winning How I Learned to Drive, Indecent toys with chronology and metatheatrics. The play opens with a “stage manager” named Lemml (Ben Cherry) introducing himself and the cast.

“We have a story we want to tell you,” he says, brushing a fine white dust from his sleeves as though he were a piece of discarded furniture. “About a play. A play that changed my life.” 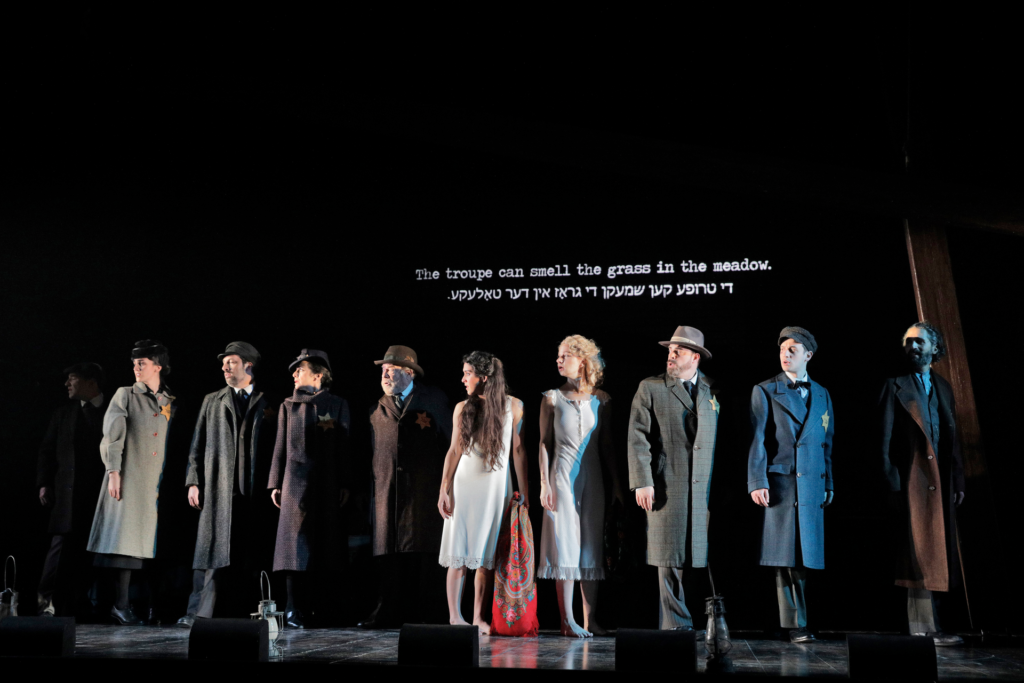 Over the course of the show, Lemml and the cast present snippets of scenes from God of Vengeance in different contexts, from its lively Berlin premiere to the ill-fated Broadway opening to a hushed recitation in a Łódź ghetto in 1943. The Rep’s production, steered by former artistic director Eric Rosen, highlights the reasons it endured. The love scene between the two women becomes an island of warmth and tenderness on an otherwise cold and cavernous stage. The resulting play — Indecent, that is — is a sprawling, decades-spanning epic that achieves moments of intimacy and poignancy inside its Brechtian frame.

That frame is literal for much of the production. Jack Magaw’s bony set design comprises simple wooden columns and beams that can be rolled across the stage or flown in and out to frame different playing areas. The few permanent set pieces are there to highlight the artifice — a rack of costumes, a row of dressing tables with warm yellow makeup lights. Projected titles (designed by Jeffrey Cady) announce changes in dates, locations, and whether characters are speaking in Yiddish or English.

Rosen directs a strong ensemble cast, but the standouts are Cherry, who plays Lemml as a starry-eyed romantic, and Susan Lynskey, who plays an assured queer actress in the Broadway debut. Ethan Watermeier also delivers a nuanced (and noteworthy) monologue as Rabbi Joseph Silverman, aided by sound designer Andre Pluess’s subtle mic effects. 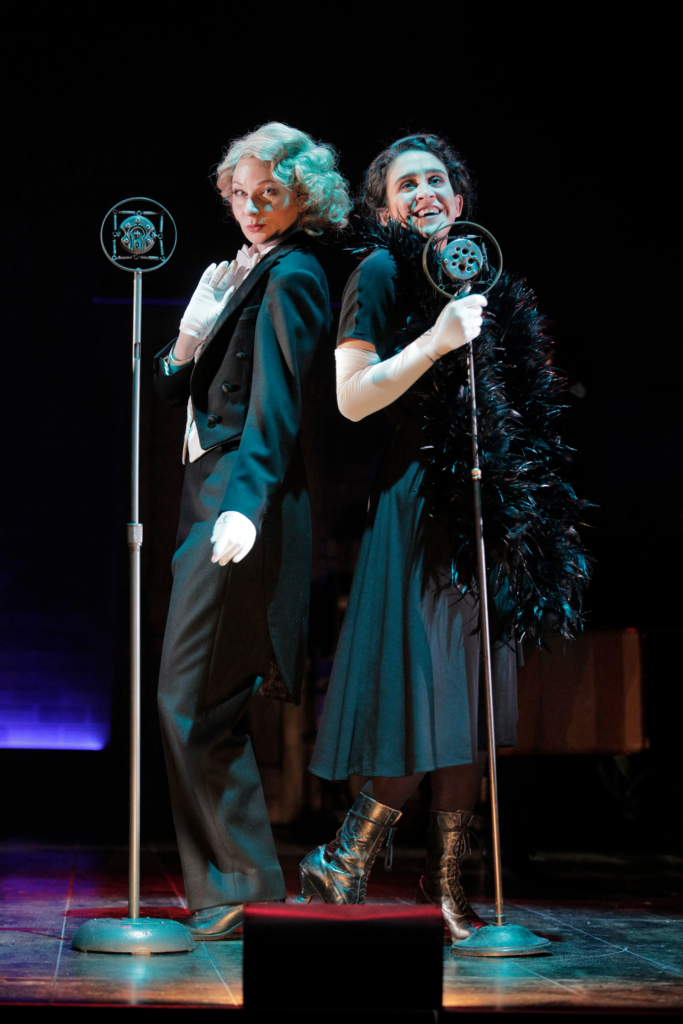 The sparse production design and flat back wall heighten the focus on Josh Epstein’s lights, which do most of the scene-setting. Angel-wing shadows stretch up toward the proscenium; a cold wash of light suffuses lovers with an almost otherworldly glow. Linda Roethke’s costumes stay true to period(s) while allowing for the numerous quick changes. Her menswear-inflected looks for Lynskey are especially evocative (and enviable).

The play runs an hour and 45 minutes without intermission and feels somewhat overstretched. A scene with playwright Eugene O’Neill serves little purpose beyond legal exposition. And while a handful of songs and dances conjure a specific time and mood, they often stall the action rather than propel it.

At the same time, Vogel breezes too quickly through more compelling plot lines. Although Asch is foregrounded in the play, his motives and desires are frustratingly opaque. Greater specificity from actor Max Wolkowitz could help, but this seems at least in part a script issue. Vogel’s sympathies appear to be with the actors, not the writers — and this is perhaps underscored by Lemml, who tells Asch, “the play belongs to the people who labor in it!”

Still, Indecent is a big swing, and it largely lives up to its ambition. Period pieces are constantly stretched at the seams by the opposing forces of nostalgia (the clothes! the cars!) and didacticism (“those who do not know history’s mistakes are doomed to repeat them”). Vogel refuses to indulge either impulse. Instead, she finds a way to entertain earnest debates about representation and artistic obligation while simultaneously acknowledging their perceived vanity in the face of unambiguous evil. The Holocaust didn’t end debates over Jewish representation. It murdered the debaters. 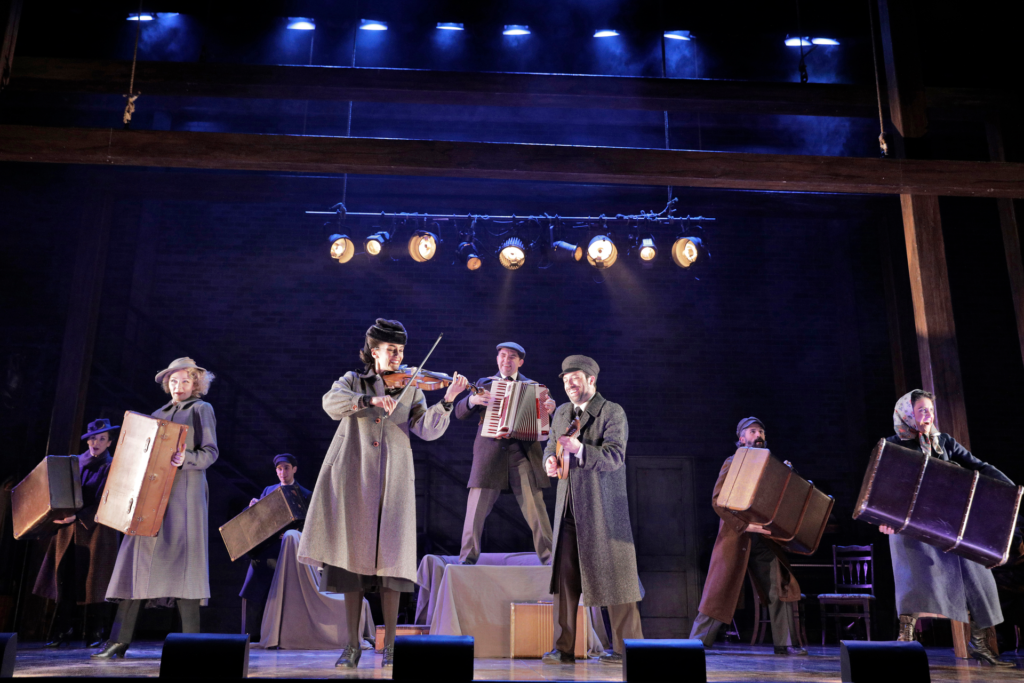 Vogel knows art can’t shake that specter. But Indecent demonstrates a way to live inside of it. Late in the play, an aging Asch is “invited” to appear before the House Un-American Activities committee the same day a Yale student arrives to ask permission to revive his play. Asch’s wife, Madje, presses him to give his blessing.

“Rome is burning, and you want to put on a play!” he shouts in frustration.

“Rome is always burning!” she replies.

Vogel’s play has more lyrical lines, but none that sting quite so sharply.