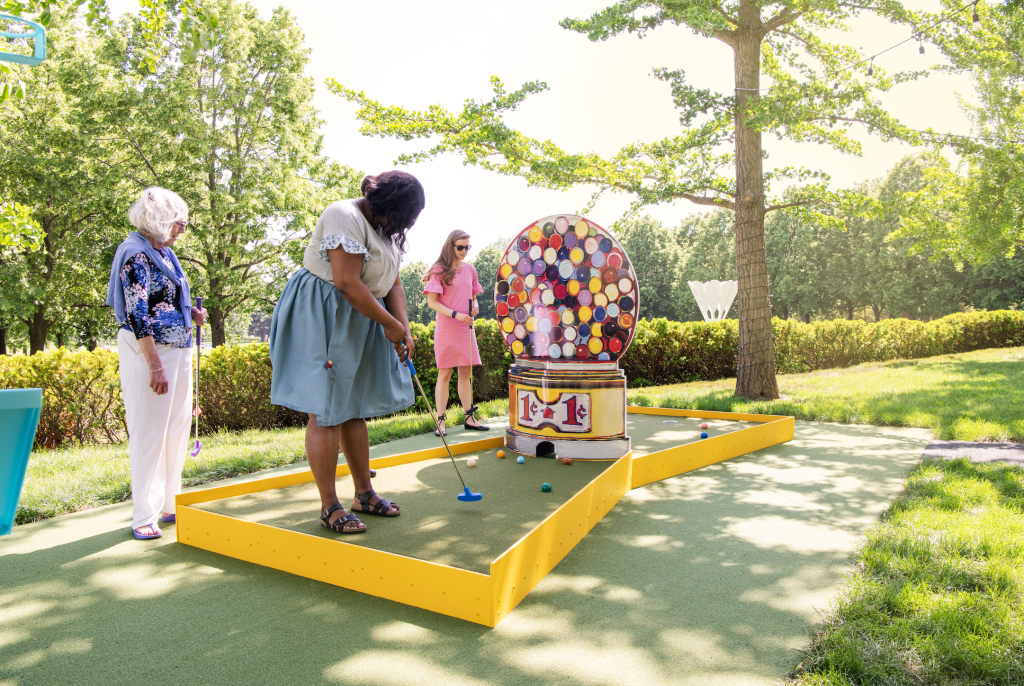 Patrons play on a hole inspired by Wayne Thiebaud (American, born 1920), Jawbreaker Machine, 1963. Oil on canvas. Gift of Mr. and Mrs. Jack Glenn through the Friends of Art. // Courtesy of the Nelson-Atkins Museum of Art

Art-inspired mini-golf sounds like such a lovely idea. Who wouldn’t want to combine the nostalgia and whimsy of a mini-golf course with the sophistication of fine art? Or to impress your out-of-town family with how quirky and cool Kansas City is?

But the Art Course at Nelson-Atkins Museum of Art, now in its third summer of operation, doesn’t offer much beyond the gimmick.

The course’s nine holes are set up in front of the museum, weaving between the terraced lines of hedges and trees. The heretofore-calm lawn and sculpture garden are now congested with groups queuing up to putt, littered with the mechanics of the operation, staff handing out clubs and signage guiding the way—and don’t get too close, because stray balls are definitely flying over the bushes.

The blissful, contemplative vibe on the front lawn has been replaced by commercialism that isn’t even justified by exuberance or connection to art. It’s all just… fine. It’s not worth the space it takes up. It is all fairly forgettable. Run-of-the-mill. No memories being made, no mind being sharpened, no insights being had. Just a solidly decent 45 minutes that probably would’ve been equally decent doing any number of other things. 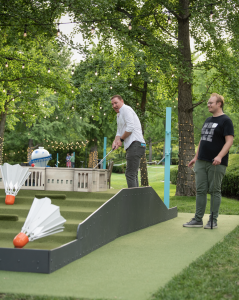 A less-than-thought-provoking hole at Art Course. // Courtesy of the Nelson-Atkins

Maybe not everything needs to be a peak experience. But when you have to book it weeks in advance and pay more than a movie theater ticket, expectations are high.

You’d think something would feel unique about playing mini-golf at an art museum, as if it might be elevated or something. It might as well be windmills and dinosaurs.

Art Course is marketed as a way to get in touch with the art at the museum while having fun. “What we were really looking for were ways to create more connections with our collection,” says Casey Claps, the Manager of Earned Revenue at the Nelson-Atkins.

Most other museums with mini-golf courses (it’s a thing) have had artists and designers submit proposals to create one-of-a-kind holes. The Nelson, however, asked people to submit hole designs that recreate artworks in the museum’s collection. “When you’re playing the course, you’re actually experiencing an artwork,” Claps says.

Arguably, no. A deconstructed/reconstructed/replicated/reimagined version of a painting or a sculpture is not the same as experiencing that artwork itself.

Rather than turning this into a thesis based on the question, “What is art?,” let’s just acknowledge that viewing impressionist Edouard Monet’s famous painting The Croquet Party in person and seeing the vivid color, and brush strokes, and detail—well, it’s a different experience than seeing the painting’s figures blown up to life-size cutouts, standing on a turfed putting green.

There’s definitely some whimsy in standing next to these impressionist figures. I could be generous and say that it was a bit like when Mary Poppins and friends jumped into Bert’s drawing, but the immersion was not complete (and no dancing penguins, so…).

Nine artworks just doesn’t feel like a sufficient number to experience any sense of connection to or understanding of the Nelson’s vast collection. The course design doesn’t even give you much insight into the works represented there—the labels by each hole are simplistic and childish.

I learned nothing about the artists or art history. At Hole 3, which is based on The Croquet Party, the sign reads: “Looks like people in the 1800s in Paris enjoyed playing games outside too. Join the fun and play nice with your new opponents.” What are people gaining when they read that? 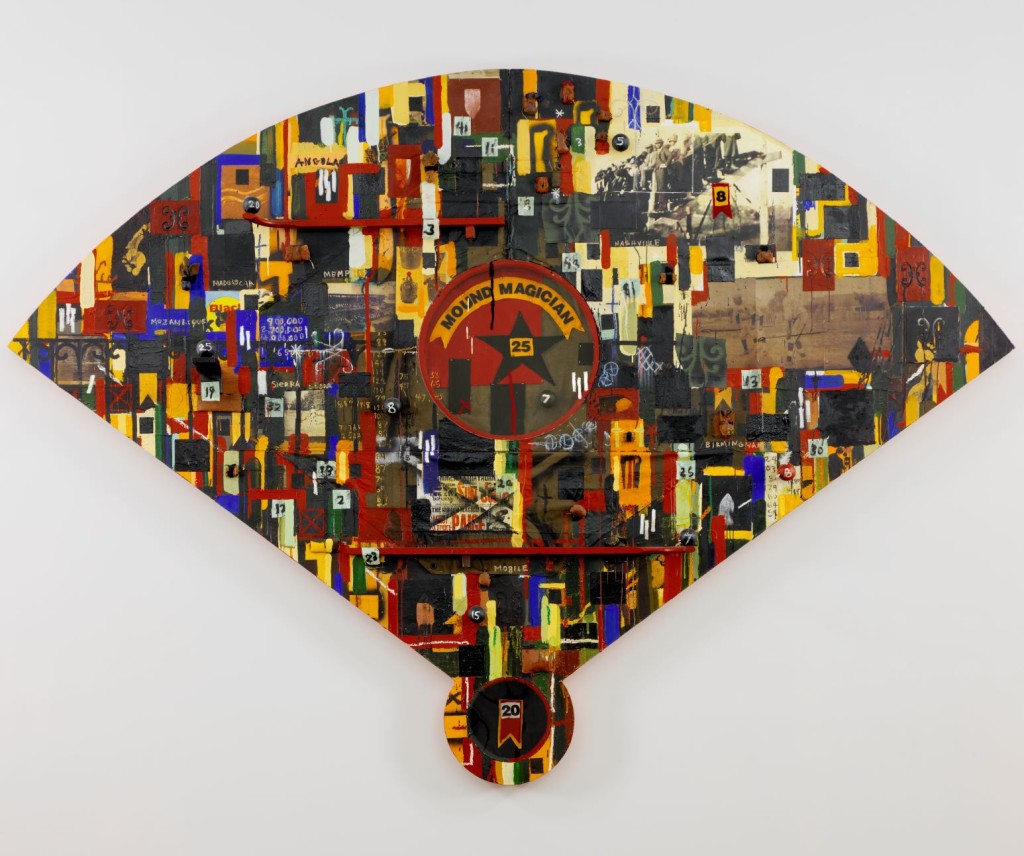 The aimlessness of the informational texts begs some questions: Just who is this for? And why does it exist?

It’s here for the museum to profit off the people who can shuck out $16 per person on a just-fine 45-minute experience. It’s not really for someone like me, who sweats about being able to make rent every month and would rather go spend an hour wandering around the museum for free.

At best, it is a gimmick. At worst, it is a commodification of and distraction from the art it purports to serve.

For a museum that locals cherish in part because of its accessibility to the public (i.e., free admission), it chafes when the new shiny stuff is behind a velvet rope.

Maybe I’m just a hater—maybe Art Course is just this cute lil fun thing that people can go enjoy for on a sunny afternoon.

People seem to like it. But Art Course is one more thing turned into a consumable experience sold to you in a tidy package, complete with a brochure prompting you to take a selfie and post it with this particular hashtag so they can keep selling the experience to others.

“We believe that art can be fun,” says Claps. For people who find art boring or pretentious, I understand that a gateway drug, or the right sort of introduction, can make all the difference in helping them see something they hadn’t seen before in a work.

But I’m skeptical that casual, fast-paced fun on the lawn with plywood replica fosters much curiosity to see more. 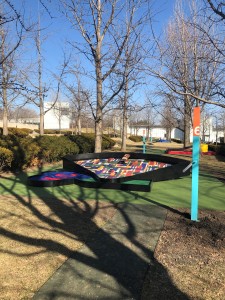 Perhaps if the Nelson-Atkins just said, “Hey, we’re doing this because we need the revenue,” I’d find it more respectable. The pretense of connecting visitors with the art inside just feels flimsy.

There’s also a strain of anti-intellectualism in the “Art can be fun, too!” argument. Art can be fun, but it also can make you think, challenge you, make you uncomfortable, inspire you, sadden you. If art is nothing but lighthearted, then it is doing nothing but upholding our inegalitarian status quo.

“Art can be fun!” has the same ring as library administrators who proclaim “Libraries are more than just books!” As if books aren’t a worthy cause on their own; as if serious art isn’t sufficient in itself.

There is a way to make knowledge, ideas, and art accessible without dumbing it down. That’s where Art Course misses the mark.

It’s not to say the Nelson isn’t a beautiful place to spend a Saturday.

“Art Course is a 45-minute experience that you might have, give or take, but we also have a concession cart that’s seasonal, and picnic tables out there, and the museum is here, so you really can spend the whole day,” says Claps. “The sculpture park is one of the most beautiful places in the city to be, so you can picnic, you can still bring your own food and hang out. It’s not just mini golf—come wander, get lost, explore. You don’t have to hurry up and go somewhere else. If you want ice cream, we’ve got it. If you want a beer, we’ve got it. If you want to come into the air conditioning and cool off and experience some of our amazing collections, do it.”

Go inside and look around the galleries. Spread a blanket on the lawn with some friends. And hey, if you’ve got a spare $16 and an hour to kill with some people you like, play some mini-golf. You won’t have a bad time. Just don’t expect it to change your life—like, say, a work of art could.