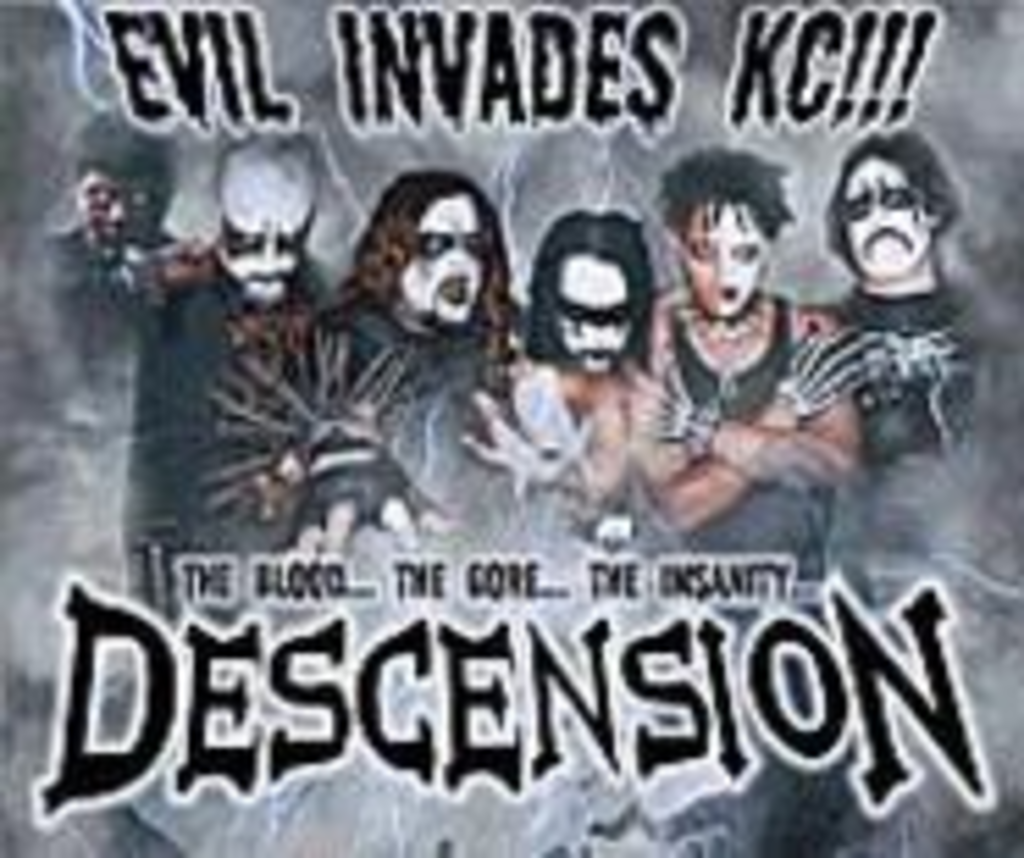 Marilyn Manson makes for an appropriate Halloween headliner — his show at the Kansas City International Raceway is sure to feature spooky costumes, blood-draining makeup, and the latest in eyeball-eliminating contact lenses. Likewise, a number of new-metal bands put some effort into creating a spectacle: Korn‘s candle-covered Gothic cathedral set at Kemper Arena was artfully done; Limp Bizkit‘s breakdancing aliens emerging from a glowing UFO made its Family Values slot bearable; and Slipknot proves that any mix of clowns and fire guarantees entertainment. Still, as over-the-top showcases by Iron Maiden and Kiss at Sandstone proved, the earlier generation of hard-rockers still puts the young ‘uns to shame. Old-school metal, though not as commercially viable as the hip-hop-inflected brand, maintains valuable traditions, and the bands that keep that flame alive should be applauded. With this in mind, here are some reasons why Kansas City’s purveyors of fine metal deserve respect:

• Appreciation of the art of self-promotion: Many new-metal groups’ bios prefer humorless accounts of auditions and chance pairings of musicians from struggling bands, peppered with aggro adjectives, such as “crushing” and “kick-ass.” Contrast such blah reading material with Kansas City black-metal act Descension‘s description of how the band welcomed a new member into its fold: “Draxon and Anshar were tired of trying to find a mortal to join the ranks, so they summoned forth the demon Astoroth from the wretched pit and with their own blood drew a contract that he would indeed join them in their unholy crusade.” Similarly, the groups’ descriptions of their music transcend anything mere music critics or record-label publicists could muster. Descension’s illustration of its bass player’s prowess is pure poetry: “Knightstorm IX brings the feeble to their knees when he crashes the thunderous strings of his mighty four-stringed battle-ax and forces Christians to sob and cower with the sheer devastation of the tone.” Note the artistry of the stage names: Draxon, Astoroth, and Knightstorm IX are all infinitely more inspiring than, say, Jonathan or Fred. (For more spooky reading, log onto Descension’s Web site: www.zombiebloodbath.com/ descension.html.)

• Theatrical performances: There’s really nothing like a genuine, makeup-smeared, stage-blood-dripping metal show, especially one that incorporates mannequins and various other props supplied by one of the city’s cult heroes. Todd Sheets (a.k.a. guitarist Astoroth), the producer/ director behind such gore-splattered fare as Zombie Bloodbath and Violent New Breed, transforms the stage into what could pass for sets in his films. On September 29, the group’s first headlining gig (at El Torreon) culminated with the crucifixion of a nun. Economy-size vats of stage blood, smoke machines, snow machines, and “anything and everything Todd can get his hands on from his movies” plays a part in Descension’s stage show, Knightstorm IX reports. Given that Sheets’ movies have featured everything from vampires to a gutted victim who was stuffed with straw and burlap and planted in a field as a human scarecrow, the horrific possibilities are endless.

• Real singing: Well, “singing” might be an inaccurate term for the lions’ roars that emerge from deep within Overture‘s Ian Andrews and Zack Kauffman, but it sure ain’t rapping (which should be of consolation to the old-school contingent that cringes at Ozzy Osbourne‘s collaborations with Busta Rhymes and the Wu-Tang Clan). However, unlike some metal vocalists who sound like Cerberus barking in code to warn Satan of an intruder, Overture’s frontmen clearly enunciate such phrases as “Skeletonize the carrion land” and “We are all squirming larvae.” Darkside‘s Steve Bentley is a singer in the traditional sense, pairing Ozzy’s anguished wail with Megadeth‘s Dave Mustaine‘s defiant snarl. However, backup vocalist Randy Hickey‘s gruff emissions sound as if they’re coming from beyond the grave. His ungodly repetition of the numbers “867-5309” during the group’s rocking cover of “Jenny” sounds as frightening as a possessed child’s redundant spewing of “666” during any Exorcist ripoff. Lawrence’s Origin features three singers, each of whom takes a vocal pitch and bends it to the dark side — the sinister soprano of an angel gone bad, the midrange eruptions of a man who sounds as if he’s belching fire as he delivers his lines, and the metallic bass of someone whose vocal chords seemingly have been encased in lead. Descension’s Anshar favors an upper-octave screech, like most of his black-metal brethren, but he’s started to experiment with foreboding lower-pitched vocals. Again, his band says it best: “His words penetrate the soul like a thousand wasps as they sting the flesh.”

• Quiet intervals: Limp Bizkit would never perform a breathtakingly beautiful, slow-paced instrumental before resuming its assault, which is probably just as well, because its fans wouldn’t understand such a break in the break-stuff program. But traditional metal fans are aesthetes who can appreciate a sparkling, mellow guitar solo, so the groups deliver, either by injecting peaceful eyes into their stormy songs or by crafting melancholy wordless compositions, such as Overture’s “Anathema.” Unlike the chord-playing upstarts in the new-school outfits, many traditional-metal guitarists are classically trained, and these moments of relative calm allow them to showcase their flawless technique.

• Long hair: Many of the members of Darkside, Overture, and Descension sport manes that cascade over their shoulders. This is especially important for the guitarists, as it’s dazzling to see them bang their heads in a spiral cycle during their frenetic solos so that their hair sweeps the floor clean. It’s also reassuring to people who remember Metallica’s heyday and the Samson-like loss of strength that accompanied the band’s switch to the close-cropped look. And as our musicians are all justifiably proud of their flowing tresses, none of them will ever be seen packing his ‘do under a stupid-looking backward red cap.

• Genuinely menacing lyrical content: Watchdog politicians are fortunate that underground metal bands soar beneath their radar — one glimpse at the gruesome subject matter in which these groups revel would send them scrambling back to safe targets such as Eminem. Observe the following passage from Overture’s “Perfect in Death”: I cut your flesh/as you have cut my soul/dissect you, open you/heart exposed, I caress/you are so perfect in death. Or Darkside’s matter-of-fact suicide instructions: Put the knife to your throat/take a slash and soon you choke. As for Origin, song titles such as “Vomit You Out” and “Lethal Manipulation (The Bonecrusher Chronicles)” speak volumes. Descension’s lyrics are primarily pro-satanism and anti-Christian, though the group has reported on the record that its members are not actually satanists and that its choice of subject matter reflects its taste in bands more than its religious preference. “The lyrics are sometimes violent and graphic, but they will not always be, as we strive to create unusual and different imagery in the lyrics while the stage show itself remains ‘violent,'” Knightstorm IX says. “Some lyrics are very obscure and have a deeper feeling. We try to avoid cliches as much as possible.” To that end, Descension completed an album (Storm from the North) that contains no songs with “death” in their titles, and its lyrics can be comprehended without the use of a medical glossary. Bonus: No real metal songwriter would be caught dead using the word “nookie.”

Descension’s next showcase takes place on November 24 at El Torreon, when it headlines an event that might be dubbed “Thanksgiving, Bloody Thanksgiving.” Turkeys beware. Overture and Anwyl round out the bludgeoning bill. Darkside joins Phantom Fear, Conspiracy, and File 13 at The Edge of Hell haunted house on Saturday, October 28.