Application Pending, though funny, could use sensitivity training 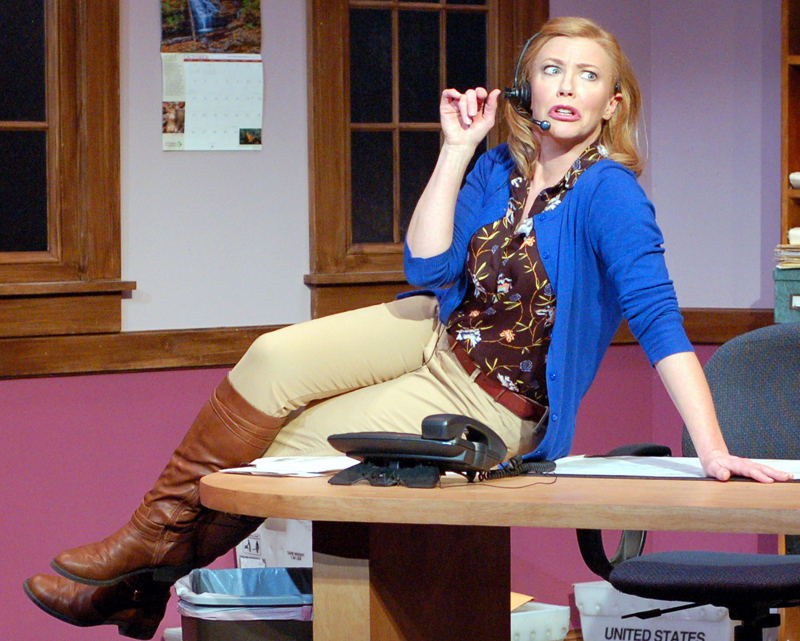 The feverish one-act follows Christine, a single mom stretched to herculean limits on her first day as director of pre-primary admissions for Edgely, a prestigious Manhattan prep school. Her predecessor (fired for cause — more specifically, causes) has left her with mountains of unprocessed applications, bags of evidence for a DEA investigation, and scads of brittle parents desperate to confirm their offsprings’ acceptance into an Ivy League elementary.

On the Unicorn Theatre’s Jerome Stage, actor Jennifer Mays plays Christine, Devin (her son), Lawrence Bradshaw (the school’s fascist headmaster) and dozens of other callers to the school’s admissions line. She is exceptional in the role, tuning herself like a radio dial into the unique frequencies of each character. Her voices are impeccable, her ability to pivot among them more so. But Mays’ most remarkable feat is keeping us in touch with Christine and her reactions to each caller, traveling a clear and coherent emotional arc.

Chalk some of the magic up to director Ian R. Crawford, who manages to block even phone calls dynamically. Much of this is achieved through subtle but specific physical detail. Slight adjustments — the slant of Mays’ body, her grip on the phone — keep the pingpong dialogue humorous instead of harried.

Packing 40-plus characters into a 75-minute show necessitates some narrative shortcuts and easy-access archetypes. So we get a barking gym coach, a Valley-girl slut and a pompous millionaire who begins every sentence with dahling (and whose lines Mays chews through with an aristocratic underbite). The greatest-hits caricatures allow the actor to roll out every accent in her arsenal — Southern, Swedish, Italian, British, New York, George Clooney — and even to perform some inspired Celine Dion hold music.

But a couple of the stereotypes are deeply uncomfortable — and not in the incisive, deliberate manner of An Octoroon, the show playing down the hall on the Levin stage.

Exhibit B: “Takala Matata,” an American Indian finance director and straw social-justice warrior for Edwards and Sandberg to dress down. Denying scholarships to white students for being “heritage-poor”? Check. Taking grievous offense at the words “reservations” and “chief” used in benign contexts? Check. Surprise Rachel Dolezal? Checked out.

The Takala and Teresa scenelets contain the least original jokes in the play, making their inclusion all the more confounding. Edwards and Sandberg have a clear grasp on quick-draw comic timing; several calls are sprinkled with moments of genuinely surprising, satisfying humor (a party supplier with too many day jobs; an unsettlingly adorned Build-a-Bear). But as the play goes on, the lighthearted humor takes an increasingly smug and mean-spirited turn. Christine, a sweet-tempered mother and aspiring educator, gradually adopts the tactics of her enemies to achieve her objectives. Ostensibly, we’re supposed to cheer. But the “just desserts” she serves feel anything but.

The production design is imaginative across the board. Gary Mosby’s detailed set gives Crawford and Mays ample room to play, even when tethered by a phone cord. Alex Perry’s lights transition subtly at key moments and bombastically at others. (A danger-zone magenta for the headmaster’s calls is appropriately ridiculous.) David Kiehl’s sounds earn as many laughs as the lines. (A low-pitched, radioactive thrumming stands out.) And stage manager Kelsey Brennan York’s timing is impeccable, helping sound and sight gags land.

Crawford, Mays and the design team have given Application Pending a staging that dazzles. But the script sabotages them with lazy sociopolitical jabs and too many punch lines that punch down.