Apparition’s Cantina takes Vignettes far, far away through May 28 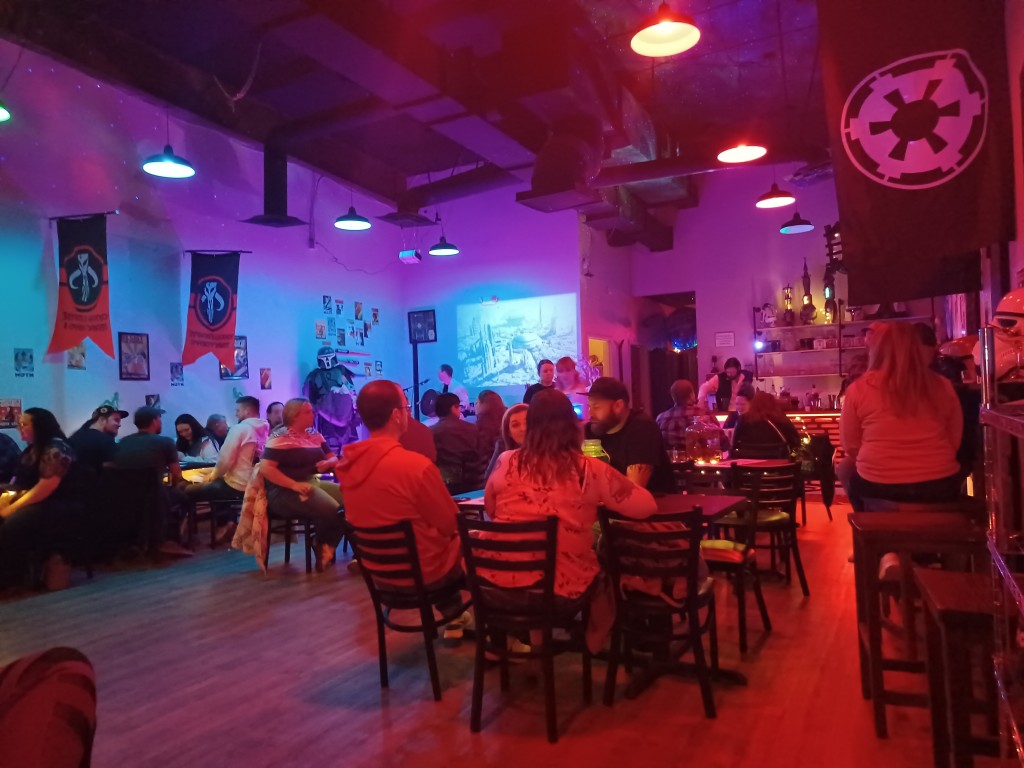 With a plastic lightsaber clipped to my belt, I arrived at the latest Vignettes pop-up venture, Apparition: Cantina, hoping for a modern Star Wars experience that wouldn’t leave me scratching my head.

Fortunately, Disney had absolutely nothing to do with this one, and the scene proved to be far from your average hive of scum and villainy. There were no disintegrations nor limbs lost that night, but I want it on the record that I did take the first shot—and several more.

I was greeted in the lobby by two life-sized stormtroopers, one a statue and the other a real person in a costume. Trippy. I immediately reached for my identification. A gonk droid and a glowing-eyed Jawa lurked in the corner as I took in the initial scene.

As has been the standard at the Vignettes pop-up bar experiences to date, artist Colleen King created the most impressive decorative centerpiece: a recreation of the iconic Han Solo carbonite slab with the face cut out for the ‘gram shots. I took several. 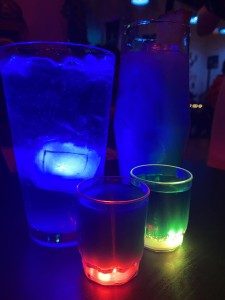 An array of galactic concoctions. // Photo by Tyler Schneider

For what I can assume can only be legal reasons, the Vignettes team absolutely did not want to serve me death sticks. For supply reasons, I also couldn’t kill any Yuenglings. With those misfortunes considered, there was no way I couldn’t start my night off with a classic “Blue Milk”—a combination of coconut rum, pineapple, and rice milk.

I downed this tasty concoction underneath the glow of spacey red lights while the mastermind of the operation, Ed Schmalz, gave me the rundown.

“We really wanted to embody spring and summer alongside Star Wars. We wanted this to feel like you could actually come and live in a galaxy far, far away for a little while,” Schmalz says.

Coming off of successful pop-up runs based on Clue, The Office, and Lord of the Rings, Schmalz and his team have continued to fire on all cylinders in their efforts to one-up themselves.

“We just keep stacking more on the process each time. We could turn out something acceptable and fine enough without getting stressed, but we just can’t stop every time we do it,” Schmalz says. “We want the next one to be cool, so we throw even more into it. Then we take any profit we make and throw it right back into making the next one even better.”

The cocktail entries from the creative minds of Scott Helling and Zach McKenzie are once again inventive and diverse in scope. Many of these colorful drink options have some sort of glow effect added to them, which adds to the Coruscant-inspired ambiance already introduced by the alternating red, blue, and green lighting panels.

The menu itself features Aurebesh lettering, which was a nice touch. So, too, was the handful of non-alcoholic options—a pair of juice mixes called “Morning On Tatooine” and “Meiloorun Juice.”

Some of my personal favorites included “The Dark Trooper,” made of sweet rye whiskey, dark amaro, bitters, and a hint of orange all chilled by a hefty Death Star ice cube; “The Child,” a melon liquor-infused vodka sour drink that comes out looking as adorable as the character it’s named after; and “The Sazerac Pit,” a monstrosity of vanilla cognac, bourbon, absinthe, and hibiscus.

I also ordered a couple of “Kyber Crystal” shots, which come in four varieties (red, blue, green, and purple) inside complimentary glowing shot glasses. Ordering all four at once on a shotski is known as “The Jedi Temple”—a nice option for groups. 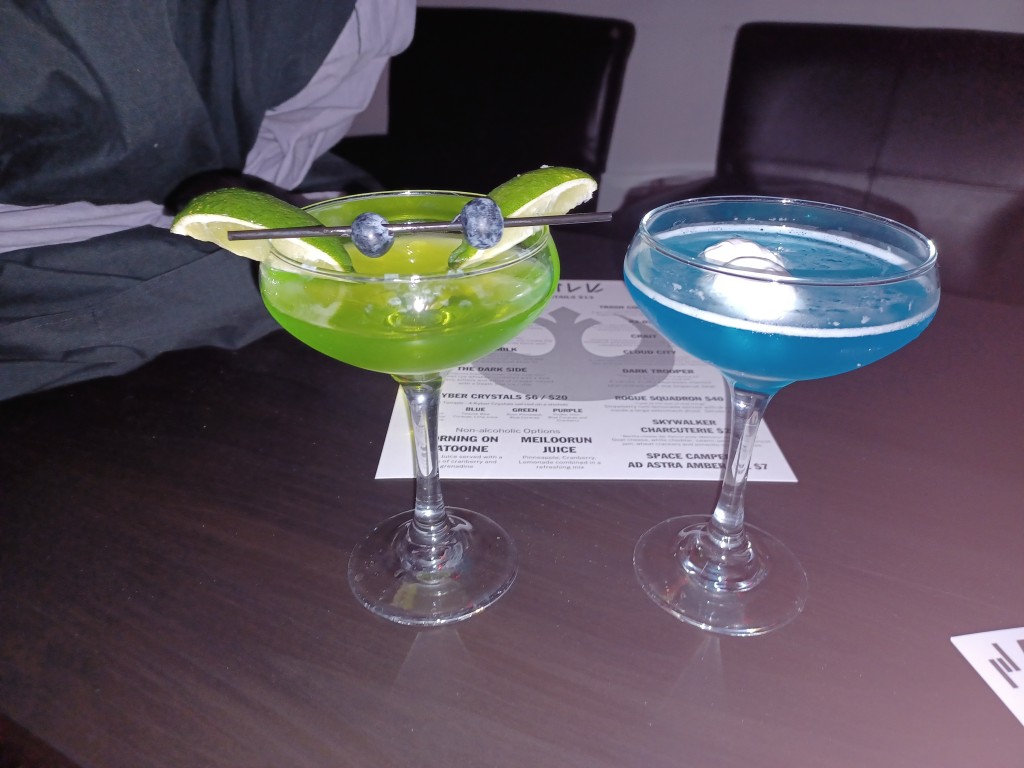 “The Child” and “Cloud City.” // Photo by Tyler Schneider

Another drink entry that can accommodate several is the “Rogue Squadron,” a strong strawberry rum lemonade served with dry ice inside a large astromech droid.

My last round included two visually appealing creations including the “Dark Trooper,” a vanilla vodka espresso martini brandished with the Imperial Seal in all its glory; and the “Cloud City,” a “cake and lemon-flavored concoction” with marshmallow clouds.

“We just can’t stop trying to make each one bigger and better than the one before it,” Schmalz says. “We want to create that immersive feeling of escaping the ordinary, that you can enter through this mundane strip mall through a fantasy portal and come somewhere magical.”

Provided you are not a droid, all of this can be taken in seven days a week starting at 6 p.m. through May 28. Trivia sessions will continue to take place on Wednesdays, with music bingo on Thursdays, live music on Fridays and Saturdays, and karaoke on Sundays.

For the latest regarding Vignettes and Apparition: Cantina, follow along here.