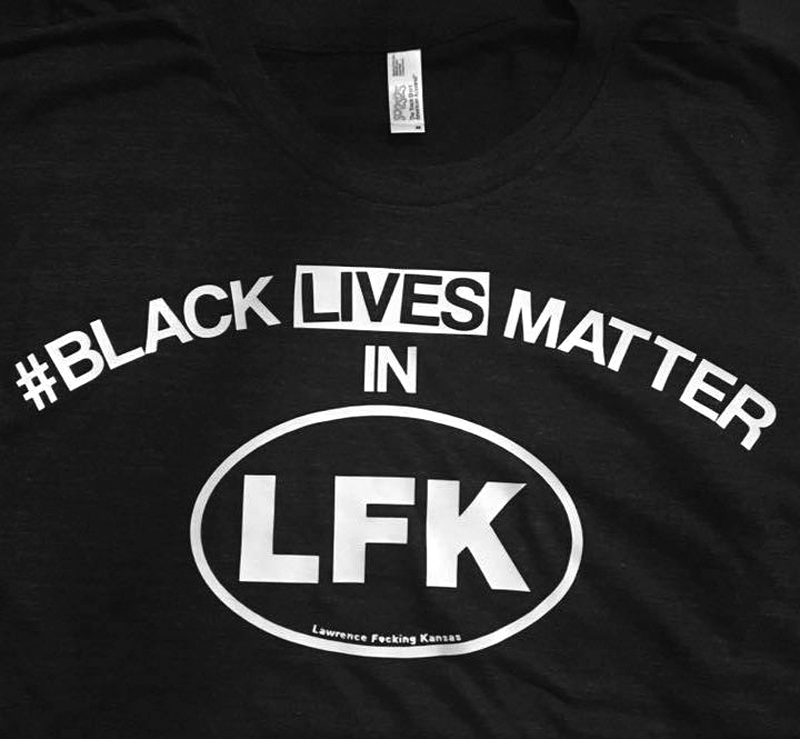 On the same day that Donald Trump nominated Ben Carson to run the Department of Housing and Urban Development, the Lawrence, Kansas, chapter of Black Lives Matter was busy planning direct action.

The group was not protesting the fact that Carson — a retired surgeon with no government experience who has said that “poverty is really more of a choice than anything else” — had been selected to run a $48 billion federal agency that oversees issues related to mortgage lending, desegregation and housing discrimination. Nor was it condemning Trump’s xenophobic rhetoric, or Kansas Gov. Sam Brownback’s economic assault on the poor of Kansas, or a Kansas police department’s use of excessive force.

What is entailed by a pledge of solidarity with BLM-LFK (as the group refers to itself online, borrowing the popular local-pride slang name Lawrence Fucking Kansas)? I sent the group an e-mail last week and heard back from a member. (He/she declined to identify himself/herself, writing, “We are one voice.”) The response:

“We invited any local business that wanted to pledge their solidarity to our cause of unconditional intersectional liberation to do so. It was not a threat or a demand or a coercion that people pledge allegiance to BLM LFK. It was literally a call to action. The businesses that initially jumped on board were enthusiastic and excited about joining a shared struggle for LGBTQIA / POC / Trans / indigenous justice, and acknowledging the absolute necessity of dismantling systems of oppression.”

Got that? There’s more:

“The businesses that declined to join this initiative through a letter of solidarity did so for a variety of reasons, most of them rooted in white supremacy or bigotry toward one or more of the aforementioned groups.”

I had a hunch that the proprietor of, say, the black-owned Watson’s Barber Shop — one of the businesses on BLM-LFK’s blacklist — might not actually be a white supremacist, so I called around Lawrence to check in with some businesses facing the boycott. (The group is keeping a running tally of who’s naughty and nice on its Facebook page.) Few of those who have declined to sign the pledge were eager to discuss the issue on the record.

“We’ve got nothing to add,” said Amy Savoie, general manager of Wheatfields.

“It’s [BLM-LFK] not something I’m comfortable speaking about at this point,” said Chuck Magerl, owner of Free State Brewery. “I’m still learning, and may have greater understanding as time goes on.”

The three locations of Z’s Divine Espresso are also non grata with BLM-LFK. Sherry Bowden, who owns the stores, said she has tried twice to contact the group to discuss the pledge, to no avail.

“My wish would be that I could communicate with somebody [at BLM-LFK] about it, in a responsible way,” Bowden told me.

Several of the businesses I contacted told me privately that they felt bullied by BLM-LFK’s pledge demands. Others were mystified by the group’s language: What does “indigenous folkx” mean? What is intersectionality?

I’m a millennial and a journalist, and I can barely explain how they might interpret those words. I’m also onboard with pretty much everything Black Lives Matter represents — rejecting systems of oppression, racism and violence toward marginalized groups; loudly protesting police killings of innocent black people — but if I were a Lawrence shop owner, I’m not sure how I’d respond to this group.

In August, BLM-LFK disrupted a meeting in Topeka between local police and religious leaders. The gathering, held inside a black church and organized by a black pastor, was intended to be a community conversation about improving race relations in Topeka. When the city’s police chief began to speak, members of BLM-LFK stood up and started shouting and cursing. The event devolved into chaos and was cut short. A fight broke out in the parking lot.

“It was like there were two completely different agendas going on,” a woman present at the meeting told The Topeka Capital-Journal. “One that wanted to hear what the leaders had to say, and then you had this other group that had their own agenda to just be disruptive.”

In September, about 20 BLM-LFK members crashed a Lawrence City Council meeting, derailing it for an hour until the council passed a meaningless resolution declaring its solidarity with Black Lives Matter and the American Indians protesting the Dakota Access Pipeline. A photo of the meeting, captured by The Lawrence Journal-World, depicts about 12 white, millennial-looking persons, and one young African-American man, all seated on the floor of the council chambers in front of the commissioners.

On Monday night, BLM-LFK members barged into a Lawrence school board meeting and began screaming and cursing in the board members’ faces. “When asked to calm down, protesters refused, saying they, not the board, were in charge of the meeting,” the Journal-World reported on Tuesday. (You can watch the video here.)

Douglas County, where Lawrence sits, is the only liberal-blue oasis in the raging red desert of Kansas. It was one of two counties that went for Hillary Clinton over Donald Trump (the other was Wyandotte) in the recent presidential race, and did so convincingly, handing Clinton more than twice as many votes as Trump. During the Democratic primaries, Bernie Sanders won 81 percent of the caucus vote in Lawrence.

Of course, a generally liberal populace doesn’t mean that an area is without racial problems. Kansas City reliably votes blue, and racial inequality is as much a thread of the city’s history as barbecue and jazz. But history also shows that there are better ways of advancing progressive causes than threatening to boycott apolitical dentists you perceive to be insufficiently supportive of your ideals. One can almost hear the real villains — Koch-style conservatives slicing down social safety nets, actual racists — laughing in the distance at every petty internecine squabble among liberals like those presumably behind BLM-LFK.

I put this question to the “we are one voice” BLM-LFK representative.

“This town is filled with keyboard activists and performative liberals,” came the answer. “People want to feel the warm embrace of Lawrence’s progressive identity — an identity they are forming largely based on events that happened over 100 years ago — but they are not willing to acknowledge their part in silencing the marginalized in our community today. A lot has happened since the 1860s, and Lawrence has not kept up with its progressive reputation.”

Originally, BLM-LFK intended for its actions to coincide with the Injustice Boycott, a national campaign involving divestment in three American cities (Standing Rock, New York, San Francisco) and a targeted national boycott of large corporations headquartered in those cities that have purportedly supported injustices there.

On December 5, the day the Injustice Boycott launched, BLM-LFK announced that it was stretching its participation deadline by two weeks, to December 19. “We want to extend an olive branch to our local community,” BLM-LFK’s organizers wrote.

How magnanimous. If BLM-LFK actually cared about its local community, though, it wouldn’t be harassing small business owners in the first place.