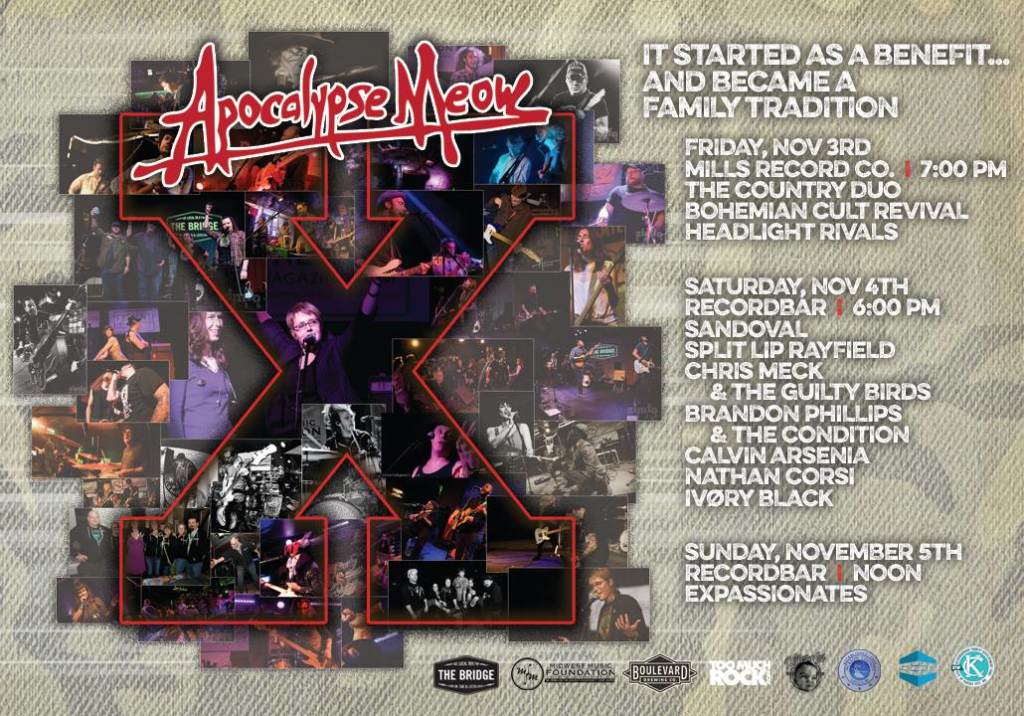 Back in 2008, the first Apocalypse Meow raised funds for musician Abigail Henderson’s treatment, after she was diagnosed with Stage 3 inflammatory breast cancer. The event fetched nearly $20,000; in the spirit of giving back to the community, Henderson started the Midwest Music Foundation to, as she said at the time, “provide musicians with healthcare assistance.”

Henderson died in 2013, but the Midwest Music Foundation continues, as does the benefit that started it all: Apocalypse Meow X takes place this weekend. I spoke with members of the MMF board, as well as affected musicians, to update the organization’s story.

Brandon Phillips is the frontman for the Architects and Brandon Phillips & the Condition. Because he suffers from both Crohn’s disease and colitis, his medical care has been a longtime medical stressor. His story is that of a working musician balancing his craft against constant worry. 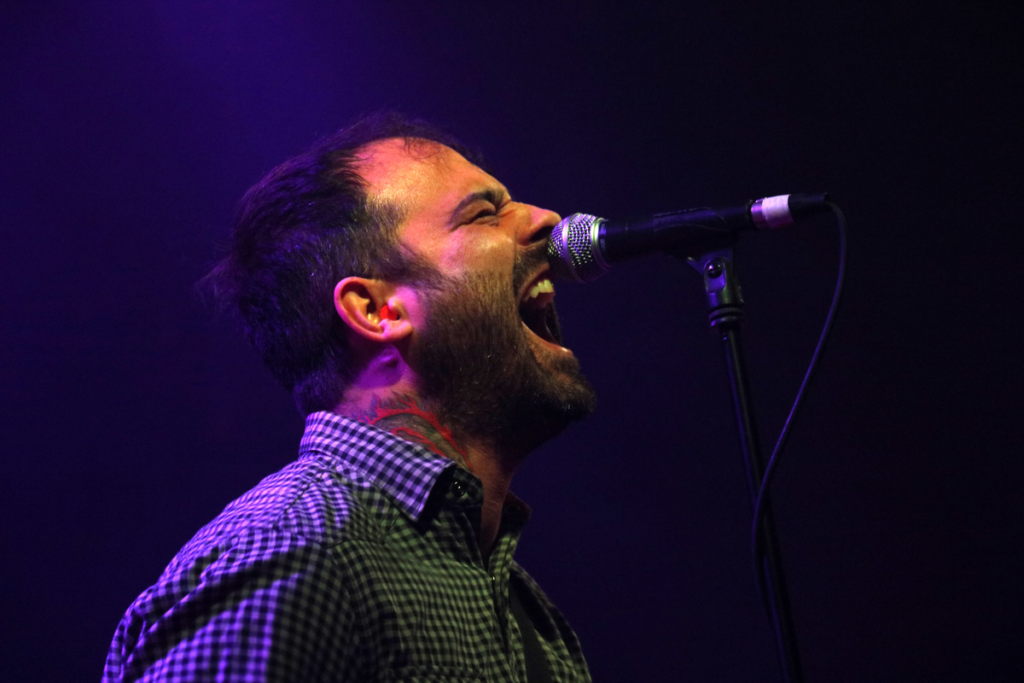 The Pitch: When did you first become acquainted with MMF?

Brandon Phillips: Abigail Henderson and Amy Farrand set up a tent and a folding table at a show at Crossroads many years ago. They had clipboards and were signing people up to be part of a new organization that would advocate for health care for musicians. I signed up and we talked about the Musician’s Clinics in New Orleans and Austin.

How exactly has MMF benefited you?

Broadly, MMF has been a lifeline for me, my family and several of my friends in times of great need and crushing costs. Specifically, I have received healthcare grants from MMF twice. My Crohn’s disease and colitis are severe enough that I require hospitalization a few times a year and am perpetually carrying one five-figure balance due or another. MMF cannot swoop in and cover my many outstanding tabs at the hospital, but they have been able to pay enough at once that the hospital finance office can forgive large portions of my overall.

I’m somewhat familiar with a little of your story, but — if it’s not too personal — what’s your story of how you came to need assistance, in terms of healthcare?

I’ve had Crohn’s and colitis since before I can remember what it was like to not have them. For my late teens and early adulthood, I bought health insurance through a pool for self-employed people, since I was a working musician. This was before the ACA, and there were far fewer regulations on insurers,  so when I needed a portion of my small intestine removed, they nuked my policy and stuck me with a tab in excess of $100,000 for the surgery.

Free markets make free people so, I was way-the-fuck too inundated with freedom to seek coverage again until the ACA — which meant a 12- to 13-year span of uncovered ER visits and hospital admissions and bills and collection agencies and humiliating repeat trips to the hospital finance office to beg for my life. In the last two years, family issues running concurrent with a job change have caused me to lose coverage twice — both times,  conveniently, right when I was sliding into bouts of sickness. In both of those cases, I went to MMF for whatever hand up they could provide.

Where has your musical performance been affected by medical issues?

Our old band, the Gadjits, was sidelined from the only two European tour opportunities we ever had because of my having been too sick. The Architects have diverted tour routings numerous times to find me an emergency room, missed shows, delayed recording schedules and payed practice-space rent for months when I was barely able to be present like I should. The Crohn’s and Colitis Foundation of America should hire my brother Adam for speaking tours based on the number of times he has explained Crohn’s and colitis to half-drunk concert promoters, venue reps and tour managers.

Both our new bands, Brandon Phillips & the Condition and Other Americans, have already seen production schedules get pushed and rehearsals canceled on account of my being in the hospital. The Architects slept through a blizzard in the parking lot of a hospital in Janesville, Wisconsin, while I was inside getting shot up with painkillers and steroids for the Crohn’s episode that had started 12 hours earlier, before a show in Chicago. Two days before that, we’d driven all night to get me home for an emergency appointment between shows to deal with the full-body arthritis that had set in as a side effect of my then-experimental medication.

How do you feel MMF helps the musical community of Kansas City?

MMF has a loud voice and long arms. They can encircle a lot with their embrace and tell a lot of people about it, so it’s good to be part of that hug and party to that voice. More important, though, they have been working at this for 10 years — which is long enough to be a known quantity, with respect to advocacy. They have undertaken the unsexy heavy lifting for so long now that their bona fides are platinum. They are taken seriously for having done serious work.

Given the current healthcare climate in the country, does MMF seem to have even more relevance now than when it started?

It’s not that it’s more relevant now — it’s that the tone and timbre have changed. I was no more egregiously fucked by the healthcare system when I signed Abby’s clipboard 10 years ago than I am now. What is different is that, 10 years ago, we had no hope of a national conversation about health care, much less a national movement. There was not yet an Obama or a Sanders within striking distance of the goal.

We were doing what we knew we could do, which was start a local confab that could provide some level of resources and advocacy for the people in our line of work. The Koch brothers weren’t going to bother over small groups of artists essentially having bake sales and rent parties to pay for someone’s neck brace and someone else’s rehab. Now that Obamacare has happened and become the symbol for conservatives to target and let slip the dogs of their resentment; and now that resentment has taken the form of Trump and his movement, the tone has changed.

There is a petty, vindictive desperation that is so high-pitched it will tell itself any lie it can construct to delegitimize the idea that everyone has right to health care. So essentially, 10 years ago it was, “No one has our backs. Let’s have each other’s backs,” and now it’s, “They’re coming for us. Fuck them.”

These are my politics and in no way reflect the mission of the MMF or Abby’s Fund.

What’s the appeal of playing benefit shows in general, as well as one for an organization which has helped you directly?

Honestly, most benefit-show organizers need to be watched carefully. That said, if MMF bought out Moe Green’s share of the casino, I’d sign a contract to appear five times a year. Anything for my godfather, my people.

Apocalypse Meow X takes place Friday, November 3, at Mills Record Company for a free, all-ages show with The Country Duo, Headlight Rivals and Bohemian Cult Revival, and emceed by KCUR’s Michael Byars. It continues on Saturday, November 4, at the Record Bar, with Split Lip Rayfield, a reunion set from Sandoval, Chris Meck & the Guilty Birds, Brandon Phillips & the Condition, Calvin Arsenia, Nathan Corsi and IVØRY BLACK, and emceed by Mark Manning of KKFI 90.1 FM and Jason Nivens of 98.9 The Rock. Details on both shows here.

To become a sustaining member of the Midwest Music Foundation, more information can be found here.