Apex Predators: KC Pioneers are an esports force to be reckoned with 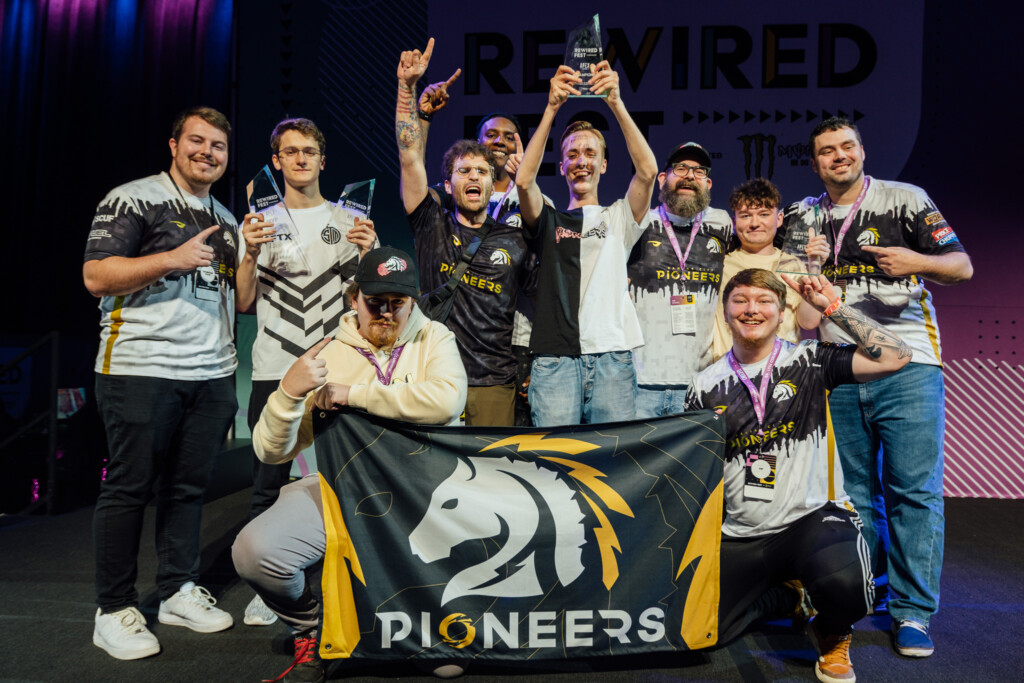 Rocket League is the only video game where remote-controlled cars and trucks play 3-on-3 soccer with a giant ball. For eight years, the title has remained one of the most popular and competitive esports worldwide, with roughly 90 million players logging in each month in 2022.

One of the better teams in the current professional scene is undoubtedly the Kansas City Pioneers, who, despite their name, are actually a trio of Australian players and recently one of just 16 international squads to have qualified for the Rocket League Championship Series’ Fall Major, held in Rotterdam, Netherlands from Dec. 8-11.

The multifaceted Pioneers brand, also a recently acquired Apex Legends roster, looks to be highly competitive—if not one of the best—in Europe at a vastly popular hero shooter game with over 100 million players. The Pioneers also have representation in the first-person shooter, Splitgate, owning a team of which two players live in Germany and the other two in the U.S.

It’s bizarre, but certainly not unheard of, for an esports franchise to invest in outfits based overseas. In this new era of connectivity, it would almost be hindering not to break from the traditional molds of centralized, location-specific entertainment. Far fewer choose to name their brand after a specific city, however, as the Pioneers’ main ownership group of five Kansas City-based co-founders chose to do three years ago.

“We recognized that there wasn’t much going on organizationally in Kansas City and the Midwest in general [with esports] and saw so much potential for streaming, technological advancement, and huge opportunities to drive revenues for our city with partnerships. As business owners, we immediately recognized the opportunity at hand,” co-owner Sam Kulikov says.

This summer, Mayor Quinton Lucas—who has done charity Among Us streams with the team in the past—proclaimed July 21 as the city’s official “Pioneers Day.” Three current Chiefs players—wide receiver Mecole Hardman, offensive lineman Trey Smith, and offensive tackle Andrew Wylie—have also come on board to serve as brand ambassadors and content creators.

“We want to build the next sports franchise. We want to be recognized just like the KC Current, the Chiefs, and Royals,” co-founder Jeremy Terman says. “We want that same type of stuff, and we’ve made phenomenal traction so far.”

In addition, the Pioneers have sponsored former Madden 17 champion and Kansas City native Matt Clark, who goes by BeastModeMac, for several years. In the past, they have fielded competitive outfits for titles like Valorant, Halo Infinite, Call of Duty, and Gears of War. 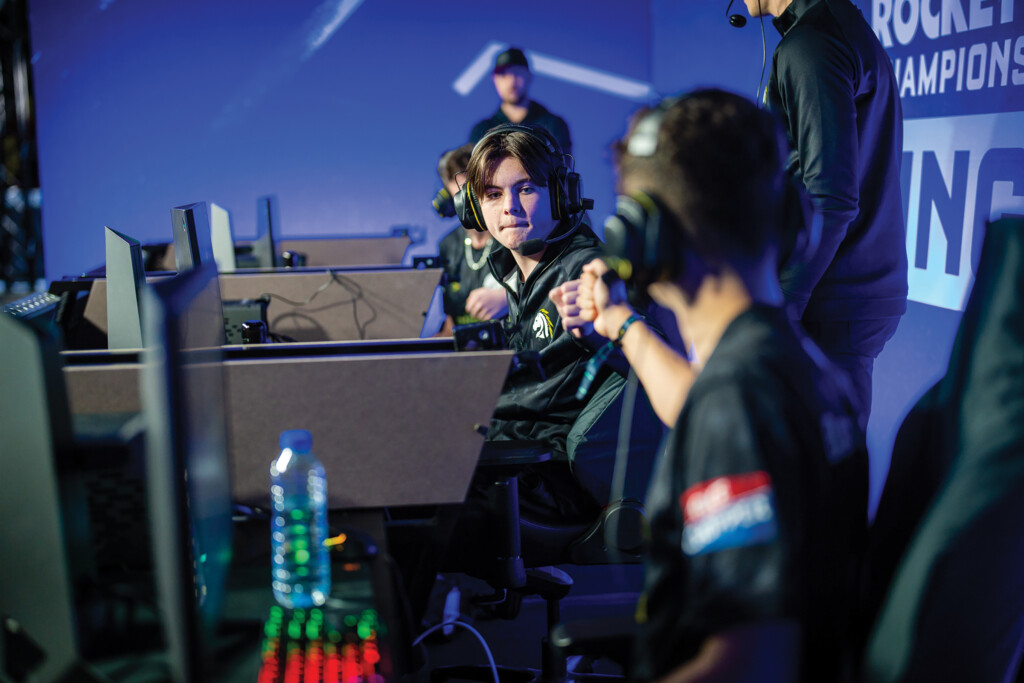 The concept for what would become the Pioneers organization came from the mind of LJ Browne when he was still just a senior at Blue Valley North High School in 2019.

Still fresh out of school, Browne, now 21 and a co-owner but working elsewhere in esports,  knew he would need to assemble an administrative team with the collective know-how to make things happen. He reached out to Alex Laughlin, who he knew via Twitter as the founder of a prominent competitive NBA 2k league.

“I wanted to learn how to raise money for my ideas for [the Pioneers]. I called him for advice on raising capital, and he ended up being the first guy I officially brought on board, probably about three to four weeks after I’d started the brand,” Browne says.

With Laughlin, 32, signed on as chief operations officer, the next step was to figure out how to introduce the concept that would become the Pioneers.

For this, they contacted Sam Kulikov, who produced their first promo video through Social Apex, a Kansas City-based digital marketing agency he co-founded with current Pioneers CEO Mark Josey, who would become CEO shortly after that, and Kulikov, the Pioneers’ chief marketing officer. At the same time, Terman would round out the co-founding five as a chief strategic advisor.

“Before you know it, we’re signing investors, securing sponsorships, and in the process of signing teams,” Josey says. “Now here we are, three and a half years later.”

In that time, the Pioneers grew to about 42 employees and established partnerships with local businesses like Price Chopper and Guy’s Snacks and sponsorships with brands like Logitech and SCUF Gaming. Sitting at yearly operations of around $800,000, the team has raised $1.6 million to date to expand the brand down the road.

On one hand, the bludgeoning appeal of esports and streaming—and specifically the ethical debate behind microtransactions—may appear to many Americans as nothing more than the two newest horsemen of an already apocalyptic modern media landscape—overarching services that compete for our attention by tickling our neurons with stimuli at the probable cost of our future attention spans.

Kulikov, 26, urges any would-be critics or even the strongest skeptics to take a closer look. Unlike binging a streaming service or becoming an unfeeling product of the algorithms, gaming is particularly unique in that it is an active medium—one that people of all backgrounds all over the world seem to overwhelmingly enjoy.

“You think about the last fifteen to twenty years of media and how it created this ‘dystopia of connection.’ We’re communicating every second, but we’re not really connected,” Kulikov says. “I think that [esports] is a natural evolution of human connection. Gaming and live stream content is reassuring us that the ability to be connected and be able to find that sense of community and those friendships that maybe some of us were missing when we were just engaging on social media platforms.”

At its very best, gaming—and the interactive, participatory experience it has become—represents what Kulikov describes as “a self-serving ecosystem.”

“Traditional advertising is starting to lose traction in that regard. It’s not wasted. It’s not useless, but at the same time, we’re talking about media and the consumption of content. Gaming is at that forefront,” Kulikov says.

Understanding the KC Pioneers as a media conglomerate, as a brand, as that sort of malleable, post-postmodernist concept, instead of a traditional legacy sports franchise, is crucial to this idealogy. 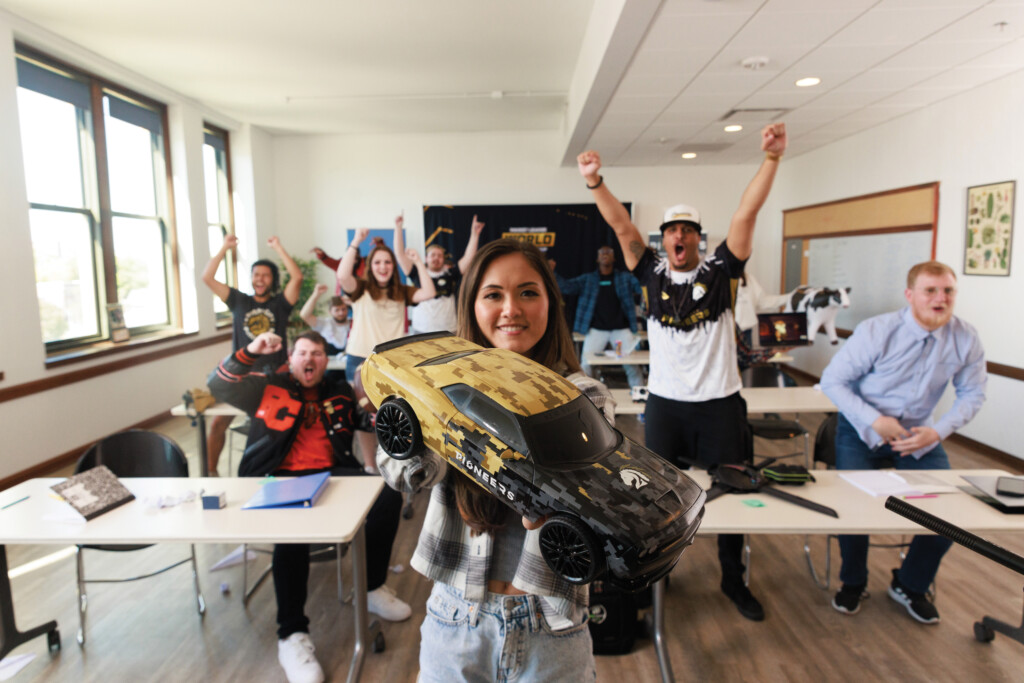 Despite the obvious differences between “traditional” sports and their digital brethren, the intersection is also a fascinating subject of discussion. As young professional NFL, NBA, and MLB players come up from Gen Z and beyond, more and more are making themselves visible to fans as streamers and even doing promotional partnerships with popular titles.

Trey Smith, the sixth-round draft pick and current starting guard for the Chiefs, is an excellent example of this trend on the local stage.

In 2021, Smith was on the cusp of being drafted to play a child’s sport professionally for millions of potential lifetime earnings. Afterward, the Grand Champion ranked Rocket League player said he was too busy collecting boosts and tallying shots on goal to worry much about where the chips fell.

Gaming can certainly provide relaxation and a welcomed distraction for athletes trying to relieve physical and emotional stress a few days before a must-win game. On the flip side, it can also offer a competitive outlet for an injured player as he or she awaits surgery or goes through their rehabilitation process.

“These professional athletes are humans too. This is how they decompress. This is what they do, and you feel and connect with that,” Laughlin says.

Another benefit for pros who stream comes in the ability to connect with fans in a much more intimate, interactive setting—allowing them to develop their brands outside of the 100+ horizontal yards that dictate much of their primary profession.

“When you’re on the field, you have your helmet on, and people don’t see you. What we’re seeing now with NFL and NBA players, in particular, who are involved with gaming is that these athletes are going to continue to have more and more bargaining power when it comes to building their brand, doing things their way, and connecting with [fans and] consumers in their own way,” Kulikov says.

All the while, local professional teams in traditional sports and the Pioneers’ venture into the new realm of esports can and should coexist.

V. Foundations and the Future

One of the founding principles of the Kansas City Pioneers is the belief that anyone can answer the call that millions of esports and streaming fans all over the world have already picked up over the last decade or two. When viewed properly as the active medium it inherently is, gaming is often at its best as a socially stimulating and, ideally, inclusive experience.

This philosophy led the investment in the future of esports by purchasing a female-only competitive Rocket League league called Women’s Car Ball, the second largest of its kind worldwide, roughly one year ago.

“The goal right off the bat was to carve out a safe space for women in esports and gaming,” Josey says. “So we decided first to get our own team and give them the same gear, resources, and the peripheral support we offer our other teams, including access to our behavioral cognitive performance coach.”

Initially, the Pioneers had just a single team in this union, but it didn’t take long for them to purchase the whole league outright.

“We just joined force with the existing community to actually help drive tournaments, find enterprising leadership, and ultimately establish a league with the proper infrastructure and scale,” Josey explains. “It takes that level of investment to develop skills and grow the competitive player pool. We wanted to provide a pathway for that.”

Josey says the current WCB community includes roughly 1,000 players plus a Discord community with about 250 pros in around 30 Rocket League teams.

Locally, the Pioneers have several active partnerships with organizations like The Boys & Girls Club of KC—for whom they will collaborate with other local organizations like the Kansas City Esports Coalition to host events like Gaming for Good, a charity Rocket League tournament benefitting those very same boys and girls.

“You have to have an emotional commitment to what you’re doing. I think that’s number one,” Josey explains. “We really believe in this. We’re really passionate about being a premier entertainment, lifestyle, and gaming organization across the globe while being in Kansas City and able to reflect and give back to the community we serve.”