Anything for Jackson mixes farce and brutality in a reverse-exorcism 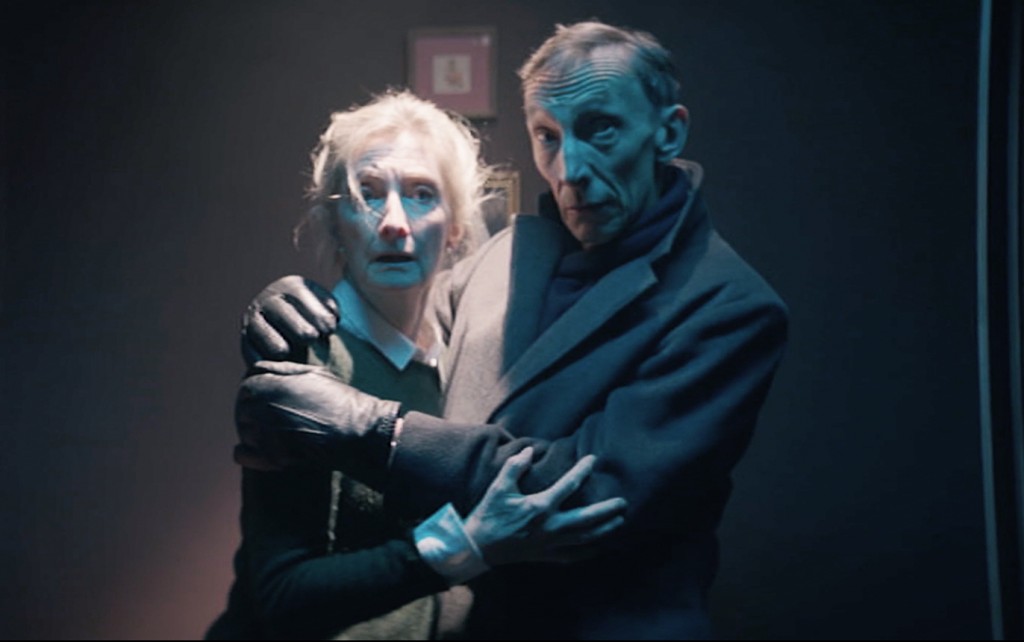 Shudder has hit big with its surreal horror spectacle Anything for Jackson. Written from the creative (maybe even slightly deranged) mind of Keith Cooper and directed by Justin G. Dyck, Anything for Jackson is an endearing yet disturbing story filled with nightmarish visuals that will leave horror fans licking their lips wanting more. With flashes of Rosemary’s Baby, Anything for Jackson contains all the devil-worshipping awkwardness one’s impure heart could ever want, wrapped around a horrific story with a surprising amount of heart. Sheila McCarthy and Julian Richings star as unlike horror leads, showcasing how far grandparents will go for their precious little darlings.

Anything for Jackson centers around Audrey (McCarthy) and Henry’s (Richings) sinister plan to bring their grandson back to life. After kidnapping Shannon, a pregnant soon to be a single mother (Konstantina Mantelos), Henry and Audrey’s gentle nature is put to the test as they read from a Satanic book of the dead to begin the ritual to bring their grandson back. Promising no harm to Shannon or her unborn child, things get complicated as the elderly couple accidentally summon unwelcome and terrifying spirits into their quaint little home.

Throughout its runtime, Anything for Jackson feels like an uneasy childhood nightmare where grandma and grandpa try and kill you. Sweet and sentimental in one moment, while graphic and disturbing the next, the film is not afraid to play around with tones creating its unique and enjoyable viewing experience. The highs of the horror are high and the touching moments hit the spot in your soul just right. This is complemented perfectly with clever bits of humor and absurdism that keep the film from ever taking itself too seriously and the audience on their toes.

There are many twists and turns to be found in Anything for Jackson, some humorous some horrific, but the film’s editing contains the simplistic yet grand story. With a majority of the film taking place in one location, Dyck contains the horror in a successful fashion. Like a game of tag without an outbounds area for breaks, the film lets you catch your breath anytime you step away from the home, but while inside it is absolute hell, literally. The pacing is perfect and keeps moments from dragging. The audience is never left anxiously waiting like Henry and Audrey are. Once the film gets going, it goes until the jaw-dropping bloody climax. As in all good horror films, the stakes are high and anyone can die at any minute.

The film’s farcical elements are an absolute delight in the midst of the brutality that’s on the screen. With a narrative tactic of “what can go wrong, will go wrong” Anything for Jackson feels like Neil Simon took a bunch of acid and wrote an outlandish script during a bad trip. This humor is great for the storytelling to move the plot but also gives the film a lightness making it easier for audiences to get invested in the world of extreme devil-worshipping and abduction. The contrast between the light tone with the surreal horror allows for the audience to connect with the characters as opposed to being lost with the spectacle. Unlike jump-scare horror that uses its characters as avatars to take you through the haunted house, Anything for Jackson employs dramatic techniques to get audiences inside the character’s psyche as they go through the worst time of their lives.

With such an exciting premise, it is disappointing that the dialogue doesn’t quite match up the allure. For a horror film breaming with creativity, the dialogue is far too bland. Not guilty of the trope of cheesy one-liners and stupid decisions with the intended purpose to make audiences angry, the conversational dialogue between the characters of the film falls flat. The dry dialogue poorly sticks out while the performances and visuals pop with flare. This isn’t helped by the character’s cookie-cutter motives. The sharp narrative keeps everything in order and running smooth, but the film would hit event greater heights, had the conversations been more original.

Horror performances are normally either over the top in an unbearable manner or completely phoned in by the actor who thinks their too good for the role. This is far from true in Anything for Jackson, as the performers bring nothing but their best to the table. Soaked with realism, the characters are able to find a balance of being believable while everything around them is unreal. McCarthy and Richings are superb as Audrey and Henry and fit the role perfectly. Both deliver modest performances where the character’s inner workings are easily shown through their tone and expression throughout. They play typically good people who are damaged in a way many will never know. The pain and unfairness of life have driven them crazy and though you wish for Shannon’s safety, it’s hard not to root for Henry and Audrey’s happy ending as well. That’s a tall order for any actor to do in horror and McCarthy and Richings do it perfectly.

Josh Cruddas is also a standout playing Ian, an anti-social sociopathic satanist that Henry and Audrey meet through their cult meetings. Cruddas transforms into his role and afterward, I had to look up and see if he was an actual hardcore satanist production found due to how believable he was. Serving as one of the film’s many antagonists, Ian is there to remind you that people can be just as scary as the monsters in our stories. Cruddas gives the performance his all and the film is made even better because of it.