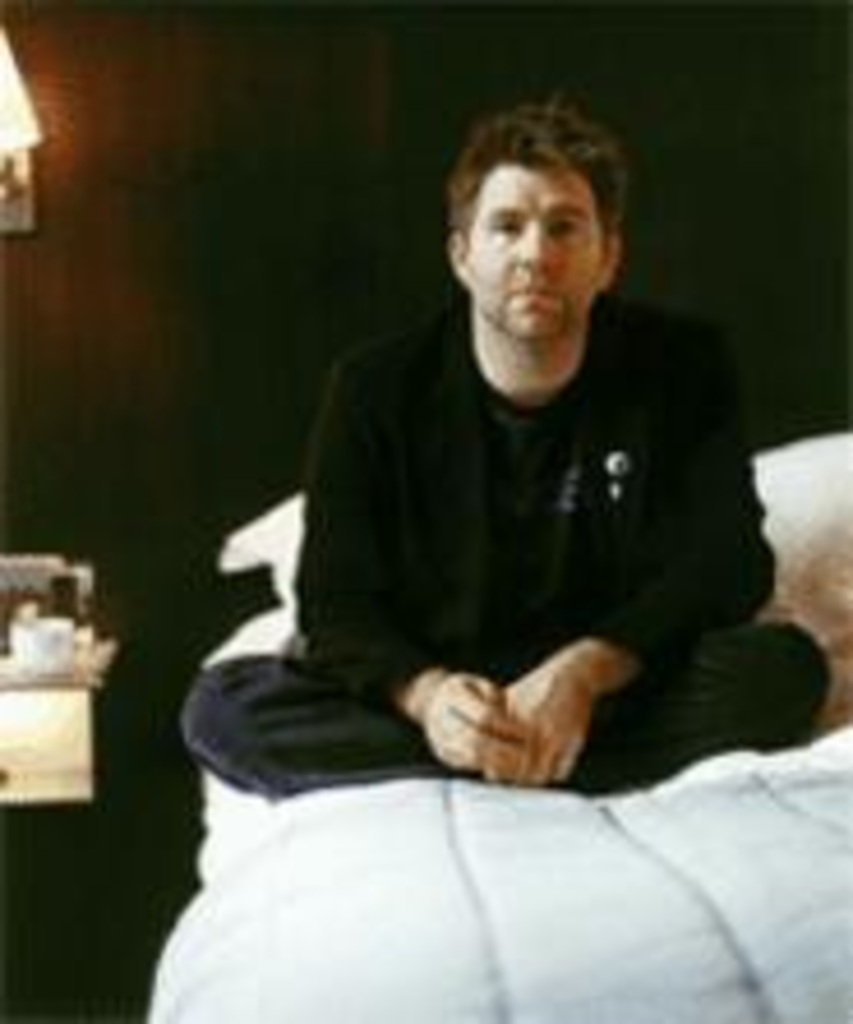 James Murphy is tired. It’s 10 a.m. in Brooklyn — a decidedly unrockin’ hour for any rock star. But it’s not just the time of day that’s weighing on him.

“I just don’t see the point of being in a rock band,” the 35-year-old musician and producer laments. “I love rock. I was raised on rock. But especially now that there’s so many bands, it’s just been reduced to an effort of ego — to ‘Let me tell you how I feel.’ I get bored of watching people talk about themselves.”

Murphy is a successful, in-demand producer, the prime mover behind the acclaimed indie dance act LCD Soundsystem and the co-founder of the trailblazing techno-trash label DFA (Death From Above) Records — home to Black Dice, the Juan Maclean and, of course, LCD Soundsystem. So it’s surprising to hear him talk so disparagingly.

“I make dance music, or disco,” Murphy explains. “And dance music isn’t really about anything. I can tell if it’s working: ‘Are people dancing? Yes.’ Then I’ve achieved my goal.”

Despite Murphy’s disillusionment, it should come as no surprise to anyone who’s heard an LCD Soundsystem record that his musical history is rooted firmly in rock. In the ’90s, he was in the marginally successful alt-rock outfits Pony and Speedking. But his tenure in rock bands soured him on the entire milieu when he realized that the same cliques, hierarchies and petty power games that existed in his New Jersey high school exist in the indie-rock world as well. At that point, Murphy focused his attention on developing his mixing skills as a live soundman. Then, while working on David Holmes’ Bow Down to the Exit Sign, Murphy met Holmes collaborator Tim Goldsworthy, and the two cooked up the idea for DFA and the musical project that would become LCD Soundsystem.

LCD Soundsystem hit the ground running in 2002 with the fiercely funny dance-floor banger “Losing My Edge,” the diatribe of a snotty music hipster struggling to stay relevant and hip in the face of the rapidly changing rules of cool. While Murphy’s winking lyrical references to Can, Suicide and Niagara drip with irony, they also reveal a writer and musician with a deep and passionate knowledge of pop-music history. Musically, the record was a delicious sonic train wreck of cheap electronics, recycled beats and plenty of noise. “Losing My Edge” was the blueprint for what would become Murphy’s mission: making music that “isn’t really about anything” — except dancing and the occasional knowing smirk.

“Losing My Edge” appears on disc two of LCD Soundsystem’s self-titled debut, its first proper full-length. The first CD contains new tracks; the second is a compilation of all the singles released by the group over the past four years. Murphy’s contempt for hipness is evident in the low-budget artwork and the refusal to allow his early singles to become fetish objects; buy LCD Soundsystem and you instantly know as much about the outfit’s history as the hiplomats who were there back in ’99.

Disc one opens with another hilarious, hip-shaking track, “Daft Punk Is Playing at My House.” It’s the fictional tale of a kid who saves up all his money to hire the robo-electro-Franco-weirdos to play a punk-rock-style show in his basement. Murphy’s delivery is part Mark E. Smith (a hero of his), part Mick Jagger and part Marilyn Manson. The beats are big, dumb, obvious and irresistible, like the Chemical Brothers with a sense of humor and better taste. Murphy even drops a ridiculous a-go-go bell solo in the middle that’s both funny and musically effective.

“I like percussion,” he says. “It makes you boogie, and it’s funny. And I like being the big, giant dude with nothing to do, standing in the middle of the stage, banging on a bell.”

After “Daft Punk,” LCD Soundsystem heads off in a million different directions. The nine tracks groove compellingly, but Murphy thumbs his nose at predictable patterns and genres, bludgeoning all the sacred cows of rock and electronic music in a disorienting, exhilarating ADHD fit. “Too Much Love” could be a cast-off single from Cabaret Voltaire’s house-music phase; “Tribulations” sounds like a moody, post-Jimmy Somerville Bronski Beat B-side, complete with octave-hopping bass line and Hi-NRG beats. “Movement” has all the noise and dissonant guitar of early Joy Division or Suicide, but “Never as Tired as When I’m Waking Up” is a sweet, melancholy love note that flirts slyly with David Gilmour and John Lennon. And “Thrills” would be right at home on the Normals’ seminal 1978 EP. The album closes with the chilled-out, Polyphonic Spree-on-Valium ecstasy of “Great Release.”

The anti-hip, anti-rock, anti-electronic sound that LCD Soundsystem and other DFA acts have perfected evolved organically out of the musical lows of the ’90s. “There are always bad times in the middle of the decade,” Murphy says, teeing up his theory of musical evolution and devolution. “When DFA got started in 1999 and 2000, there was just so much to do, because things were so bad. Look at the late ’60s: Bands realized there was a lot to do. Then you hit ’75 or so, and you’re completely stretching. Same with the ’80s. 1981? 1982? Fuck, yeah. But 1985? Ugh. I mean, Gene Loves Jezebel?” Similarly, the self-indulgent indie rock and rote electronica of the mid-’90s gave birth to the gutter techno of DFA and LCD.

Live, the digital crunch of an LCD Soundsystem record is transformed into a real rock experience. “We’re a cover band,” Murphy explains. “The greatest LCD Soundsystem cover band in the world. There are different rules for records and live performance.” In fact, the live incarnation of LCD Soundsystem won’t even play some songs. Don’t expect to hear the thoroughly addictive “Disco Infiltrator” at a show anytime soon, for example. “We’ve made ten different versions of that song that sound totally different,” Murphy says, “but I’m still not totally satisfied.”

The perfectionism that drives Murphy to create ten variations of the same track is what makes his musical output — both as a producer and as a musician — so distinctive and, well, satisfying. His criticisms of the clichés of rock and electronic music are matched only by his own self-critique. Whereas Murphy says that rock musicians are trying too hard to “mean” something, he seems to strive almost as desperately to mean nothing.

And to move some butts.

“The more horrifying things get, the more people want to dance,” he says. “It’s cool to do something humiliating now.”