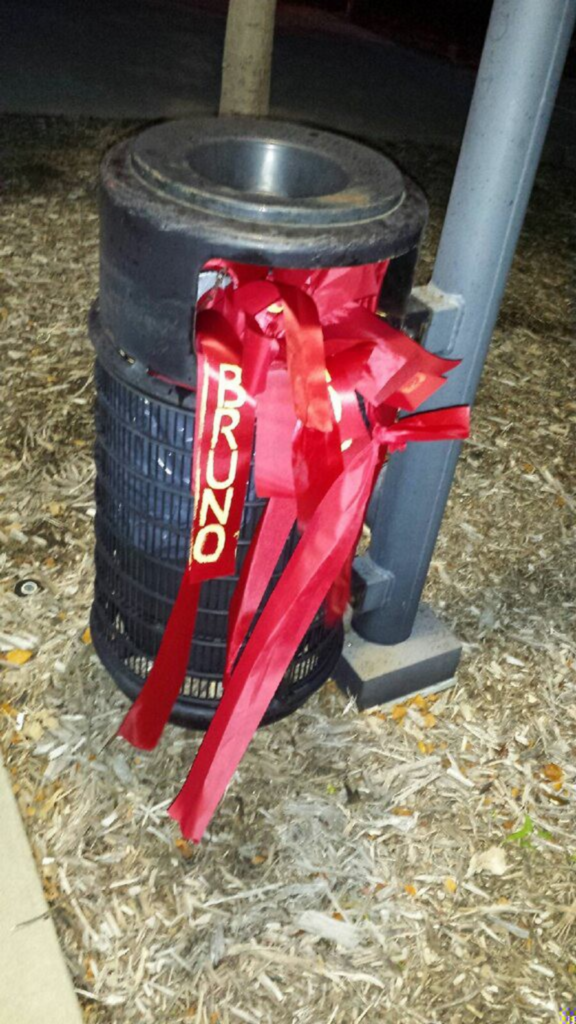 The Christmas-red ribbons had “Bruno” written on them in bright yellow and were hung from Broadway past Locust and from about 13th Street to Eighth or Ninth Street.

“We got together Sunday to have a prayer and a peaceful ribbon-hanging opportunity,” said Nino Bruno, who is a Kansas City fire captain and was off-duty during the event.

But a short time after they left downtown, on-duty police officers were seen using knives to cut down ribbons and stuffing them in trash cans.

“Ribbons are used for all kinds of things,” Nino Bruno, who videotaped on-duty officers cutting down ribbons, told The Pitch. Watch the video after the jump. “To be ripped down by on-duty police officers is a great waste of resources and a violation of our First Amendment rights. It’s censorship.”

Meanwhile, police union President Brad Lemon wrote in a blog post that Bruno ribbons were put up in the neighborhood of officer Donald Hubbard, who shot and killed Anthony Bruno during an altercation December 1 while working as off-duty security at the Marriott Hotel.

In a blog statement, Lemon wrote that “thankfully that officer and his family were out of town and did not have to witness the event.” On-duty police officers responded to the scene, Lemon wrote, as did a large number of off-duty officers.

“What happened this morning is unforgivable, and I understand how an event like this can bring up emotions that are difficult to deal with,” Lemon wrote. “I responded to the scene and met with a number of you. … I too am greatly upset about the events that happened today.”

The Brunos say they were unaware of anyone tying up ribbons in Hubbard’s neighborhood. Stephanie Bruno said some people took home extra ribbons because they said they wanted to put them up in their neighborhood, but no one said they were going to Hubbard’s subdivision.

Problems between the police and firefighters have been percolating since Bruno’s death.

On December 1, Bruno and his wife had been to their wedding reception and had grabbed a cab to take them to the Muehlebach Hotel for the night. Once they reached the hotel, there was an argument over the fare, and the cab driver called Bruno’s wife a “cunt.” Bruno hopped out of the car and punched the driver.

Bruno fled the scene and was followed by Hubbard, who was working off-duty security at the Marriott Hotel, to Baltimore Avenue. During the fight, Hubbard shot Bruno twice in the chest.

Hubbard was cleared of criminal wrongdoing by a grand jury in February.

The Pitch obtained videos of the altercation from police and had them professionally enhanced by a nationally known expert. (Read the story here.) The newspaper also obtained police records showing that if Hubbard had followed police standards at several key points, the confrontation would not have required lethal force. One of the documents, a police internal investigation that had not been made public, had found that Hubbard was not carrying his police-issued radio, and he never contacted dispatch to give the location of his off-duty assignment, as police rules require.

The Pitch also found in a separate case involving a motorcyclist that police had fabricated information in police reports.

Since the shooting, the friction between police and firefighters has intensified to the point that Lemon, the presidents of two firefighter locals, and another police union representative met last Thursday to work out a resolution, Lemon wrote in his blog post.

Lemon wrote that he was also in “constant contact” with Mayor Sly James and Chief Darryl Forte.

James and Forte so far have refused to comment publicly about The Pitch story and its findings. Alvin Brooks, police board president, and John Sharp, chairman of the City Council public safety committee, also haven’t yet commented.

The Bruno family filed a lawsuit a couple of weeks ago against the Marriott Hotel, which owns the Muehlebach, and Hubbard in his capacity as an off-duty security officer.

The police department since the 1930s has been under the control of the state. The city is required to fund the department but has little say over its operations.

Councilman Ed Ford said Monday he didn’t feel it was his place to comment.

“We don’t have local control, so that is a better question for the Board of Police Commissioners,” he said.

Gov. Jay Nixon, who appoints the police board members, also has refused to comment.

Stephanie Bruno, a lawyer and former assistant prosecutor, told The Pitch that “the wall of silence is very disturbing. It’s very counterintuitive.”

Nino Bruno said on Sunday night that he had just gotten home when he got a phone call from a family member who said police were cutting down the ribbons. He and several family members drove back downtown.

“And sure enough, they had been taken down and stuffed into trash cans,” Nino Bruno said.

On Grand Boulevard, Nino Bruno spotted “two officers, their hands full of red ribbons, and they were cutting even more off the poles.”

Bruno asked the officers if their supervisor had ordered them to cut down the ribbons, but the officers said no, and one said, “I’ve got nothing to say to you.”

One of the officers used a pocket knife to cut a ribbon as Bruno was talking to him.

“Hey, you’re on-duty cutting these down,” Nino Bruno said. “Do you know the guy you’re doing this to?”

Nino Bruno said they put up more ribbons, but by midafternoon Monday, most were gone except along Broadway.

In Lemon’s blog post, he asked police officers to remember that there is a court process to deal with these types of issues, “and we will be using that avenue.” He also told officers that they had the right to be upset but they needed to be polite if they come into contact with Kansas City firefighters.

“We choose this profession, our families did not, bringing this fight to our home is unforgivable,” Lemon wrote.