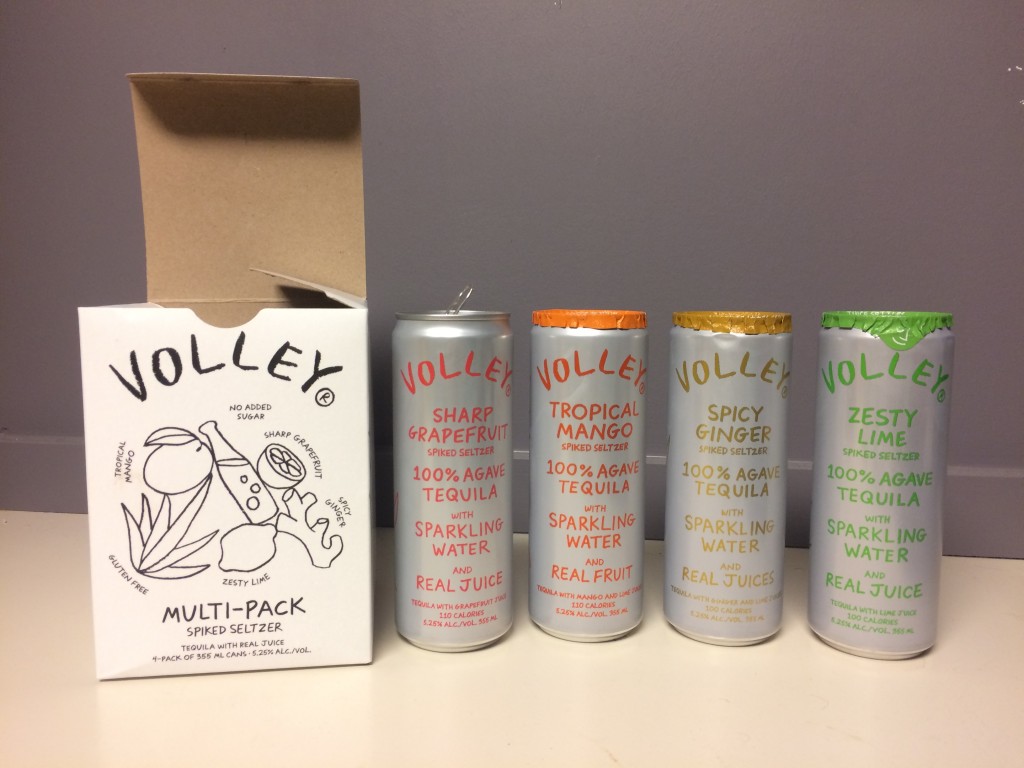 As I have made very clear, my taste for fine dining and drinking isn’t exactly top-shelf. This is primarily due to the fact that I attempt to write for a living, and it is simply easier for me to justify drinking Miller High Life than exquisite booze.

This being said, when I can get the good stuff, I like my wines red and dry and my coffee dark and black, which is why I found the zero-sugar added Volley Seltzers to be a refreshing pivot away from the more outspoken canned cocktails I’ve tried.

These 355 mL seltzers all max out at 110 calories, are completely gluten-free, and made with 100% blue agave tequila, organic juices, and seltzer water—comparable to a respectable craft beer at 5.25% alcohol per volume.

Volley has not sacrificed any flavor in this pursuit. The sweetness is perfectly subtle for each of the four current flavor offerings: Zesty Lime, Sharp Grapefruit, Spicy Ginger, and Tropical Mango.

I opened the seltzers in order of what flavors I most wanted to try, starting with sharp grapefruit. Surprisingly, this was maybe the one I found most underwhelming of the four. As a grapefruit person, I enjoyed my time with this can. As a tequila skeptic, however, I was perhaps still dipping my toes in. I most definitely would have liked to try a second before giving this verdict, however.

While most mango products, in my experience, are bogged down with excessive sweetness, this one gives the mango the respect it deserves. It tastes more like mango and much less like… well, whatever most mango-flavored products end up tasting like.

I’m not sure if I liked this one or the sharp grapefruit better. I’d say it’s a draw. Fans of mango, the fruit, or the extinct Mango Juul Pods will especially enjoy this one.

I took a break halfway through and paired my next can with a lovely meal consisting of a single McDouble, add Mac Sauce. This is important, not only because Mac Sauce is delicious, but also because it was the sole reason I went with zesty lime as my third sample instead of spicy ginger.

For those of you who are unaware, lime and tequila are something of an item, and so I would expect this flavor to be the most popular of the four based on popular recognition. By the time my gullet was filled with processed beef and cheeses, I had the luxury of chasing such an abominable one-course meal by way of what was, in fact, a very zesty tasting lime-tequila seltzer.

It had that classic Coke vibe, and I didn’t need to preface it by licking salt off of my filthy thumb-pit at John’s Big Deck. Think: margarita without the sugar-fuck.

Finally, I opened the spicy ginger, which was fantastic. My only complaint is that, just maybe, it could be spicier than it was. I never really considered ginger and tequila as a worthy match until now, but I am now a believer.

Even if tequila goes home to lime every night, it’s probably thinking about ginger when it gets bored. The ginger here is like mustard on a bratwurst—perfectly complementary to the tequila it shares an abode with.

Conclusion: Volley Seltzers are… good for you? Pick some up for $12 per 4-pack or order some in bulk at Volley’s website.