An adventure to Choga Korean Restaurant heats up our curiosity 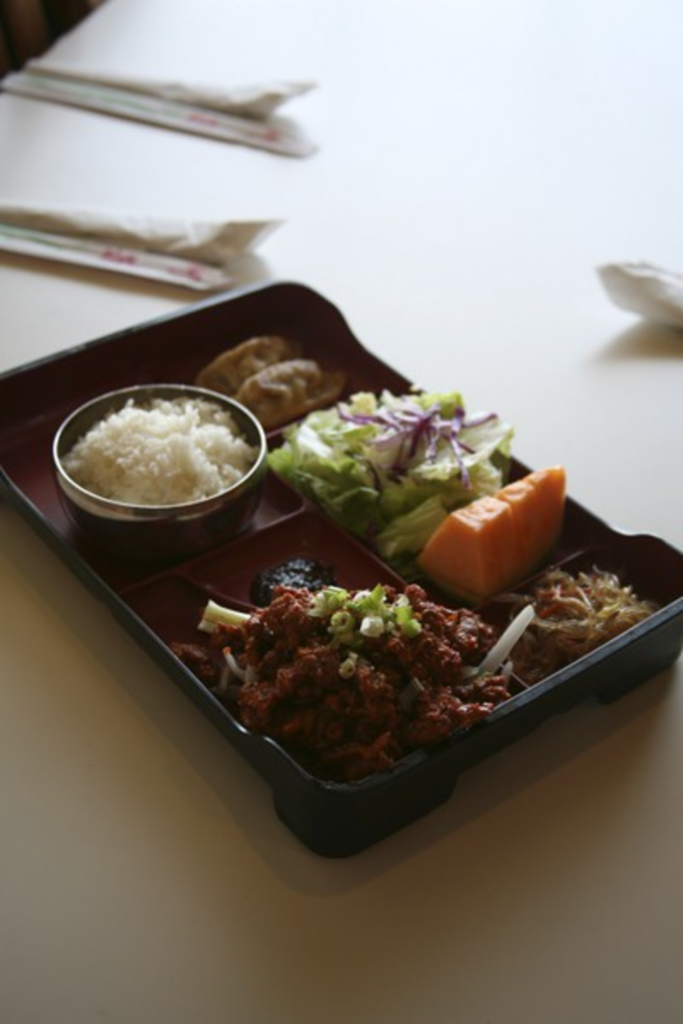 Whenever North Korea is in the headlines, the news is usually disturbing. Last week, there was the announcement that it was restarting its plutonium reprocessing plant and barring U.N. inspectors. And there’s the ongoing drama surrounding the ailing health of the mysterious Kim Jong-il — the vain dictator fond of wearing sunglasses, platform heels and a bouffant hairdo.

I confess that when I switch on National Public Radio’s Morning Edition, I only half-listen to the latest news reports about the ever-looming potential nuclear disaster and what might happen if Kim Jong-il croaks. It’s worrisome stuff, but I’d rather experience Korean food than Korean fear.

Not until I ventured into Overland Park’s Choga Korean Restaurant was I inspired to learn more about the ancient culinary history of the Korean peninsula. Such new curiosity is one of the benefits of eating less-traditional ethnic cuisine. It’s one thing to appreciate kimchi, the spicy fermented vegetable dish served with almost every Korean meal, but I wondered about the evolution of this pickled delicacy after tasting Choga’s tongue-searing fermented cabbage. Kimchi is a delicious, sinus-clearing accompaniment to grilled meats and casseroles, but why had it become such an important feature of the Korean meal? According to the Food Lover’s Companion, kimchi dates back to the seventh century, when the art of pickling and preserving vegetables became a tradition in Korea; the use of chiles to spice up the fermented product came much later, in the 16th century, when Portuguese traders introduced peppers to East Asian countries. Now the condiment — likely as popular as ketchup is on American tables — is one of the featured side dishes in the banchan, an array of little plates served with meals.

I occasionally ate lunch at Choga many years ago when I worked in Overland Park. The first time I sat down for dinner, I brought along my friend Bob, who is notoriously wary of unfamiliar cuisines. “What exactly is Korean food?” he asked on the drive to the restaurant. “Is it like Chinese?”

It’s not, even though Korea borders China. The food is distinctive: heavy on rice, pickles and fish (like Japanese food), but with a history of barbecued meats called gogi gui and sexy seasonings of red pepper, green onion, garlic, ginger, mustard and vinegar.

In Choga’s mustard-yellow dining room, several of the tables have built-in gas barbecue grills, but they no longer work, according to our skinny, bespectacled server. I looked down at a gaping tear in the leatherette booth and then around at the rest of the joint, which may be the most unattractive dining room in Overland Park. I could read the concern in Bob’s eyes: “What fresh hell is this?”

“It’s an adventure,” I said, hoping to sound reassuring, even confident. He unwrapped chopsticks from a paper napkin and grimaced. “Do you have forks?” he asked the waiter. The server looked at us blankly and shook his head. “No fork.”

I quickly opened the menu and ordered a couple of starters. Not the soondae sausage, made with noodles and beef blood, but something that sounded maybe a shade more familiar: pan-fried beef-filled dumplings. Actually called mandoo, the word sounds a lot like mantou, the Chinese word for a steamed bun. A friend of mine who loves Korean food later told me that if the Korean version of a pot sticker is grilled or fried, it’s actually a gunmandu. I think I’ll just stick with fried dumplings. And Choga’s are excellent — slightly crispy on the surface, filled with well-seasoned ground meat and served with a fine soy-and-scallion dipping sauce.

Even better was the kimchi jun, a thick fried pancake made with flour batter; chopped carrots, onions, squash, and jalapeño peppers; and a lot of minced shrimp. This was the least costly of the three jun options on the menu (a hae mool pah-jun, with sliced squid, is nearly $18) but was totally satisfying — and filling! It would be easy to make a meal out of this savory flapjack. Bob was impressed. “So far, everything I’ve tasted has been out of this world,” he said.

He also noticed that we were the only non-Koreans in the restaurant. The dining room was barely one-third full on this weeknight, but two servers were scurrying around with trays of banchan. Our server plunked down six little bowls in the center of the table. One was traditional cabbage kimchi, another had fiery marinated cubes of daikon, another a vinegary bean-sprout salad. Still another tiny bowl had a dollop of salty bean paste, a spoonful of paper-thin vinegared cucumber slices and, lastly, chilled slices of chewy marinated tofu. Sticky white rice came in little metal-covered pots, and another plate was heaped with fresh, crisp romaine lettuce.

“What do we do with all of these things?” Bob asked. I didn’t have to answer. Once the server brought out our meals — the popular grilled-beef bulgogi for me and a clay tureen filled with browned short ribs, sweet-potato noodles and a fragrant broth for Bob — he patiently showed us how to fold a lettuce leaf around a bit of beef, a dab of bean paste and a pinch of kimchi to eat it like a wrap. This wasn’t easy for Bob, whose meal was essentially a soup. But he bravely sampled everything except the tofu, which was fine because I ate it all myself.

My bulgogi had arrived on a sizzling metal plate, like a good Midwestern steak. An intoxicating aroma floated up from a mound of thinly sliced beef that had been marinated in soy, sesame oil and onions. It’s one of the most popular Korean dishes for non-Asians, I discovered later, because it looks like a variation of the fajita.

I finished my dish, but Bob had his boxed up to take home. We might have asked about dessert (I can’t remember), but we didn’t order any. “How can you eat one more thing after all that?” Bob asked.

A few nights later, I returned with Wendy and Eddie. Wendy had never considered herself a particularly adventurous eater until several years ago, when she traveled to Tibet and dined on delicacies like yak yogurt and mutton stew and God knows what else. “After that,” she said, squeezing into a booth at Choga, “nothing frightens me.”

A former vegetarian, Wendy was charmed and called the little meatless banchan dishes “a grazing festival.” She ordered a rice dish, bimimbap, with vegetables, beef and a fried egg. In Korea, this popular dish is a way to use leftovers, but Wendy didn’t leave a grain of rice in her bowl. Eddie loved the bulgogi that I insisted he order, and I had the punchier pork version, dae ji bulgogi, with slices of pork loin marinated in hot-pepper paste, wine vinegar, garlic and ginger.

I overindulged in that dish and so much kimchi that I was practically breathing fire by the end of the meal.

“There’s only one way to correct that problem,” Wendy said, after I paid the bill. “We go out for frozen yogurt.”

A perfect idea for any culture.