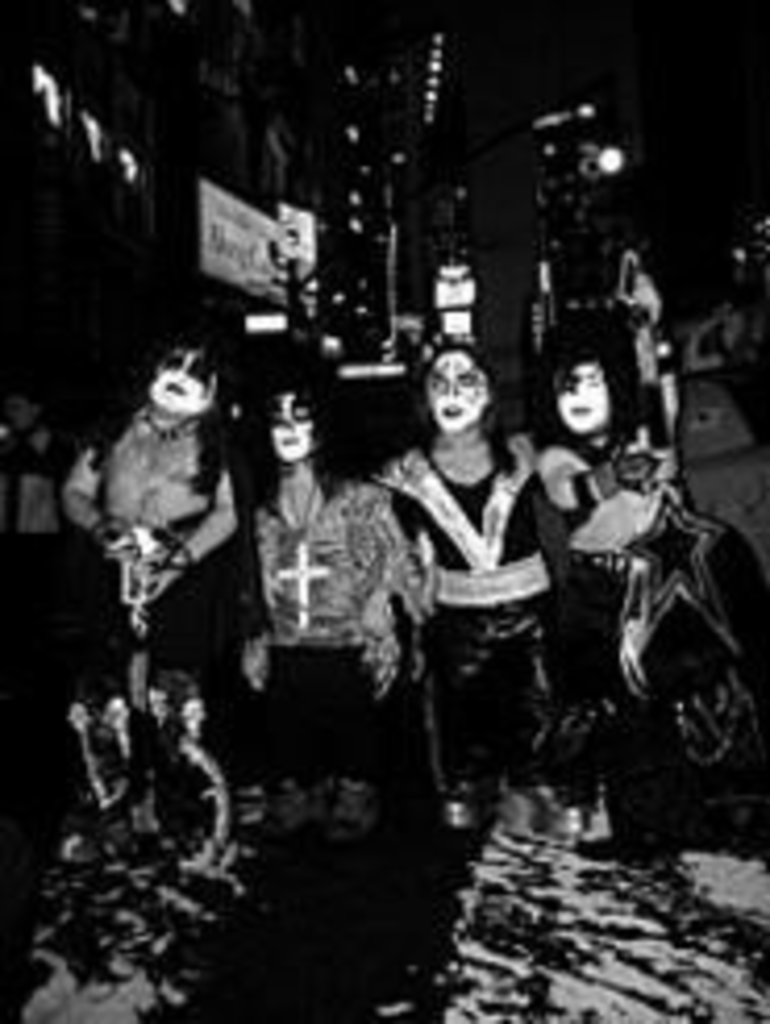 But because tribute bands rarely reach that level of fame — much less gain respect for their musical skills — the key to successful mimicry is cleverness. Any group can christen itself after its heroes’ most popular song; tribute-band.com lists at least three bands named after Kiss’ Destroyer. But it takes a truly inventive mind to title a group Alcoholica, Non Jovi or Alanis Moreorless. Or to form the enigmatic Chicks With Dixie, an all-transvestite Dixie Chicks tribute band. Or, for that matter, to be one of the following novelty tribute bands — which, in a fit of postmodernism, pay tribute to the concept of tribute bands by putting a quirky twist on the straight musical homage.

Premise: Five spunky females with a love for AC/DC, rocking out with their (nonexistent) cocks out to Bon Scott screamers.

Resemblance to original: Like its fallen idol — Scott died from his excessive boozing — the quintet’s biographical gushing about alcohol hints that it can certainly match drinks with its idols.

Adventures in rock excess: Not content to do dirty deeds strictly on its San Francisco home turf, the group traveled to an AC/DC convention in the UK in August — and opened for founding member Dave Evans.

Odds of original band kicking its ass: Not even AC/DC would mess with five women hellbent on faithfully re-creating the raucous pre-Back In Black riffage, down to Agnes Young’s femme version of the schoolboy uniform worn by her namesake.

Premise: Mash the thrashing riffs and doomy lyrics of Metallica with the boyish melodies and words of the Beatles. The resulting tunes are perfect metal maelstroms with sugarcoated centers: “I Want to Choke Your Band,” anyone?

Adventures in rock excess: Only in bandwidth. According to a recent story in the Cleveland Scene, the new song “We Can Hit the Lights” was grabbed 10,000 times by eager downloaders in its first 5 days online.

Odds of original band kicking its ass: Channeling anger inappropriately is probably taboo for the therapy-enlightened Mighty Met — but because lawyers for both bands might not share this Zen peace, Beatallica distributes its music for free on the Internet.

Premise: Five preteens slap on the sneers and sunglasses to sing along to original Guns N’ Roses hits karaoke style — while wearing “metal” outfits that are as badass as the juniors department at Dillard’s.

Resemblance to original: Not bad. According to Lil’ Axl’s bio, her family says she’s “a drama queen.” But despite a truly bitchin’ top hat, Lil’ Slash’s vice is watching the stupid cartoons his mom dislikes — not swigging whiskey.

Odds of original band kicking its ass: Big Axl may have violent riots follow him like jokes about Chinese Democracy, but even he wouldn’t hit little girls and boys who look like they just raided their parents’ closets for Halloween.

Adventures in rock excess: Sparkly boots and photos of adoring female fans abound on its Web site, so it seems the wee lads are enjoying their time as the modern equivalent to the Munchkinland chorus.

Odds of original band kicking its ass: Gene Simmons has met and given a tongue waggle of approval to the band, so he’ll likely reserve any bludgeoning for his recent cover of the Prodigy’s “Firestarter.”

Premise: The world’s portliest Misfits tribute band, these rotund rockers dish about food and fatness in parody tunes like “Mommy, Can I Go Out and Grill Tonight?”

Resemblance to original: They’ve got the ghoulish makeup and grimy punk riffing down — as well as snazzy nicknames (Sir Lord Butterscotch and Foil von Franksnbeans) to carry on the Misfits’ alias-rich tradition.

Adventures in rock excess: Only in the amount of doughnuts, Twinkies and PBR consumed.

Odds of original band kicking its ass: Given that ex-‘Fits vocalist Glenn Danzig was recently spotted getting the proverbial stuffing kicked out of him backstage in Phoenix, it’s highly doubtful he could do much about the champion chompers.

Resemblance to original: Not entirely clear anatomically, but sonically the nekkid noodlers do the original group proud with longhair-approved fretwork and howling.

Adventures in rock excess: It doesn’t get more decadent than guitar-playing exhibitionism, but a member of the band topped that in 2001 by getting kicked out of a Los Angeles club after a screening of cult flick Heavy Metal Parking Lot, reportedly for burning the set list of another cover band.

Odds of original band kicking its ass: Original Priest vocalist Rob Halford asked Spin magazine in June, “What was the singer like and how big was his unit?” Perhaps, er, tapping Nudist Priest’s ass might be more his style.

We Got the Meat

Adventures in rock excess: A sold-out July gig with the Misfats and Mini-Kiss — otherwise known as a triple bill of epic tribute proportions.

Odds of original band kicking its ass: Carlisle was briefly in the original Germs lineup, and she, guitarist Jane Wiedlin and bassist Charlotte Caffey were denizens of the late-’70s Los Angeles punk scene, so they’d have no trouble dispensing with the imitators.