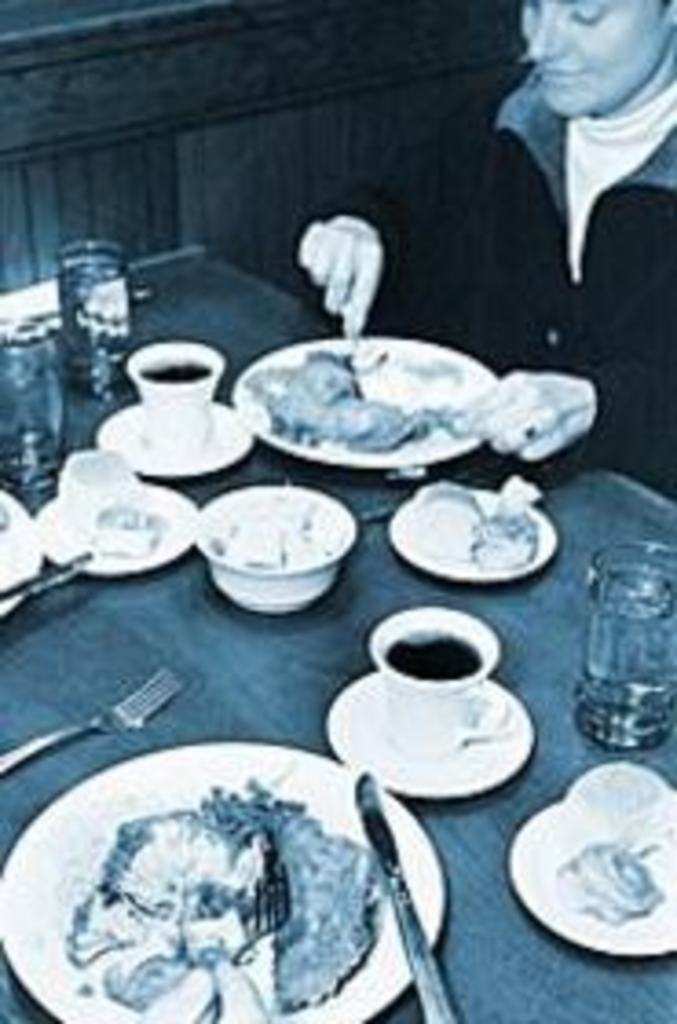 I looked up from my baked chicken breast just in time to see her: a beaming octogenarian in a blue knit cap, a purple polyester floral dress, knee-length stockings woven in a rainbow of pastel colors, and sturdy brown shoes. She moved slowly through the dining room, carrying her check and her overcoat and smiling at everyone she passed.

No restaurant in Kansas City gets as much ribbing (both good-natured and cynical) as Leona Yarbrough’s in Shawnee. KMBZ 980 morning personality Noel Heckerson has been known to crack that he was “blinded by the gleam off the silver heads in the dining room.” One of the Kansas City Zagat Restaurant Surveys instructed diners to “Be prepared to show your AARP card.” My own mother, unhappy about turning 65, coldly appraised the senior citizens picking at liver and onions or tapioca pudding at Leona Yarbrough’s former, more tastefully appointed Fairway location: “I’m not ready for this yet,” she said acidly. “Hell, this isn’t a restaurant, it’s a geriatric ward.”

But that’s not fair. Sure, Leona Yarbrough’s is enormously popular with the Geritol set — few places in the greater metropolitan area offer homestyle dinners at such reasonable prices — but there are solid reasons why it needs to be discovered by a younger generation as well. Leona Yarbrough’s is truly an American restaurant, much more so than the fancy, expensive, and haughty Crown Center place that calls itself The American. When this unpretentious relic is gone, there will not be another one like it.

For more than half a century (and longer, if you count all those years the now-retired Leona Yarbrough worked for her predecessor, restaurateur Ann Peterson), the format has been the same: Customers sit down at a table, look at the simple menu with its list of daily specials, and fill out their own order with a little pad and pencil. A complete dinner, including a starter, a salad, an entree, two vegetables, dessert, and a beverage, is rarely priced over $13. And that includes a fluffy dinner roll and a tiny, yeasty cinnamon roll.

It’s not great food, but it is the kind beloved by America’s first restaurant critic, Duncan Hines (yes, there was a man — a regular Joe, not a cook — long before the cake mixes). During the Depression, Hines worked as a salesman, traveling around the country and stopping in so many family-owned restaurants and diners that he compiled a little booklet for his friends. Over the years, Adventures in Good Eating became a best-selling guide. By Hines’ standards, Leona Yarbrough’s is not only as all-American as the lattice-crust apple pie on its dessert menu but also one of the last outposts of plain American cooking in Kansas City.

For some, plain food is a nasty holdover from those dull, sensuality-hating Puritans who landed at Plymouth Rock and hosted, according to legend, the first Thanksgiving banquet. But there are times when the stuff we now call “comfort food” — good-tasting, fattening dinners, such as fried chicken, grilled steaks, sugar-cured ham — is more effective than any antidepressant. And though I didn’t have the kind of white-haired grandmother who cooked homemade chicken-noodle soup, it’s grandma-style food all the time at Leona Yarbrough’s.

The place won’t win any awards for its service or its decor. In the past few years, it moved from the cozy Fairway location to a former Red Lobster building on the frontage road parallel to Shawnee Mission Parkway, just a cinnamon roll’s toss from a funeral home. The walls are hung with paintings by a local artist (including an oil portrait of Jacqueline Kennedy Onassis), and throughout one Friday-night dinner, a TV blasted (for the hard of hearing, perhaps?) over in the L-shaped corner reserved for smokers.

“What fun,” my friend Elizabeth said. She was nursing a glass of chardonnay and a cigarette as she looked up at the TV screen, where the characters on Cops were taking down a tattooed drunk driver. “It’s like dinner theater.”

Elizabeth, a forty-something radio executive, thought the idea of filling out her own order pad was “quaint” and, after waffling over the salmon, a plate of scallops and shrimp, and an aged beef filet, finally chose the steak. I decided to have the broiled red salmon with the homemade dill sauce. It took 10 more minutes of debate to decide which side dishes and desserts we would share, but we finally finished writing down our order in time for our waitress to walk by and snap it up without looking at us. In fact, she looked at us only once during the entire meal, when Elizabeth noted how delicious the steak was. “Yeah, it looked really good,” the server said, dropping off our desserts and disappearing forever.

Elizabeth was less enchanted by the baked potato and peas on her plate. “For one thing, the menu listed creamed peas and onions,” she griped. “These are just heated-up frozen peas. The potato is so overcooked, it’s inedible. And there’s no butter with the rolls.”

I was much happier with the whipped potatoes and the green beans that arrived with my hearty portion of salmon, which was a shade dry but tasty. I did stop a server to ask for butter, and she brought over a china bowl filled with little packages of Promise, that 50-percent vegetable-oil spread. Elizabeth just gave it a dirty look and ate her roll plain. Very plain. “The only thing that stuff promises,” she sniffed, “is an awful aftertaste.”

The desserts we ordered — a boysenberry shortcake with whipped cream and lemon meringue pie — made up for her disappointment. There was real shortcake underneath the boysenberries, and the lemon pie was tart and fresh-tasting, with a gloriously flaky crust and a swath of creamy meringue on top.

A few days later, I returned with Bob for an early Sunday supper. When we ordered soups as “starters” (instead of tiny glasses of cranberry juice or little dishes of fruit cocktail), the chicken noodle came loaded with fat, homemade egg noodles, and the navy-bean soup tasted, as Bob put it, “exactly like my grandmother’s.”

By 3 p.m., the braised lamb shank with mint jelly had been crossed off the special sheet, but the menu also boasted baked ham, roast beef, and salmon. Although Bob gave the moist and tender fried chicken high marks, I was less than overwhelmed by the baked Deluxe Chicken, an oddly flavorless, pounded breast rolled in sour cream and crushed cheese crackers.

And it was a good thing we didn’t try to order the gooseberry pie, devil’s food cake, or apple pie — they were already sold out, too. I could have had a sugar-free apple cobbler, an apple crisp, or pumpkin pie, served in tiny bowls or petite wedges, but I opted for another slice of that lemon meringue pie instead.

We were the youngest people, by several decades, in the dining room — a fact that I liked very much because it’s rare that I feel like a kid in a restaurant anymore. In fact, there was a children’s menu, but I didn’t want to push my luck. It was one thing to be sitting across from a couple who had voted for Roosevelt but quite another to try to pass myself off as 8 years old, even if I didn’t eat my green beans.