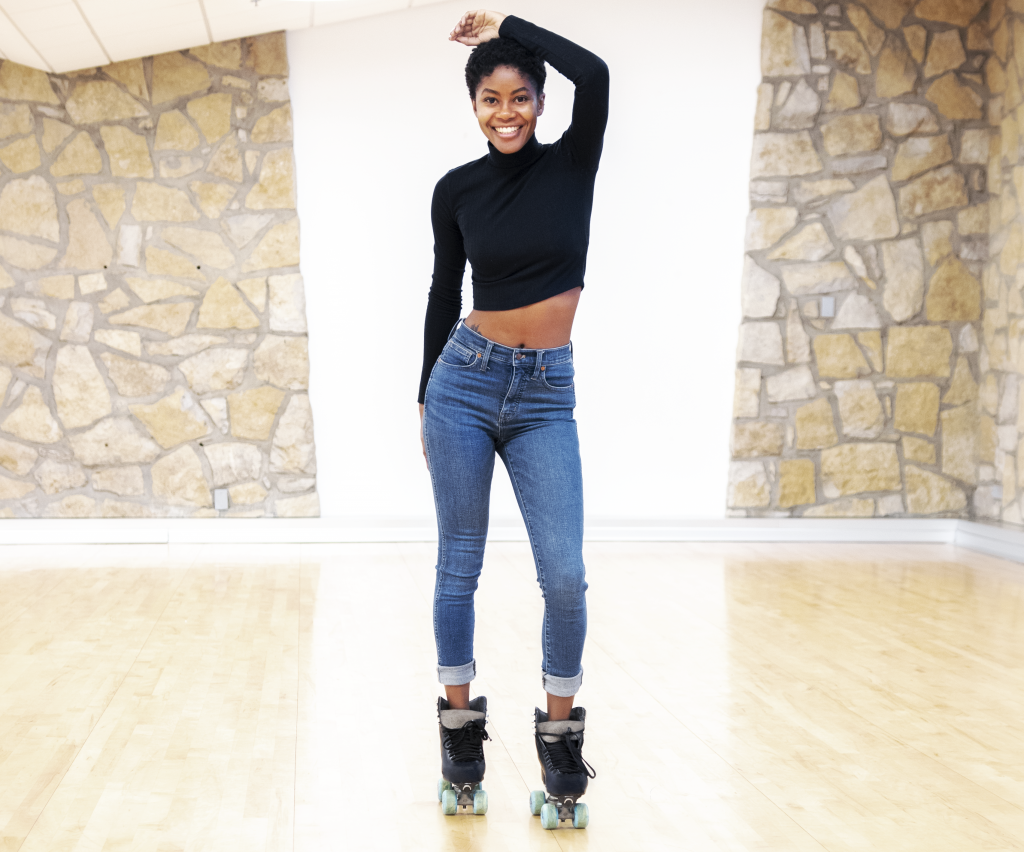 Dancing is cool, but have you tried jamming on wheels? The gift that only a few achieve was used by Amber Bolton to jump-start her groovy career.

“I was inspired by an inline skater on YouTube and overtime got into rhythm skating,” says Bolton. “I used to be the person that gave up all of the time, and I finally became someone who was consistent and actually trying.”

The rhythm queen wanted to share her skating experience on Instagram with friends and family. Between her swag, smooth moves, and charisma, she was able to earn millions of viewers.

Bolton started her journey in summer 2017, practicing some of the basics—such as backward skating and crossovers—that she had seen on YouTube, which she recalls as an inadequate amount of virtual roller skate guidance.

Rhythm skating is an artistic form of expression, a collection of dance styles, regional identities, and techniques used to move with the flow of the beat. Rhythm skaters use quad roller skates (four wheels on each skate) and include multiple styles such as Cali style, ATL style, and Chicago style to name a few.

Think of it as a fast paced dance skating—balancing on one or both feet, moving your hips, arm, and hands—all while remaining on tempo.

“When I started, there wasn’t as much content as there is now for skating tutorials online. So, I had to develop my own style,” Bolton says. “When I moved back to Kansas City, I started going to the outdoor skatepark.”

Bolton was a college graduate from Kansas State University who had an interest in mind and a lot of time to put forth the effort. She executed her idea by grabbing the antique skates she was gifted years prior and began practicing for hours at a time to perfect her craft.

Roller skating at skateparks—with skateboarders—wasn’t as popular as it is today. The bmxers often wondered if Bolton had made a wrong turn to get to her destination.

As she consistently went to Schweitzer Park, the kick flippers became more welcoming. She had marked her territory. This wasn’t a fad for Bolton, and she wanted to create a space that was safe for her.

“Once I started going to the park more often, the skateboarders were really accepting,” Bolton says. “I wasn’t sure if they were going to like me roller skating, but they were really cool, with good vibes. They made me feel welcomed.”

While progressing in her journey, Bolton was introduced to rink skating, which included a combination of jam skating styles. She decided to give the rhythm world a try and quickly gained a passion for it.

Soon enough, she progressed to become as smooth as the OG skaters of the rink with her seamless transitions and clean technique.

“I decided to go to Winnwood to learn more about the roller rink culture. There’s just so much to be taught with a lot of technicalities,” Bolton says. “It was an experience. I learned more about myself, who I was, and how to grow.”

Bolton started to notice the sudden rise in skating, pre-pandemic. Her reward grew bigger every time she posted about skating. Bolton realized her skill became an internet sensation.

It all began with a Reddit repost of her vibing near a lake. The video consisted of Bolton’s graceful strut to some melodic R&B ambiance. That video alone received thousands of upvotes.

Viewers were impressed and in awe of her abilities to groove on the concrete so effortlessly. Bolton was shocked her video received so much attention.

The surging interest in skating grew during 2020 quarantine, which a colossal amount adopted as a hobby. Skates sold out everywhere with shipping estimates requiring buyers  to wait up to six months.

“I was excited to share my creativity and content with others,” Bolton says. “Being a part of the skate community is important to me. When I saw the growth of the community, I felt like I was a part of a moving force.”

Bolton used skating as an escape. She had been suffering from anxiety and needed something to help her clear her mind. Her remedy had an impact, so she used her platform to help others.

Her contribution not only inspired Kansas Citians to participate, but it convinced viewers around the world to make their first skate purchase. Her views started to skyrocket, and her comments were flooded with interested followers.

After being featured on countless social media platforms, her views went from thousands to millions. She was influential, and her followers reacted enthusiastically to every video she uploaded.

From getting reposts on Vogue’s certified Instagram account to being shared on Instagram’s official page (with over 450 million followers), she grew a supportive fan base. Even celebrities such as Taraji P. Henson chimed in to share her fascinating dance moves.

“Roller-skating is important to me because it’s a hobby that relieves my stress, allows me to express myself, and remain active,” says AJ. “Skating made me feel free in a way. My anxiety wasn’t as much of an issue, and my confidence grew over time, in and out of my skates.”

The roll bouncer wanted to give back to the community that helped her. By doing so, she hosted her first workshop on her birthday in 2021.

“On Amber’s birthday, she invited us to her first skate workshop with a warm welcome. I learned some great techniques both in groups and individually. I even learned to skate backward,” says participant Ashley Epperson.

After receiving great feedback, she ventured to host more events. Bolton set the tone to make every workshop better than the last.

“Amber has been a great influence on the skate community. She is every bit of talented that I wish to be one day,” says skater Allison Joiner. “She does an amazing job with park skating and jam skating. I think the classes she teaches are amazing.”

Roller skating can seem intimidating at first, but once you get into the rhythm, you won’t want to stop. It not only changes people’s lives—it adds value.

Bolton has been an advocate for mental health by sharing her experience with social anxiety. She learned to separate herself from the internet when necessary and picked up on other hobbies such as pole dancing.

She’s inspiring many to start their skating journey. From social influencing, to being sponsored by Riedell, to premiering in commercials, and traaveling as a pro skater—Bolton has become every roller skater’s goal.

You can sign up for skate lessons and courses with Amber Bolton here.