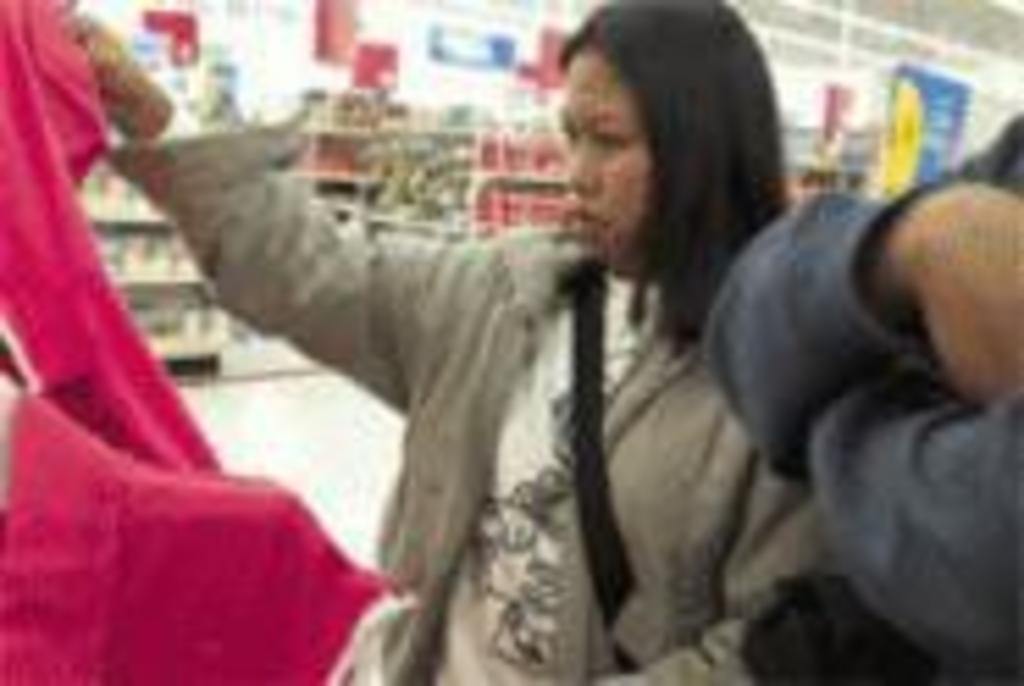 Wal-Mart obviously knew how to make its managers feel at home this past weekend when they gathered for their annual meeting in Kansas City. The second floor of Bartle Hall had been transformed to look like the inside of a Wal-Mart, complete with yellow smiley-face signs. Aisles held everything from toiletries to TVs. On gym-style bleachers in the center of the massive exhibition hall, lieutenants of the Wal-Mart army listened to spiels from their corporate bosses. “Always low prices,” signs reminded them from every angle. “Always.”

Meanwhile, across town, two women walked through the automatic doors of a Wal-Mart in Overland Park and headed for the women’s clothing section, looking for reminders of home.

Flory Arevalo found hers quickly. She rubbed the ribbed cotton fabric of a short-sleeved baby-blue blouse. She turned the price tag around, and her eyes widened. Seven dollars and 43 cents. She stared at it for a while. Her mouth moved a couple of times wordlessly before she got anything out. “This is so sad,” she whispered. “This is so expensive for us.”

Days earlier, 37-year-old Arevalo was working in a Filipino factory, making $3 a day to produce the blouses. Last week, the Washington, D.C.-based International Labor Rights Fund brought Arevalo, along with Nicaraguan factory worker Damaris Meza, to the United States to speak at rallies and church services across the country; this was their second city on the 13-stop tour. On January 28, they gave speeches and answered questions for 100 or so people who were attending the Rollback Wal-Mart Conference at the University of Missouri-Kansas City.

Organized by labor groups, the Rollback Wal-Mart Conference included Saturday-afternoon workshops with titles such as “Taking the ‘Wal-Mart Is Not Cool’ Message to Youth” and “Would Jesus Shop at Wal-Mart? Talking to People of Faith.”

The conference message wasn’t that people should stop going to Wal-Mart. “People always ask me where I should shop,” David Nassar of Wal-Mart Watch, the most outspoken critic of the retail giant, told the group gathered in UMKC’s Pierson Hall. “Unfortunately, we don’t have a good answer for that right now.” Instead, Wal-Mart will stop buying from factories that mistreat workers if their customers put pressure on them to do so, Nassar said.

Kansas City is a likely place for an anti-Wal-Mart confab. Every year, the corner of downtown between Bartle Hall and the Marriott crawls with about 6,100 casually dressed managers wearing Wal-Mart name tags. According to the Kansas City Convention & Visitors Association, the conference contributes an estimated $5.9 million to the local economy. Wal-Mart pays the city about $800,000 for use of Bartle Hall, internal city documents show. But nobody outside the company knows exactly what happens inside Bartle Hall. Wal-Mart spokesman Kevin Thornton declined to comment on event activities.

Instead, he e-mailed a statement to the Pitch that boasted of Wal-Mart’s role in creating 125,000 U.S. jobs last year. The e-mail also criticized the counter-rally at UMKC. “America’s working families have to be wondering why union leaders are spending member dues on a conference in Kansas City attacking a company where union members shop to save time and money,” Thornton wrote. “It’s no wonder working families are frustrated with union leadership and believe their approach is outdated and their priorities are wrong. Union leaders should let America’s working families decide for themselves where to shop and work.”

But workers already had a shopping trip planned. During the first smoke break at their own conference, two International Labor Rights Fund employees drove the two Filipino and Nicaraguan factory workers to Wal-Mart to look for the stuff they had made. The women’s clothing section was right in front of them when they walked past their first Wal-Mart greeter.

While Meza, the 28-year-old worker from Nicaragua, searched the store for jeans, she explained that the managers at her factory refuse to issue gloves to protect workers from the shears they use to trim fabric. Workers, who make about $9 for a 70-hour week, often cut their hands and splatter blood on their work. It’s Meza’s job to inspect the pants and send them to the wash if they’re stained with blood.

Meza said managers at her factory won’t let workers take drinks of water because doing so could increase the number of trips to the bathroom. It’s the same story at Arevalo’s factory south of Manila. A sign she said she had stolen off the wall there read: “1-19-06 NOBODY IS ALLOWED TO GET WATER DURING WORKING TIME.”

Meza finally spotted a familiar pair of jeans. They were plus-sized, with an elastic waist, just like the ones she makes. But then she noticed the end of the pant leg. “No capri,” she said. These, she said, were made at another factory. She headed off in search of hers.

Nearby, Arevalo introduced herself to a shopper whose cart overflowed with clothes. The shopper had been cornered by Trina Tocco, a program assistant with the International Labor Rights Fund and a chaperone for the two factory workers. Tocco imports a new group of overseas workers every few weeks for trips just like this. Every time, she buttonholes Wal-Mart shoppers. She takes pride in the fact that many of them have put items back on the shelves after meeting the workers who made them.

“We have workers here who produced these clothes,” Tocco told the Overland Park shopper.

“Did you know they would have to work for a week to buy these clothes?”

“No, I didn’t know,” the shopper said, looking surprised.

“Did you know we could double their wages if this shirt was just $1 more? Would you be willing to pay that?”

This went on for a while, until the woman wheeled her cart to a register. It wasn’t that she didn’t agree but that there are few alternatives to Wal-Mart. Boutiques that hawk sweat-shop-free clothing simply can’t compete with Wal-Mart’s deep discounts.

Meza spotted a rack of stretch-waist capris with “Hecho en Nicaragua” on their tags. She recognized them immediately as products of her factory. She inspected the fabric, as if looking for bloodstains missed in the wash. They cost $14.75 — about 11 days’ wages for Meza, who makes $9 a week.

The two workers wandered around for a while. They didn’t want to leave. They checked more price tags. They inspected where shirts and socks and pants had been made. But mostly they just stared at the stuff. Their initial disbelief over what seemed to them to be high prices turned into what looked like despondence. Their life’s work had been reduced to a rack of clothes in a suburban discount store.

One of Tocco’s co-workers bought the blouse and a pair of capris for the women. They’ll use them as displays for their speeches. Then they’ll take them back home and show factory workers the price tags. The hope is that if workers know what Wal-Mart charges for clothes that cost less than 10 cents to make, they will demand better pay.

Already, factory workers in Nicaragua and the Philippines are trying to unionize. About a year ago, during the midst of negotiations between workers and managers, Arevalo says a Wal-Mart employee showed up to give the workers a warning. “If you don’t give up this campaign for a union, then Wal-Mart will withdraw its order from the factory,” Arevalo says the man told the union leaders. The union’s activities cooled, and conditions in the factory have remained the same.

Walking out of the store with her first-ever Wal-Mart bag, Arevalo said, “We do not have the right in my country to buy things like this.”

At the end of their Wal-Mart tour, the group realized they might have missed the free lunch provided at the conference. They’re on a tight budget, so they bought two boxes of granola bars before leaving Wal-Mart.