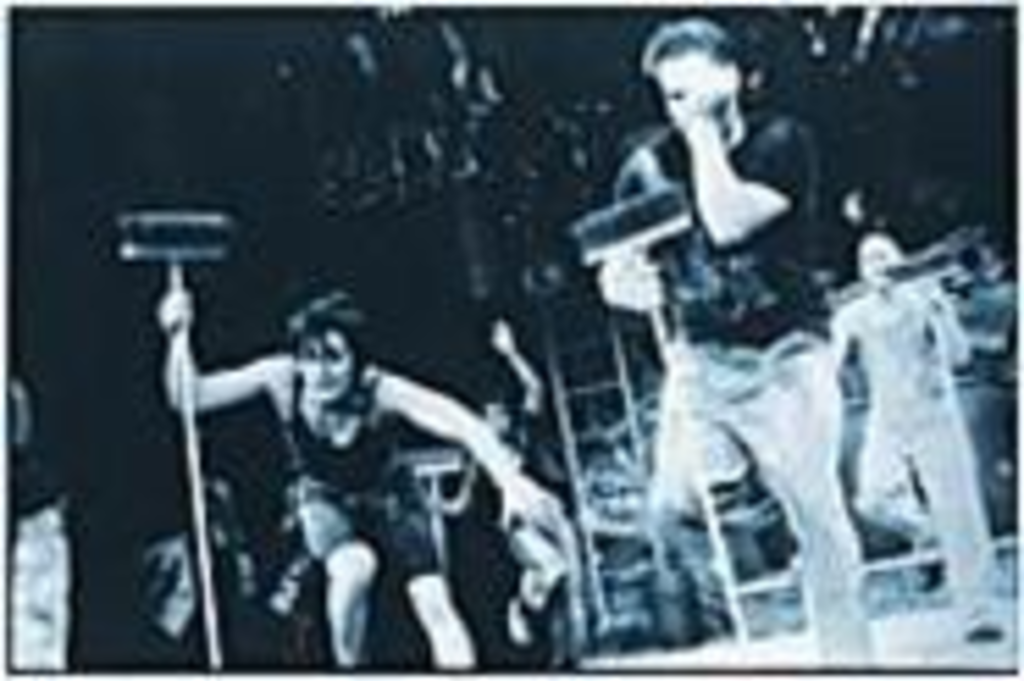 Cameron Newlin is sleepy, and his hotel room provides solace for a lazy morning. This 27-year-old Cedar Rapids, Iowa, native owes his exhaustion to the previous night’s performance, during which he left his soul on the stage in a flourish of rhythmic noise, using various objects and his own body to pound out furious rhythms. Stomp, which contains no speech, dialogue or plot, emphasizes movement and banging, and Newlin has performed more than 1,300 times since joining the production in 1997. The rigorous physical requirements of the program, as well as the less tangible draining effects of constant touring, ensure that Newlin spends most of his days resting and recuperating. “My main goal is to stay healthy,” he says, mere minutes after awakening from his midmorning slumber. “We swing brooms, trash-can lids and pipes around, so you can easily get hurt.”

This day, before opening night at Detroit’s Fisher Theater, affords Newlin less leisure time than usual. “The first day in a city is always the busiest,” he says. “The day can be long, but doing the show is a blast.” Seeing Stomp, which was born on the streets of Brighton, England, can also be an explosive experience for the uninitiated. “People who are used to traditional theater are always blown away,” Newlin says. “It’s completely rhythmical, energetic and fun.”

Newlin is not only a performer but also the show’s rehearsal director, a title he has held for the past year. To spectators, it might seem as if this distinction grants Newlin starring status, but he says he just plays the role of one of the creators of the show. “It looks like I’m the featured guy, but I don’t get paid any more than anybody else,” he says. Actually, his responsibilities are much less formal than the title suggests. “I’m more like a camp counselor and tour guide,” he corrects. “The actual title is pretty funny. We rehearse every day, and I really don’t direct the rehearsal.”

As odd as this title might seem, most Broadway artists in Newlin’s position answer to an even stranger job description: dance captain. “Nobody is going to dare call me that,” he says with a laugh. “Besides, I don’t know what the hell a dance captain is.”

Newlin probably never told anyone he wanted to be a rehearsal director or dance captain when he grew up, but he’s always known that he wanted to be a drummer. He started playing at age 8, and like most budding percussionists raised on rock, he dreamed of banging on a twenty-piece drumset in front of thousands of screaming fans at a huge arena.

“I grew up listening to the Police, Rush and Led Zeppelin. Stewart Copeland, Neil Peart and John Bonham were great, but I never really idolized anyone,” Newlin says before quickly adding a disclaimer. “I thought Peart was God for the majority of my younger life. I was too young to realize that he was just a guy who played the drums really fast, really well and had a lot of toys.”

Though he admits to finding Peart’s style impossible to copy, Newlin did his best to follow in the Rush drummer’s footsteps, playing in “rock bands galore” during his teen and college years. He landed a drum scholarship at the University of Nevada in Reno but soon moved to San Diego to pursue a career in the thriving Southern California music scene.

“I was too scared of L.A., so I thought I could be a rock star in San Diego because it was smaller, cleaner and nicer,” Newlin says. “I just played for fun, a little money and the hopes of getting a band going. I worked and went to school during the day and played at night.” In 1997, Newlin’s career changed directions; he came across a classified ad in the Los Angeles Times that read “Stomp is looking for dancers who have rhythm and drummers who can move.” “All of my friends kept telling me I should be in Stomp, but I didn’t know what the hell it was when I was in San Diego, and I never pictured myself being in a Broadway or off-Broadway production,” Newlin recalls. Nonetheless, he headed out to participate in the open call, with a Coca-Cola commercial that featured several cast members serving as his only introduction to the production for which he was auditioning.

“There were more than 2,000 people in line,” Newlin recalls. “Half were Broadway professionals, and the other half were professional drummers.” As he nervously awaited his first professional audition, a woman next to him, who had just gotten off the road with Cats, kicked her leg over her head. Newlin shrugged off the intimidating nature of the process, as well as his slight hangover, to perform well enough to earn a part in the show. The choreography presented Newlin with his biggest challenge. “I’m not going to move like the guy next to me who is a hip-hop dancer,” he admits. “I move in my own way.”

Newlin plans to move on in July, with renewed hopes of maintaining a career in rock. With all of his stage experience, Newlin no longer finds L.A. so frightening. And after playing everything from trash-can lids to broomsticks in search of a beat, playing a mere set of drums should seem as relaxing as a daytime nap.