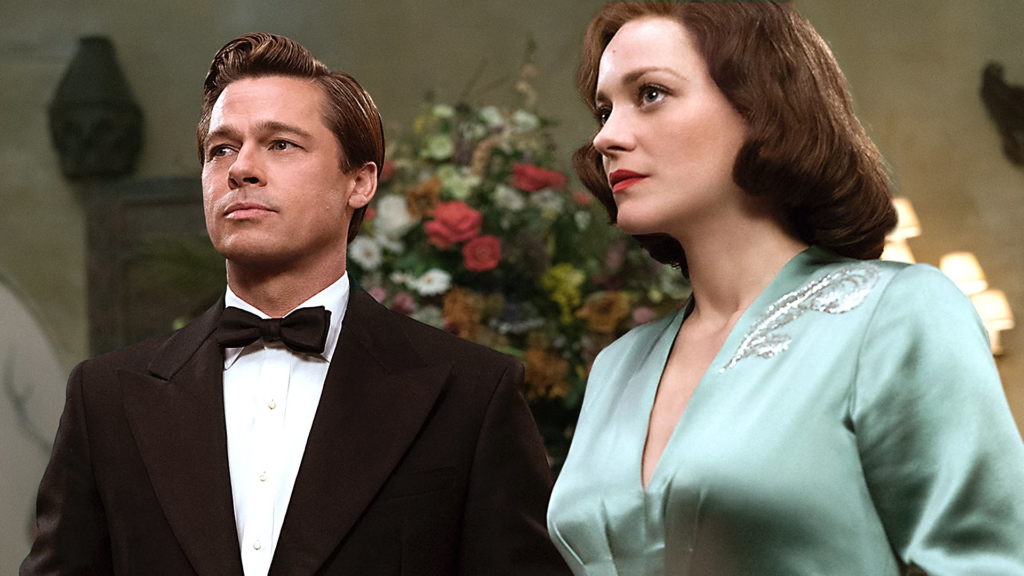 Intelligence officer Max Vartan (Brad Pitt) has been informed that his wife, former French resistance fighter Marianne Beausejour (Marion Cotillard), is a Nazi spy, but he doesn’t believe it. He’s been told not to investigate the matter on his own, but he asks a first-time pilot flying over enemy lines to contact a man on the other side to prove his wife’s innocence. The kid is scared, the mission is strictly off the books, and the stakes couldn’t be higher. Max hands him a picture of his wife, and the pilot asks how to identify the man.

It should be noted that the new World War II action-romance Allied is not, in fact, a comedy. This is just one of several unintentionally funny moments in a movie that wants to be taken seriously but is derailed by listless direction, tired acting and a corny script.

With its spy-versus-spy spouses, Allied must have felt to everyone involved like a worthy bookend to Mr. and Mrs. Smith, the fiery and fun 2005 action-romance in which Pitt co-starred with eventual ex-wife Angelina Jolie. But sparks need to fly in order for a romance to work, and no matter how hard Cotillard tries to compensate for Pitt’s somnambulistic performance, Allied remains bereft of energy and devoid of sensuality. We spend time with the couple in French Morocco, but a romance this tepid should never try to invoke Casablanca. That classic is full of simmering desire, unspoken yearning and multiple layers of drama — three things conspicuously absent from Allied.

Instead, we get a play-it-safe thriller with a plot that recalls that of Alfred Hitchcock’s Notorious and Suspicion yet fails to muster a fraction of either’s suspense. Steven Knight’s screenplay is loosely based on a story about a World War II spy couple, told to him many years ago and supposedly true. The script as filmed, however, is maladroit Hollywood fantasy, a convoluted mess that talks down to you every step of the way.

Given its star power and the fact that the director is Robert Zemeckis, the studio-trusted helmer of Forrest Gump and Cast Away, Allied should at least look impressively slick, even if it’s empty. But Zemeckis relies way too much on computer-generated effects and backgrounds. One particularly distracting scene has Marianne giving birth outside a London hospital during a Luftwaffe bombing blitz. The moment is supposed to crackle with danger, but the fuzzy cinematography and unconvincing effects disorient rather than dazzle.

Cotillard seems right at home and does her best to elevate the material, but her character as written is all over the place — and it’s more than a side effect of her possibly duplicitous nature. Pitt, on the other hand, is underacting. It’s possible that such a choice was intended to show confidence, but it comes across as indifference, even when the script requires him to be passionate. Pitt never finds a footing for Max, and the script consistently slips its gears, exacerbating the situation to sometimes comical effect. (One misguided scene, with Matthew Goode as a veteran who has knowledge that’s crucial to Max, is particularly laughable, right when the movie needs to be dead serious.)

Allied marks an enormous missed opportunity to re-create the glamour of old Hollywood. From the late-night rooftop scenes in Casablanca that are supposed to conjure tenderness, to the sandstorm make-out session in a car that’s supposed to arouse, Zemeckis proves that the best costumes and all the technology in the world can’t substitute for old-fashioned storytelling.