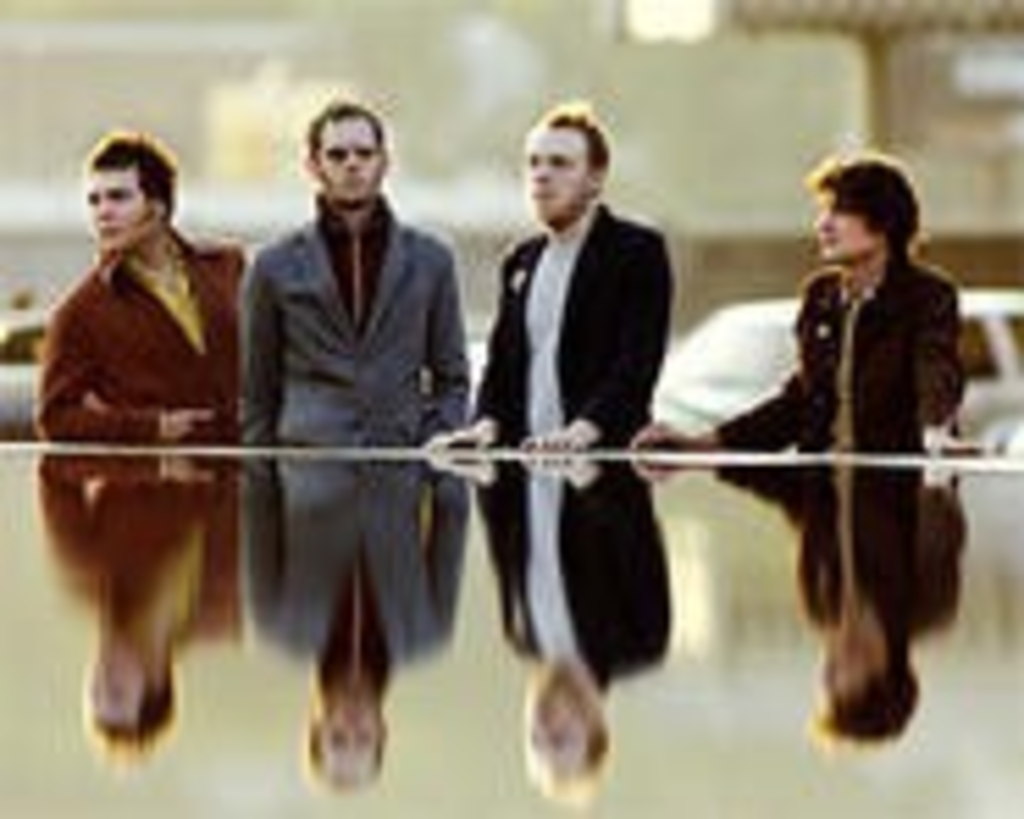 In the beginning, there was the People. Two teenage cousins, actually. During family gatherings, drummer Ryan Shank and singer-guitarist Ben Grimes talked music and jammed. In 1998, they decided to take it to the next level.

“I was weeks away from starting film school,” Grimes says. “Before classes started, I canceled, got a refund and started my band.”

At the time, Grimes was in Kansas City and Shank lived in Carthage, Missouri. The two took up digs in an unlikely locale to grow their rock-and-roll legs: Springfield, Missouri.

In the fall of 2001, they solidified their lineup with bassist Harry Anderson, of Lawrence’s Reflector, and Kenn Jankowski on guitar and keyboards.

Relocating to KC, the foursome attracted a substantial following without really releasing any material on disc. The People’s energetic, charming stage presence captivated younger audiences, and its indie rock, mixed with heavy nods to ’70s favorites such as T. Rex and David Bowie, appealed to older, discerning hipsters.

Listen to “Great Communication” by the Golden Republic, from the People EP:

Little did the band members know that they’d become one of the first local acts since the Get Up Kids to ink an impressive record deal.

Ben Weber, who represented Lawrence’s Ultimate Fakebook, expressed interest in the People and wanted to introduce the band to Astralwerks’ honchos Glenn Medlinger and Errol Kolosine. In late 2002, Weber set up a showcase at Lawrence’s 8th Street Taproom, inviting Medlinger and Kolosine from New York. Catchy numbers such as the frenetic “Robots” and the slinky “She’s So Cold” impressed the label heads, and the boys were signed.

Astralwerks seemed an unlikely home for the rockers, but the label, which records high-profile, mostly electronic acts such as Air and the Chemical Brothers, was looking to diversify its roster.

“They [Astralwerks] told us we were going to be the flagship band for their new direction,” Anderson says. “But we weren’t good enough to be anyone’s flagship band. We weren’t ready.”

Regardless, the People headed to Bridgeport, Connecticut, in the fall of 2003 to record its inaugural release with producer Peter Katis, who had just worked on Interpol’s Turn on the Bright Lights. The seven weeks of sessions at Katis’ Tarquin Studios was a maiden voyage for all four members. It also served as a harsh learning experience.

Instead of writing a new batch of tunes for the LP, “We sat on our old songs,” Anderson admits. It was that material that scored the deal, but not bringing anything fresh to the table weakened the band’s creative stamina.

Another problem: Katis had never seen the band live, which was such a vital element to the band’s dynamic.

“He [Katis] only had our demos to go on, which weren’t that good to begin with,” Anderson says. “The energy was lost. The music got polished down. He sanded it to a nub.”

Shank acknowledges that, though the band voiced complaints, “we were intimidated. We trusted them a little more than we should have.”

During the recording of the album, it was discovered that a band from the ’60s held the rights to the new group’s name. After months of waffling (during which fans were invited to come up with a new name), the People settled on the Golden Republic.

The band played a string of support tours with respected acts such as Sondre Lerche and Nada Surf. The Republic’s fantastic live performances gained fans in unfamiliar cities, but underneath the excitement was a sense of dread.

“The record label actually told us, ‘Be prepared — it [the album]’s not going to do well,'” Anderson recalls.

Unfortunately, Astralwerks’ prediction was dead-on. Preceded by The People EP (a recording that more effectively captured the band’s energy), the Republic’s self-titled LP was released in February 2005 to little fanfare, even locally.

“When we first got signed to Astralwerks, people in Kansas City paid attention to the label,” Anderson says. “Then the record came out, and it pretty much faded away.”

Shank adds, “It wasn’t an embarrassing record. It just wasn’t what we wanted.”

Grimes admits that the band should’ve played a bigger role in post-production. “There wasn’t clarity with the people working on it. What kind of record was it supposed to be? Well, it’s not quite indie rock, and it’s not quite Coldplay. Uh, OK, it’s … beige.”

Despite the disc’s unfavorable reviews, the Golden Republic’s live shows continued to draw new fans on the road with labelmates Graham Coxon (the former Blur guitarist) and the Caesars (the Swedish band whose single “Jerk It Out” dominated iPod ads in 2004).

Everyone is tight-lipped about specifics, but whatever happened led to Shank’s termination.

Shank offers: “When you’re on tour, everyone has to sacrifice certain comforts. When someone doesn’t, it starts to piss everyone off.”

“The band had become this machine that took a life form of its own,” Anderson says. “We didn’t make decisions based on compassion. We did what was best for the band.”

“When we had to kick Ryan out, it was really painful,” Grimes says. “I wish we would’ve had the foresight to split up then — that we knew that that was the way things were going to go.” (Since Shank’s exit in August 2005, the cousins and band founders have had little communication.)

In May 2006, the band readied for its first gigs in Europe that summer. After nine months with a new partner in the rhythm section, Anderson grew restless with the band’s direction. He also had a wife and his business, Anderson Electrical, to think about. After five years in the band, he left and was quickly replaced by John Eastlund (the Ssion).

Down to two original members, the reconfigured Republic toured Europe. Its overseas representation, an indie label called MVS Records, was eager for new material from the band. The encouragement lit a fire under the unprolific band (which had written only a few songs since the 2005 LP) to pen another album. Or so Jankowski thought.

“When we got back from Europe, no one wanted to write but me,” Jankowski says. “After that, I didn’t want to continue.” He now admits to having been too impatient, an attitude that drove him to quit mere weeks after the Republic’s return from Europe.

A loophole in its contract allowed the band to leave Astralwerks with no obligation to produce a second full-length. Grimes decided to forge ahead with Eastlund and Johnson under the name Soft Reeds, and Jankowski was free to fully commit to his new band, the Republic Tigers.

Aside from a contribution to the upcoming, all-local Oxblood Records compilation, the Republic has been overthrown.

But not without one last shout. Friday night’s farewell show is especially bittersweet because Shank and Grimes, the cousins who started the band that took them so far, have put their bad feelings aside to play together one last time, with Anderson back on bass.

At a practice session this past Monday night, the original Golden Republic played together for the first time in more than a year. Eastlund and Johnson sat in the basement of their house, watching from the sidelines as Anderson and Shank resumed their places in the rhythm section. After a few false starts, the bandmates scoffed at their rustiness.

Shank said, “Let’s do ‘Great Communication.’ I’ve wanted to play that for a long time.”

The band nailed the infectious dance number, and everyone nodded in excited approval.