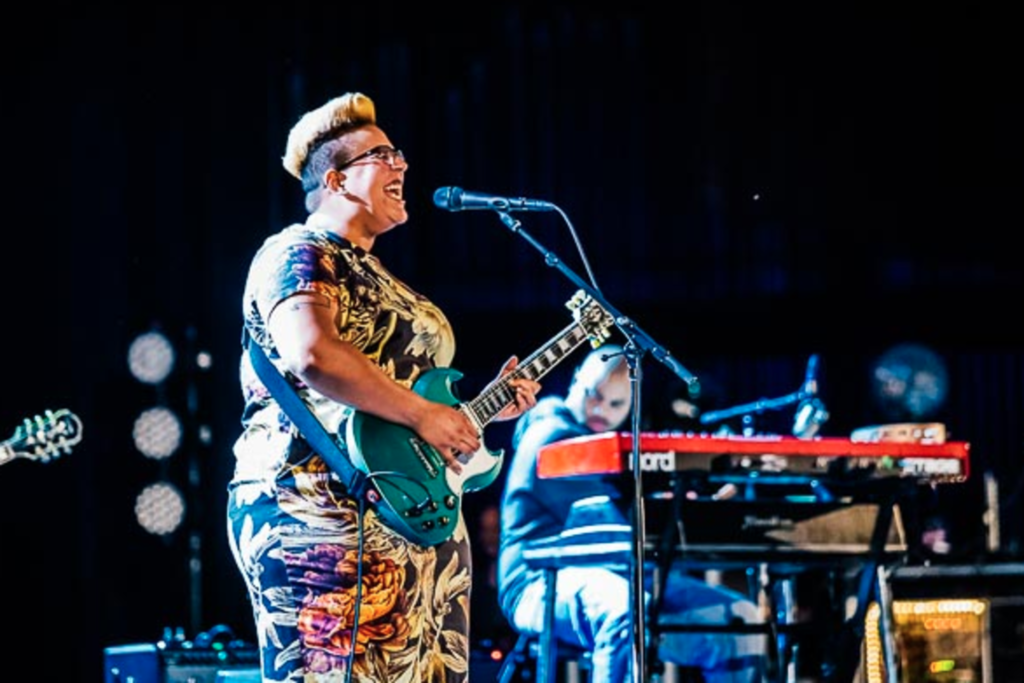 There wasn’t much of a crowd for Josh Tillman – who performs as Father John Misty – when he began his set last night, opening for Alabama Shakes at Starlight, and the people present were decidedly not his type: largely middle-agers on date night, blatantly ignoring his polite – but omnipresent – “No Photography” stage sign. 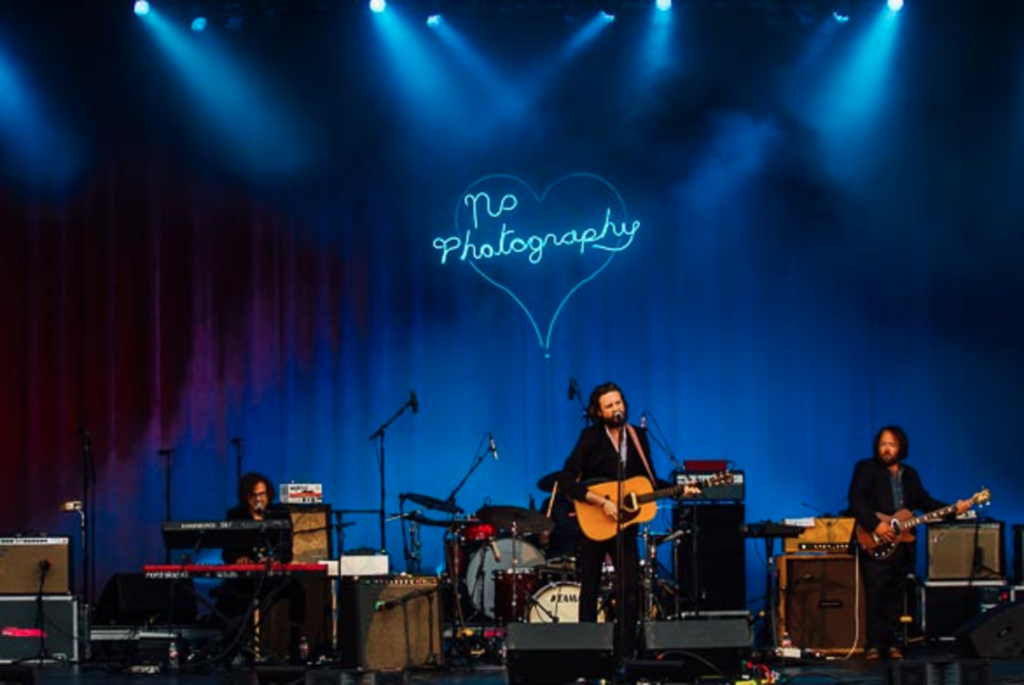 The cellphone thing is a sticking point for Tillman, and he did not take kindly to the concertgoers in the first few rows that proceeded to snap away at him as he strode down a stage ramp and sang his opening song, “I Love You, Honeybear,” from the pit. From my spot, I could see Tillman give one woman the finger as she took his picture; he took the phones of several others and deleted their photos, never missing a note.

Those familiar with Tillman’s act know this is not uncommon behavior, and hey, you know, he’s got a point. And he’s got a sign. But it was a little uncomfortable watching him school people so directly. Tillman, though, is all about directness. 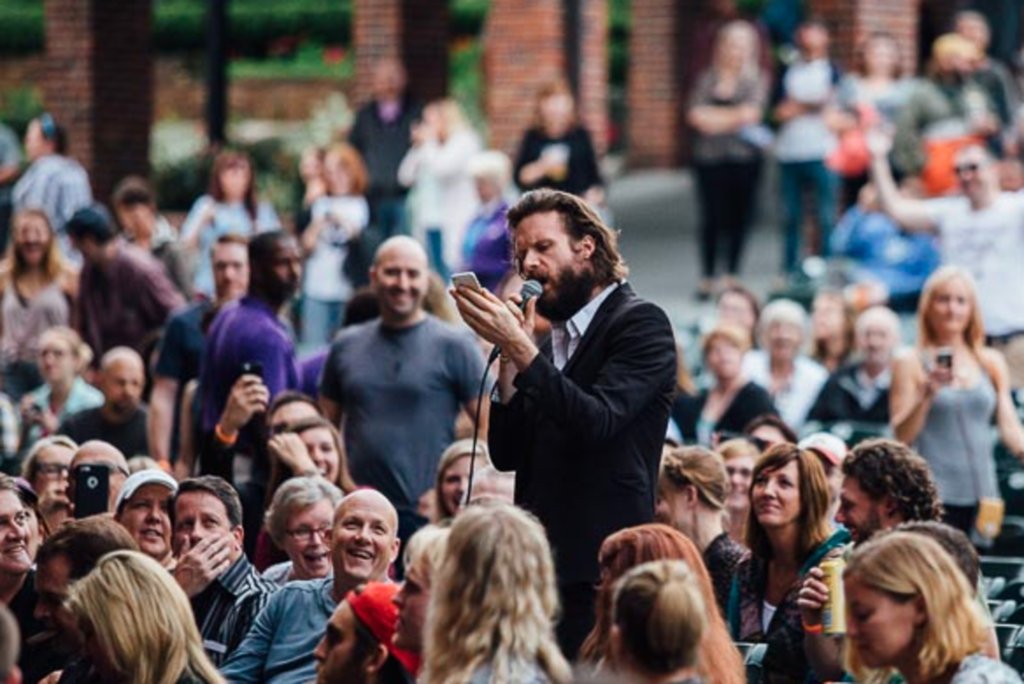 “All right, I’m here to warm you the fuck up,” Tillman announced after the first song. And he proceeded to deliver an hour-long set that did that, and then some. He swung his microphone stand around, jumped on the kick drum, fell to his knees and distorted his sinewy body however the song demanded.

Tillman’s magnificent voice is perfect for the Laurel Canyon-inspired folk-rock songs that fill his latest full-length, I Love You, Honeybear, but it is his lyrics that truly stun: “Bored in the U.S.A.” offers a searing social commentary; “True Affection” attacks the preoccupation with, yes, cellular devices.

But though Tillman delivered a truly stunning, impeccable performance, it took several songs to get the sparse crowd invested – something he seemed deeply perturbed by. After a few songs, he tried to push the crowd into responding to him.

“I haven’t had this many middle aged men look at me like this“ – Tillman made a bored, perplexed look, resting his face in his hand – “since I played fucking peewee baseball. What the fuck is wrong with you people? ‘Oh my God, he’s looking at me, he’s making eye contact. I’m so glad our son didn’t turn out this way.’” 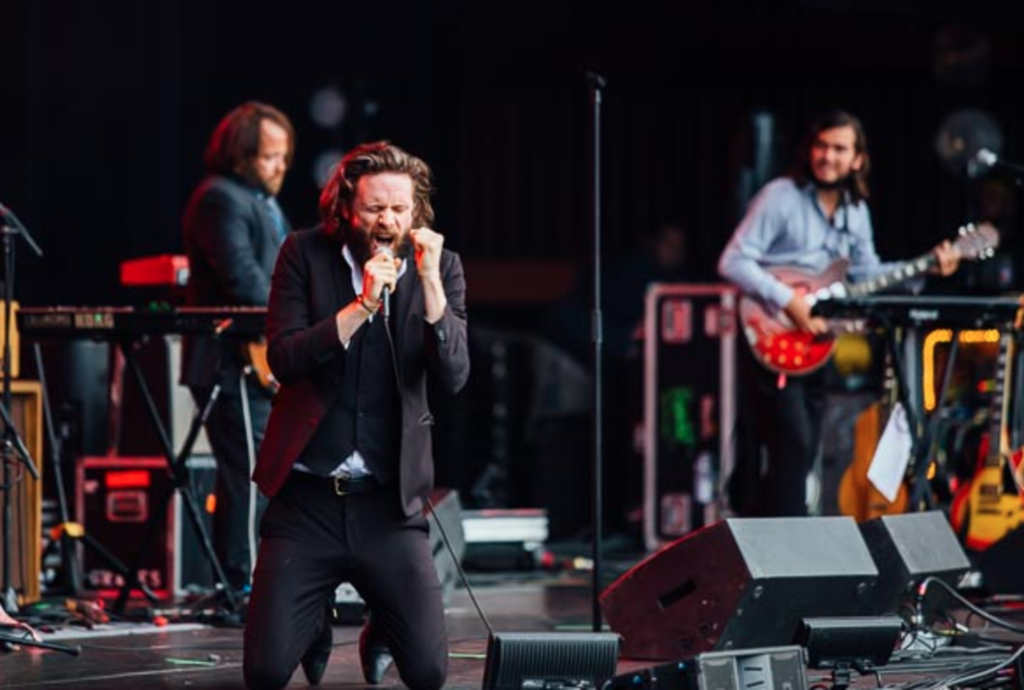 It was a too-true statement that got some laughs, and it did seem that a few in the audience sat up a little straighter. He even managed to get a few couples dancing in the aisles (until Starlight attendants shooed them back to their seats). By the end of “Nothing Good Ever Happens at the Goddamn Thirsty Crow,” he had won: People were cheering and standing up for him, and it wasn’t even dark yet.

“I’m so psyched to see the Alabama Shakes,” Tillman said before launching into his final song, “and I thank them for having me come and put on this demented minstrel show.” He ended his set with a mic drop, leaving a lot of confused audience members – and even a few moved ones.

By the time the Alabama Shakes took the stage, just after 9:30 p.m., Starlight had filled out to considerably. Frontwoman Brittany Howard gave a few little bows as she took her place in front of the microphone stand. This time, the audience needed no prompting: Concergoers were on their feet immediately, and they enthusiastically remained that way for the duration of the Shakes’ nearly 80-minute set.

It was hard not to notice the disparity between opener and headliner: Tillman, for all his cranky, caustic comments, was an engaging and acrobatic performer; Howard was all but stationary by comparison. But she had the love of the crowd regardless, thanks in part to her unmistakable, powerhouse vocals. She shrieked, she howled, she roared: Whatever Howard did, she sounded like liquid gold. 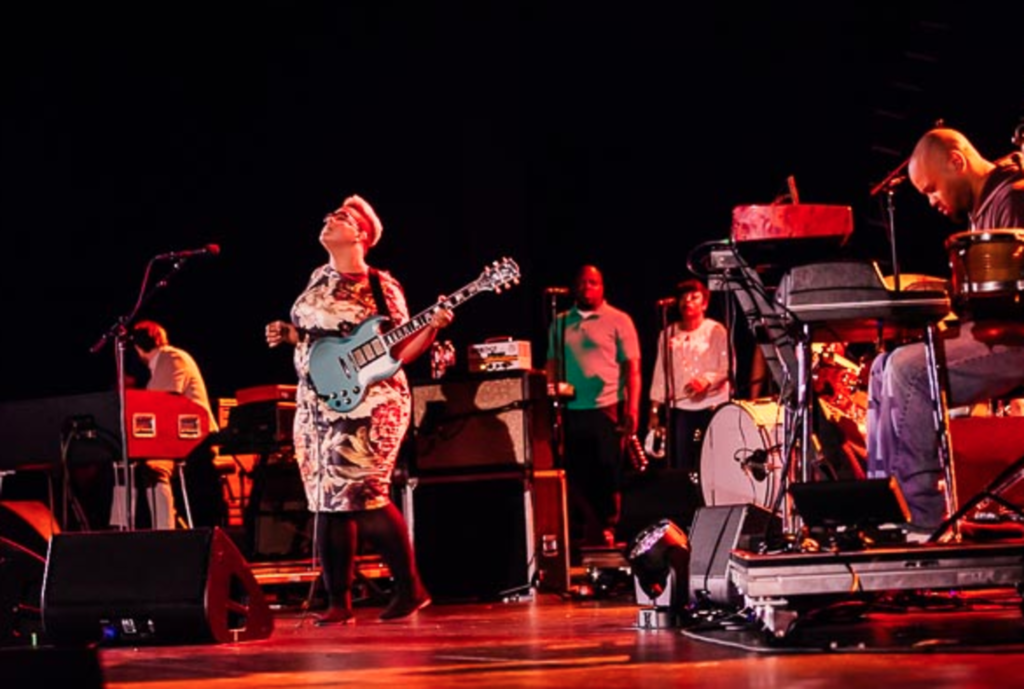 It was the songs off the Alabama Shakes’ 2012 debut, Boys & Girls, which got the best response. There was no stage décor, and the light show was minimal for the majority of the set; the focus instead was entirely on the loud, brash blues-rock that shot the band to stardom three years ago.

It’s worth noting that before the Athens, Alabama band was topping the charts and being nominated for Grammys, the Shakes cut its teeth doing rock and soul covers (do yourself a favor and YouTube their interpretation of Led Zeppelin). Rock and roll comes easily to this band, just as Howard’s impassioned howls seem to erupt effortlessly out of her.

What seem less natural to the Alabama Shakes are the more soulful, R&B-flavored songs off its April-released Sound & Color. On record, these songs work beautifully: The title track is smooth and sexy, Howard’s voice a tightly controlled instrument; “Dunes” is sweeping and spacey; “Guess Who” sees Howard cooing gently.

Live, though, it’s apparent that Howard is most comfortable when the volume is turned all the way up, and if we’re being honest, that’s when she sounds the best, too. This was most obvious during “Be Mine,” when Howard’s earth-shattering shriek was overpowered only by the roar of the audience as she turned the lyrics to concertgoers directly.

“Will you be mine?” She implored, to an enthusiastic response. “Well, all right then, be mine.” 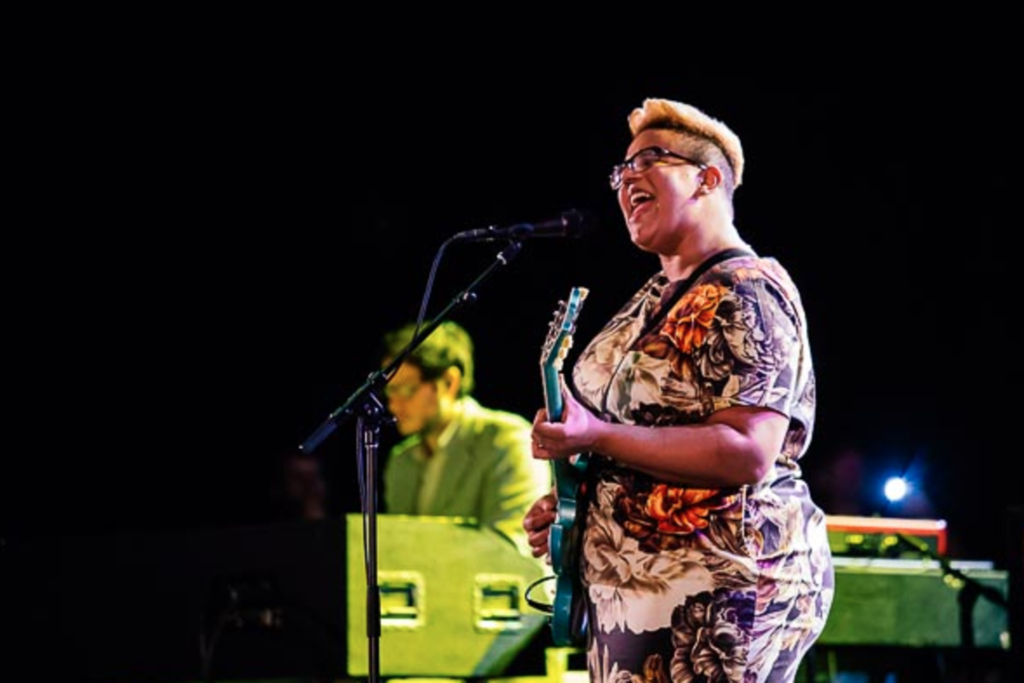 Other highlights included “Joe,” which Howard said was about “fostering a long-distance relationship.” There was a stirring moment as Howard’s lyrics – I’ve fulfilled a lot of wishes, seen my dreams come true – were met with loud cheers. It felt honest and celebratory. This emotion came once more when, before the band’s final encore song – an impressive, gut-wrenching delivery of “You’re Not Alone” – Howard addressed the audience.

“I keep saying thank you because that’s the way I feel,” she said, with more than a trace of humility. “I remember a time when nobody came to see us, nobody cared, and I appreciate it.” She paused briefly, looking out at the full crowd of over 4,500. “That’s the best I can do.”

Note: Setlists are approximate. Leave your corrections in the comments.

Father John Misty
I Love You, Honeybear
Strange Encounter
True Affection
Only Son of the Ladies’ Man
When You Are Smiling and Astride Me
I’m Writing a Novel
Chateau Lobby #4
Bored in the U.S.A.
Nothing Good Ever Happens at the Goddamn Thirsty Crow
Hollywood Forever Cemetery Sings
? Holy Shit ?

Alabama Shakes
?
Rise Up to the Sun
Always Alright
Shoegaze
Hang Loose
Miss You
Guess Who
I Found You
Gimme All Your Love
Be Mine
Joe
On Your Way
Don’t Wanna Fight
Sound and Color
Dunes
—
Over My Head
The Greatest
You Ain’t Alone