After two and a half years of work, Rebecca Koop’s mosaic mural is finished 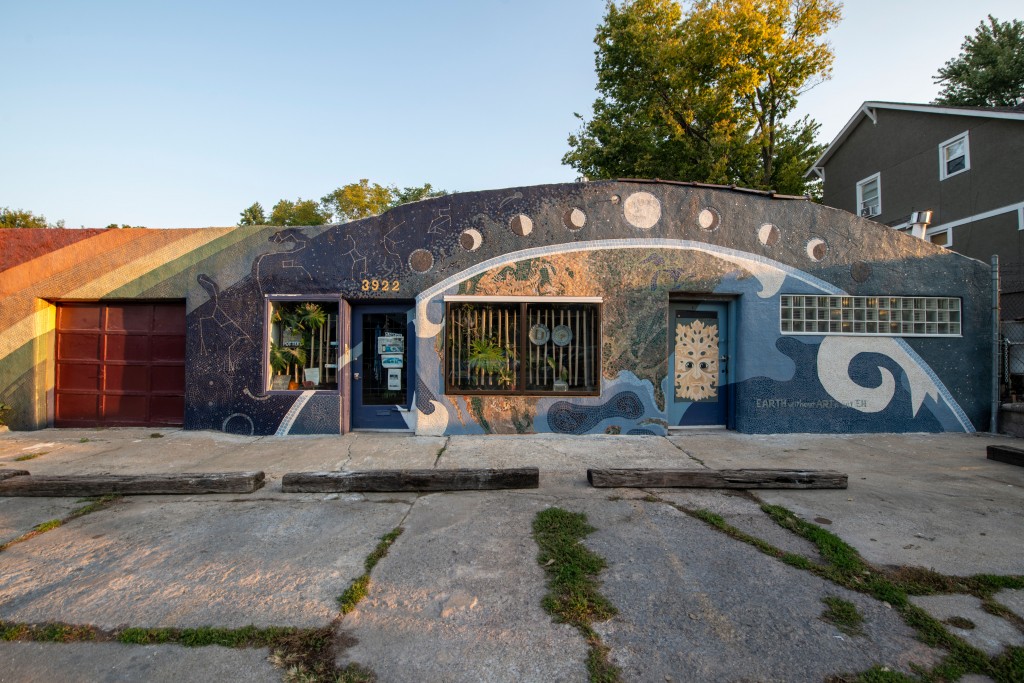 While many of us have purchased paint-by-numbers or adult coloring books to pass idle time, half-finished them, and then placed them in a closet to collect dust, Rebecca Koop completed a mosaic mural that covers over 460 square feet and took over five years to conceptualize, gather materials, and create.

Koop, a Northeast KC artist who graduated from the Kansas City Art Institute ceramics department in 1979, began her mural journey in 2005 by designing the mural layout (which she calls a “cartoon”) and scouting for various colors of tile at Habitat for Humanity Restore. Certain colors, as well as types, were difficult to get her hands on.

“Well now if I’m looking at Habitat Restore, all I can find is gray, white, and wood grain. That’s the style right now,” says Koop. “Everything is just kind of a blank slate. And being an artist, I don’t like working with dull palettes, I want some color in it. But after 2005, there were still a lot of blues, greens, oranges, different shades, some warm and cool colors – but, a specific type of tile.” 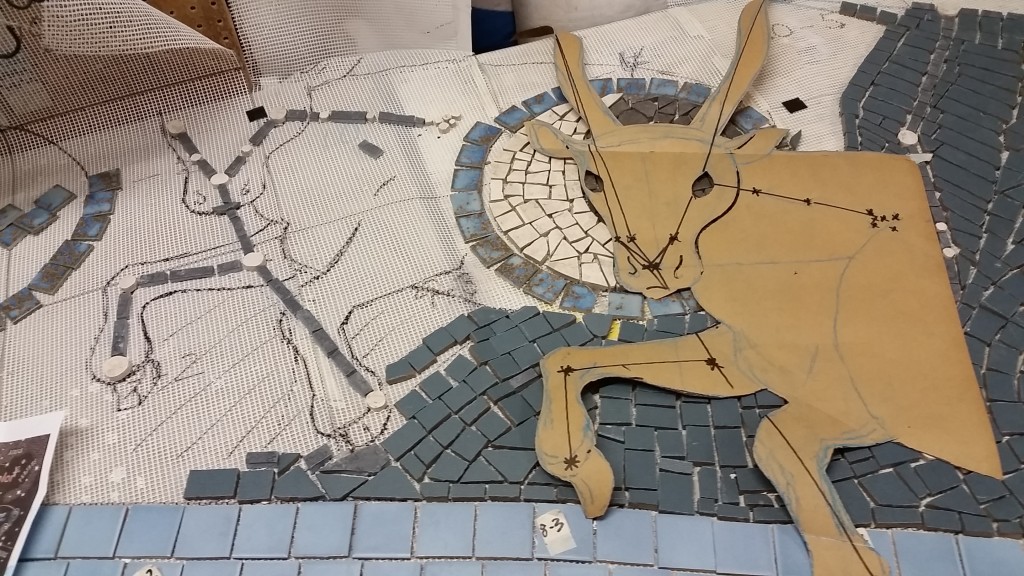 Some of the tile pieces Koop and volunteers worked with. // Photo by Rebecca Koop

“There are two kinds: there’s bathroom tile, indoor tile, and it might be in your shower, but it wouldn’t hold up if it were outdoors exposed to freezing and thawing, absorbing water, and would crumble and fall apart,” Koop continues. “So, I had to refine my search to stoneware or porcelain tile, which is a lot harder and will hold up to that. The last thing I want to do is put all this time into it and then have some of the tiles start crumbling over the years.”

After Koop was sure she had enough tiles and the design was complete, she had to get her “canvas” ready. She designed the mosaic to fill the space on the front of her pottery studio, Back Door Pottery [3922 St. John Avenue]. The studio she purchased in 1980, which had once been an auto-repair shop, had less-than-desirable siding. In 2017, Koop had the siding and old stucco removed which finally revealed a blank canvas for her to sketch her mural and begin to place tiles.

Koop’s studio before removing the siding. // Photo by Rebecca Koop

While the building looked choppy in the beginning, with its worn, sheet-metal siding, the domed shape of the building is what inspired Koop’s design for the mural.

“It was the shape of the building that first really inspired me to the topic that I wanted to use, which was the Earth,” says Koop “A potter works with the Earth’s clays all the time and I’m a gardener as well. It’s a great thing, but there’s a curve to the parapet wall on the front side of the building that just landed really well for that arched section of the earth, and then following that with stripes of colors which became the spectrum or rainbow.” 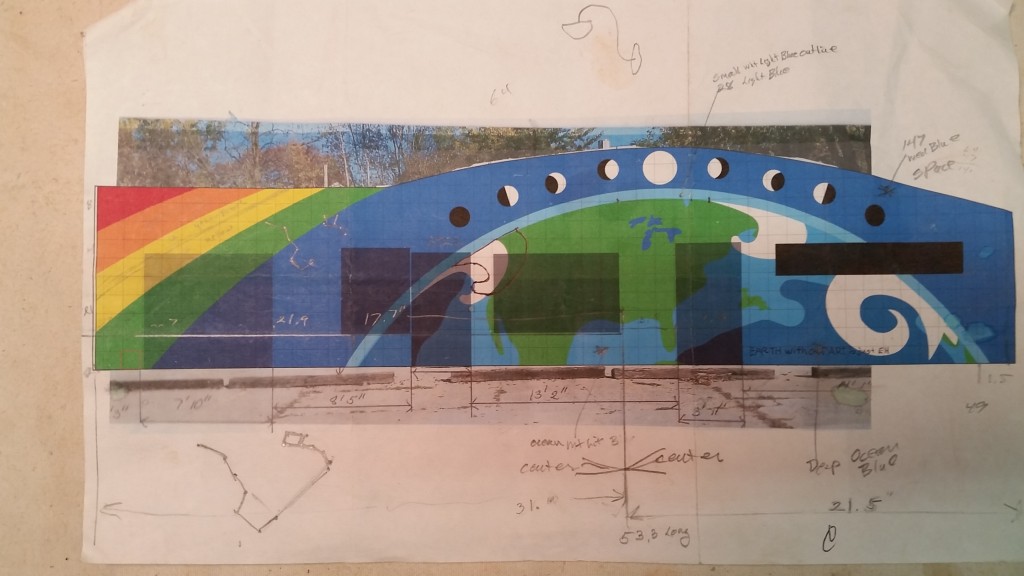 Koop’s original sketch, or “cartoon” of the mosaic. // Photo by Rebecca Koop

From the beginning, Koop was passionate about making the mosaic project a community effort, so when the time came to begin placing the mosaic tiles, she called for volunteers to help.

“Every Wednesday evening from 6 to 9 p.m. I invited the neighbors, basically a Facebook call for anyone who wanted to volunteer, and I called it, “Make your mark on my wall.” So I had a number of volunteers,” says Koop. “I had close to 50 volunteers over that time. So they would spend the evening, tiling all the cartoons or installing the tile, crafting it, and then sealing the tile. So I did have help and that was over about 600 hours of volunteer time.”

Koop says that while a lot of the volunteers were close friends that were also artists, many of them were community members and neighbors. One couple even drove all the way from Warrensburg to make their mark on the mosaic after seeing Koop’s Facebook post. 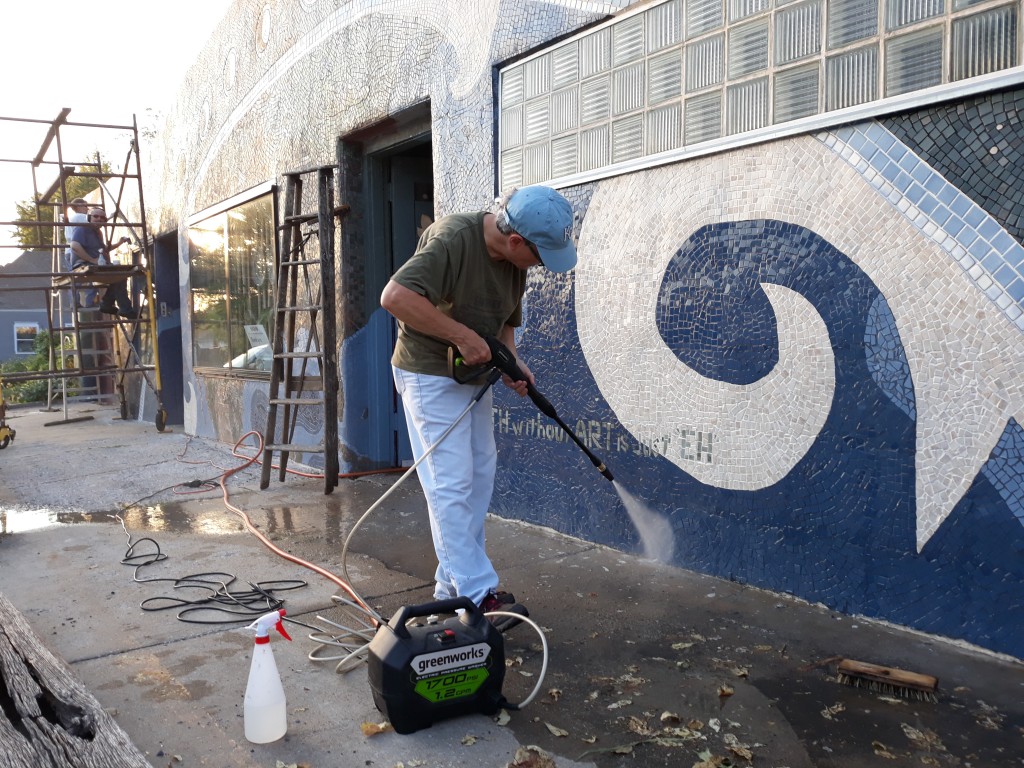 Teri James, one of the many volunteers, power washes the wall before adding sealant. // Photo by Rebecca Koop

During winter months or bad weather, Koop and volunteers would cut and assemble mosaic pieces indoors by sticking them to a mesh that was later transferred to the walls outdoors.

The event is open to the public and will be held on Earth Day (April 22) with a rain date of the 24th from 5-8 p.m. There will be live music, a bonfire, an Eleos Coffee truck, and complimentary hot dogs to roast. Koop says attendees are also welcome to bring other things (like s’more supplies) to roast.

For more information or updates on the event, visit the Back Door Pottery Facebook page.