After a 180, a prime Westport spot becomes Beer Kitchen No. 1 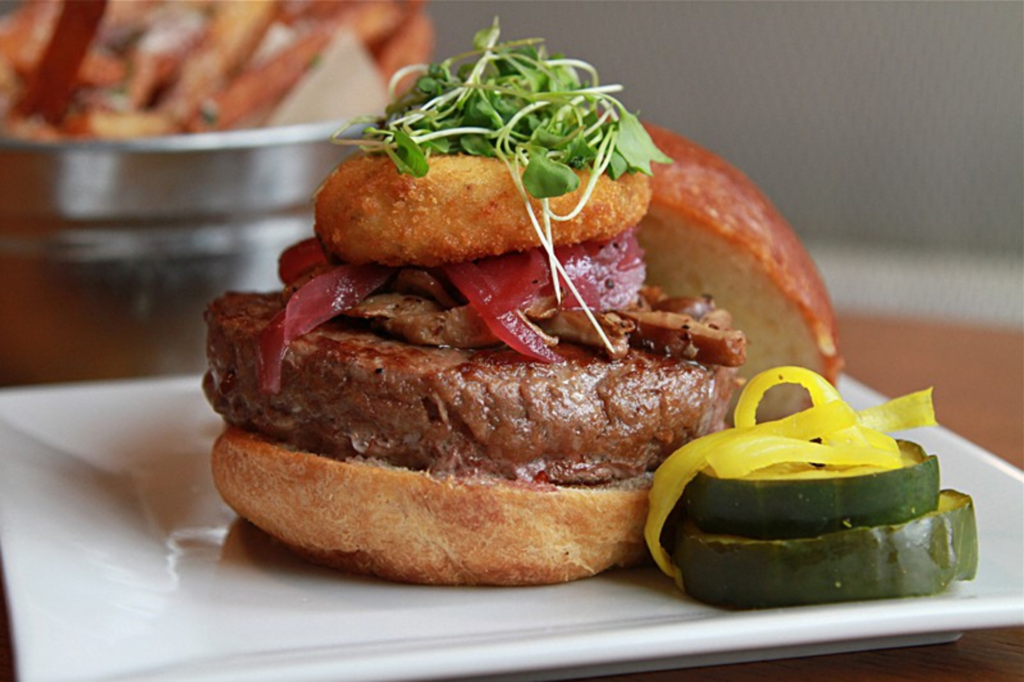 When a friend of mine heard that local restaurateurs James Westphal and Mark Kelpe — creators of McCoy’s Public House and the Foundry, among others — planned to change the concept of One80, their four-year-old restaurant, he knew what to name the new place.

I rolled my eyes at the time. But now, after tasting a couple of really first-rate vegetarian dishes at Westphal and Kelpe’s new restaurant, the four-month-old Beer Kitchen No. 1, I’m thinking that my friend might be onto something.

I have to give Westphal and Kelpe credit for taking a gamble and turning One80, an upscale watering hole, into something much more comfortable and laid-back. Whereas One80 was sleek and shiny (skinny amber lights over the bar, a modular assemblage of metallic convex lenses that suggested a Logan’s Run happy hour), the Beer Kitchen exudes a roughneck, roadhouse appeal.

The dining room gives off a vitality that I never felt at One80. Some of the updated space’s eccentricities irk, though. The afternoon that I ate lunch with Peter and Crystal, the piped-in music was an unceasing Michael Jackson retro­spective, dating back to his 1979 hit, “Don’t Stop ‘Til You Get Enough.” Hey, I love the late king of pop, but in this instance, I did get enough.

The dining room that day was filled with men: businessmen in suits, blue-collar workers, and at least one very stylish (and gay) event planner. In this crowd, Crystal stood out. But she liked the attention. And she liked the menu, which had more than a couple of options for vegetarians like her. An “Eat Your Veggies” section has six vegetable choices — roasted garlic and sauteed spinach being more vegetarian-friendly than the honey-bacon-glazed Brussels sprouts — that can be ordered in samples of three for $8.

Crystal went for the vegetarian shepherd’s pie, and I was intrigued when the server brought it out. The dish looked convincingly like the classic beef or lamb version, with its fluffy blanket of whipped potatoes. It was a hefty, carnivore-sized portion, and Crystal wound up taking much of the casserole home. The robust shiitake-­mushroom gravy gave the braised parsnips, carrots, potatoes and peas so much solid flavor, that the effect was almost like eating beefsteak.

The Beer Garden’s beef is a blend of McGoni­gle’s brisket, short rib and chuck tenderloin, but Peter chose the decidedly beefless Tur-Duck-En — one of the odder offerings on the list of “Premium Burgers.” It’s a chicken burger topped with turkey bacon — too limp, too salty — and a spoonful of duck confit. A slice of fontina cheese and a smear of red-onion jam on the brioche bun complete a dish that’s as insanely rich as it sounds. Eat one with a small portion of the truffle-parmesan fries, and you’re practically begging for a heart attack.

I was tempted to order one of the Beer Kitchen’s “build your own” mac-and-cheese plates, but the pileup of available components (among them barbecued burnt ends and that duck confit again) threatened to overwhelm the basic three-cheese pasta dish before it could even be ordered. Well, I was overwhelmed, so I ordered something else entirely: a Reuben. The menu describes an enticing take on the classic sandwich, with “8-hour slow-braised corned beef” and “beer-braised kraut.” I wish it had lived up to my expectations. The meat and toppings were tasty if not outstanding, but Beer Kitchen crippled its Reuben by putting it on the blandest rye I’ve ever tasted, some Protestant version with none of the punchy bite of delicatessen-style bread. (The server assured me that it really was rye, but he confided that other customers had complained, too.)

It’s an uncharacteristic misstep for a place that’s trying hard to avoid blandness — and mostly succeeding. Unexpected touches elevate this joint. The sandwiches come with crunchy house-made pickles, and the comfort-food staples are very good. An “oven fried” chicken, coated in crushed cornflakes, really does taste like something my mother used to make.

The vegetarian meatloaf almost passes for the real thing. I answered a dare to eat that particular dish, having recently carped about the paucity of good, or even edible, meatloaf in this city. (It’s usually dry or flavorless or dripping with trashy, shiny gravy — or all of these.) A meatless meatloaf? That sounded to me like adding insult to injury, or a novelty at best. But what Beer Kitchen calls “Veggie Cheatloaf” is moist and hearty. Concocted from mashed chickpeas, quinoa, garlic, onion and egg, it’s flavorful and — vegetarians, turn away now — meaty. The chipotle-tomato glaze gives it an extra kick, though the “crispy fried jalapeño straws” served atop the loaf work better as decoration, being neither crisp nor jalapeño-hot.

Far from quinoa and chickpeas, the beer-braised short ribs are outstanding, and they can be had as a full meal or in a grilled sandwich. When I returned for dinner with Carol Ann, she loved the sandwich version: a hunk of gorgeously tender meat piled on sourdough — this bread is the real thing — with a bit of smoky gouda, caramelized onions, a slice of oven-dried tomato, fresh and spicy arugula, and a discreetly sassy horseradish aioli.

We ate too many fries (the truffle-parmesan version again, though there are other variations, including a ridiculously louche gorgonzola-topped affair), so I refused to let the server even tell us about dessert. I might have fallen asleep on the drive home.

The day I lunched at Beer Kitchen with Joseph, we sat under the green chalkboard that lists the available beers by name and price and alcohol content. (The selection rotates frequently, servers say.) He ordered a potent (and expensive) import, but a few sips of the ale made him fearful of falling asleep at his desk. After another look at the board and its percentages, he switched to a soft drink.

Our waitress wasn’t afraid to name names when we asked which dishes she liked and which hadn’t yet, for her, passed muster. (Some restaurant patrons don’t appreciate this brashness, but I do.) With her help, I fell in love with the yeasty pretzel twists on the starters menu, though the smoked-gouda “fondue” — let’s just call it a sauce, OK? — was disappointingly weak. That day’s soup special, a dense sweet-potato bisque, was so teeth-gratingly sweet that it would have made a better dessert topping than a potage.

The Brickhouse burger, however, was just right: a hefty patty with crisp bacon, aged cheddar and a stack of fried potato chips on top. Yeah, it’s snazzy bar food and a tad salty. (Tavern owners have for generations ensured their patrons’ constant and profitable thirst with this gambit.) But it’s very good, even soothing. And you can get it late. The bar stays open into the wee hours, and the kitchen is open until 1 a.m.