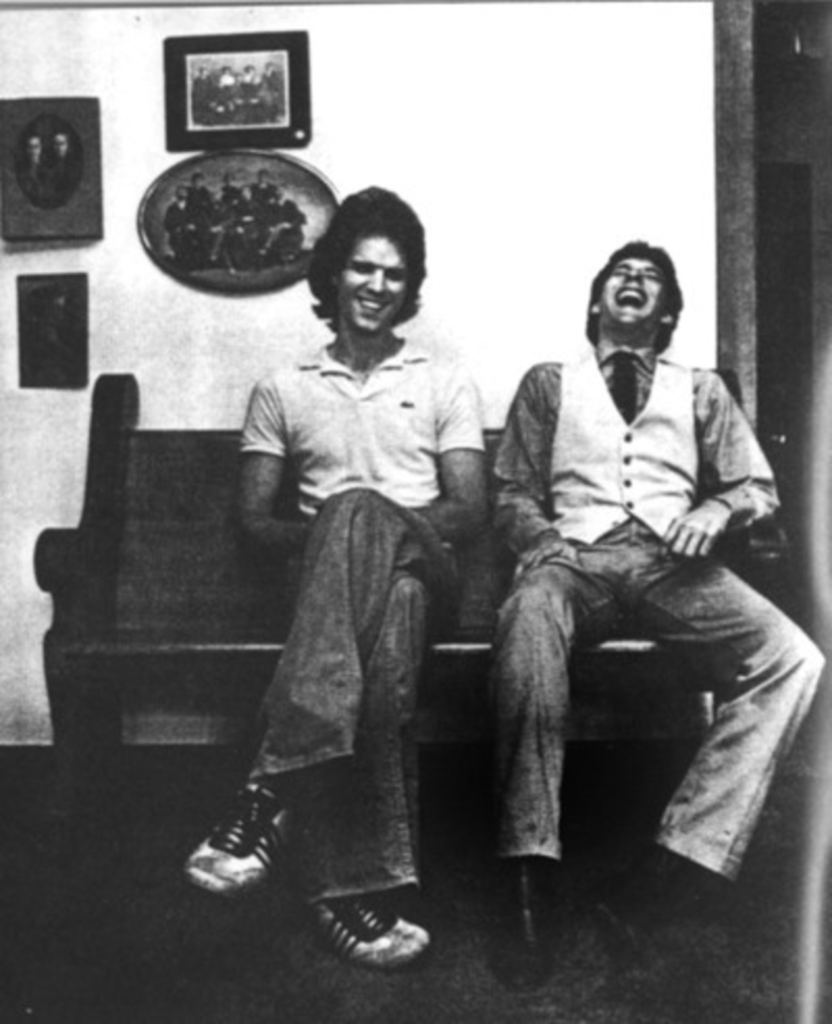 If there is a god of Midwestern power pop, then the little, bug-eyed deity, with its crown of tumbling curls, its nicotine-yellowed fingers and Jeff Lynne shades, has spent most of the past 20 years in Kansas City. Specifically in P.O. Box 5443. Around 1981, appeals to the little god began trickling to this post office near 75th Street and Troost. The paper sacraments would evoke forgotten names — Gary Charlson, Arlis Peach — praising their greatness and asking for other relics of the Titan Records legacy.

Though Titan Records was active for only four years (1977-81), releasing six singles and one sampler LP, enough of this tight, catchy, vocal-harmony-driven rock got out into the world and caught people’s attention.

There was the Gems’ relaxed “Save Your Money,” with its ringing harmonic-chord intro and singer J.P. McClain’s gulping up of syllables like Elvis Costello with a head cold. And Gary Charlson’s cover of the obscure Dwight Twilley song “Shark ” had a winning, made-to-be-a-sports-anthem chorus.

Or how about the Boys, Titan’s most flamboyant bunch — would this quartet of Nebraska glam lads have been famous rock stars if they’d come from a coast instead of the heartland? The Boys’ record “(Baby) It’s You” b/w “Bad Little Girl,” released in December 1979, is a Rambo knife of a single. The smooth and sharp A-side makes reference to the Zombies with “Time of the Season” vocal percussives — albeit slightly more drunk. The serrated B-side is fast and punky, with searing dual-guitar leads.

It’s no wonder that, after Titan’s collapse, record collectors wanted to buy in, even as most of the artists drifted even deeper into obscurity. Disciples the world over had given their souls to that Kansas City sound.

Like Cheap Trick’s promise fulfilled, they wanted it, and it wanted them. In a time when punk and new wave dominated the indie scene and album rock trampled the FM dial, Titan’s brand of Beatles-influenced pop-rock was as unpopular as the 45 record itself — an outdated, unsellable format, a Chiclet among Big Hunks.

Over the years, though, enough orders came in to P.O. Box 5443, and enough labels showed interest in rereleasing the music (not to mention all those unreleased reels of tape). Titan’s founders, Tom Sorrells and Mark Prellberg — the heroes of our tale, now in their 50s — saw that, finally, 30 years after that first single, a real market had sprung.

Sorrells’ and Prellberg’s Nuggets-style dream has come true in the form of Titan: It’s All Pop!, a sterling 43-track, two-CD box chock-full of liner notes and artwork. It was released on November 4 by Chicago’s Numero Group, an up-and-coming label devoted to digging up obscure gold from the past and spreading the wealth.

When asked to recall the first time they met, Sorrells and Prellberg (both of whom possess long, don’t-give-a-fuck manes of gray hair) sound every bit like old brothers asked to remember an incident that one still finds amusing and the other is sick to death of hearing.

“Tell him about that story of how we first met,” Sorrells says.

“Aw, nah, there’s no need to go into that,” Prellberg replies.

“You can tell him if you want to.”

“I was living in Portland, Oregon.” Sorrells pauses, easing back to the days when he dealt vinyl out west. “And he wanted a record — what was it, a Who record? — for, like, three dollars. And the check bounced, and then he complained because the record had surface noise. That was actually our first correspondence. In, like, 1973.”

Sorrells goes on, telling how the next year, he moved back home to Kansas City (St. Joseph, actually, to live with his mom), and Prellberg came over with a box of 45s and …

No, wait, Prellberg says, he didn’t go to the house — they first met when Sorrells came into Love Records in downtown Overland Park in 1976.

“That’s when we first met in person — when you walked into the store. You didn’t know I was there; I didn’t know you were coming in.”

“I didn’t know what you looked like, so how would I have known it was you?”

“I was playing a Raspberries record.”

United by fate, the two pop fans and vinyl addicts began dreaming up a zine, Teen Titan, that would not only cover under-the-radar Midwestern bands but would also do stories on ’60s garage and psych groups like Chesmann Square. The first issue was almost ready to go when Prellberg met Charlson, who was playing in a Kansas City, Kansas, cover band. Before long, the two were in Chapman Studios, laying down Charlson’s “Real Life Saver.”

Sorrells had no idea what Prellberg was up to. “I was young and impulsive,” Prellberg says. But Sorrells signed on, and the cool, swaggering “Real Life Saver” (b/w “Not the Way It Seems”) became the first Titan release.

It also became the first in a series of brilliantly recorded, artfully packaged, money-losing records.

“We’ve always been out of sorts with the rest of the world,” Sorrells says. “We just did what we liked.”

That did not include marketing. It did include fastidious attention to detail through every part of the process, from recording the record to hand-pasting the sleeve.

Prellberg says it best in his introduction to the liner notes of It’s All Pop: “Every disc we released went into the red, each a certifiable commercial and financial disaster. Lay the blame on our insistence upon getting it right. Each single had to have a deluxe picture sleeve included. The final mixed master had to have a hot, full sound. We were never clock watchers at the recording sessions, never concerned about going over budget. Budget? What budget? There was no such thing at Titan — everything cost what it cost.”

In a sense, Titan — intentionally or not — sacrificed success for legacy. Though they couldn’t sell a record at home, Sorrells and Prellberg ended up with a pristine history of a scene, in richly mastered sound.

The story caught the ears of Ken Shipley, president of Numero Group. Shipley first called Sorrells in 2005. At the time (actually, for about 10 years), Sorrells had been trying to work out a deal with Get Hip Records in Pittsburgh to release Titan’s catalog on CD. Sorrells hadn’t heard of Numero and blew Shipley off.

Fortunately, Shipley didn’t give up. The next year, he met a friend of Prellberg’s. Rich Haupt of Rockadelic Records in Texas encouraged Shipley to give Titan another try, this time via Prellberg. From there, it was only about a year before It’s All Pop! was completed.

Why would a Chicago label be interested in Kansas City-area music? Shipley cites his label’s mission.

“The Numero Group basically specializes in telling the stories of specific scenes,” he says. “Titan had a really great story, because any story with failure in it is a good story.”

But, Shipley adds, Titan had musical vision, spared no expenses on recording, and had a roster of good songwriters.

When he listens to Arlis Peach, Shipley says, “I hear a cheap version of Boston. With a different label, a different push, who knows what might have happened.”

Sorrells and Prellberg are certainly glad that their recordings will be available not only to longtime fans of this particular music but also to a new generation.

“We want them to be as ecstatic over it as we were when we first heard it,” Prellberg says.

The Titan titans will be on hand from 4 to 7 p.m. Saturday at the Record Bar, spinning tunes and swapping stories. A portion of the proceeds from the sales of It’s All Pop! will go to Abigail Henderson’s Apocalypse Meow fund.

And if folks don’t dig on Titan this time around, well, God help ’em.