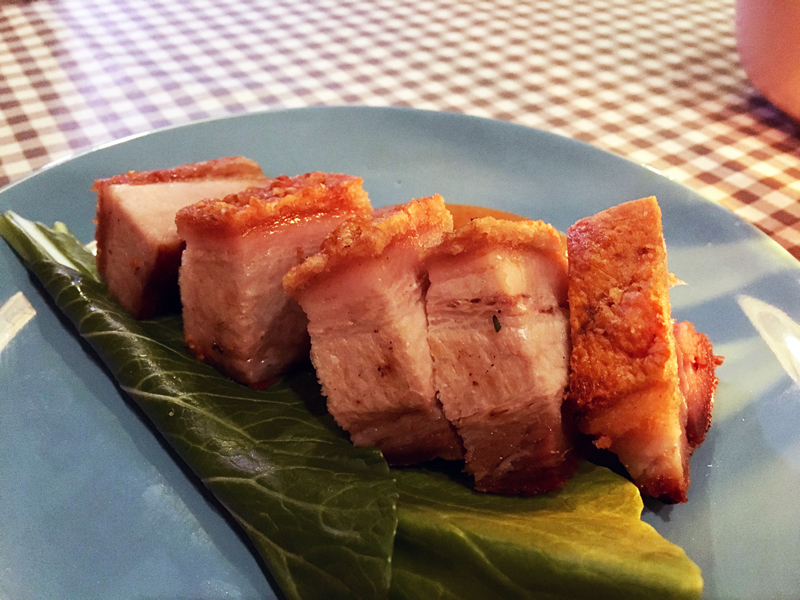 It is immediately apparent that the new Thai restaurant Aep (1815 West 39th Street), open since early December in the former Thomas space, is not your average, Americanized spot for phad Thai and spring rolls. Owned by seasoned KC industry vets Jakob Polaco and Adam Northcraft (Polaco is formerly of the American and the Rieger; Northcraft is the former co-owner of Alex Pope’s Local Pig), the restaurant centers on authentic Thai street food, given modern American presentation and service (no phad Thai or spring rolls).

Aep feels larger and more open space than Thomas, though the cosmetic changes to the space are subtle. Polaco and Northcraft have removed the large room divider that separated the bar from the dining room. Bright hues dominate, with one wall festooned in leafy wallpaper, and colorful tablecloths further brighten the space. 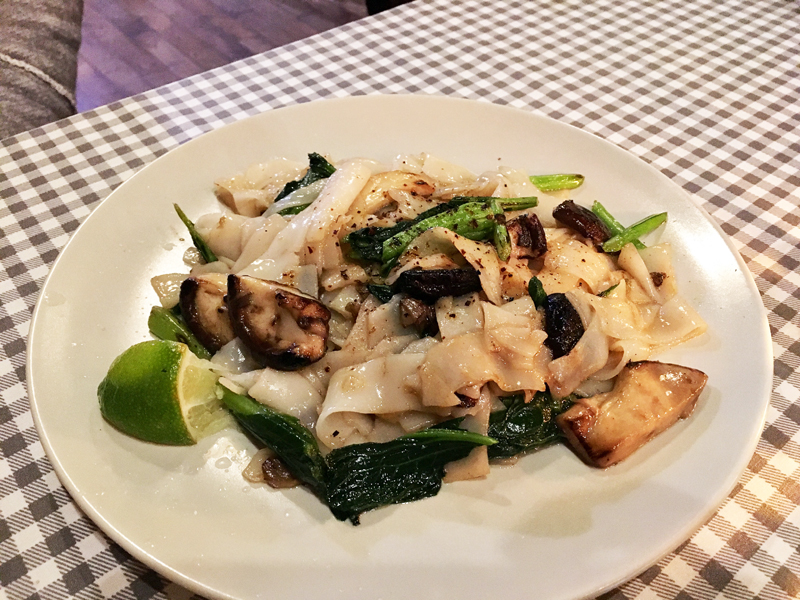 Aep (pronounced ape) is a cooking technique that involves wrapping food in banana leaves and heating it over charcoal. The fillings can be a surprise — a notion that the menu here emphasizes. There are just four starters, five entrées and a few desserts, and none of them sound very familiar; last week, available entrées included jin room neua, naem and phat see ew. But by any name, what arrives at the table resembles familiar comfort foods, rendered with heavy (and tasty) Thai influence. The jin room neua (pronounced gin room new-a), for example, is a braised-beef dish served in a savory beef broth with a soft-poached egg, spring onions, cilantro and sticky rice. It’s stick-to-your-ribs Thai pot roast, ideal for winter.

Naem here features house-made isaan, a fermented sausage that I expected to be firm like a Spanish chorizo but came out with the look and texture of a bratwurst — one served with rice noodles and a shredded-vegetable salad. The sausage’s fermentation leaves it faintly sour — somewhat like sauerkraut or kimchi — but the flavors are accessible, and the dish is good. Another admirable option is the forest-mushroom phat see ew — a vegan stir fry made with Chinese broccoli, wide-rice noodles and generous chunks of sautéed forest mushrooms. The menu on my visit also included a spring-chicken dish served with a papaya salad and sticky rice (gai yang), and catfish with long beans and sticky rice (laap pla duk).

Aep runs a happy hour from 5 to 7 p.m. every day (including Saturday), with specials on appetizers (including crispy pork belly) and cocktails. In January, Aep plans to expand its service from dinner-only to include lunch every day. Its new hours are 11 a.m. to 10 p.m. Monday through Friday, and 10 a.m. to 10 p.m. on Saturday.

Say goodbye to Barrel 31. The two-and-a-half-year-old establishment closes its Martini Corner doors for good on January 8. Purchased from Chris Ridler by Tyler Humar, the space will reopen in about a month as Brick House, which will serve burgers, Philly cheesesteaks, grilled cheeses and handmade appetizers to go with an array of canned beers. The business plan includes bocce ball on the back patio, as well as giant Jenga.

Humar, a real estate agent with Better Homes & Gardens, says he’s had this idea for a while. When the opportunity to take over Barrel 31 presented itself, he was in. “I just kind of got the itch to run a restaurant,” he says.

During the month he has dedicated to turnover, Humar plans a few cosmetic changes to the restaurant, including the addition of more screens inside and improvements to the restaurant’s large patio, one of the space’s prime assets. The high tops out back will go away, and in their place will be wooden picnic tables for group seating. Perhaps most noticeable at first will be the 20-foot-long fire “pit” (more like a trough), which Humar is already at work installing.

While Humar plans to stock a lot of canned beer, a full range of drinks is in the works, including beer on tap as well as cocktails.

“We’re looking for a mix of the Velvet Dog and what it is now,” he says. “We want it to be a fun place that everyone can afford.”

Speaking of rebranding, the restaurant formerly known as Edokko (8615 Hauser Court, Lenexa) has reopened as Aso Sushi. The restaurant primarily serves sushi but also takes a go at teriyaki and noodle dishes, including soba and ramen.

File under Why not?: With January maybe moving a little slowly, this could be the night you try a murder-mystery dinner at the Silver Heart Inn Bed & Breakfast (1114 South Noland Road, Independence). A $29 ticket covers your meal and participation in the mystery, set on New Year’s Eve 1955, at the fictional Pitz Supper Club. Buy your tickets at silverheartinn.com or call 816-838-9508.

Spend a morning learning how to make a naked cake. A class today at the Culinary Center of Kansas City (7920 Santa Fe Drive, Overland Park) teaches you how to make that layered confection without frosting on the sides. You’ll learn how to create a proper structure for the cake itself, as well as how to prepare frostings and fillings, and techniques for shaving and molding chocolate. The class is $55; register via the Culinary Center’s website.

If you are feeling in need of some lighter fare after the bingey holidays, embark on a three-day soup detox with recipes and skills picked up at a class at the Merc (901 Iowa Street, Lawrence). On the agenda: four simple, purportedly “immune boosting” vegetable soups meant to sustain you during your detox. Registration is available on the Merc’s website, and the class is $22.