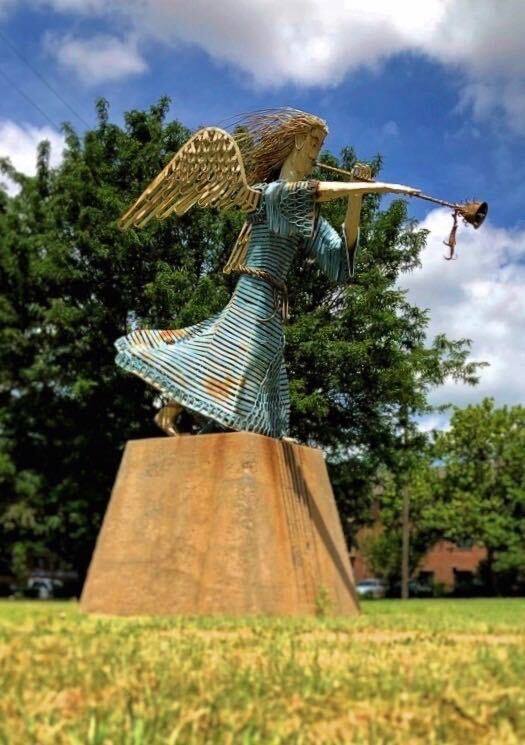 As with so many other events this summer, the annual Ad Astra Music Festival in Russell has moved online. While this means that the western Kansas town will not see an influx of artists and arts fans, it means that those of here on the eastern edge of the state–and around the world–now have an opportunity to catch some very intriguing musical events.

The festival just wrapped up its opening weekend, which included Young Artists at Home, a performance featuring “the undergraduate voice students of the Ad Astra young artist program […] sharing their voices from their own living rooms,” as well as composer’s Andrew Rodriguez new work, “Scattered Inheritance,” composed especially for Ad Astra. The second and closing weekend, which takes place this Friday, July 24, and Saturday, July 25, is also the most intriguing. The closing performance on Saturday is a sneak peek at the Trudey Furney Opera, commissioned from composer Anna Pidgorna and librettist Maria Reva.

For those unfamiliar with Furney, she was a longtime art teacher at Russell High School, who passed away in 1991. The latter years of her life have become a source of fascination for many, given her falling in with writer Donna R. Butts, whose 1983 book with S. Scott Corder, M.D., UFO Contact: The Four, purports to tell the story of the abduction of four area women (including Butts) by aliens, who “described and explained some past events in our history, both Biblical and historical, and then predicted a number of future events to be reported publicly now so that when they do in fact happen, those events will tend to confirm this story and its significance to our own future.”

Yup. For real. Furney is perhaps best known for the piece of art which sits in Russell’s Lincoln Park. Known locally as the Angel in the Park, the sculpture–whose official title is “Seventh Trumpet”–is an angel blowing a trumpet, constructed out of iron and steel, and featured the following inscription of the back, taken from Revelation 11:15: “The Kingdom of the world has become/ the Kingdom of our Lord and his christ/ and he shall reign forever and ever.”

It’s a heady mix for an opera. While Pidgorna and Reva’s work won’t premiere in full until next year’s Prairiesta, the “every 10-year celebration of the history, heritage and culture of Russell, Kansas,” this Saturday’s preview should definitely whet the appetite of culture lovers everywhere. I reached out to the Ad Astra Music Festival’s founder, Alex Underwood, by phone to ask all about the project, and my first question was to see just how Furneey is viewed in Russell itself.

“She definitely is a beloved figure in Russell,” Underwood replies. “Mostly just because of her major impact on a bunch of students. Over her nearly 30 year-long art teaching career, she inspired tons of people who are now professional artists or very serious hobbyists.”

Underwood admits that the last chapter of Furney’s life is a complicated topic in Russell and one that comes with some shame and embarrassment from people who were so fond of her. People really loved Furney and looked up to her, he says.

“As in any sort of small-town, there would be a lot of hushed conversation about it,” Underwood admits. “That’s some 30 years ago now, and I think that our goal here is to help bring some reconciliation, in a way, or a little bit of just understanding as to this. We’re just hoping for a universal telling of her life story.”

Pidgorna and Reva were first approached in the spring of 2017, and Underwood describes it as a huge undertaking and certainly the most ambitious undertaking that the festival has ever done. I agree, and ask as to why the festival decided to commission a full opera when it did, with the Ad Astra Music Festival having only started in 2014.

“Our team definitely has our eyes on what the future of the festival will look like, and hope to really grow it and strengthen it,” replies Underwood. “We really felt like this was a great way to do that.”

It also plays into this community celebration that will happen in 2021, called Prairiesta. It’s a celebration of Russell’s history which happens every ten years in June. As Underwood explains, the history of Russell is usually told in an old-fashioned formal outdoor pageant.

“We have basically reframed the way we’re going to tell the history of Russell going forward,” Underwood continues. “The festival is incorporating itself into Prairiesta in this fashion, by telling these individual stories.”