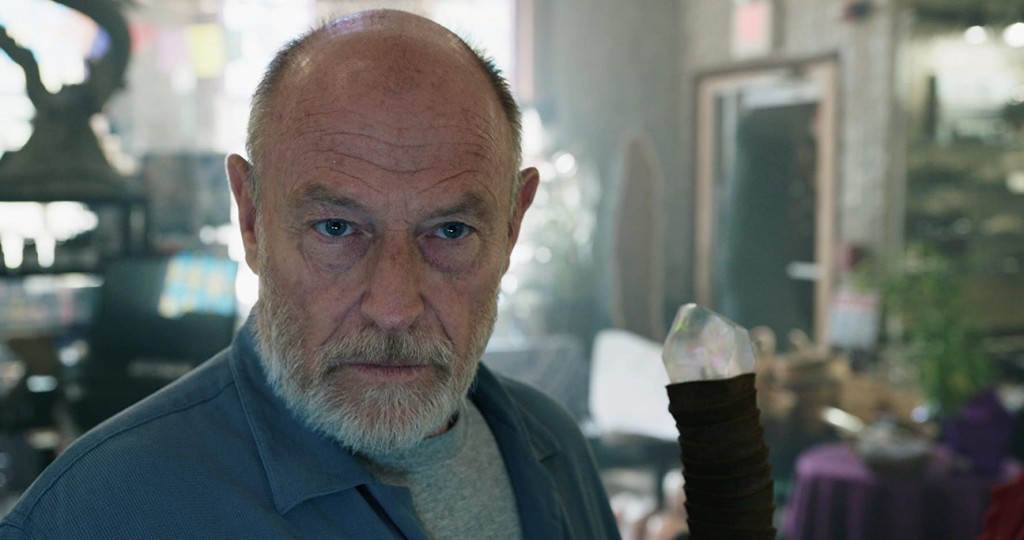 Corbin Bernsen in A Deadly Legend.

Depending on your age, actor Corbin Bernsen might mean something different to you. Maybe it’s Arnold Becker in L.A. Law, Roger Dorn in the Major League franchise, or Psych‘s Henry Spencer. Maybe you like your deep cuts and recognize him from the horror anthology Tales from the Hood or Amazon’s American Gods, but suffice it to say, the man has had one heck of a lengthy career, and within his roles, there are multitudes.

Last week saw Bernsen’s most recent release, director Pamela Moriarty’s Hudson Valley-set and lensed feature, A Deadly Legend, in which the actor plays Matthias Leary, owner of a New Age store who seems to know a lot about what’s going on as things turn awry during the opening of a new real estate development. It’s an interesting turn for Bernsen after a series of Christian-themed features the last few years–he wrote and directed Christian Mingle, among others–so I was really excited to hop on the phone and see just how this all came about. 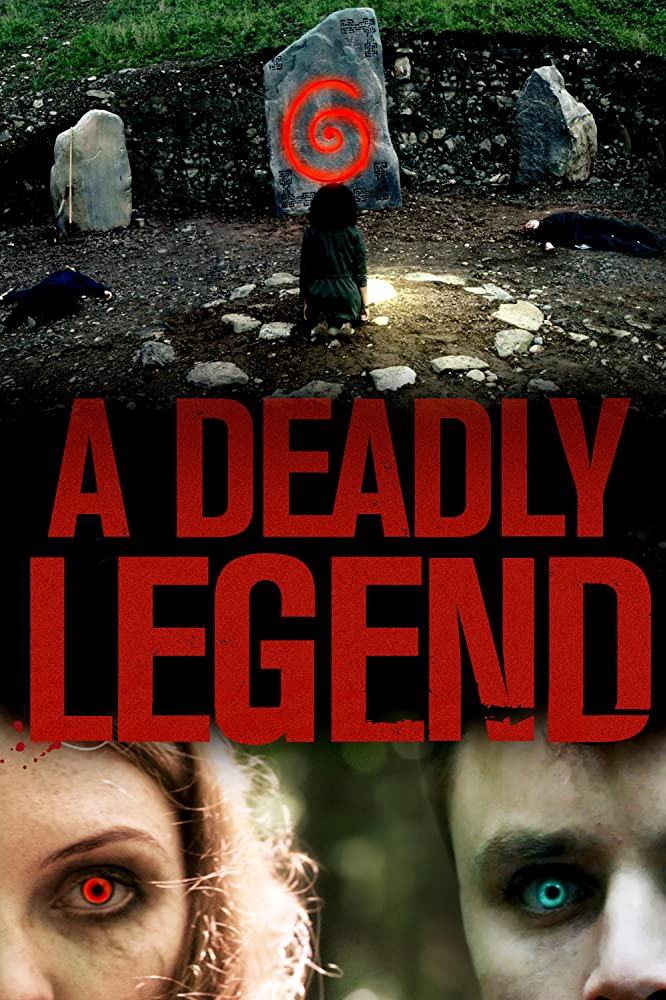 The Pitch: How did you get involved with A Deadly Legend?

Corbin Bernsen: I just moved up to the Hudson Valley region in upstate New York a couple of years ago. I heard there was sort of a burgeoning film community up there and I immediately reached out to some of the local film people. The next day, I got a phone call and they said, “Hey, there’s a movie being shot here. They’d love to have you in the movie: would you be interested?” I said, “Send me a script, let me talk to the people involved,” and there you got it.

According to an article I read in the Poughkeepsie Journal, you live in Dutchess County and Judd Hirsch–who’s in the film, as well–is also a resident of the Hudson Valley area as well. What’s the appeal of living up there?

That’s right, we’re smart ones: we know where it’s at. One is its pure beauty. It’s great–nature and the Hudson River, which is extraordinary, but also you’re a couple of hours from New York City, and for me, there is this growing film community up there that is appealing. Some great projects: a Mark Ruffalo project, I Know This Much Is True that we shot up there, so there’s a lot of people coming up there to film.

You’ve done quite a few different horror projects over the years. What attracted you to A Deadly Legend?

Well, my first attraction was coming up there and shooting a film about that area, but then I did read the script and I saw a good playbook for a good game if you will. Then, the character was interesting. This guy is around who knows the legend and has to sort of be an antagonist and hide a secret–I don’t want to give away too much, here, but he hides a few secrets along the way and then [the viewer] discovers them at the end. I thought there was validity to the character and challenges to the character.

To be honest with you, when I read sci-fi scripts, it’s so hard for me to tell if they’re gonna turn out great. I could read Alien, I could read Avatar, but you just don’t know, because there’s so much that goes into it in post-production. But, you know, the story–which is what you look for–it was a good story. It was a solid story. It wasn’t an original story–people want to develop land that has other things going on. But while there are no original stories, does that story hold up? It did in the script.

Right. And then the job that I have in those films is to not give it all away. The audience needs to discover it, but you’ve got to be there with the knowledge of what it is and it’s an acting challenge to not just give away the plot. You can’t give it away: you just got to release little bits of it. You have to hold back certain knowledge.

I find it absolutely fascinating that you have had a career that has been going for 40 years now. There’s always talk of people having second and third acts but you’re still in your first. You’ve never stopped working and you’ve continually landed on some really popular series, going all the way back to L.A. Law and moving all the way through to Psych, which just aired its second movie.

I’m not skeptical, and I’m concerned with everything that’s going on, but I feel like I want to do one more eight-year series. I’d love to do one more, on several levels. One is I don’t have the responsibilities of a family and having to feed everybody. It can be less about the money and earning a wage than it can about the absolute content. There’s so much to explore now, at 65.

I started Psych when I was 50, so you go 30, 50, 70–it’d be nice to be in the midst of another show that’s exploring that part of life. Again, like I said, it doesn’t have to be the big blown-up thing. It could be smaller. It can be more intimate. I’m actually writing a few ideas to do up in the Hudson Valley.

I feel like I have had two acts, though. I did the L.A. Law/Major League act, then there’s this middle one that was bouncing around to a lot of different things, whether it’s movies like Kiss Kiss Bang Bang, and in and out of different shows–throw American Gods in and all that. That sort of ends with Psych and now I’m in this act three, if you will, where the financial pressures are off, so it can be all for me.

Whether I choose to do it for free or for a dollar, it’s all about me and not agents and the machine that needs to be fed, but more about what I want to do, but also experience.

Speaking of playing to age and knowledge, your role as Vulcan in that first season of American Gods is very much a character with a lot of depth. Given your recent faith-based movies, what was it like playing like a god?

Well – different kind of god. My faith is very personal, and I explored it in the seven or eight movies that I wrote and directed and starred in. It’s a little bit different from and it’s more colorful to me than what some of the people force you to have the content be, if you’re gonna call yourself a Christian movie or a faith-based movie.

I probably pissed a view people off in some of the roles I’ve done. When you say you’re a Christian and you’re making films that are faith-based films and you go off and do something that’s otherworldly–American Gods or otherwise–it kind of confuses people. That’s their problem, not mine, but American Gods? I mean, that’s a different kind of god. It’s not how I view God at all, if you will. Those are more sort of legendary, mythical gods of things like fire. Universal God, universal truth, and universal mystery is much bigger than all of that, but that’s another whole world to explore.

You mentioned briefly the idea of elements that you have to put in a film for it to be considered a faith-based movie. Is there something that explores faith that you would like to do that might not fall straight under “Christian entertainment?”

Yeah, the sort of being – not pissed off or disillusioned – I don’t know the word. The thing is that faith, the way I see it, and however you want to look at God, nature, mystery, or whatever you want to call it is so much bigger than what I feel the straight Christian idea is. When you make those films and you want to be on that shelf at Blockbuster of “faith-based movies,” you pretty much have to toe the line.

It’s like, if you’re going to be on the horror shelf, you got to be horror. I don’t know if you remember Blockbuster but it’s like, “That’s the westerns, that’s the horror, that’s the anime” – it’s very clear. If you want to be on one of those shelves or in that certain place in Walmart, you got to toe the line.

One of the biggest conventions of the faith-based movies genre but is our faith conversion. It’s like, “I’m an alcoholic, my life is terrible, I find God, and I’m okay.” They call them conversion stories: you know, “Come to Jesus and your life is better.”

But, they always want to sanitize it, so it’s like, “Well, he drinks and he smoked cigarettes, but we weren’t going show it. Let’s just say one too many nights in the bar,” but you never show him drunk or plastered, beating his wife, and I just think it makes the result phony.

So, long story short, I sort of moved away from the genre. I’ve written a series called Blind Eye about a Christian cop who finds himself in a world of shit – in a human trafficking story. I show some very desperate times and in a very real way, but he has to work through it with his faith, which is basically ultimately tested as a cop through some of the darkness that he encounters. I’m not exclusively just doing stuff like that. I’m also writing something about an old hippie who never left Woodstock, so I’m all over the map.

A Deadly Legend is available now via on-demand.

To hear our editor discuss Bernstein’s film adaptation of the dating app Christian Mingle, please treat yourself to this AT LENGTH exploration.